First 24 hours in Manila, The Philippines

The Philippines' capital, Manila, has never enjoyed the saintliest of reputations, but amid the traffic chaos and commercialism lies an ambitious city rich in history and character, finds Mark Stratton

For travellers, Manila has never boasted the pizzazz of other Asian cities, such as Bangkok or Tokyo. There is a perception that it’s a little rough around the edges, while a scarcity of direct links from the UK has hardly helped. Now, with Philippine Airlines increasing its Heathrow-Manila service to daily flights, it might be time to look afresh at one of the world’s most underrated capitals.

Admittedly, you might need to take a leap of faith at times if you’re going to embrace the city warts and all. Having started life under 16th-century Spanish rule, what may have begun as a quaint fortified town wrapped around the moon-shaped Manila Bay has long since been overtaken by urban expansion. The capital is currently joined with 16 other surrounding cities to form the sprawling, fast-paced Metro Manila – an imposing prospect. 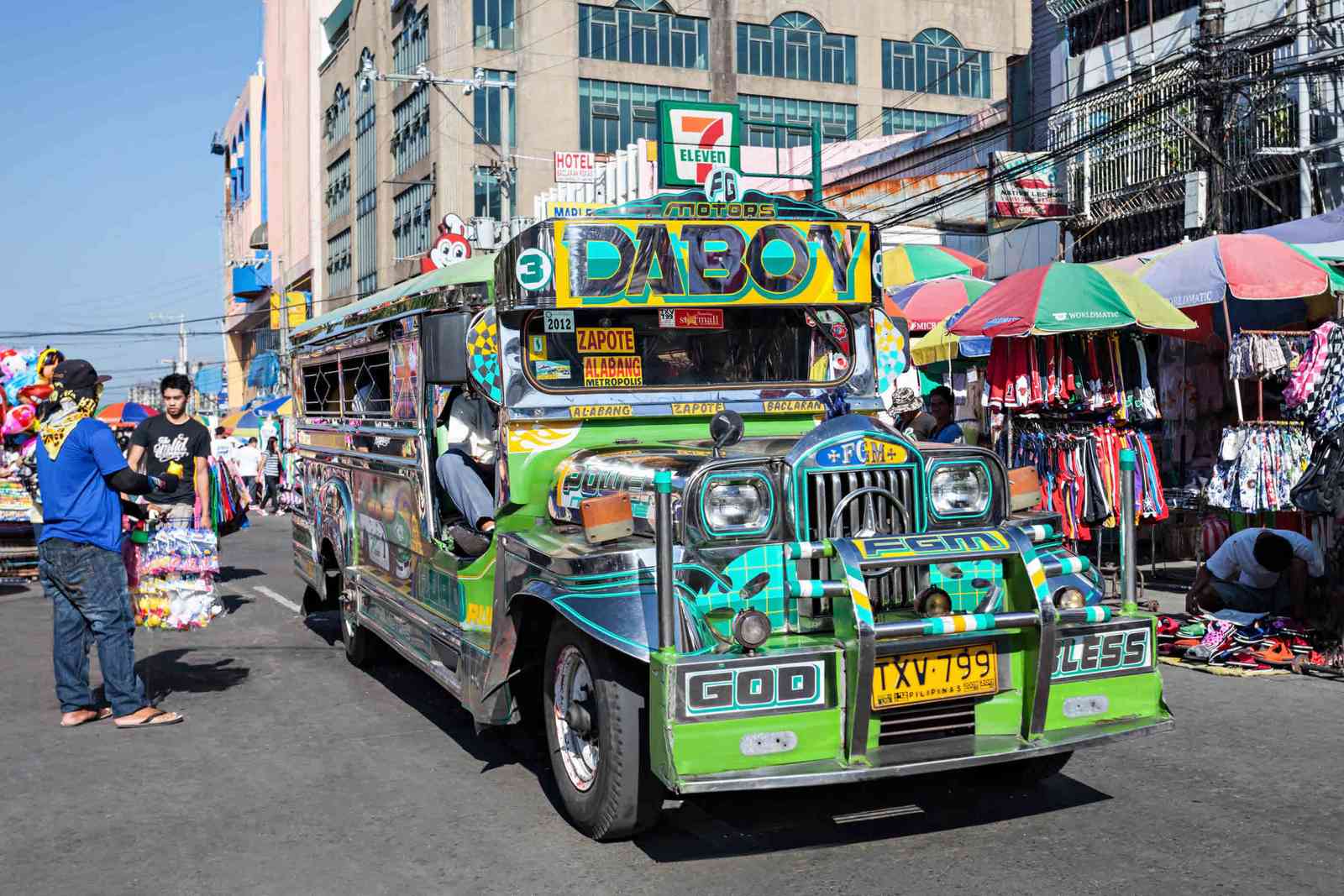 The only way to see the city is to dive in and swim with its dysfunctional tide. At least there are plenty of air-conditioned megamalls at hand if you need a lifebuoy. Yes, it’s congested, the climate is humid and the poverty undisguised, but it can still make you smile – not least because of the friendliness of Asia’s most ebullient, outgoing and chatty people.

Food here is a heady mix of Filipino, Chinese and Spanish heritage infused with a sizeable dollop of American culture, all creating a fiercely moreish and much underrated cuisine. On the streets, old Spanish citadels and skyscrapers nestle cheek-byjowl and Catholic fervour is epitomised by the many exuberant processions, especially Holy Week’s vast Procession of the Black Nazarene.

Commercialism, however, tempers any piety and you’re as likely to spot billboards above a crematorium hawking spicy crisps or a church attached to a shopping mall. Still, relief is found in the ageing remains of the original Spanish fort of Intramuros, as you sit and contemplate just how far one city can come in a mere four centuries.

Ninoy Aquino International Airport (NAIA) lies 7km from Manila. The direct flight on Philippine Airlines is around 14 hours, arriving at Terminal 2. Well-staffed immigration desks are efficient and the baggage belts lie just beyond. The currency exchange booths at arrivals also offer competitive rates in comparison with those found downtown.

The latest craze in the capital is Grab (grab.com/ph) – essentially Manila’s answer to Uber. These green logo taxis can be booked via a downloadable app, and a fare from the airport to downtown Ortigas costs around PHP375 (£6). Yellow cabs with running meters and a flag-down fare of PHP70 (£1) also await. A new ‘Premium Airport Bus Service’ costs PHP300 (£4.40) and drops off passengers at most major hotels. 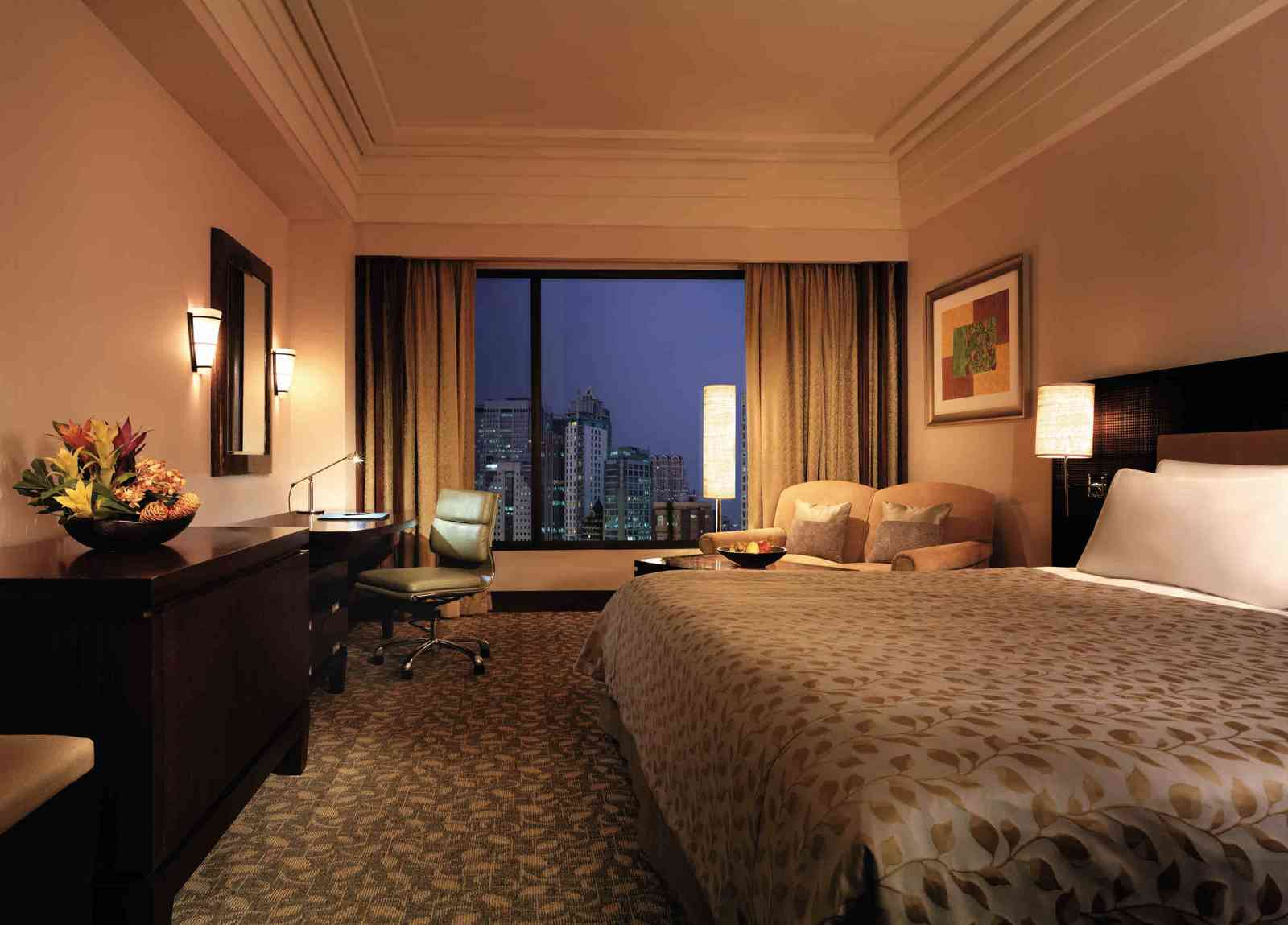 Mid-range: Prices are so competitive in Manila that top-end offerings such as Quezon City’s Crowne Plaza Manila Galleria hardly burn a hole in your wallet. Upper-storey rooms possess imperious views over the hazy cityscape while the fifth-storey outdoor pool is flanked by skyscrapers. B&B doubles from just PHP5,130 (£84.50).

Budget: In the heart of Intramuros, secreted away in a colonial Spanish courtyard, lies White Knight Hotel. Bedrooms boast classical touches and doubles are a bargain, with prices ranging from PHP1,995 (£33). 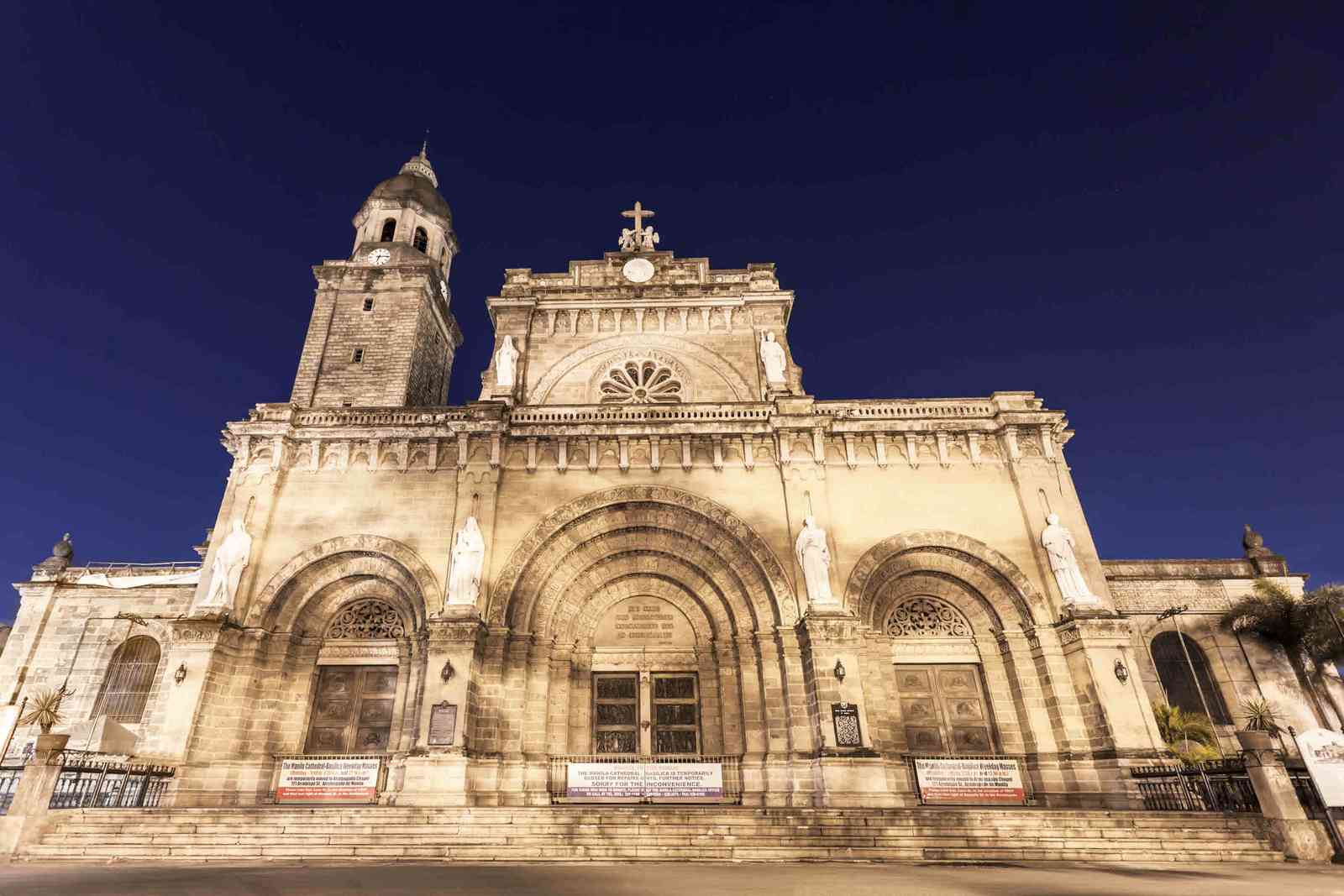 Your first port of call should be the original Spanish fortress of Intramuros.

Inside its walls are a number of colonial gems, including Fort Santiago, which dates from 1571 and commands the Pasig River. Also look for the 16th-century San Agustin Church; its adjacent monasteryturned- museum has an array of religious artefacts, including a huge 3,400kg bell.

Next to Intramuros is Rizal Park (Roxas Boulevard), which contains the National Museum; this fine institution has art and natural history collections as enjoyable as its air-con. From there, a short rickshaw (or even iconic jeepney) ride plunges you into the maelstrom crowds and street markets of the lively Binondo Chinatown. Cool down here with a refreshing halo-halo, a fruity mishmash ice-cream dessert.

With the classics ticked-off, indulge in the Filipino love of ‘malling’ and eating. Both desires can be sated at Ortigas’s SM Megamall (sm-megamall.com) – one of the world’s largest shopping centres. In nearby Kapitolyo, the timeless shabby-chic décor of Café Juanita (19 West Capital Drive) delights, as does its menu of Philippine classics; try pork sinigang, an addictively sour-tasting stew.

For suburban USA meets high-rise Asia, check out designer retail and condo space Bonifacio Global City (bgc.com.ph). Then hop to Greenbelt Mall in Makati to soak in the contrast between its lively restaurant-bar scene and the sound of a Catholic service in full voice at the area’s stylish Sto. Niño de Paz Chapel. 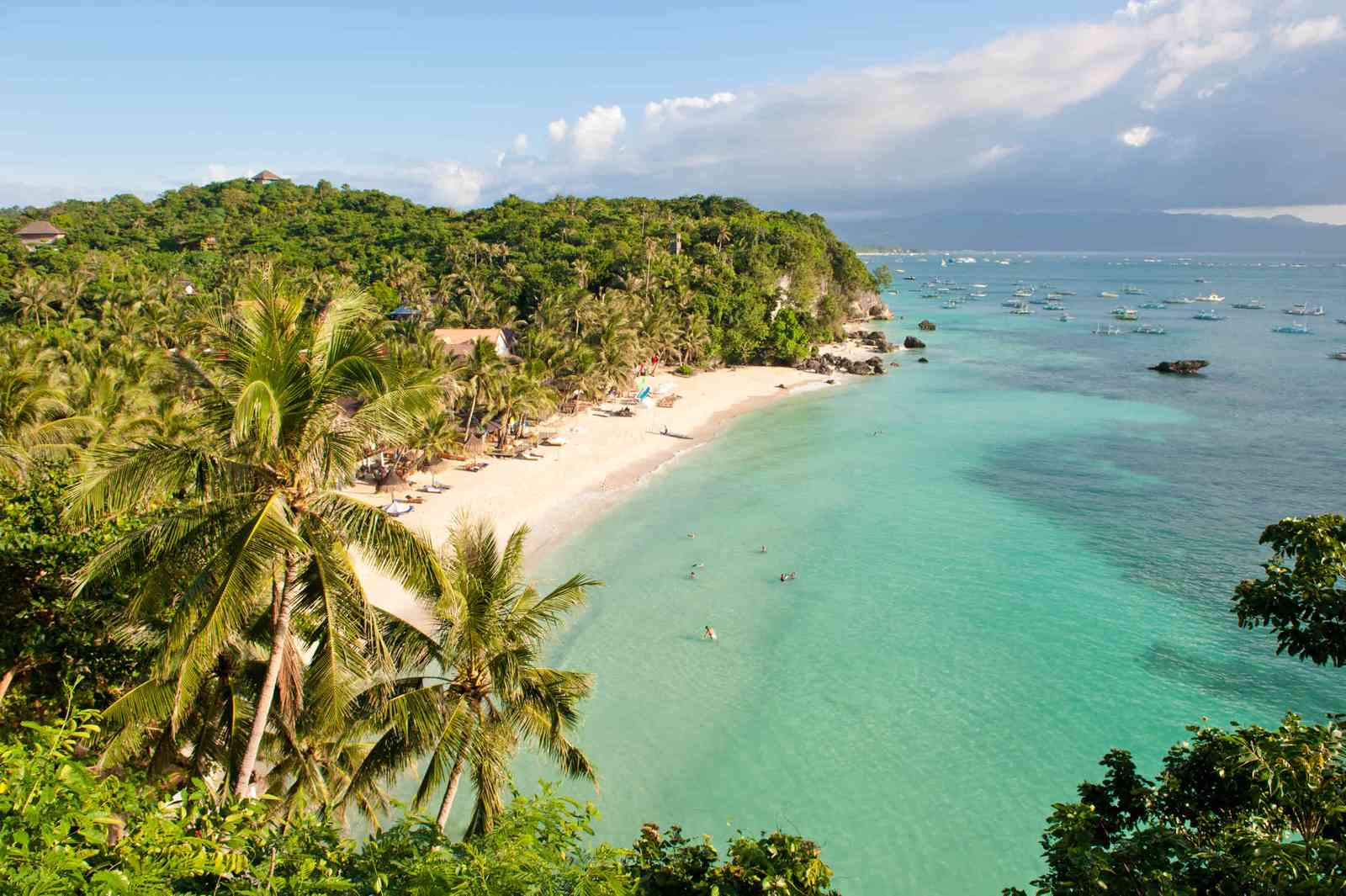 A couple of nights of Manila’s intensity may be all you can handle before the green wonders of Luzon (the main island) or the sandy allure of the several thousand islands scattered off the Philippine coast draws you elsewhere.

Photographers will go crazy for the vast rice terraces of north Luzon, with buses to Banaue an easy gateway to the 2,000-year-old paddies ridging its hills. After, head to the town of Sagada to see sacred valleys lined with hanging coffins.

Manila’s North Harbour Port has an armada of ferries setting sail. Beach bums will make a beeline for the white-sand beaches and swanky resorts of Boracay, lying out in the Sibuyan Sea.

Alternatively, outdoors lovers will find kinship in the eco-paradise of Palawan, riding its 8km-long subterranean river tunnel in Puerto-Princesa National Park. Divers can enjoy the sub-aqua nirvana of Puerto Galera’s corals, with its wall-dives, groupers, and schools of tuna.

Visas: Not required by British nationals for up to 30 days.

Currency: Philippine Peso (PHP), currently PHP60.1 to the UK£; US dollars are popular and ATMs are widespread.

Health issues: No major health issues, although there’s been a handful of recently diagnosed cases of zika virus. Manila’s heat and humidity can be overpowering.

Climate: Temperatures range from 28ºC to 35ºC year-round, with typhoons common between June and September.