With a rich maritime history and great walking on its doorstep, Phoebe Smith discovers the gateway to the fjords is a place worth visiting in its own right…

4 mins
Perched on the edge of seven fjords, it’s no surprise that Bergen found fame in recent years as the main starting port for any exploration of Norway’s fjordland. Boats – full of locals and travellers alike – depart its harbour regularly. But its not only tourists who saw the city’s location as a key asset.

Founded in 1070, the city’s coastal location saw it fast established as a key European trading port, and it quickly became Norway’s capital. By the 14th century, a branch of the Hanseatic League (a powerful collective of merchant guilds across Europe) had set up shop here, establishing Bergen as the country’s economic powerhouse.

The League maintained a presence in Bergen for 400 years until the city was overtaken by Oslo and fell into decline. But its legacy can still be seen today in the colourful wooden houses at UNESCO listed Bryggen on the harbour, which have survived countless fires over the centuries.

Most travellers use Bergen as a pitstop before they catch a ship or fly home. But in addition to the city’s rich history and its young, arty vibe – fuelled by a large student population and a multitude of art galleries – there are several other towering reasons to linger. Known as the ‘City of Seven Mountains’, here you can lace up your boots and set off hiking directly from the centre of town… 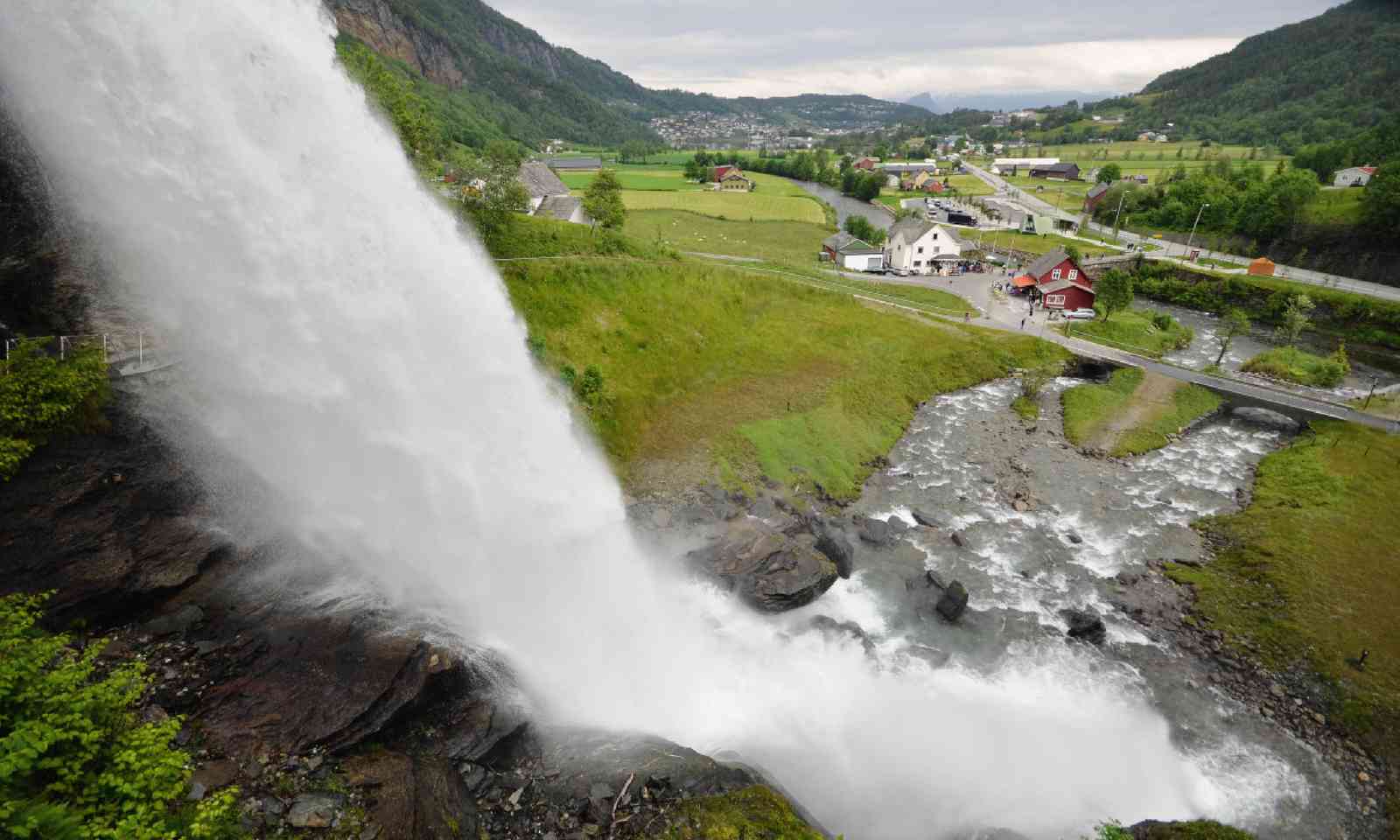 The cheapest, most efficient way is to take the Flybussen shuttle bus, which leaves every ten minutes. It takes about 25 minutes to get downtown. Taxis are also available.

The Bergensbanen, or Bergen Line train, will take you from Oslo to Bergen in about seven hours. There are four departures every day. You can opt to go during the day to gawp at the mountainous scenery (the track cuts through seemingly impenetrable gneiss rock and climbs to a whopping 1,237m high) or book a sleeping compartment and travel overnight. Another way is via ‘Norway in a Nutshell’; this follows the same route as the Bergensbanen, but you can leave the train at Myrdal, reaching Bergen via a combination of bus and boat through exquisite scenery.

Population: 275,378
Language: Norwegian; English is widely understood and spoken
Timezone: GMT+1
International dialling code: +47
Visas: British passport holders can enter Norway as a visitor for up to three months without a visa.
Currency: Norwegian Krone (NOK), currently around NOK12 to the UK£. ATMs are widely available.
Best viewpoint: From the top of Mount Fløyen at sunrise or sunset – you can walk or take the funicular from the city centre. Another option is Mount Ulriken – walking to its summit is possible, or you can take the bus from town then catch the cable car to the top.
Health issues: None, but health insurance is wise; see wanderlustinsurance.co.uk. Recommended guidebook: Insight Guides is the only series which offers a guidebook specifically on Bergen and Oslo. Rough Guides and Lonely Planet both feature chapters on Bergen in their Norway books.
Web resources: The official guide to the city is en.visitbergen.com, and it is a great resource for accommodation as well as attraction information. It’s also the place to buy a Bergen Card, which is sold in 24/48/72-hour varieties and includes admission into many museums and galleries, free bus and light rail travel, and discounts in some restaurants and cafés. Also try visitnorway.com for further Norway travel details.
Climate: Expect cold winters (around 2-5ºC) and mild summers (around 16ºC). 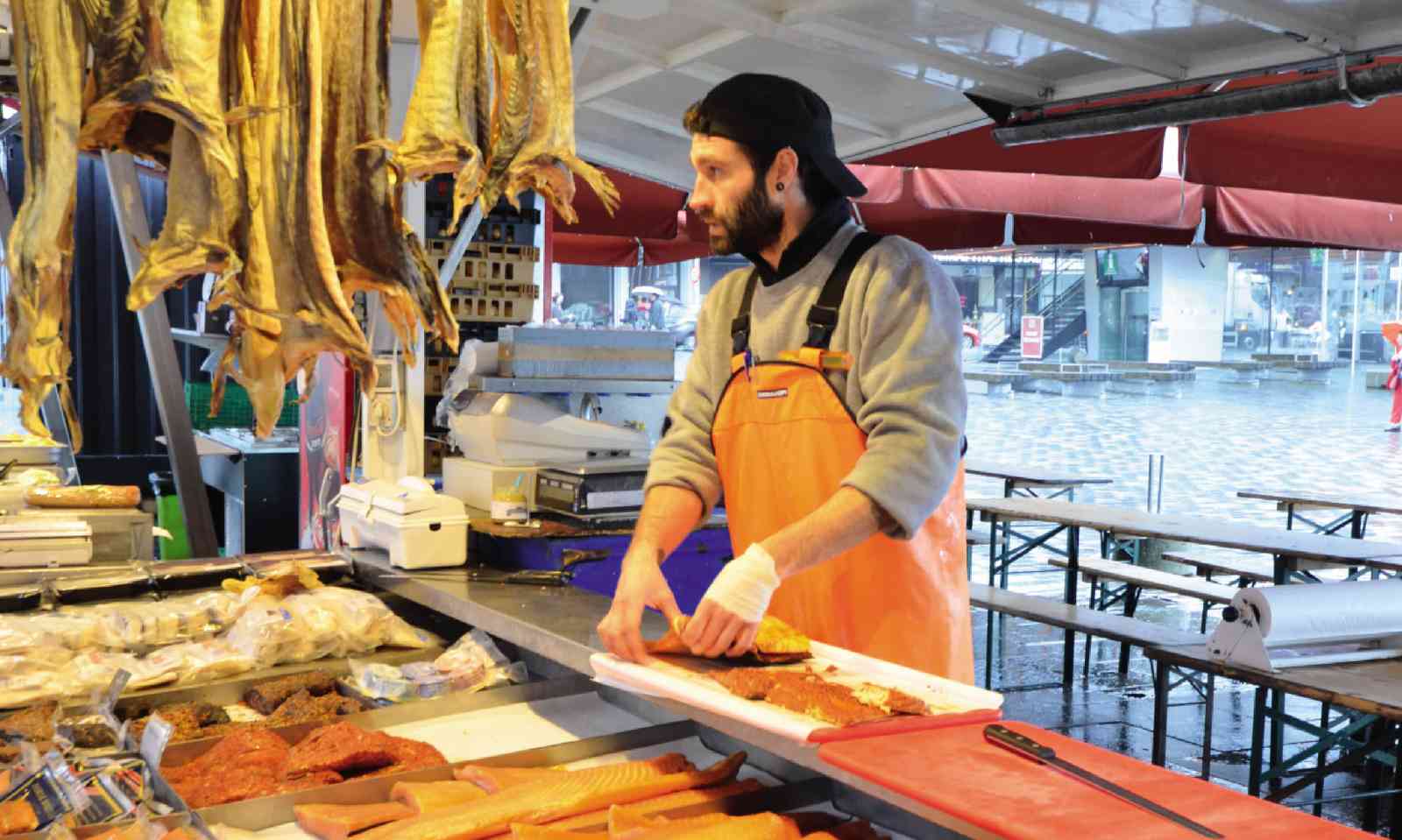 Begin with a wander along Vågen Harbour, where you can watch the fish market set up and see fishmongers prepare their haul. It’s also the perfect place to grab a coffee and a skillingsbolle (large cinnamon bun) and people-watch.

From here, head to the Hanseatic Museum (Finnegaarden 1a), one of the oldest wooden buildings in the city. It has been preserved in its 18th-century heyday to show the daily life of the German merchants who ran the city (1350-1754). Afterwards, go to Schøtstuene to see the old assembly rooms and kitchen.

Continue to explore the old buildings and craft shops around Bryggen. Pop into the Rosenkrantz Tower (parts of which were built in 1270) and check out Bryggens Museum where you can see excavations and earthworks of some of the original old wooden buildings.

Next, take the Fløyen funicular up the mountain for fine views at 320m. Grab a bite at the restaurant there and, once refuelled, try one of the many walking trails.

Take the 1km path to the true summit (425m), or walk to Brushytten cabin or one of the lakes, then stroll back into town. Spend an arty afternoon in one of the several buildings that make up the KODE gallery, then sample the seafood at Enhjorningen Fiskerstaurant, or try Bryggen Tracteurstend for traditional hearty Hanseatic cuisine.

Top end: If you’re itching to stay in the oldest (and traditionally best) part of town, then you can’t beat UNESCO- listed Bryggen, and in particular The Hanseatic Hotel. Its 37 rooms are all housed inside the old Finnegaarden Trading House, and as such, no two are alike. The old wooden wharf-style architecture has been kept throughout and it’s perfectly positioned for access to the Fløyen funicular. 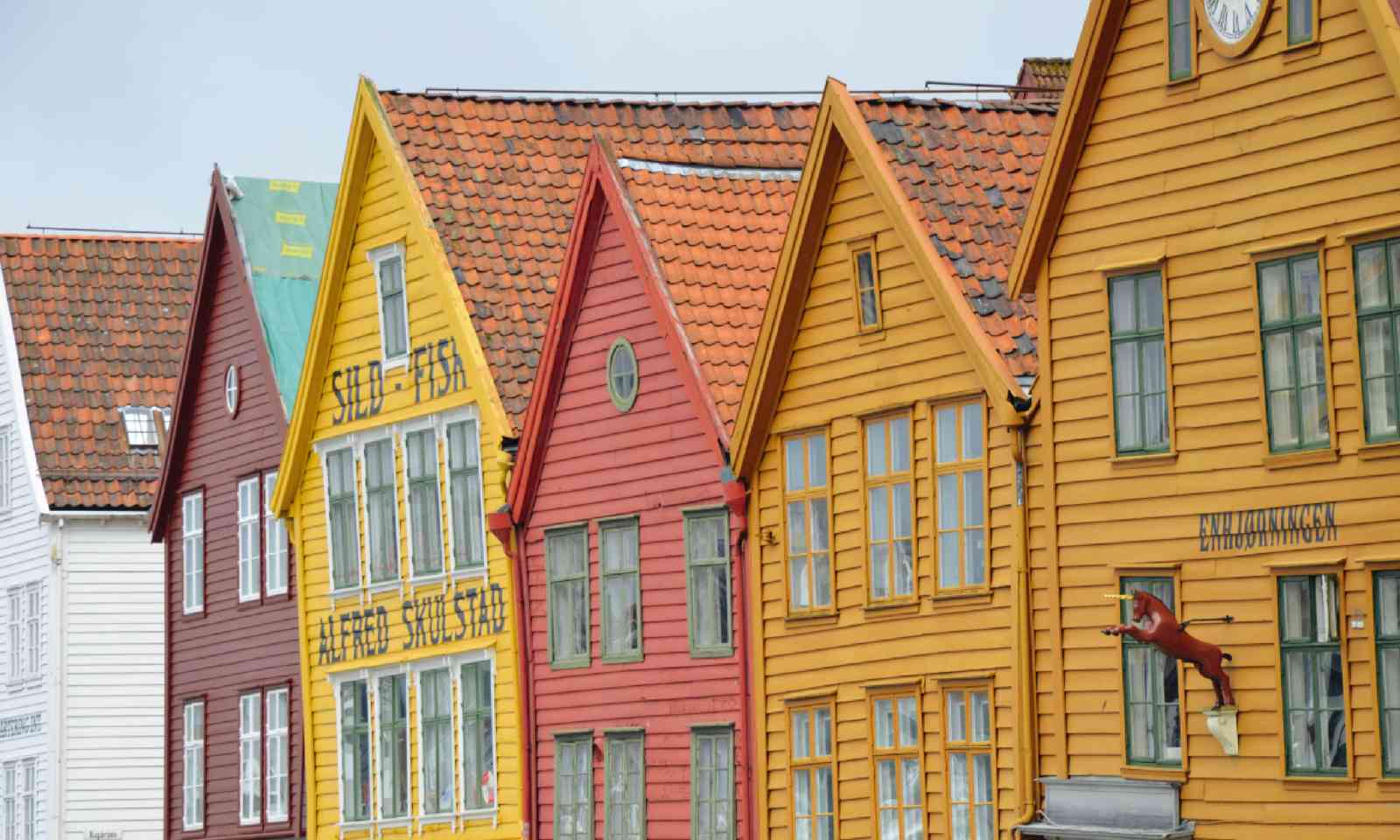 Mid-range: Centrally located in the city is the Thon Hotel Bristol Bergen. It offers private bathrooms and free breakfast and WiFi.
Budget: For those on a budget, Marken Gjesthus is a great option. Located just a ten-minute walk from the harbour, it has clean and comfortable dorm beds and private rooms (with shared bathrooms).

Stay – at least for a couple of days. With seven hills to hike, the Nordnes peninsula to explore (and bathe in the fjord in summer), an excellent Maritime Museum and plenty of four-hour cruises to take along the coast, there’s reason to linger.

However, when you do decide to move on you’ll be spoiled for choice. For those who
want to see more of Norway, there’s the train to Oslo, reputedly one of the best rail journeys in Europe. Or if you prefer to self-drive, pick up a car and head north; you’ll not only enjoy the coastal scenery as the land splays out into the sea, but if you go west, inland, on route Fv7 towards Hardangerfjord (home of the famous Trolltunga rock), you’ll
find an abundance of waterfalls, including the impressive Steinsdalsfossen, which you can walk behind.

Finally, you can make your getaway by water, on ferry, catamaran or Hurtigruten ship to
Sognefjord – the largest fjord in the country – and beyond...