How to spend your first 24 hours in Colombo, Sri Lanka

With its rich history, eclectic culture and buzzy culinary scene, the hip Sri Lankan capital deserves to be more than just a side note to the rest of the country. Here's why... 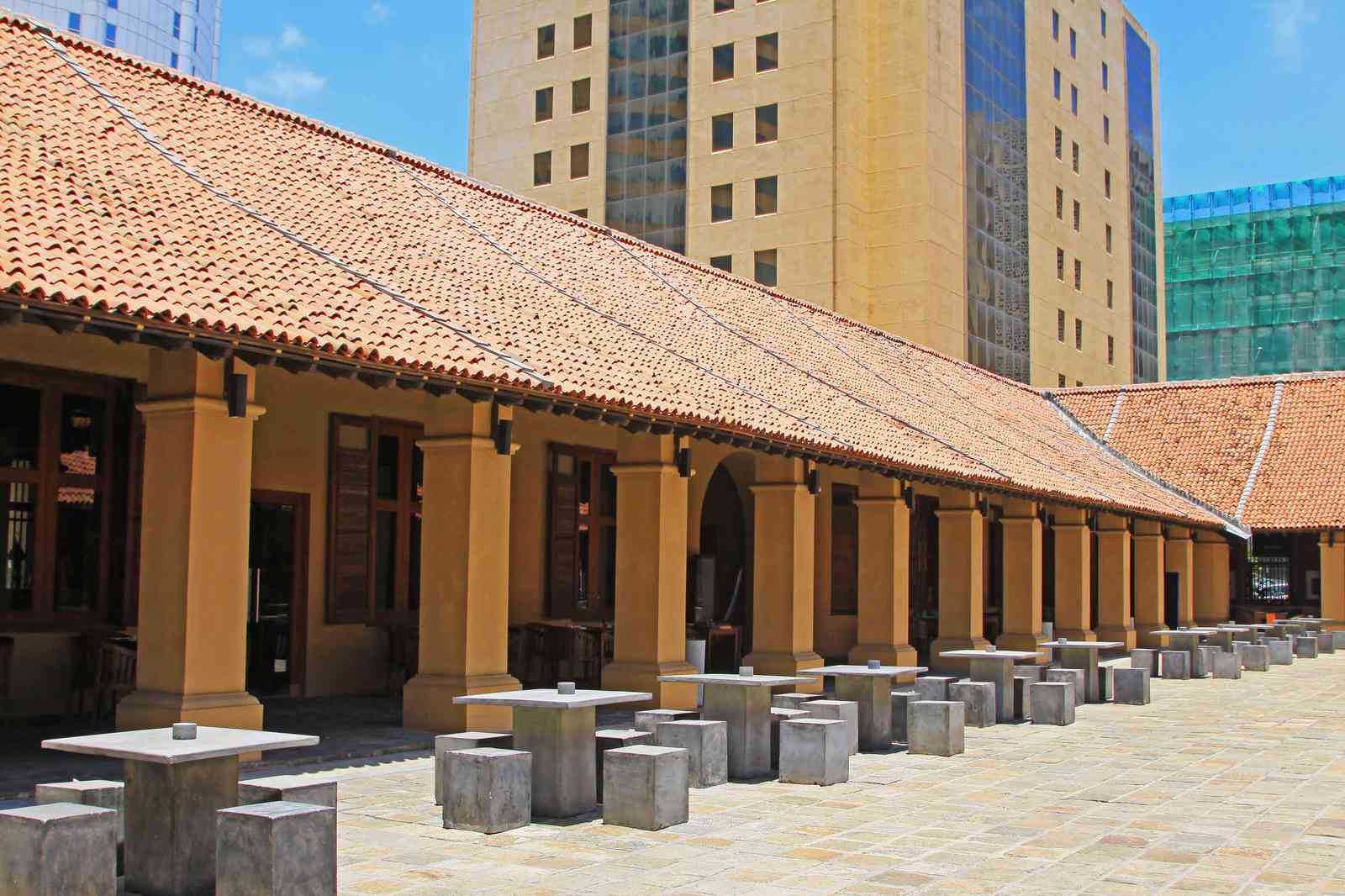 Sometimes a city can be too well placed for its own good. Visitors frequently skip Sri Lanka’s sprawling capital for the treasures that lie beyond, whether it’s the temples of the Cultural Triangle, the tea country of the highlands or the beaches and wildlife-filled national parks of the southern coast. But this increasingly cosmopolitan hub deserves better.

Since almost three decades of civil war ended in 2009, the colourful port city of Colombo has flourished. Checkpoints have come down and trendy bars and restaurants have gone up, yet there remain plenty of links to the past, not least in the atmospheric markets and colonial buildings.

The city’s once impenetrable fort may be long gone, torn down by the Brits in 1870 after stealing it from under Dutch noses by bribing their hired thugs (the orders to desert were smuggled into its walls in a wheel of cheese). But the fort area today is still the island’s political centre, and home to its oldest building (the Dutch Hospital). It’s also the start of Galle Face Green, now the city’s main promenade, though first created to give the Dutch canons a clear sighting - the perfect symbol for a chameleon city.

There’s nowhere else in Sri Lanka with an energy to match that of the capital. While there’s no shortage of temples and cultural sights here, there is also a thriving art and culinary scene, so stick around and you might just surprise yourself.

Bandaranaike International Airport is around 30km north of Colombo. It is served by daily direct flights from London Heathrow with Sri Lankan Airlines, as well as connecting flights with various Middle Eastern airlines. Flight time is approximately 11 hours; from £466 return. You can get your visa on arrival, but it’s cheaper to buy online beforehand. At the airport you’ll find tourist info, currency exchanges and ATMs. 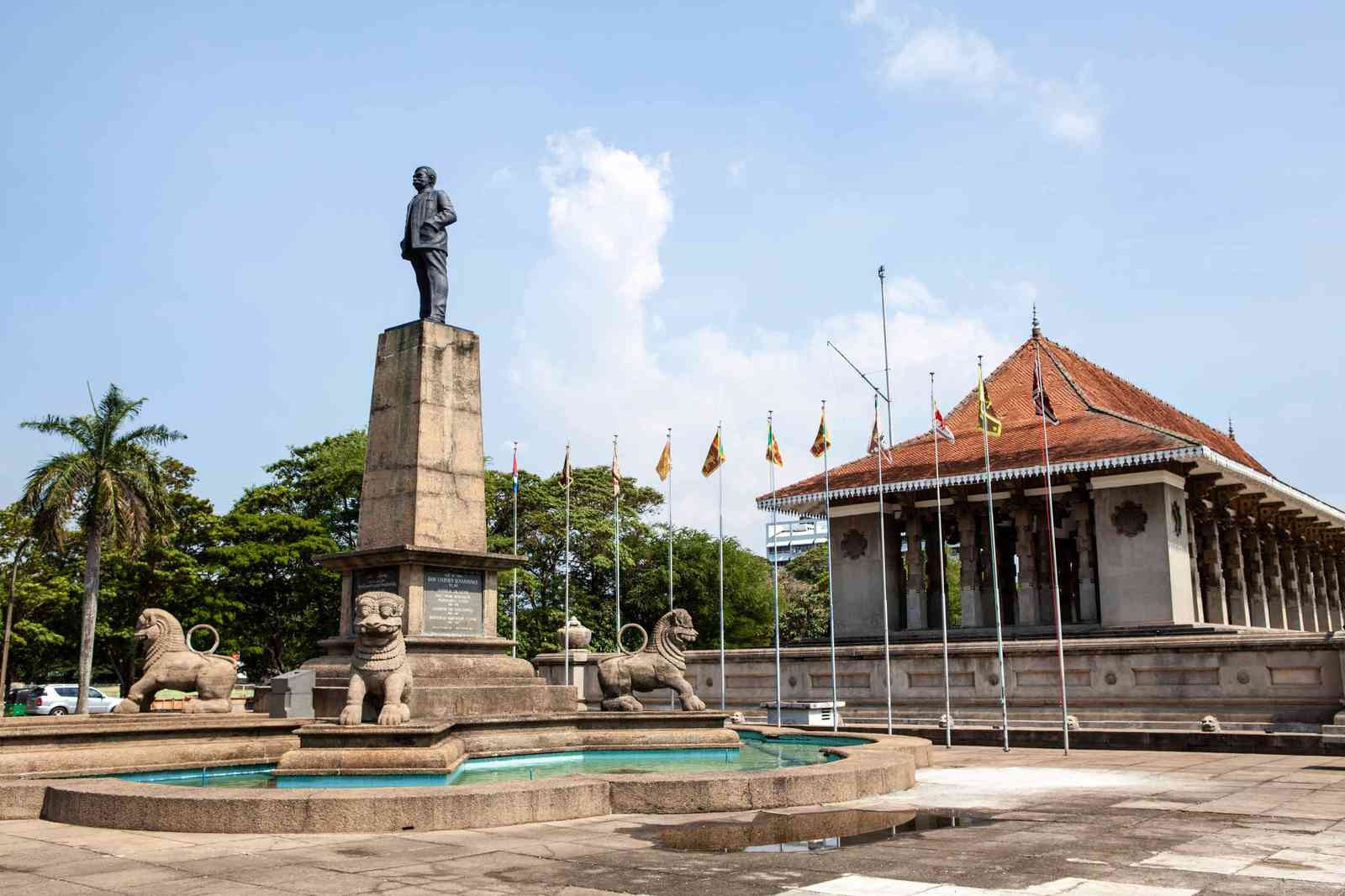 A taxi to the city centre costs about LKR3,000 (£15) and takes around 30 minutes, depending on traffic – ask to use the Expressway. The 187 Airport Express bus runs every half hour between 5.30am and 6.30pm, costing LKR130 (67p) and taking an hour (again, traffic) to reach the Central Bus Station.

Buses and trains are cheap but crowded. The city has three main bus terminals: Saunders Place and Bastian Mawatha serve long-distance routes and the Central Bus Station covers the city.

Trains go from the central Fort Railway Station: tickets for unreserved cars can only be bought on the day; reserved seats (such as in the observation car) can be booked up to 30 days in advance, though sell out fast. Operators such as visitsrilankatours.co.uk sell train tickets online to be picked up either at the station or the Mobitel counter at Colombo’s airport. 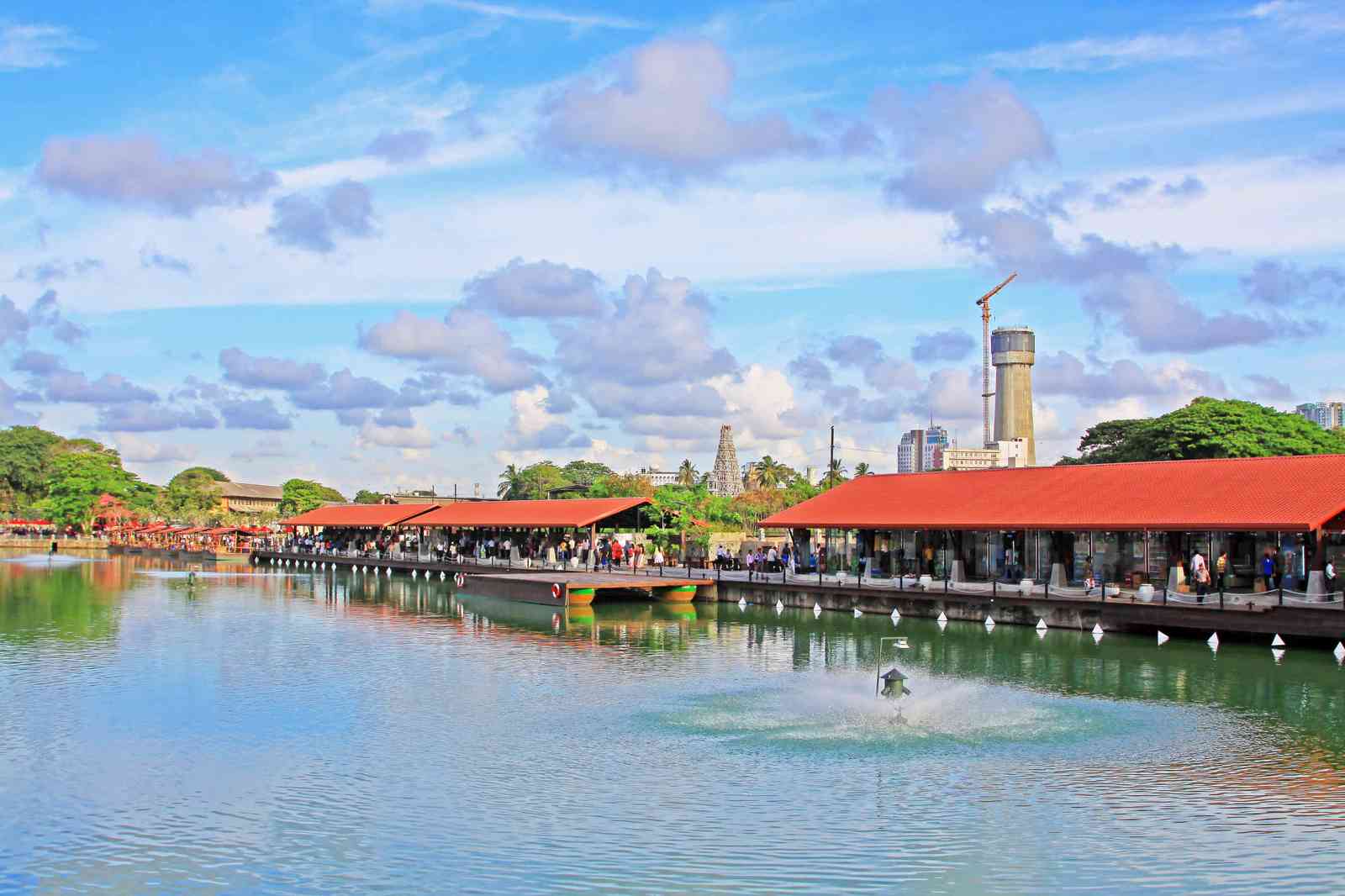 Start by strolling Fort district, Colombo’s old colonial centre. Circle the President’s House, the old General Post Office, an impressive clock tower that once served as a lighthouse, and the empty Cargill’s Department Store, just some of a raft of notable colonial edifices.

Grab a tuk-tuk east to Pettah, an ancient quarter of tightly packed streets, Hindu temples, mosques and thriving markets that sell everything from vibrant textiles to spices, snacks and pungent dried fish.

Get your bearings while learning about the city’s rich history on a Colombo City Walks ($40/£31pp) guided tour. For more cultural insights, head south to the National Museum to learn about the Sinhalese Kingdoms (543 BC–1810 AD), wandering 9th-century sculptures and the throne of a 17th-century king.

In the afternoon, take high tea (4–6pm) on the veranda of the Galle Face Hotel, gazing out over the Indian Ocean. Then, as the hot sun sinks, stroll north along Galle Face Green, a broad sweep of grass that runs the coast to Fort and is usually filled with locals either promenading or playing cricket.

Back in Fort, take time to explore the Dutch Hospital, a restored 17th-century building that now houses restaurants, cafés, bars and shops. End your day at the Ministry of Crab  for an upmarket version of Sri Lanka’s famed Jaffna crab, though book in advance.

Top end: Residence by Uga Escapes is an oasis in the bustling heart of the city, and rather peaceful, despite its central location. There is a swimming pool to cool off in when the sun gets too hot, while its sumptuous suites come with high ceilings, dark wood furnishings and silk-covered chairs. Doubles from US$158 (£123).

Mid-range: Lake Lodge is a family-owned guesthouse tucked down a leafy lane in the centre of the city. Their home has been sensitively converted and has contemporary rooms. If you want to splurge, book the Garden Suite ($153/£118), with its private terrace. Doubles from around $106 (£82).

Budget: The simple but effective Clock Inn Colombo is a spotlessly clean hostel-cum-hotel. Take your pick from a choice of modern dorm rooms (from $12/£9) with four or six beds, or basic private rooms with en suite bathrooms. Doubles from $45 (£34). 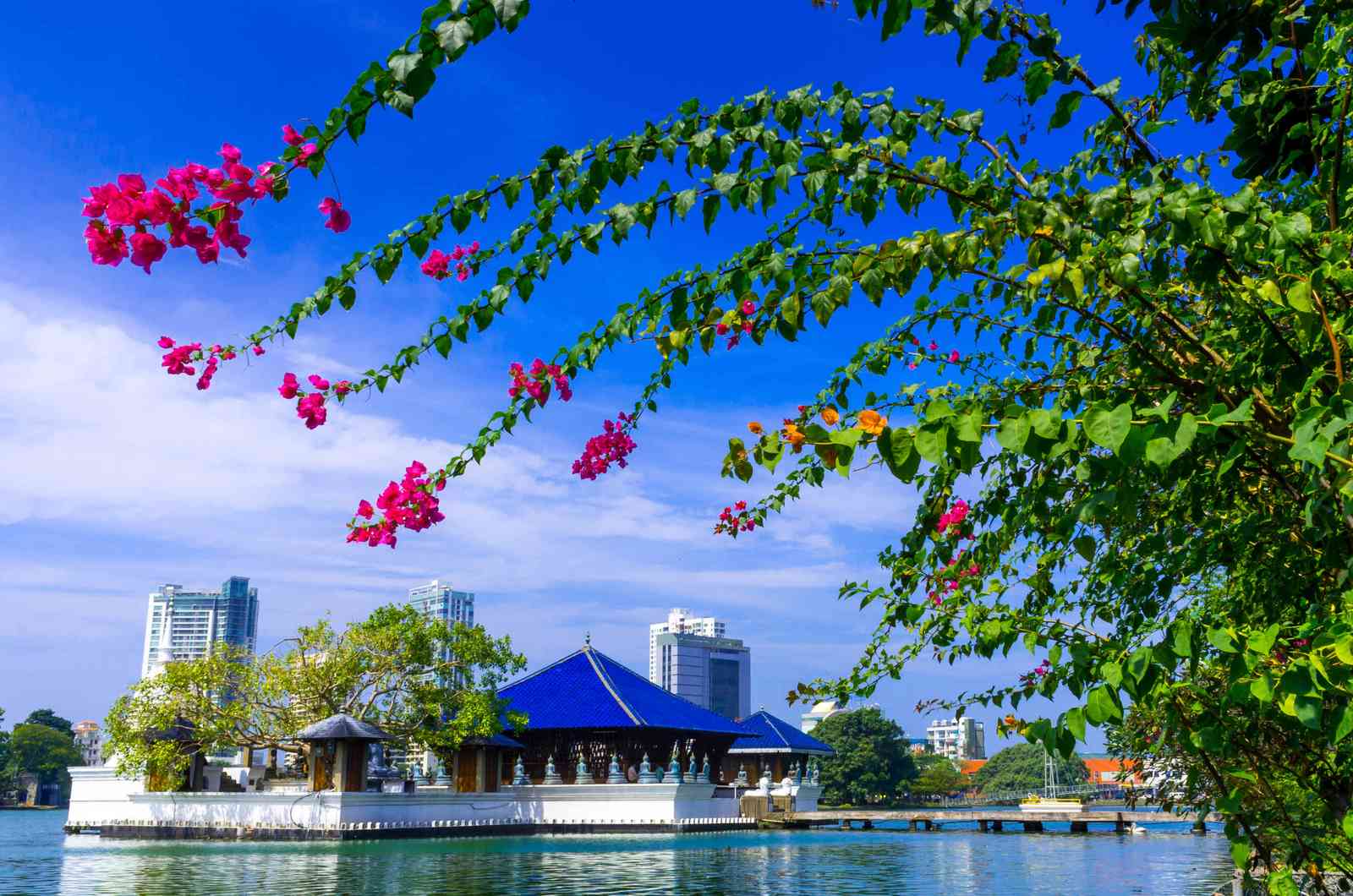 Take a couple of days to explore the city. Visit Number 11 on Bagatelle Road to see the former home offer prolific Sri Lankan architect Geoffrey Bawa. His work covers the island and the daily tours here make a good primer.

Afterwards, take a break from the hot city bustle at the Bawa-designed Seema Malaka temple on Beira Lake. Then find your inner consumer at popular Barefoot, a serene Colombo institution packed with artisanal crafts, clothes and homeware, plus a fine café at its larger branch on Galle Road. But if you’re hungry, Urban Adventures’ Eat, Eat, Repeat tour is a good pick to discover Sri Lanka’s spice-filled street food in an afternoon.

When it’s time to leave, the best way is by rail. Trains head east into scenic hill country (be sure to sit in the observation car), north to the Tamil region of Jaffna, or south to the fort town of Galle and on to the leopard-filled forests of Yala NP. 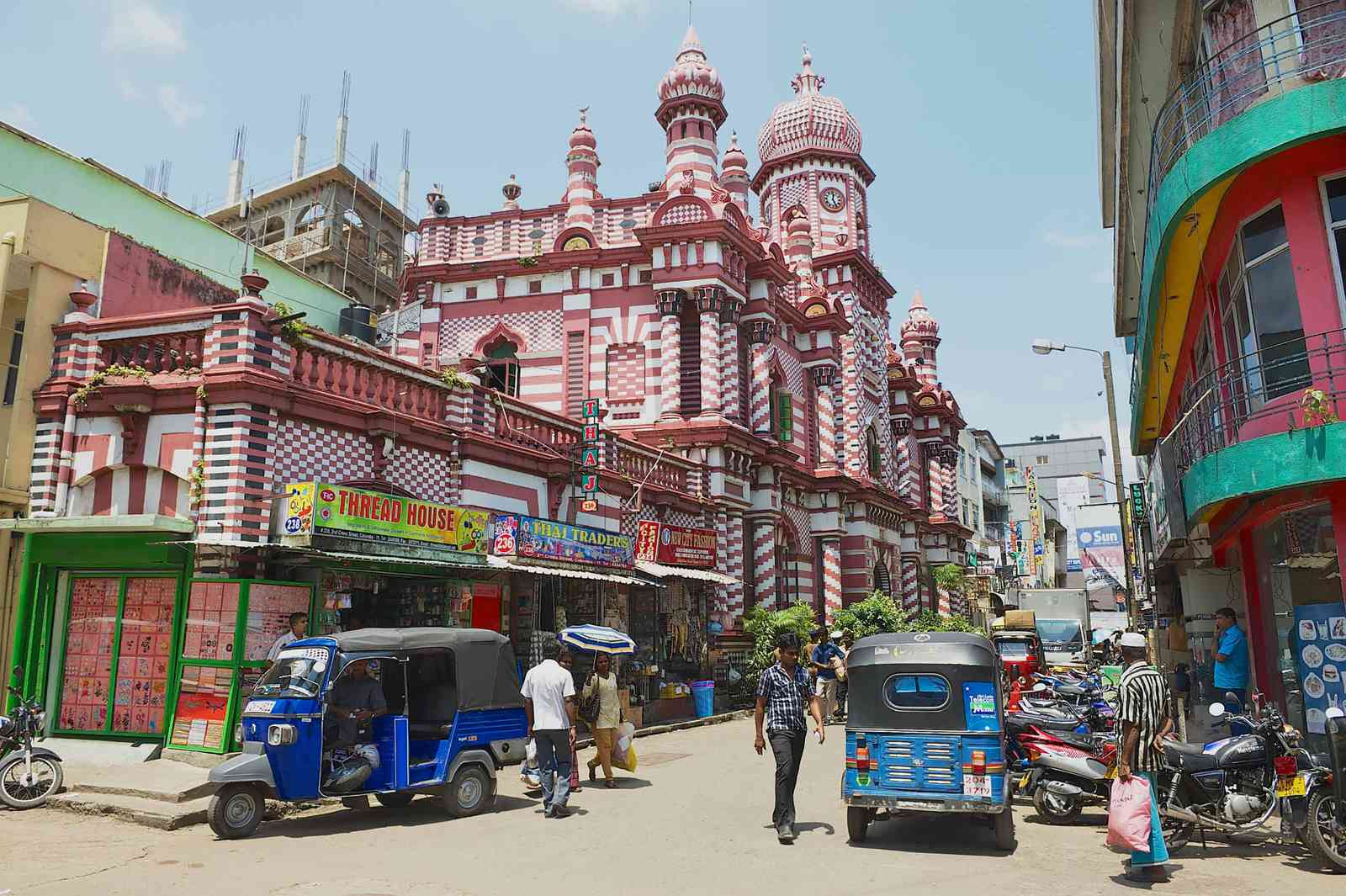 Currency: Sri Lankan Rupee (LKR), currently around LKR196 to the UK£. Highest viewpoint: Head to 41 Sugar, a rooftop bar on the same site as the historic Gymkhana Club, for cocktails with a view.

Health issues: Consult your doctor for advice, but be up to date with all jabs, including hepatitis A, typhoid and tetanus. Drink bottled water only.

Climate: The city has high temperatures throughout the year, rarely dropping below 30 degrees (ºC), with April often being the hottest month. The south-western monsoon brings rain throughout May and June, but these are mainly short, sharp showers that pass quite quickly.