How to spend the first 24 hours in Austin, Texas

While Texas might not strike you as the heart of liberal, laid-back America, Austin is busy keeping it hip and weird for the rest of the state

With the current Trump turmoil putting many Wanderlust readers off US travel for the time being, conservative Texas may seem like an odd place to head. But then again, Austin isn’t like the rest of the state. Often referred to as ‘a blueberry in a tomato soup’, it’s fiercely liberal by comparison – a state of mind rather aptly epitomised by its unofficial slogan: ‘Keep Austin Weird’.

Home to an abundance of university students – many of whom go on to settle here – it has a young and entrepreneurial vibe to it, with new start-ups, ingenious cafés and local initiatives launching seemingly every week. And boy does everyone seem to want a piece of it. Its population is growing exponentially, evidenced by the ongoing building work as it increases to expand.

And there’s just so much to do here. Like music?  Austin is home to two massive music festivals – not to mention a burgeoning live scene, meaning you’re never too far from a gig. Want outdoor space? Check out the SUP and bike-boats on the Colorado River, or simply stroll one of several parks. Just want to eat? The food truck (not to mention BBQ) scene is as varied as it is legendary.

Just go now, before this growing Texas giant becomes too big for its own cowboy boots… 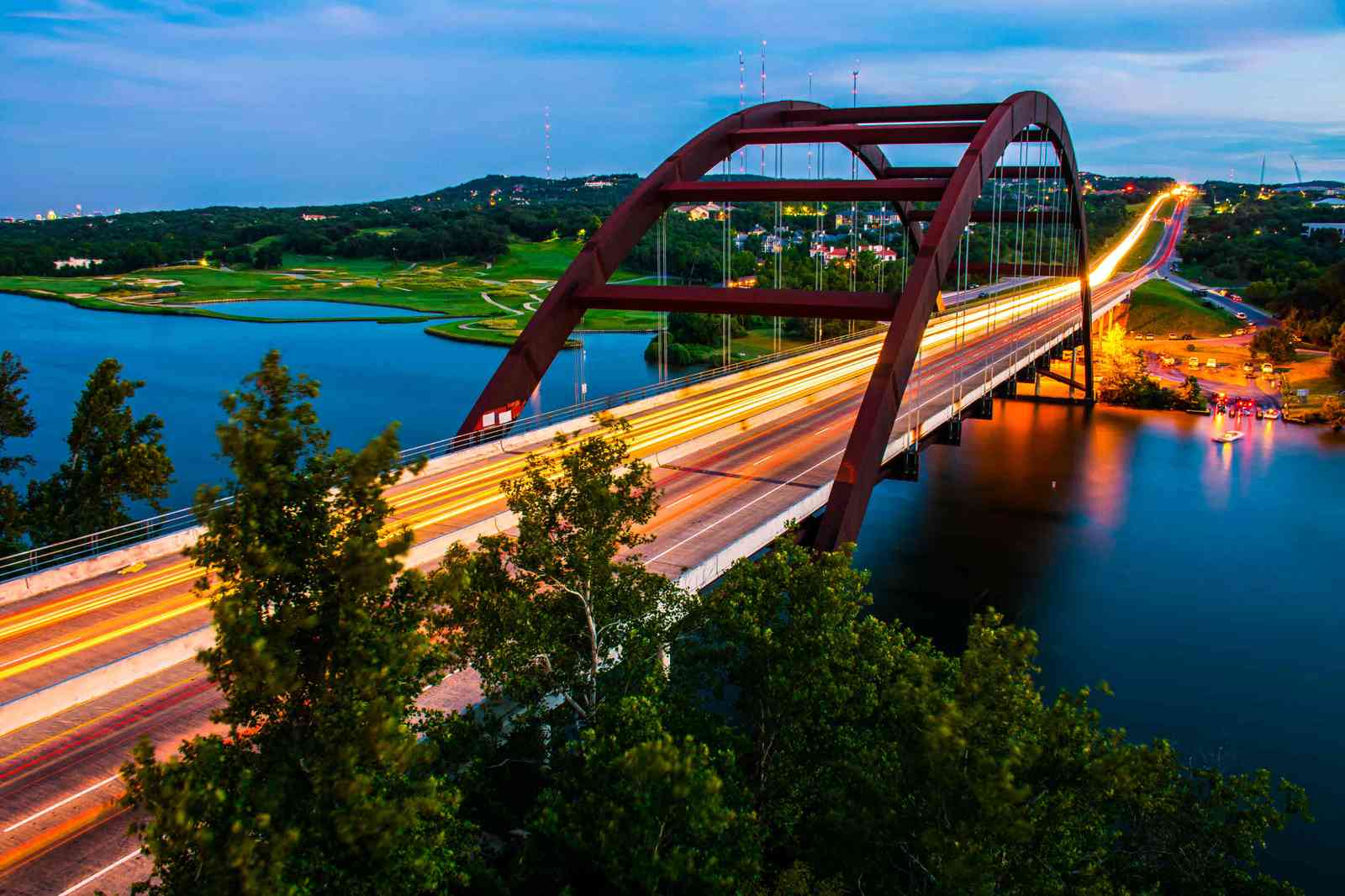 Austin-Bergstrom International Airport is around 8km south-east of Downtown. It’s served by daily direct flights from London Heathrow with British Airways. Flight time is around ten hours; from £794 return.

At the airport you’ll find tourist information, a currency exchange and ATMs. There’s also free Wifi and a courtesy phone for calling local hotels. British citizens should not require a visa for stays of up to 90 days, though with increased travel restrictions, you may do if you’ve been to Iran, Sudan, Syria, Yemen, Libya or Somalia – check with the embassy first. However, you will need a valid ESTA.

All the usual car rental companies can be found at the airport. Taxis cost upwards of $12 (£9.50; not a flat rate) depending on traffic, and take around 20 minutes to reach Downtown. You can take a Supershuttle. from $16pp (£13). The cheapest way is by bus. The Airport Flyer (100) connects Downtown with the airport; 350 Airport Blvd takes you to North Austin – prices from $1.25 one-way (£1; around 45mins).

Greyhound buses drop off at the Bus Station on 914 East Koenig Lane. There’s also an Amtrak Station (250 North Lamar Blvd). Both give access to routes across the USA. 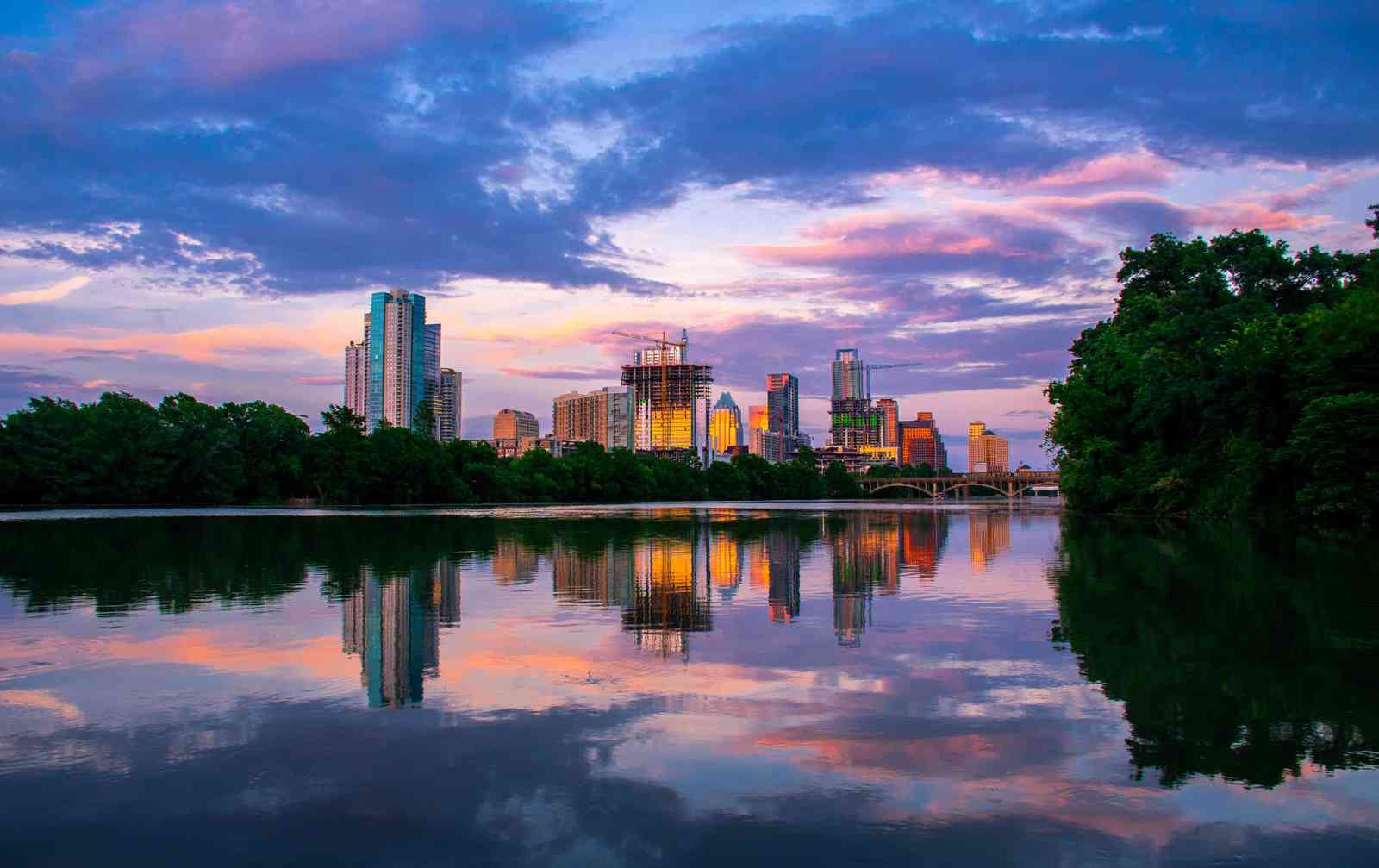 Visas: Not required by UK nationals unless you have visited countries on the USA’s ‘banned list’ – so check with the US embassy before you book. But you will need to have an ESTA before arrival; these cost $14 (£11) and are valid for two years.

Best viewpoint: From Lou Neff Point on Lady Bird Lake – this affords a great view of the skyline, with the water below nicely placed in the foreground.

Health issues: The main risk is from the sun, so take plenty of water when out and about, and don’t forget the sunscreen.

Recommended guidebooks: Lonely Planet, Rough Guides and Insight Guides all have Texas-specific books that cover the city of Austin and beyond.

Climate: Austin is subtropical and humid. May and June are wettest, and July and August hottest (expect average highs of 35°C). Winter is milder, with temperatures more around 17°C.

Downtown Austin is the best place to base yourself, with access to music venues and restaurants, as well as bat-viewing sites. For something a little less obvious, try the hipster area around South Congress.

Top end: In the bustle of Downtown sits Hotel Saint Celia, named after the patron saint of poetry and music. It has a mix of studios, suites, bungalows and even a bunkhouse, with a well-stocked library, music and bikes you can borrow. Doubles from $385pn (£310).

Mid-range: For something more classical, try The Driskill, with its marble-and-leather-tastic lobby – the rooms are a bit less OTT. Its patio is perfect for watching Austin’s nightlife go by. Doubles from $219pn (£175).

Budget: If you don’t mind moving further from the centre, you can get something equally as quirky but without breaking the bank. The Casulo has spacious, minimal rooms with doubles from $120pn (£95), including breakfast. 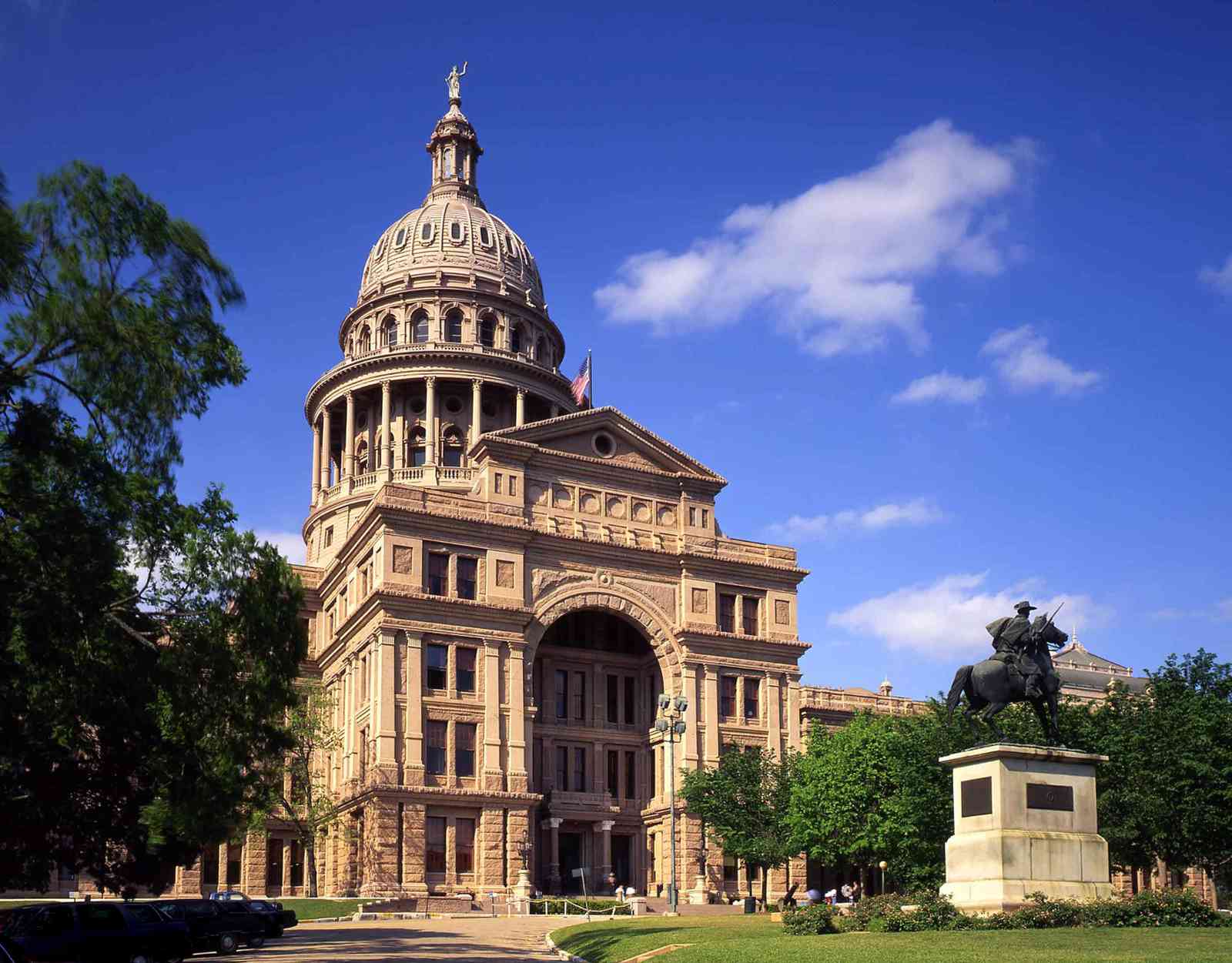 Get your bearings and bone up on your history at the State Capitol building, on the northern end of Congress Avenue. Wander it yourself or join one of the many daily free tours. Afterwards, meander Downtown and grab a breakfast doughnut at Voodoo Donuts – try its ‘Maple Bacon Bar’, or ‘The Loop’ for a ‘healthy’ alternative – before striking east.

Walk, hire a bike or take the bus ($2/£1.50 for a day pass) to check out Baylor Street’s Austin Graffiti Park at Castle Hill. Watch others work or even have a go yourself. Check out the vinyl at Waterloo Records opposite, on Lamar Boulevard, then grab a bite nearby at the – very right on – Whole Foods Market. Work off your snack with a stroll down North Lamar to Lady Bird Lake, then cross the bridge and pick up the trail alongside the Colorado River until you reach SoCo (South Congress).

This is home to boutiques, thrift stores, fancy-dress shops and indie cafés such as Jo’s Coffee, where you’ll find the ‘I Love You So Much’ mural. Time your walk back, so you’ll be on the bridge 20 minutes before sundown, when (from Mar-Oct) you can spot 1.5 million Mexican free-tailed bats take to the sky. For dinner, head to the food trucks (an Austin institution) around 6th Street, where you’ll be spoilt for choice. Then simply listen out for the best live music, follow the sound and grab a cool beer. 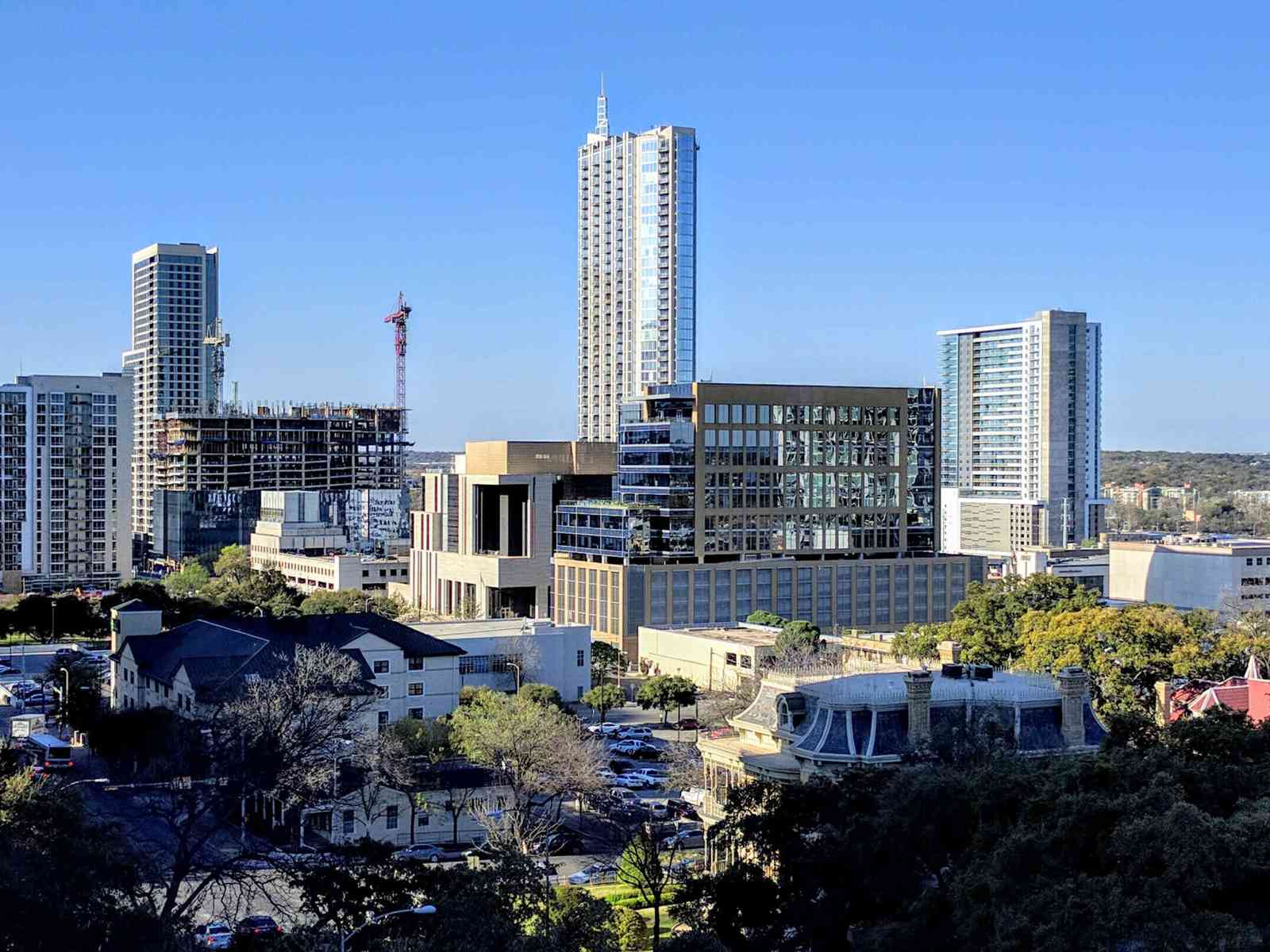 You need at least a few days to explore the city and truly get your Austin vibe on. You’ll want to take the obligatory photo at the ‘Greetings from Austin’ mural (South 1st Street), as well as make an appointment over the phone to visit the climbable Cathedral of Junk Sculpture at local Vince Hannemann’s house; hire an SUP to paddle the Colorado River; visit the Lady Bird Johnson Wildflower Center  – and that’s for starters.

For a guided excursion out of the ordinary, check out Austin Detours, who offer trips not only around the city but also live music crawls and a ‘Hill-country BBQ and Wine Shuttle’, where you head off out to the vineyards and wineries outside the city. If you’re looking for a road-trip, head north along the Chisholm Trail – an old cattle-driving route that runs from Texas to Kansas (via Oklahoma), and which also turns 150 this year. Yee-haw!