From Tunisia to Kauai: 5 fantastic film locations you must visit

Jo Price discovers the fascinating landscapes, buildings and cities worldwide that represent moviegoers' favourite imaginary destinations, with the best film locations you can visit around the globe... 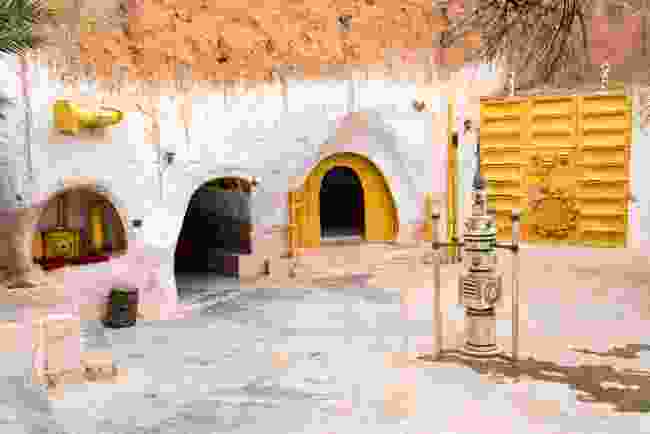 In a galaxy not so far, far away… Tunisia was selected to stage the planet of Tatooine in Star Wars: A New Hope (1977), and three subsequent instalments. Its arid landscapes, vast deserts and intriguing architecture made it the perfect choice for the dry, desolate planet.

The oasis city of Tozeur is a good starting point to explore the Skywalkers’ homeland. Organised tours will take you bounding over sand dunes in a dusty 4x4 to visit these otherworldly locations.

Sidi Bouhlel (AKA Juntland Wastes), north-east of Tozeur, is the canyon in which Luke Skywalker met Ben Kenobi.

The Mos Espa set remains mostly intact, its mise-en-scene a bizarre sight to come across in the remote and ancient Tunisian desert. The set is home to a small Tatooine village and a pod-racing arena.

In the south of the country, the town Matmata is famed for subterranean sandstone dwellings, built by the native Berber people. These structures doubled up as troglodyte homes in A New Hope and The Phantom Menace. You can stay overnight in these underground rooms and eat in a local Tatooine restaurant – if that’s your thing.

And to avoid any confusion... the name ‘Tatooine’ was taken from a real place in southern Tunisia: Tataouine. This city is also home to Berber dwellings and is a popular tourist attraction.

Did you know? Sidi Bouhlel was also the choice location for filming scenes in Indiana Jones: Raiders of the Lost Ark (1981) and The English Patient (1996). 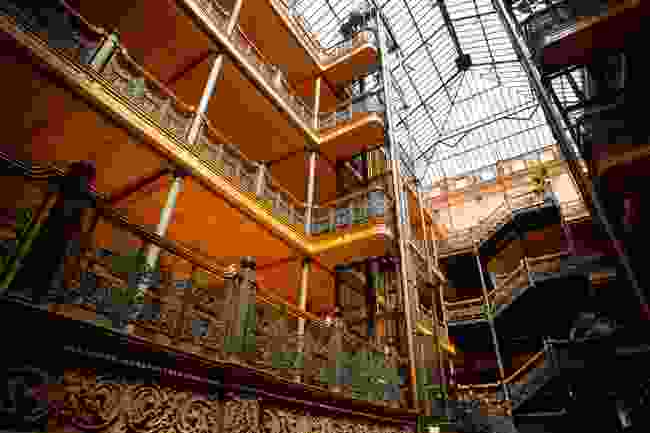 Ridley Scott’s 1982 film, Blade Runner, saw L.A. transformed into a dystopian metropolis. Set in 2019, Scott’s vision of future Los Angeles involved hovercraft traffic, dense smog and rows of skyrise slums. While the city’s not at that point just yet, you can visit some of the locations that made up this fictional urban hellscape.

Start with the Bradbury Building. Located in downtown Los Angeles, this architectural landmark was used to shoot the film’s climactic rooftop scene, in which actor Rutger Hauer made his-  famously ad-libbed - ‘tears in rain’ speech. The building housed J.F. Sebastian’s apartment, where much of the film’s story unfolds.

The iconic Ennis House also features in the sci-fi adventure. Designed by Frank Lloyd Wright and inspired by Mayan architecture, the grand residential building was used as the apartment of Rick Deckard (played by Harrison Ford).

In July 2011, it sold for $4.5 million USD to business man Ron Burkle. The terms of the sale stipulated that the historical building must be open to the public 12 days a year.

Did you know? The Bradbury Building has also been used in Murphy’s Law (1986), Disclosure (1994) and the recent Academy Award-winning silent movie The Artist (2011).

3. United Kingdom, as itself (sort of) 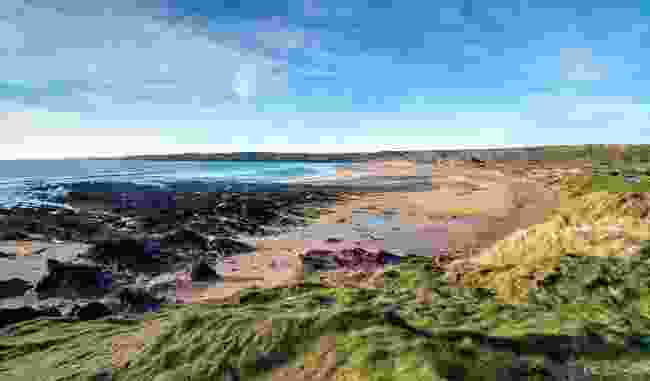 In shooting the magical Harry Potter franchise, filmmakers infused classic British buildings and countryside with a sense of the supernatural.

Black Park in Buckinghamshire may have lived up to its ominous name, when doubling as the dark and frightening Forbidden Forest in the films. If you explore its footpaths and abundant wildlife, you’ll likely see it in a better light.

The Glenfinnan Viaduct near Loch Shiel, Scotland, allowed the Hogwarts Express to cross the western highlands. It's an excellent attraction for rail enthusiasts and Potter fans alike – but it is imperative not to walk on the viaduct itself. It's an active railway line and there have been recent near misses.

A prime surfing spot, the beautiful Freshwater West Beach in Pembrokeshire, Wales, was chosen as the location of the Weasleys’ Shell House in Harry Potter and The Deathly Hallows (2010).

London’s historical food market, Leadenhall Market, captured Hollywood’s attention as it was used to film scenes in Diagon Alley. You might not be able to barter for brooms in this historical east London venue, though you can definitely get a decent meal.

Did you know? Alnwick Castle in Northumberland was not only used to film scenes of Hogwarts School of Witchcraft and Wizardry, but also starred in Elizabeth (1998) and Robin Hood: Prince of Thieves (1991). 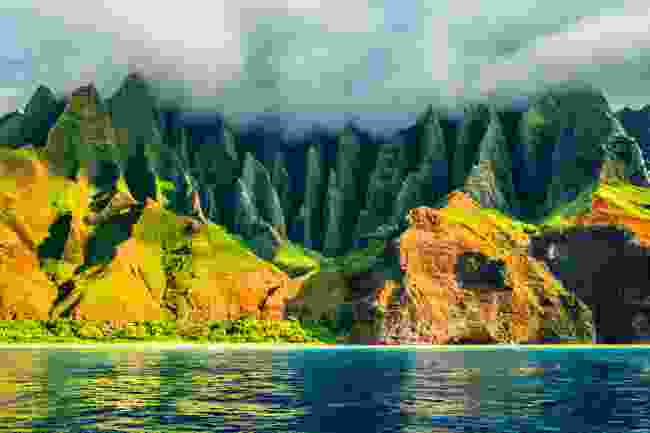 Disney selected the Hawaiian paradise island of Kauai as the main location for the fourth instalment in their swashbuckling franchise, Pirates of the Caribbean.

The island is known for dramatic emerald mountains that tower over narrow slivers of untouched coastline. Fans of the film may remember Johnny Depp’s captain Jack Sparrow washed up on the shore, in search of the fountain of youth.

Aptly named Hawaii’s ‘island of discovery’, Kauai is also home to roaring waterfalls, rainforests and isolated villages. Makauwahi Cave, on the island’s south side, is the largest limestone cave complex on the Hawaiian Islands.

It may have been invaded by scheming pirates during filming, but has provided archaeologists with a proverbial treasure trove of Polynesian artefacts. 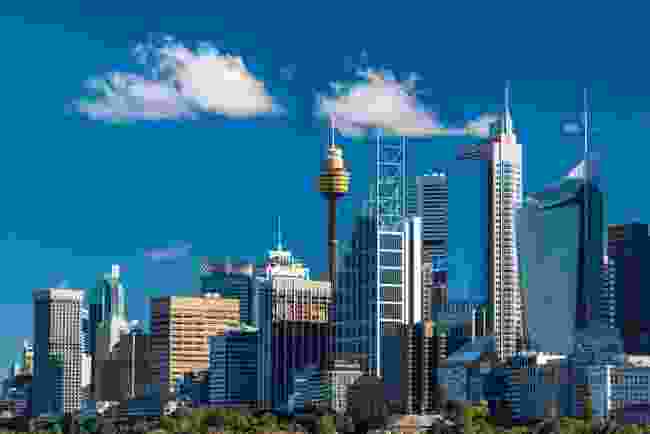 In 1999, the Wachowski Brothers took to the streets of Sydney to turn their dystopian vision of a world controlled by machines and supported by human beings into an on-screen reality. The result? Keanu Reeves and Laurence Fishburne in the now-classic The Matrix.

During shooting, the futuristic thriller used New South Wales - particularly Sydney and its modern business district - to its advantage.

The corners of Pitt Street, O'Connell Street and Hunter street made up the iconic bird’s eye view phone booth shot in the film. Martin Place Fountain was the site of the 'Woman in the Red Dress', who taught Keanu's character Neo a lesson in looking out for deadly agents.

There are plenty of places to go in this cosmopolitan centre. Embark on a short train ride to visit the less frequented Jibbon Beach in the Royal National Park or climb the famous Harbour Bridge and take in the panoramic view of the city and beyond.

Alternatively, tuck yourself up in an earthy bar in The Rocks district, or try crocodile pizza and a wide selection of beers in The Australian Hotel.

Explore more of these amazing destinations:

Call of the wild: Desert horseriding in Tunisia

The Wanderlust guide to visiting the Scottish Highlands