9 famous graves you must visit in the USA

Pay your respects to the greatest leaders, actors and musicians in American history on this pilgrimage through some of the most beautiful cemeteries in the USA 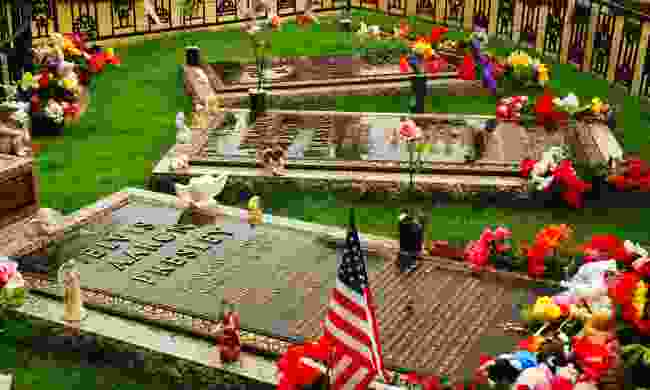 The graves of Elvis Presley and his family at Graceland (Dreamstime)

Though it's one of the most famous graves in the world, Elvis Presley’s final resting place in the grounds of his Graceland mansion was actually a second choice. When ‘The King’ died of a prescription drug overdose in August 1977, he was initially buried in a mausoleum in Forest Hills Cemetery in Memphis. It was only after a thwarted attempt to steal his body that he was interned in the Meditation Garden at Graceland.

You can visit the Meditation Garden for free from 7:30am to 8:30am every day except Thanksgiving and Christmas, or pay for a Graceland tour that covers the mansion and the grounds. Expect to have company, though: 600,000 people visit the grave every year, contributing nearly $150 million to the Memphis economy. 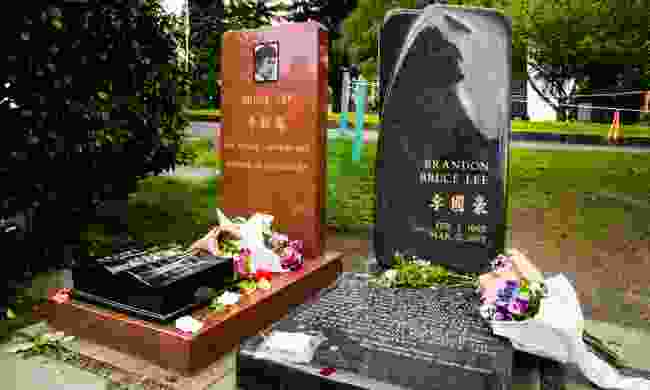 The graves of Bruce Lee and his son, Brandon (Dreamstime)

You can pay your respects to the world’s greatest Kung Fu master, Bruce Lee, at his modest grave in Seattle’s Lakeview Cemetery. His son, Brandon Lee, lies beside him.

Bruce Lee continues to command incredible respect and devotion, even 40 years after his death. Three Mongolians trekked 3,700 miles to pay their respects: the trip took them seven months and, legend has it, they went through five pairs of shoes each. 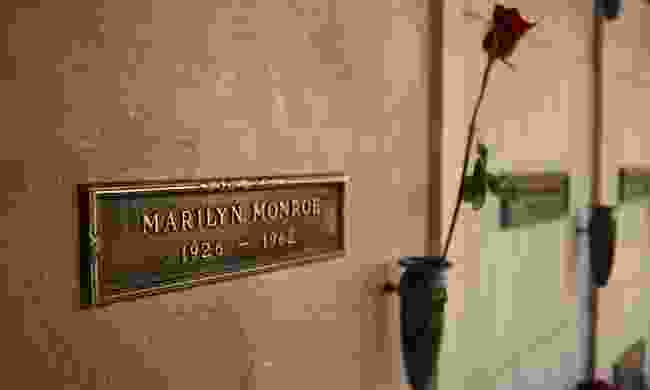 One of the most iconic and controversial movie stars in America’s history, Marilyn Monroe continues to fascinate and provoke. Her remains are interred in crypt number 24 in the Corridor of Memories at Brentwood cemetery, and the crypts surrounding it sell for astronomical sums. The founder of Playboy, Hugh Hefner, reserved his place beside her decades before he died.

Ironically, Monroe was interned at Brentwood because it was a quiet, out-of-the-way cemetery. That didn’t stop the crowds – in life or death. Not only has the marble in the crypt become discoloured from all the lipstick kisses, but a host of other celebrities followed in her wake – including Dean Martin, Jack Lemmon, Roy Orbison, Frank Zappa and Truman Capote. 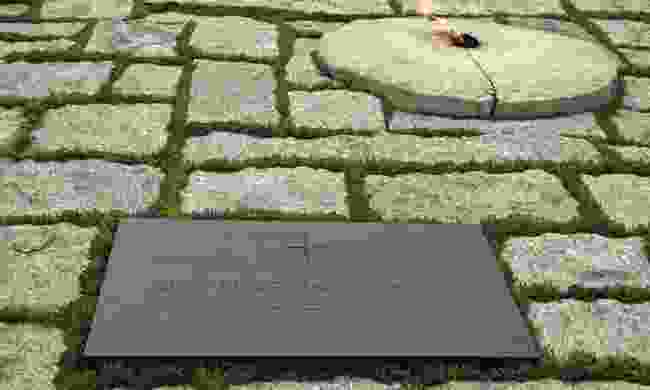 Marked by a simple plaque and a lone flame, the final resting place of President John F. Kennedy in Arlington National Cemetery is solemn and dignified – a stark contrast to the fire and fury of his presidency (and, indeed, his death).

President Kennedy had admired the peaceful atmosphere of the location when he visited the grave of the Unknown Soldier in March 1963. His grave has views of both the Lincoln and Washington monuments and is a short stroll from the Unknown Soldier memorial. The flame has only been extinguished twice. Once during a particularly heavy rainstorm, and once when a group of over-enthusiastic Catholic school children sprinkled a little too much holy water on it. 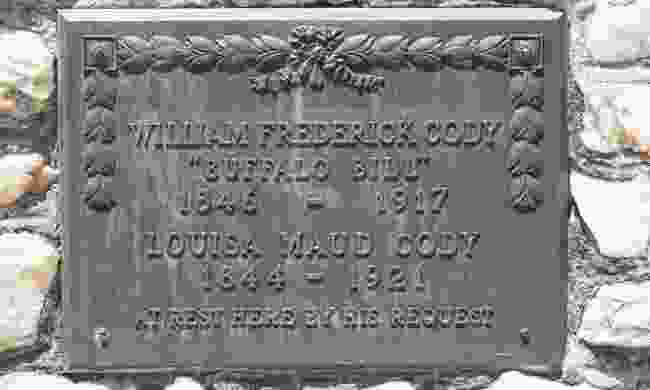 The grave of William F. 'Buffalo Bill' Cody enjoys an enviable view. Located in Lookout Mountain Park, part of the Denver Mountain Parks system, it faces the Great Plains and the Rockies.

The site is also home to a Buffalo Bill museum and, together, they attract over 400,000 visitors every year. Perhaps that’s why the town of Cody in Wyoming, which was founded by Buffalo Bill, claims that he is in fact buried there. All the evidence points to Lookout Mountain, but maybe you should visit both – just to be on the safe side. 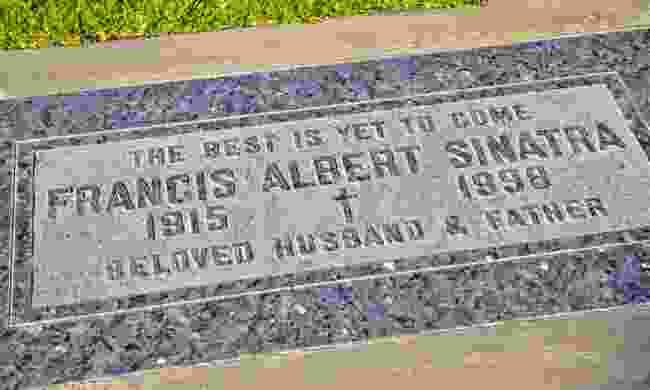 The grave of Frank Sinatra (Dreamstime)

Despite being a Jersey boy through and through, the final resting place of Hoboken’s most famous son is on the other side of the country – in Palm Springs, California.

Frank Sinatra once described Palm Springs as a "sewer", so it is not clear that he did do it his way – in death at least. Having said that, he was buried with a bottle of Jack Daniels and a pack of Camel cigarettes, with lyrics from one of his popular songs carved into his gravestone. It says: 'The best is yet to come'. 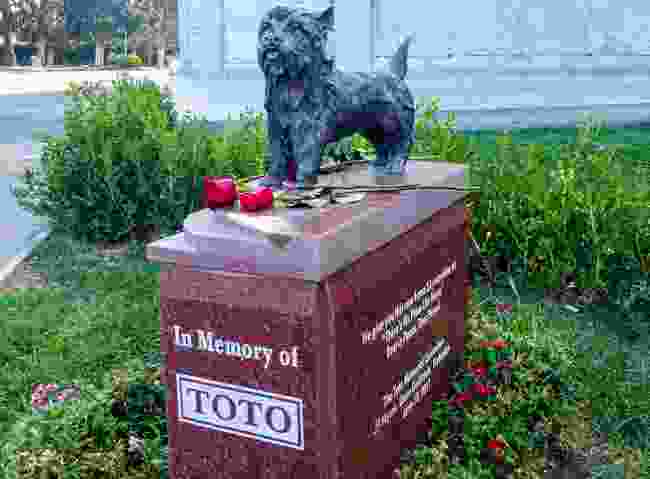 The Hollywood Forever Cemetery is the final resting place for many of Hollywood’s greatest artists. Here you’ll find Rudolph Valentino, Cecil B. DeMille, Judy Garland... and Toto from The Wizard of Oz.

It should come as no surprise. Located on Santa Monica Boulevard, the Hollywood Forever Cemetery is one of the city’s oldest and most eccentric. It has served as a location in countless horror movies and, since 2002, has been used as an outdoor cinema. Music events are held within its grounds too. The Flaming Lips played the cemetery in 2011 and, in 2013, Gary Numan recorded a live album here as part of his 'Splinter' world tour. 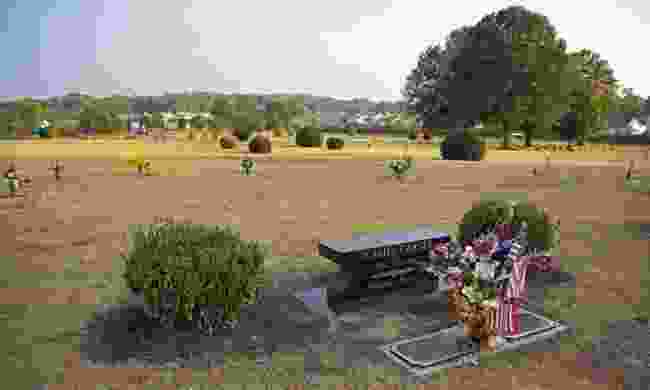 Famously known as ‘The Man in Black’, country singer Johnny Cash perpetually looked like he was ready for a funeral. In 2003, it was time for his own, barely four months after his beloved wife June Carter passed away.

Both are buried in Hendersonville Memorial Gardens, close to their final home in Tennessee. The modest tombstones bear their names and a simple reference to their most famous songs: 'I Walk The Line' for Johnny, and ‘Wildwood Flower’ for June. 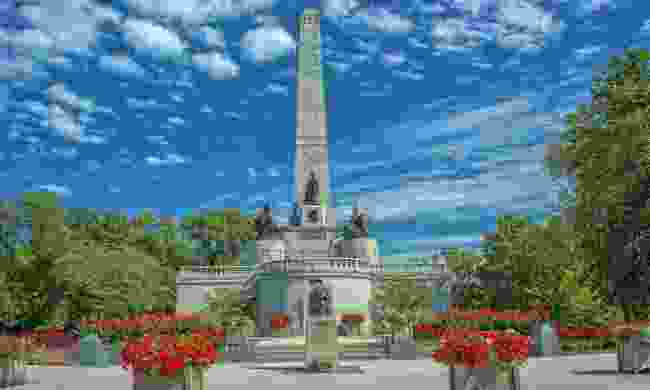 On the day that President Abraham Lincoln died in 1865, a group of citizens from Springfield started a campaign to raise funds to construct a suitable grand tomb for him. The result is an impressive granite edifice, complete with an imposing 35-metre obelisk, an ornate terrace with balustrade, and a giant bronze of the president’s head.

The tomb is located in Oak Ridge Cemetery in Springfield, Illinois. It was designated as one of the first National Historic Landmarks in 1960, and the first listed when a register was set up in 1966. It is also the final resting place of Lincoln’s wife, Mary Todd Lincoln, and three of their four sons.