Will Ferrell and Rachel McAdams shine as Fire Saga, a misguided pair of Icelandic Eurovision Song Contest hopefuls in Netflix’s comedy film. But where was the movie shot? Find out here...

Eurovision Song Contest: The Story of Fire Saga appeared on Netflix without much warning in 2020. It’s a camp comedy about Lars (Will Ferrell) and Sigrit (Rachel McAdams), childhood best friends from a small town in Iceland. They moonlight as pop band Fire Saga, desperately trying to achieve their (but mostly Lars’s) lifelong dream of winning the Eurovision Song Contest.

Yes, it’s as silly as it sounds. But for all its daftness, the film does inspire the odd laugh and brings all the joy of the real life Eurovision to our living rooms. There are even several dusty-dry appearances from beloved Irish Eurovision presenter Graham Norton. From Iceland to Scotland, we take a look at the film's myriad of wanderlust-inducing filming locations. (Some spoilers ahead). 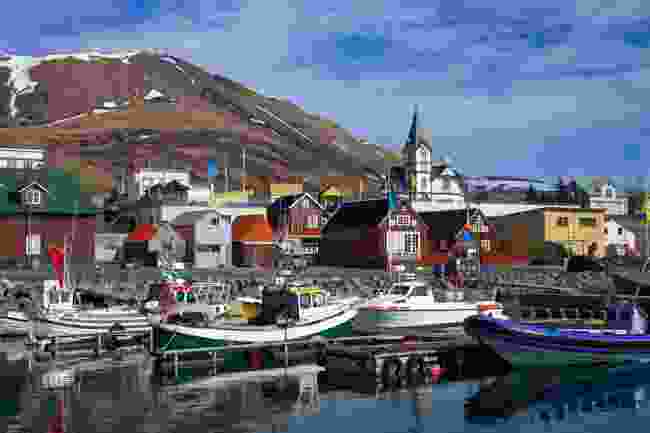 This small fishing town of just 2,300 or so residents – set on the northern Icelandic coast – is now famous the world over as the hometown of Eurovision’s main characters, Lars and Sigrit. Aside from picturesque shots of the harbour, Will Ferrell’s character takes to the town’s central Húsavíkurkirkja church, built in 1907, to ring the bell once he finds out that Fire Saga have been selected to compete for a place in the contest.

Travel North, recommended by Visit Húsavík, are now offering a walking tour of all the major sites that appear in the film. Keep an eye out for the Húsavík Academic Center (HAC), where the exterior shots of the town's fictional pub, Captain's Galley, were filmed. The walking tour also includes a visit to the oldest house in Iceland, built in 870AD by Garðar Svavarsson. You can even sneak a peek at Lars’s childhood home from the film.

P.S. Húsavík also gets name-checked in the finale song, Húsavík (My Hometown), which Sigrit sings on the Eurovision stage. 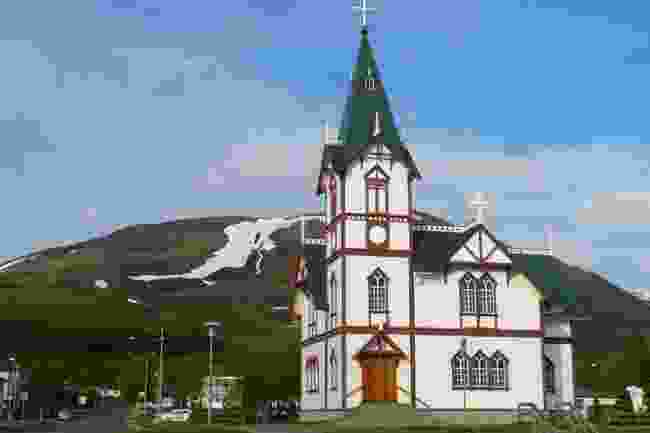 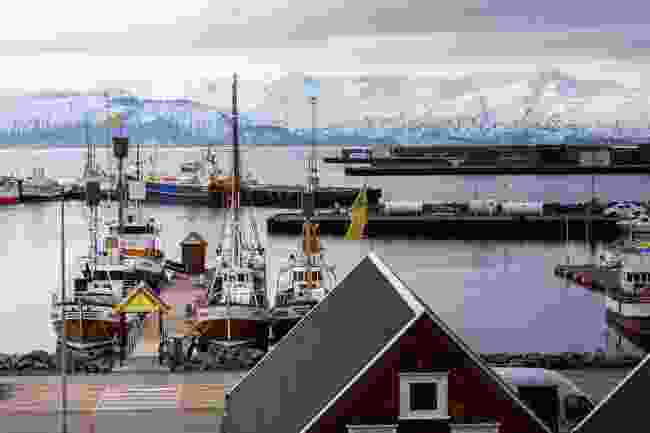 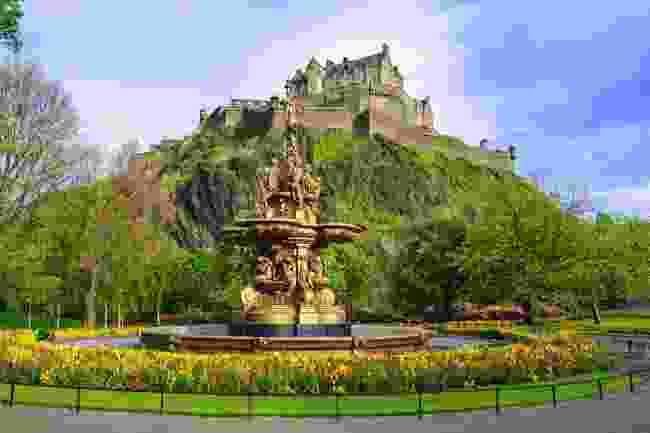 The majority of noteworthy, must-visit locations are in central Edinburgh, which is where Fire Saga must travel to take part in the Eurovision Song Contest.

Of course, fans of Eurovision will know that the city hosted the real contest back in 1972, but filming for the fictional version took place over several weeks in October 2019. Many locals noticed that Eurovision banners had been propped up all over the city.

One of the film’s scenes takes place with Lars sat on the side of the Ross Fountain, with Princes Street Gardens behind him and Edinburgh Castle looming over in the background. In another, Lars and Sigrit ride on Segways to Calton Hill, and sit atop the hill on a bench.

Lars and Sigrit stay in a hotel on Albany Street, while numerous exterior shots of the colourful, winding Victoria Street, Arthur’s Seat, the nearby Grassmarket and the famous Royal Mile can be seen, too. 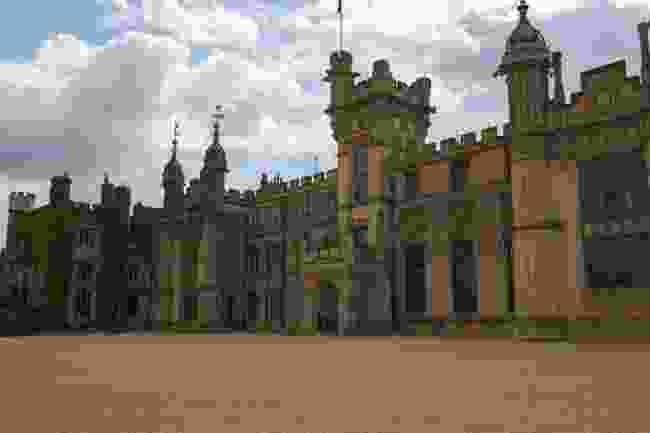 If you’ve watched the film, you’ll be well acquainted with Dan Stevens' notoriously camp character, a flowing-haired Russian singer called Alexander Lemtov. During the film, he takes Lars and Sigrit to his lavish home for a party – which is filmed here, at Knebworth House.

Located in Stevenage, Hertfordshire, this stately home and its surrounding gardens are Grade II-listed and date back to the Tudor times. However, film and TV fans will want to check it out for its on-screen history alone – Knebworth House has been seen in Harry Potter and The Goblet of Fire (as the Yule Ball staircase), the 1989 Batman movie (as Bruce Wayne’s manor) and The King’s Speech (as Balmoral), among countless others.

Nearby in Hertfordshire are the Warner Bros Studios, where numerous scenes were filmed, according to IMDB. 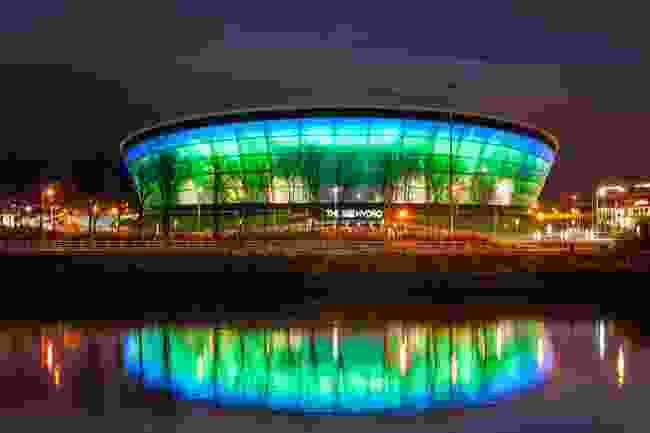 Though the Eurovision Song Content is supposedly taking place in Edinburgh, the lit-up stadium we see on screen is actually the SSE Hydro in Glasgow, Scotland’s second largest city. Airport scenes (of which there are several) were also shot at Glasgow Airport. 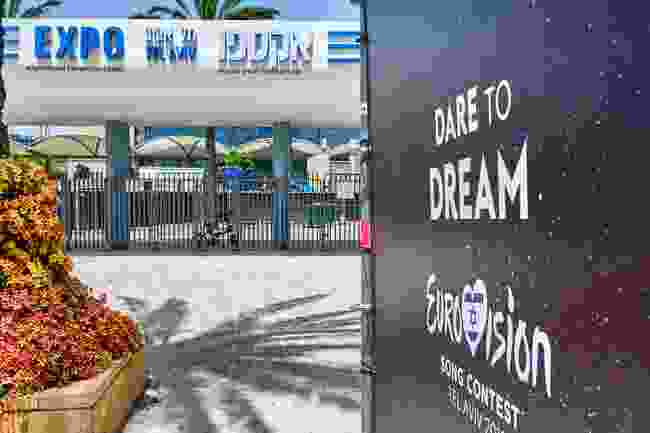 A glimpse of Tel Aviv during Eurovision (Shutterstock)

To complete the picture-perfect Eurovision illusion, some footage was used from the actual 2019 Eurovision Song Contest, which was held at the Expo conference centre in northern Tel Aviv.

Conway Hall, in Holborn, central London, makes an appearance in the movie as the location of the Icelandic Song Contest, where Lars and Sigrit must prove they are the duo to represent the country in Scotland.

Throughout the movie, we see clips of Lars and Sigrit performing at the local pub Captain’s Galley, particularly the somewhat viral song Ja Ja Ding Dong. Interior shots for this scene were filmed in the Surrey village of Chobham, at the local rugby club.

Where was Downton Abbey: A New Era filmed?

24 films to take you around the globe