Europe is dotted with chapels decorated with human remains. Here are six that prove that bones don't need to be boring

Just around the corner from the Spanish Steps, in a crypt underneath the Santa Maria della Immacolata Concezione dei Cappuccini church, this ossuary is arguably the most famous in Europe.

It comprises of six chapels, each decorated in a particular style, using the bones of over 4,000 monks that died between 1528 and 1870. Particular bones are used to create ornate patterns on the walls or ceiling. One chapel focuses on a reclining skeleton, still wearing his red Capuchin robes.

In the final chapel, a sign hangs with a final warning from the industrious monks.

So that'll be nailed to a wall, arranged  in a nice pattern. 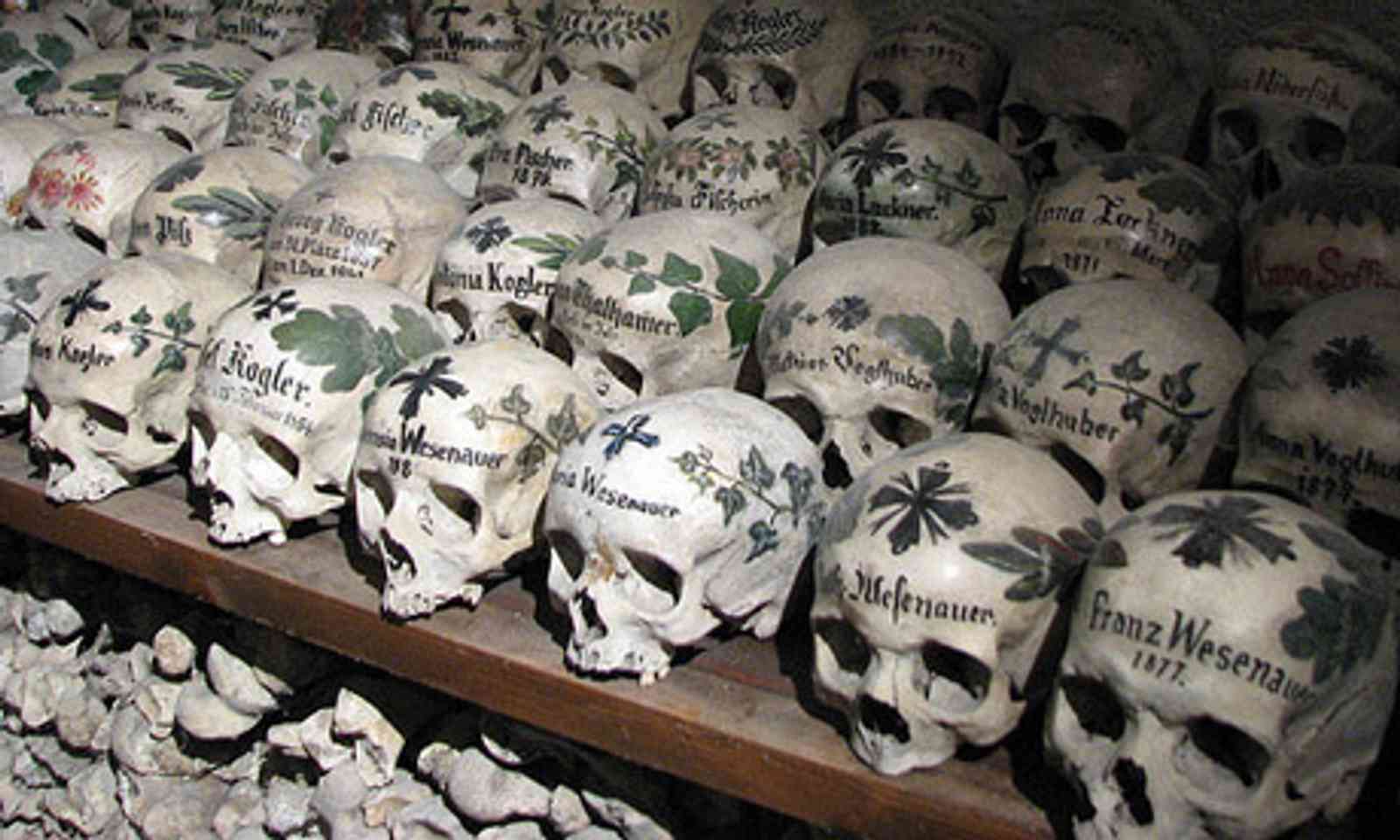 While the monks in Rome had typical Baroque inclinations, their brethren in the Hallstatt Beinhaus (Bone House) in Austria were more influenced by the Edelweiss school of art. They chose to decorate the skulls of the  deceased with pretty alpine flower motifs.

In Austria, graves are rented. And in Hallstatt, the rental period is only ten years. Once the time is up, the bones are exhumed and moved to a karner, or bone house.

Although the last skull in the Hallstatt ossuary was placed there in 1995 (belonging to a woman who had died in 1983), there are still requests from individuals to have their skulls dried and decorated in the 'Gothic Heidi' style.

There's no accounting for taste. Even in the afterlife. 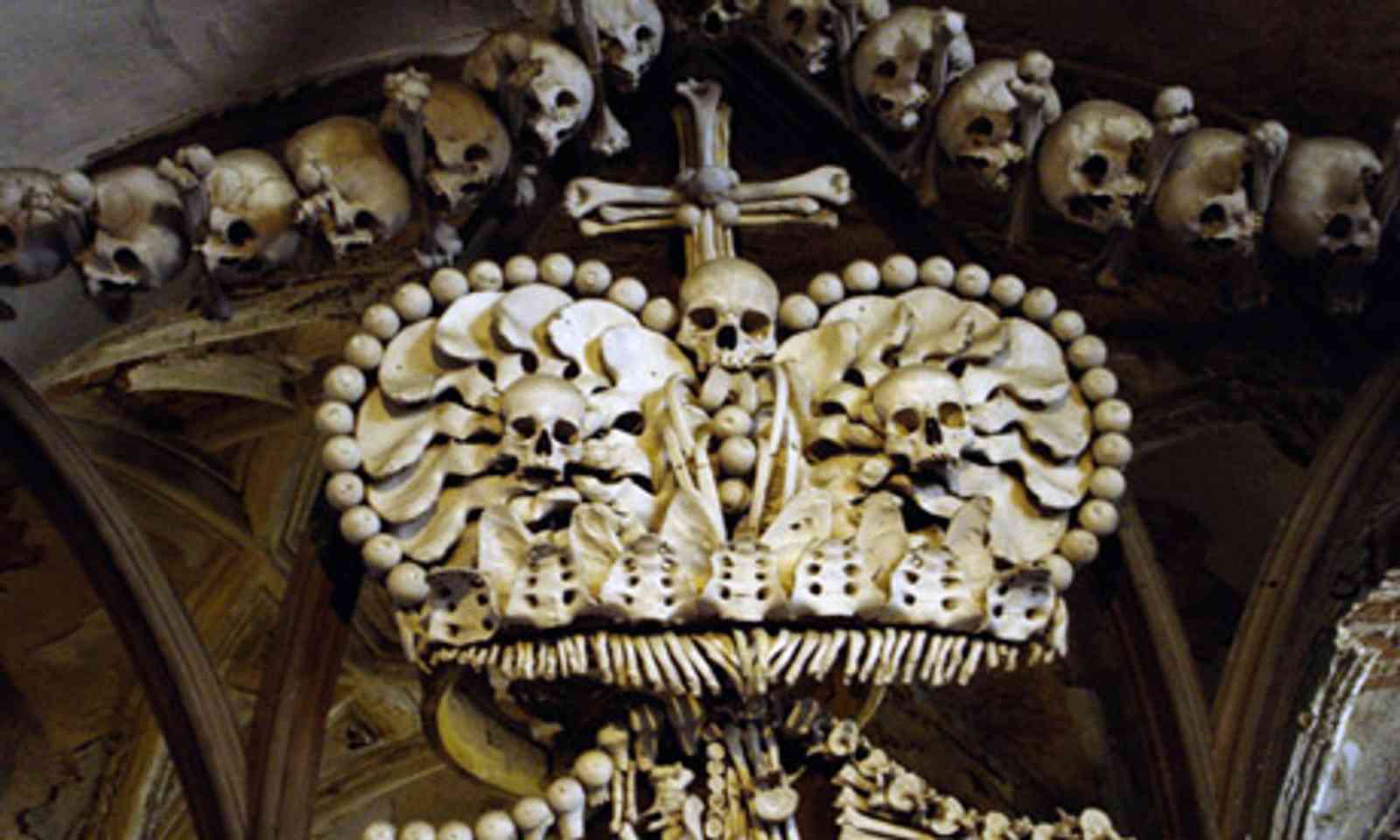 Once a booming silver town, Sedlec, near Kutna Hora in the Czech Republic, is now famous for the elaborately arranged bones on display in Gothic Church of All Saints.

When the Abbott of Sedlec returned from a diplomatic mission to Jerusalem in 1278, he sprinkled a bag of topsoil from the Holy Land over the cemetery. Soon every two-bit noble in Central Europe was begging to buried there. By 1318, 30,000 bodies were interned there. And in 1400 a church was built to house the bones from abolished graves.

The task of moving the bones was initially left to a half-blind Cistercian monk. But by 1870 a Czech wood carver, František Rint took over and started arranging the bones in a more flamboyant manner. His most famous 'installations' are the coat-of-arms (and legs) of the Schwarzenberg noble family, made from the bones of family members, and a chandelier made up of every bone in the human body. 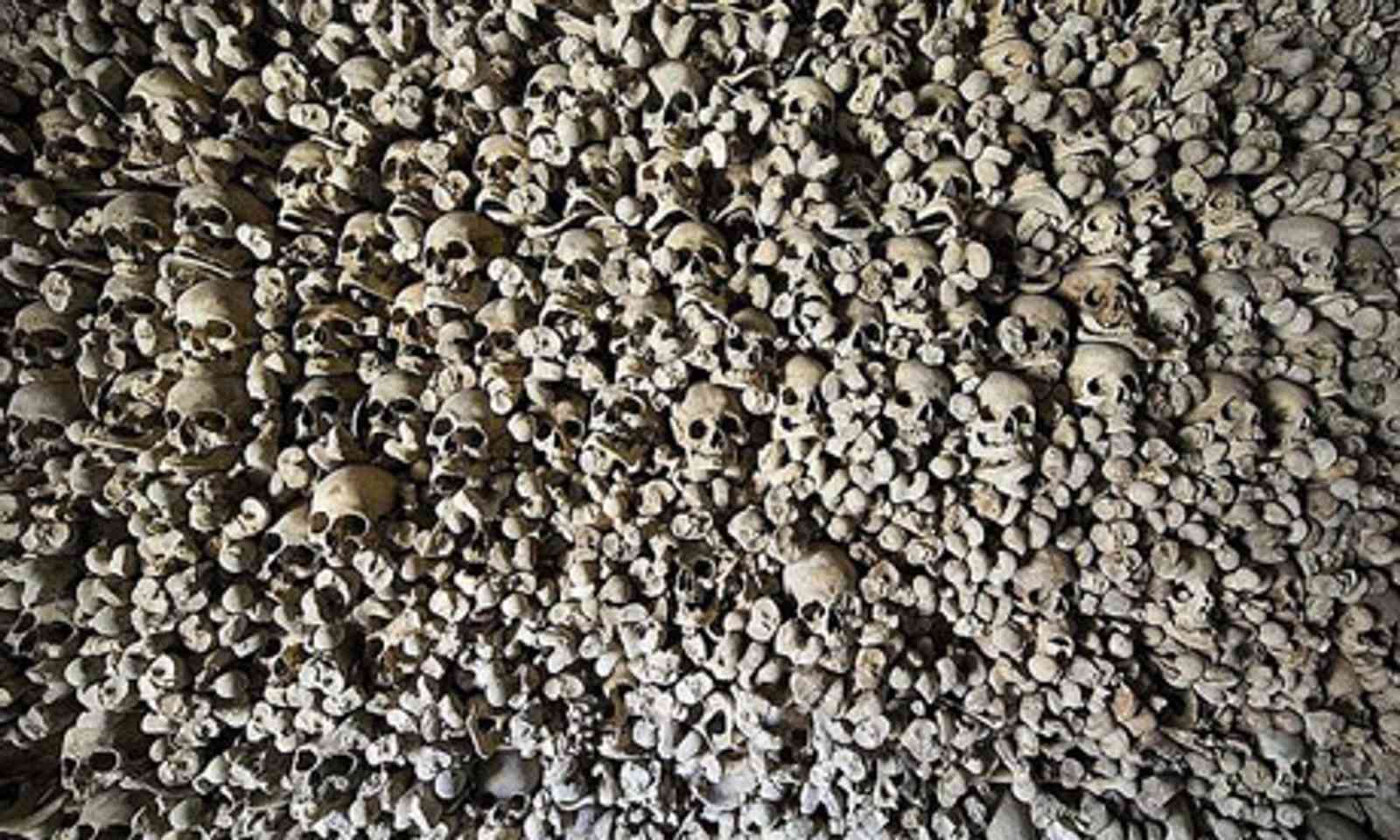 This ossuary in the Church of Santa Maria in Wamba, just up the road from Valdavoid, was the Walmart of medieval cemeteries. It pioneered the 'Stack'em high' philosophy that saw them squeeze the skeletal remains of thousands of parishioners in a tiny space.

No attempt was made to be artistic. They simply stacked the bones in indiscriminate piles.

Researchers have studied the bones and learned much about medieval life in this part of Spain. But such was the haphazard methods used by the stackers, they are yet to put together a complete skeleton. 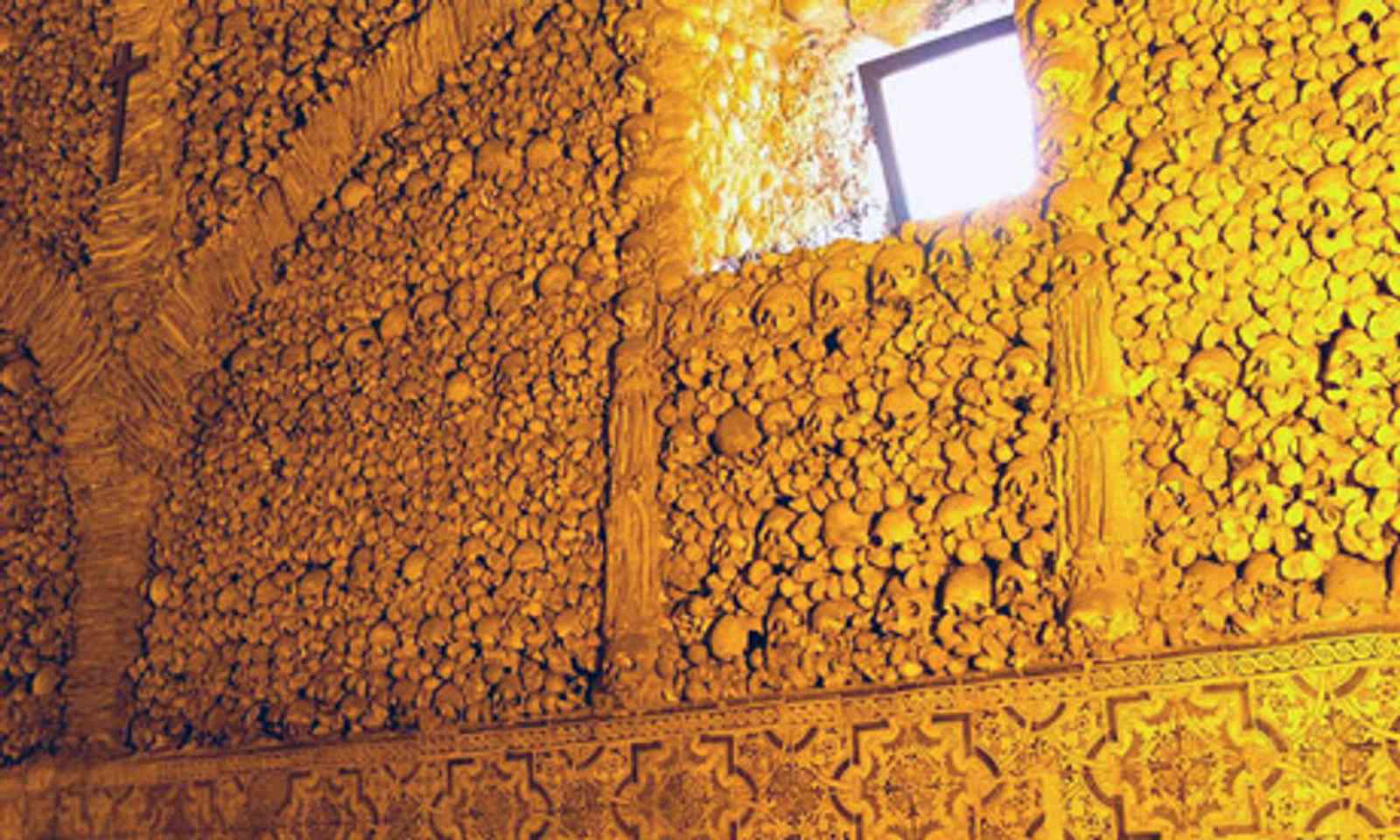 The walls of the Church of St Francis in Evora may not have ears, but they've got pretty much everything else. Skulls, tibias, fibias, you name it. The Capela dos Ossos (Chapel of Bones) is literally held up by the skeletal remains of over 5,000 of its former, faithful parishioners.

The chapel was in the 16th century to illustrate how short life is. “Where are you going in such a hurry, traveller?” reads a poem posted at the entrance of the chapel. “Pause … You have no greater concern than this one.”

Like holding up the roof from now 'til eternity. 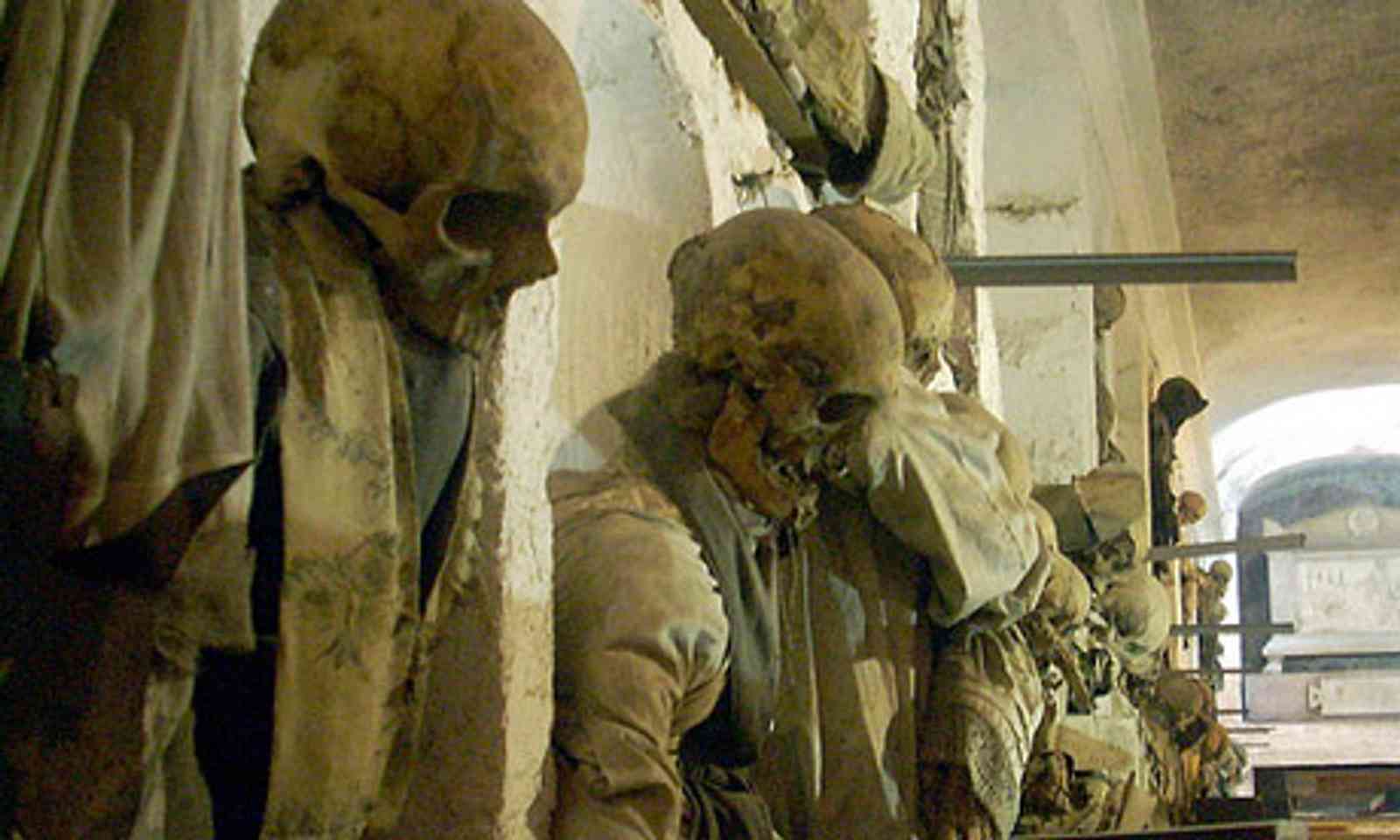 While the Capuchin monks in Rome liked to arrange bones, their brothers in the south preferred taking a more mafiosa-style approach, tying fully-dressed corpses to the walls. They also employed a unique mummifying technique so that many of the deceased on display still have skin and hair.

The skeletons are arranged by sex, age and profession. Some are displayed so that it looks like they are chatting with each other.

Indeed, some of the monks that work there today believe that some of the skeletons are 'talkers', enchanted messengers keen to share words of wisdom from beyond the grave.

Keep on the right side of 'The Family', for instance.