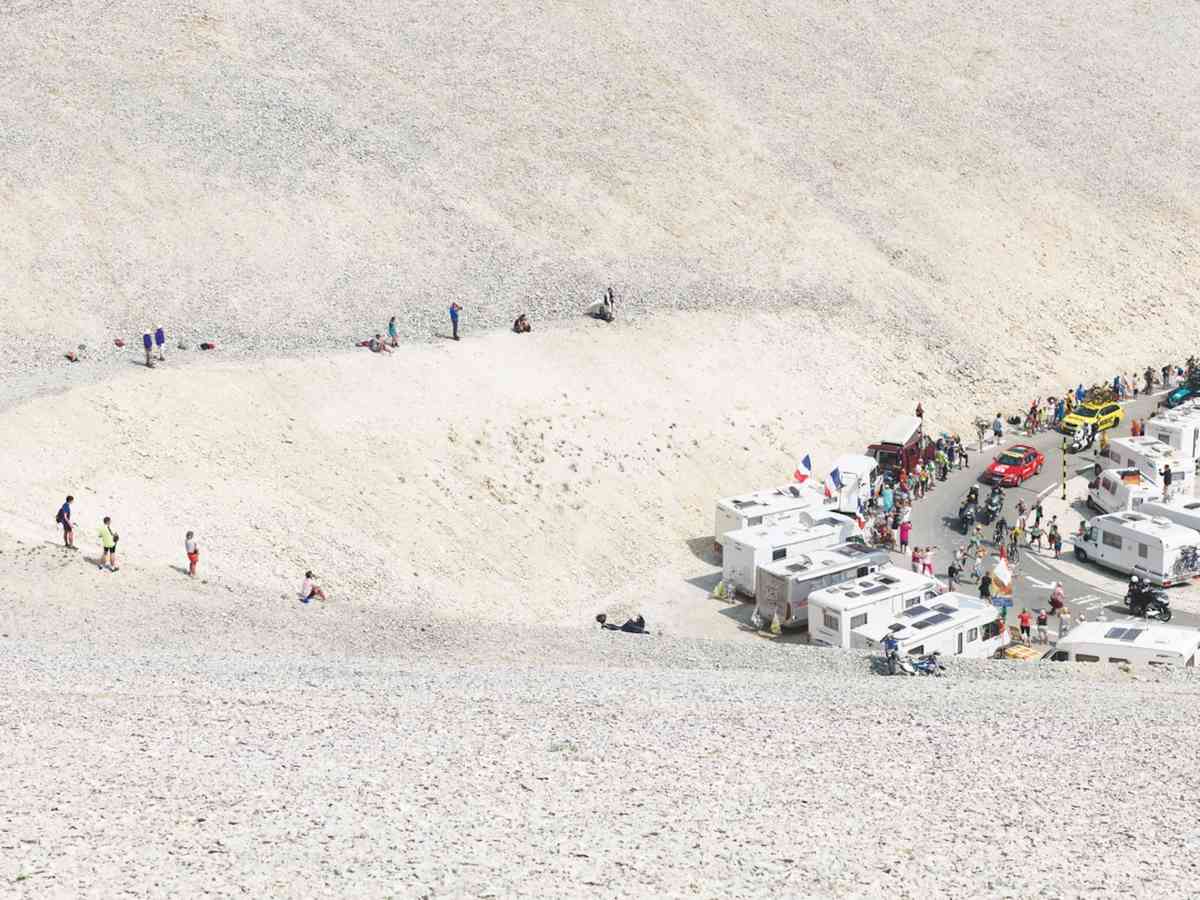 All climbs are different but nothing compares to the ‘Beast of Provence’, which looms above the Vauclause region in France. It gets its other nickname, the Bald Mountain, due to the absence of trees or any vegetation on its upper slopes. The revealing craggy limestone scree is reminiscent of a lunar landscape and makes a fitting location for the 1960s weather station, which sits perched on the top, like a space rocket waiting to blast off.

For cyclists, the mountain has a reputation for being extreme and potentially deadly; it’s where Tommy Simpson, one of England’s greatest cyclists, died from exhaustion in 1967. The lower wooded slopes lull cyclists into a false sense of security. It’s not until you reach Chalet Renard, two thirds of the way up, when the trees disappear, that the true character of the mountain is revealed.

Without any protection you are exposed to the elements. In summer, the scorched white limestone rock reflects back the heat, which mixes with the mistral wind to create an environment similar to riding in a hair dryer. In the winter, the culmination of altitude and a wind chill factor drop the thermometer well down into double negative figures. It’s no wonder the French Foreign Legion use this mountain for training purposes and it’s considered one of the ultimate challenges for a cyclist. 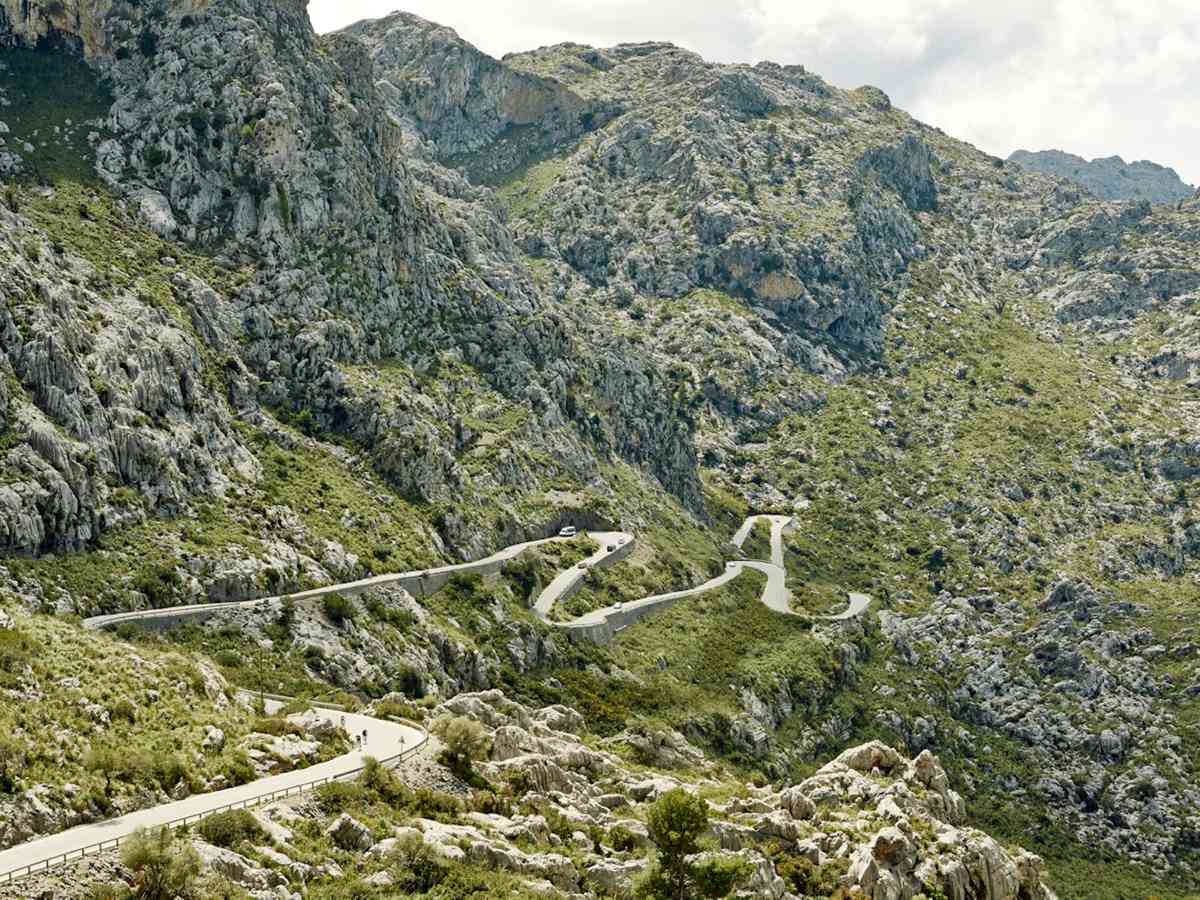 Sa Calobra is actually the name given to a small fishing village located at the base of the Tramuntana mountain range in the north of Majorca. However, it’s also widely used to describe the fearsome 2000ft climb that winds its way up from the sea and joins the main road that runs along the length of the Tramuntana range.

Translated, it means ‘The Serpent’ which is fitting given the 26 hairpin bends and spiral bridge that make up the six-mile ascent. Designed by Italian engineer Antonio Parietti, the road snakes its way down to the sea through the limestone bedrock and is officially named the Coll del Reis. It has become a go-to destination for thousands of cyclists that flock to this Balearic Island every spring for the mild weather and good roads.

Seen as the second toughest climb on the island after Puig Major, many pro riders test their early season form training on this climb, followed a few months later by thousands of English and German amateur cyclists. The port is also popular with tourists keen to visit the spectacular beach at its base, resulting in the narrow road being invariably clogged with coaches, cars and cyclists all trying to make their way up and down this dead end road. 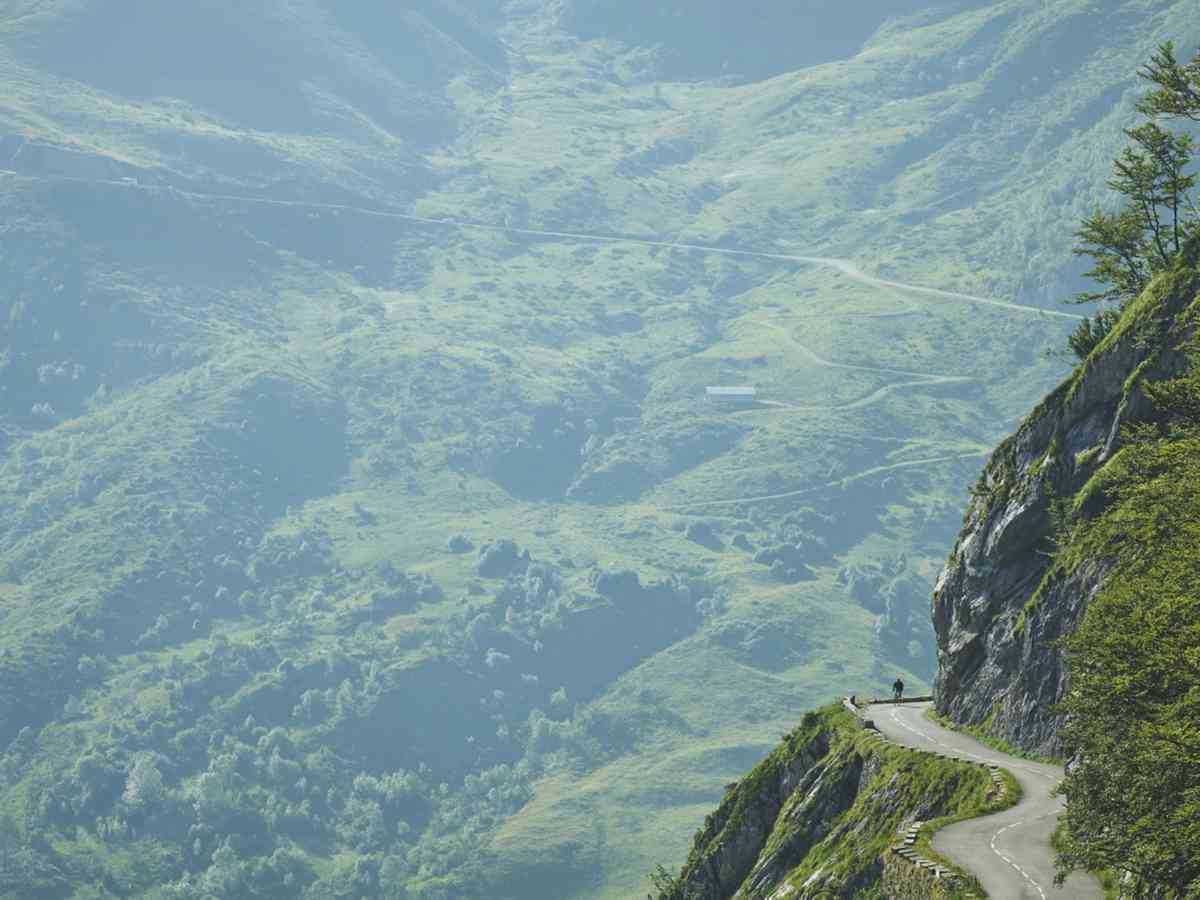 With its geographical position in the Pyrenees, between Laruns in the West and Argelès-Gazost to the East, the Col d’Aubisque is the last climb in what’s affectionately known as ‘the Circle of Death’, a route that first tackles the Col de Peyresourde, Col d’Aspin, Col du Tourmalet and the Col du Soulor before this final climb. It forms what has become a classic Tour de France stage that first appeared in 1910.

For a cyclist, it is one of the hardest climbs to tackle as it is classified ‘Hors Category’, which in cycling terms means it’s one of the highest (1709m). The rewards at the top are stunning views across the Pyrenees, three super-sized bicycle statues and a good café.

From a photography perspective, it has a bit of everything: lush Pyrenean meadows that catch the end-of-day light, cattle and ponies grazing and wandering freely, two narrow tunnels bored into the shale bedrock, and a road which hangs precipitously to the slope of the  Cirque du Litor. All these elements make this a very photogenic mountain. 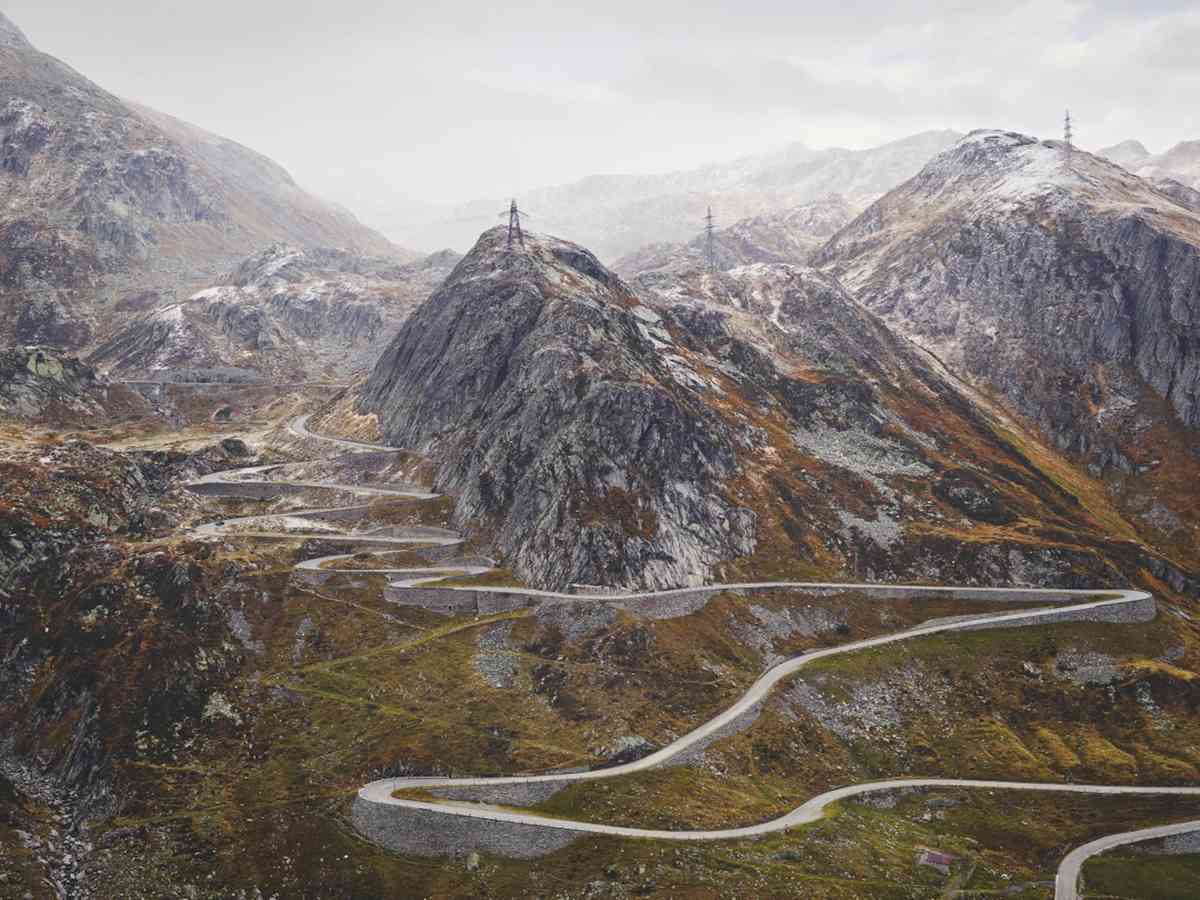 Some mountains are famous for the races that have passed over them and the history that’s subsequently connected to them, while others are famous for their length, gradient or sheer difficulty. The Gotthard Pass is neither of these, but it is perhaps one of the most beautiful mountains to photograph.

Nestled in the Swiss Alps and close to the border with Italy, the old road is an engineering delight. Opened in 1830, it connects Airolo in Italy with Andermatt in Switzerland, and is constructed from granite cobbles laid down in beautiful interlocking crescent fans along its length.

It’s not until you stop and consider that every cobble set was hand-crafted before being laid that you really start to appreciate the engineering feat. The frequent twist and turns that are required to negotiate the topography only adds to its charm and makes it a photographer’s dream. For cyclists, the experience is a little different: cobbles, usually associated with Flemish roads, are neither easy to climb or descend. You could say this road is better to look at rather than to ride. 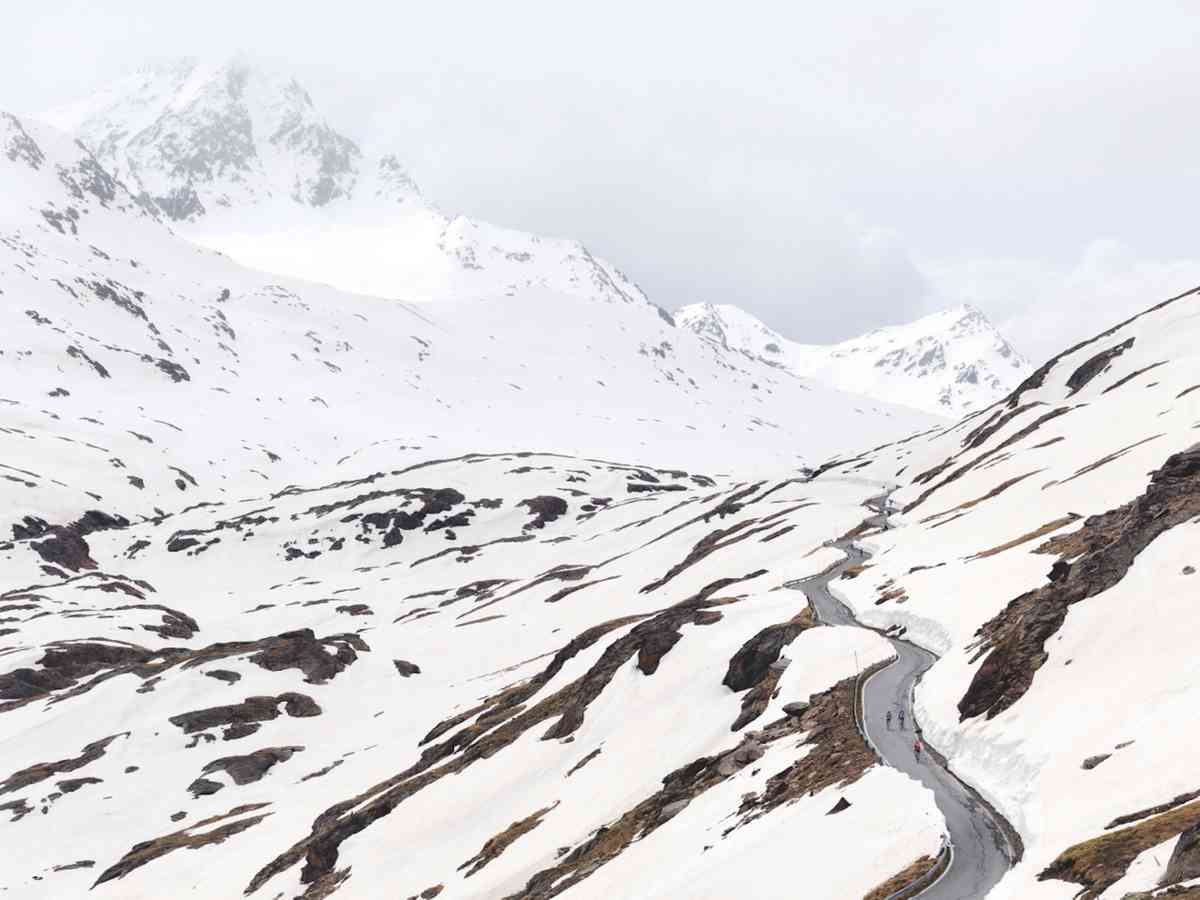 To cyclists, this climb is defined by one day during the 1988 Giro D’Italia when the race passed over it during a snowstorm. It was described as “the day strong men cried” and is considered by many cycling aficionados as the toughest day the pro peloton has ever endured on a bike.

By this point, the race for GC had boiled down to three riders: the Italian Franco Chioccioli, Dutchman Erik Breukink and the American Andy Hampsten. A showdown was expected on the Queen’s stage over the Gavia in the heart of the Dolomites. That morning, the riders woke up to dark clouds and rain in Selvino, a portent for far worse conditions on the higher grounds.

By the time they reached the bottom of the last climb, the Gavia, they were already frozen and snow was falling. Hampsten had grown up skiing and had prepared better than most, and wore a snood around his neck and thick ski gloves to keep out the cold. On the lower slopes he attacked and rode clear, and by the time he reached the upper gravel road, a blizzard had enveloped the race.

Riders became unrecognisable as snow covered their hair and torso. Getting to the finish was the only objective for most and there were reports of riders peeing on their hands to warm up their frozen fingers. With little support from team cars, riders descended without rain capes and were unable to steer or brake due to frozen limbs. Breukink won that stage, but Hampsten did enough to win the Giro and a place in history.

The images from the Gavia that day have defined the mountain and given it a place in cycling history. Even today when you climb the Gavia you enter it with a sense of foreboding. 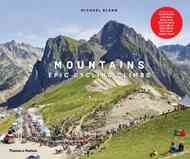 Michael will also be displaying a selection of his images at the Rouleur Classic, taking place from November 3-5, 2016, at Victoria House in London. For information and tickets, see rouleurclassic.cc