Liz and Jamie risk sailing at night, and are rewarded with a magical experience in tropical waters after dark

Our intention was to get some kip before setting off the next day to the halfway anchorage at Ko Phetra, roughly 30 miles due south. From there we would head over to Koh Tarutao the following day, where we would spend another night before making our way to the boatyard at Chebilang. But, as has been said on many occasions in the yachting world, a sailor’s plans are set in jelly. After a fish supper, a new one was forming in my mind.

“What about leaving now, and sailing through the night directly to Tarutao?” I said.

Jamie mopped up the last of his bream.

“It’s a calm night, and the moon is full, so it would be easy going, and save us a day,” I added.

With the tripper boats safely tucked up for the night, Thailand’s fishing fleet usually sets off at dusk. Depending on the time of month and year, they might be after squid, shrimp or anything unwise enough to swim into their nets.

The fishermen use any colourful lights they can find going cheap in the market to illuminate their boats, the configurations of which you won’t find in the COLREGS (International Regulations for Preventing Collisions at Sea).

The responsibility is on the shoulders of the visiting yachtie to work out if a net is being trailed and in which direction it might be moving. And, with experience, to work out what something like an array of brilliant green lights might mean – a squid fishing boat at anchor. 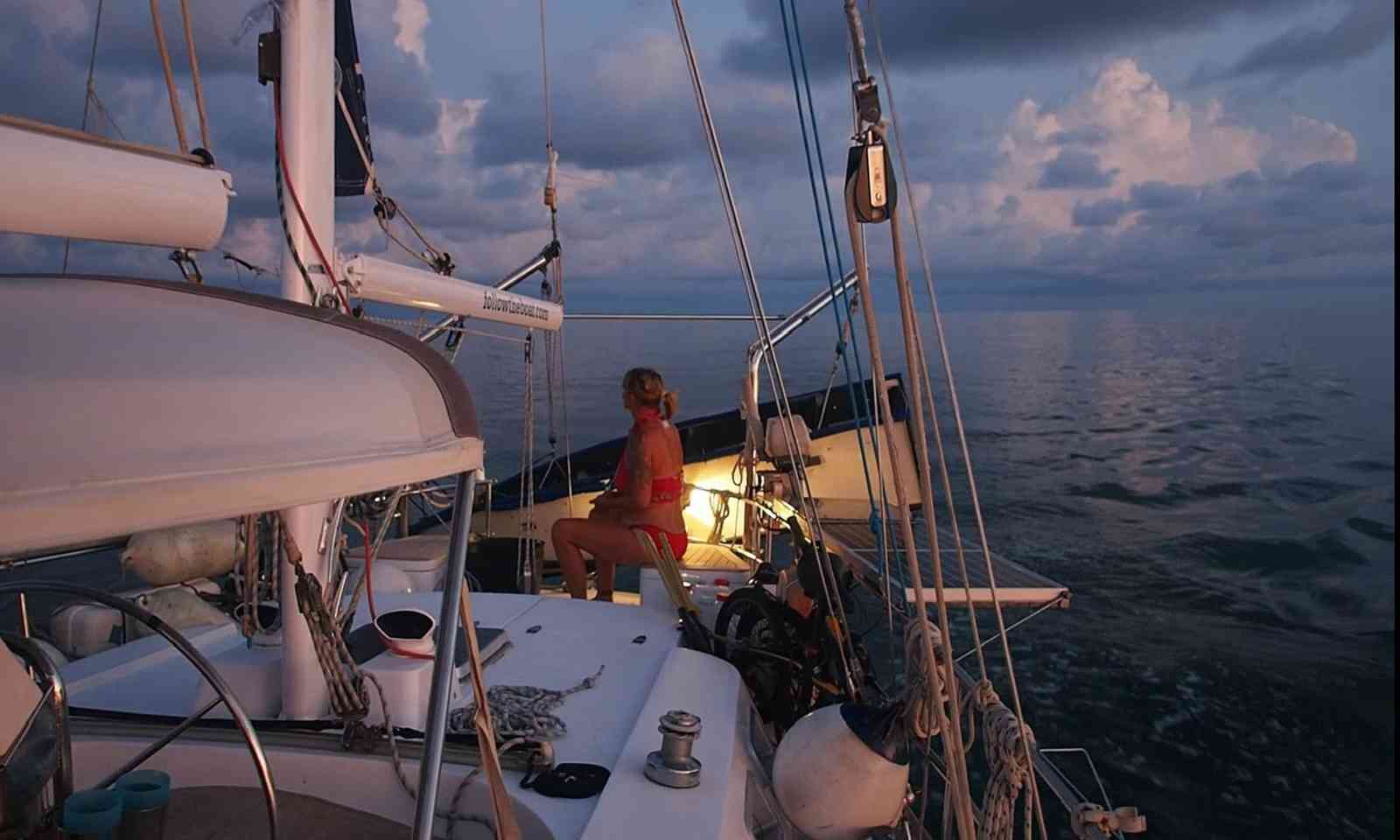 Another problem with sailing at night is the likelihood of hitting something: a floating plank of wood might skewer your hull; fishing nets and fish-trap floats can get stuck in the prop, snarling up the engine; it has even been known for yachts to hit the odd vessel.

Some of the smaller boats – usually long-tails – use no lights at all, only switching them on as you are almost on top of them. They are easy to avoid if you know what to look for and are under engine power. If your boat is under sail, manoeuvres take much longer and can lead to moments of terror for an unsuspecting crew.

“It’s a clear sky with a full moon, so there will be fewer boats about,” said Jamie, recalling how the full moon tends to mean less fishing in these parts.

“And we’ll have good visibility.”

That settled it. After a couple of black coffees we released SY Esper from her mooring line and left Ko Rok, using the GPS track we had arrived on to navigate safe passage through the reef. The sea was flat and the sky clear as we began to motor south. There were a few white flashes on the horizon, typical of the rumbling squalls at this time of year.

Sometimes, if you have enough time to work out their size, trajectory and speed, it is possible to dodge storms. On this occasion we tracked them with a new radar system, but two years ago, during our trip from the Maldives to Malaysia across a storm-ridden Indian Ocean, it had been impossible to avoid them. There were so many that we had learned to embrace and make use of the powerful wind they brought with them to boost our speed.

You just have to hope you don’t get struck by lightning, because if you do the boat’s electrics and electronics – including all instruments like radar, GPS, chart plotter etc – will be taken out. To this day, sailors will lock in the oven all phones, tablets, PCs, cameras, VHF hand-helds and other portable devices when lightening approaches. The oven acts as a ‘Faraday Cage’ (full metal box) allowing the current to flow round the outside without damaging its contents. 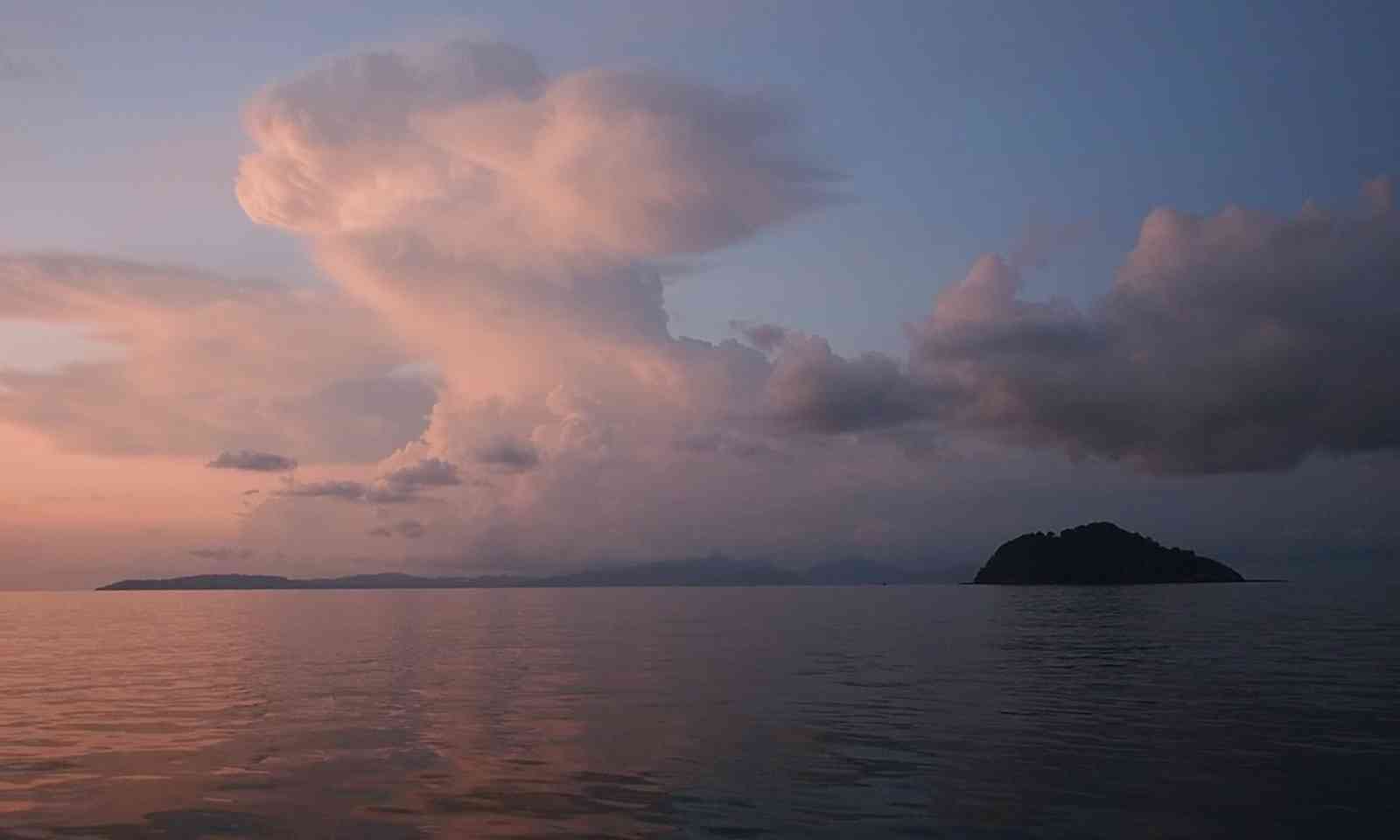 Despite the radar, we ran through a few storms on our way south, but they only lasted for a couple of hours and were followed by piercing moonlight. After an atmospheric voyage past floating villages of fishermen rafted up in their long tails, the rocky Bulon islands appeared on the horizon.

At sunrise, we made our final run down the east side of Koh Tarutao, crossing a commuter belt of now speeding long-tails on their way to work on the mainland. They waved as they buzzed us, and I called out “Sawadee kha”!

Tarutao is Thailand’s first national marine park, and is still largely untouched because tourists seldom reach this remote southern area. Once a penal colony, undesirables were cast away and left to form their own ungoverned community. With the island’s unforgiving tropical rainforest, strong tidal currents and fierce salt-water crocodiles, escape was impossible.

Nowadays, the only residents are a few rangers who take shifts at the stations on land, and a community of Chao Ley (sea gypsies) who live on the water. Many of the subspecies of wildlife are peculiar to the island, and a tiny population of shy, critically-endangered crocs are still rumoured to inhabit its swamps.

We longed to go ashore and explore, but since we were only there for a day, and were tired from the long passage south, we let the tropical dawn chorus sing us to sleep. We vowed to come back and spend some significant time there.

Despite Millie (our cat) looking startled at every noise, we saw no sign of saltwater crocodiles.


Throwing out the rule book in paradise – Liz Cleere