Meeting the Moai of Easter Island

As soon as I walked into the arrivals hall, I was lassoed by a garland of exotic flowers. It was as if I’d emerged into a colourful village market in full swing. Loud and exuberant reception parties of relatives welcomed home returning islanders, and eager tour operators hawked for business.

The airport is Easter Island’s lifeline – prior to its opening in 1961, the residents lived in virtual seclusion. Supplies came once a year by Chilean naval ship, while visitors were a rarity. 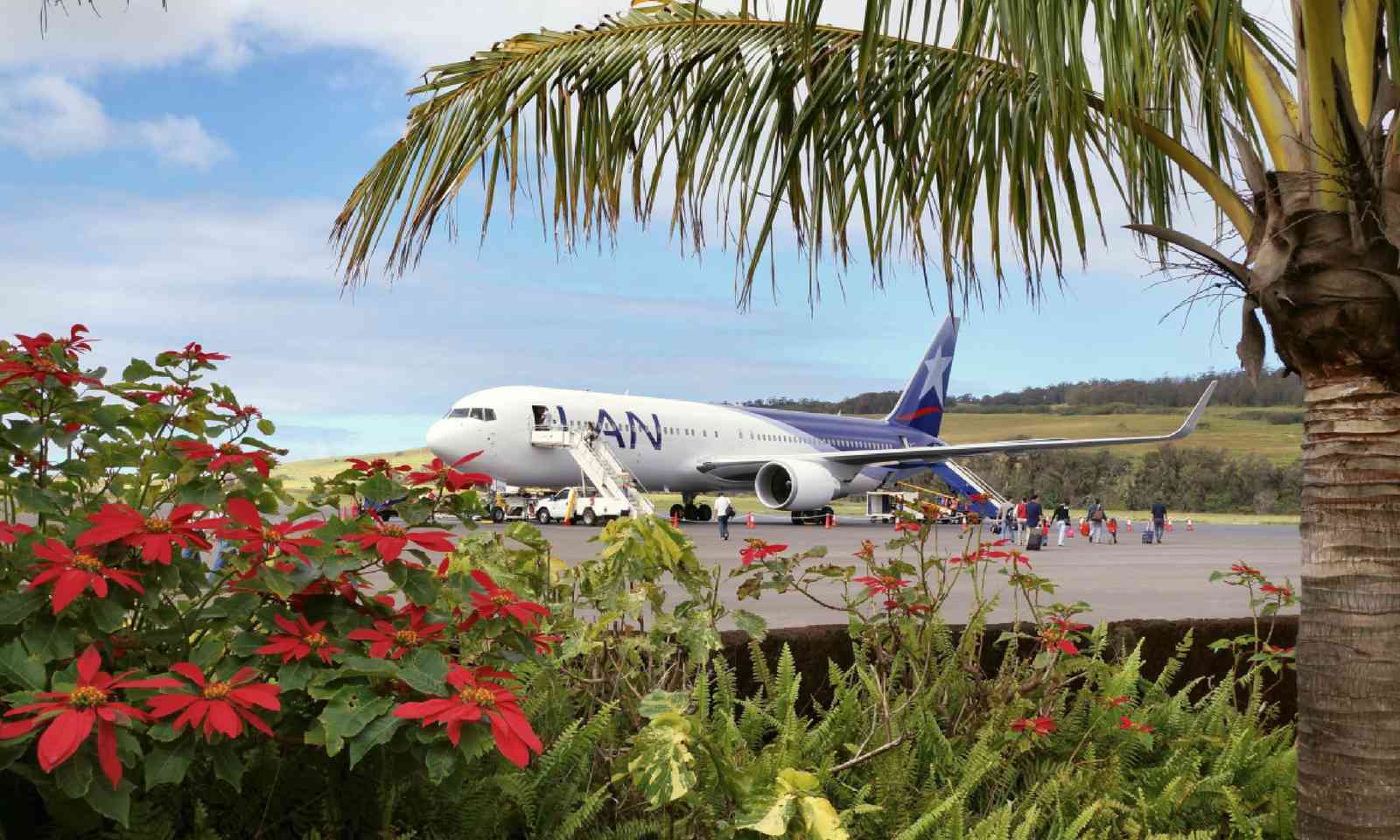 This was hardly surprising. We’d been flying over the empty canvas of the Pacific Ocean for five hours, heading ever westwards from the South American landmass, before spotting this tiny speck of land: a triangular handkerchief of rolling green, pockmarked by the dormant cones of three volcanoes and fringed by a ragged, wave-battered coast.

History of the bigheads

Easter Island (or Rapa Nui as the islanders know it) is implausibly remote. It’s nearest inhabited neighbour – Pitcairn Island of HMS Bounty notoriety – lies a further 2,112km to the north-west. Yet somehow, against all the odds, ancient Polynesian colonists found it. Travelling in double-hulled sailing canoes, at the mercy of the Pacific’s winds and currents, they located this lonely volcanic outcrop and settled here around the fourth century AD.

The fledgling community prospered. They planted yams and bananas in the fertile soil, raised their poultry, fished in the rich seas and caught seabirds from the vast colonies on the offshore islets. But as if their mere existence on this isolated pinprick wasn’t extraordinary enough, they went on to create the most remarkable Neolithic statue cult the world has ever seen.

Having settled in at the newly opened Casas Rapa Nui, I was keen to discover more about the island – past and present. The hotel has a team of well-trained local guides, designed to immerse guests in Rapanui culture, so  I headed off on an exploration of the island with ‘Yoyo’ and ‘Poni’.

Yoyo explained that almost all Rapanui have nicknames. He spoke in a deep, expressive voice, switching effortlessly between the explosive and completely impenetrable Rapanui language, heavily accented Spanish and broken English.

One of the first things to strike you about the Rapanui is that they laugh – a lot. As we drove slowly along the southern coast, our conversation was punctuated with frequent eruptions of spontaneous hilarity.

Amid the merriment, Yoyo and Poni began to tell me about their unique cultural heritage. For more than 1,000 years the Rapanui raised colossal stone effigies, the iconic Easter Island moai, to honour their ancestors and protect them misfortune. In a frenzy of obsessive construction that came to dominate all aspects of island life and only ended 500 years ago, the islanders carved more than 880 moai, chipping the vast statues from the island’s volcanic tuff using obsidian adzes. 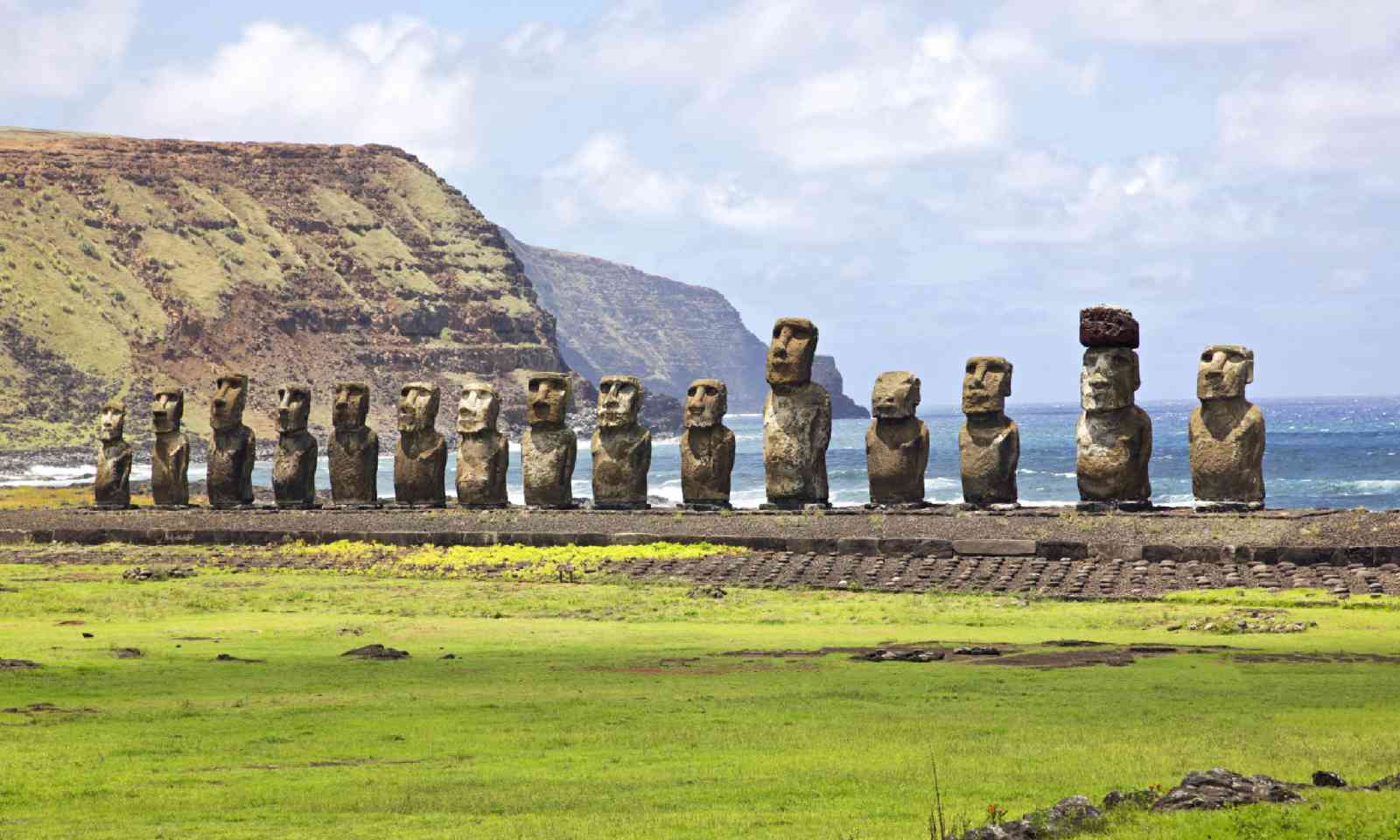 The moai weighed up to 40 tonnes and, once carved, were dragged up to 20km across the rough terrain to be raised on ahus (ceremonial platforms). For a population that reached no more than 12,000 souls at its peak, the scale of their endeavour is mind-blowing.

But in triumph lay tragedy. All of the trees were cut down for use as rollers or sleds to transport the moai. There was no more wood to build canoes, so the Rapanui could no longer fish offshore; the soil started to leach away and became acidified – people began to starve. Civil war broke out among the clans and, in a fury of tit-for-tat raids, every last moai was torn down.

All along the coast Yoyo pointed out the prostrate figures of fallen moai. Tragically, during the Wars of the Throwing Down of the Statues, many were intentionally decapitated by setting boulders underneath them as they were toppled. Only when smashed were they deemed to have lost their supernatural powers. At Ahu One Makihi, rainwater had gathered in the eye-socket of one recumbent figure, reflecting the sky above. The mystical, sightless eye appeared to provide a mirror into the Rapanui’s past.

But worse was to befall the islanders. In the 200 years following the ‘discovery’ of the island by a Dutch admiral on Easter Sunday 1722, a succession of military adventurers, buccaneers, slavers and rapacious colonial landlords ravaged, ransacked, raped and robbed the island and its once proud people. Smallpox, tuberculosis and other common diseases to which the islanders had no immunity further decimated the population.

By the beginning of the 20th century barely a couple of hundred Rapanui survived. It is a history to make you weep.

Yet Yoyo and Poni were still laughing. We had arrived at Rano Raraku, one of the three volcanic cones that erupted from the ocean bed to form Easter Island. This same volcanic explosion provided the yellow-brown volcanic ash from which the Rapanui master sculptors hacked out their great moai.

Rano Raraku’s outer slopes are strewn with heads in various stages of completion. Everywhere you look, long, haunting faces stare enigmatically out of the landscape. Stretched ears, aquiline noses and tattooed torsos rise up in a forest of statuary that looks like a cemetery of the gods.

We climbed up to the rim of the volcano and looked down on the reed-flanked lake that fills the crater. 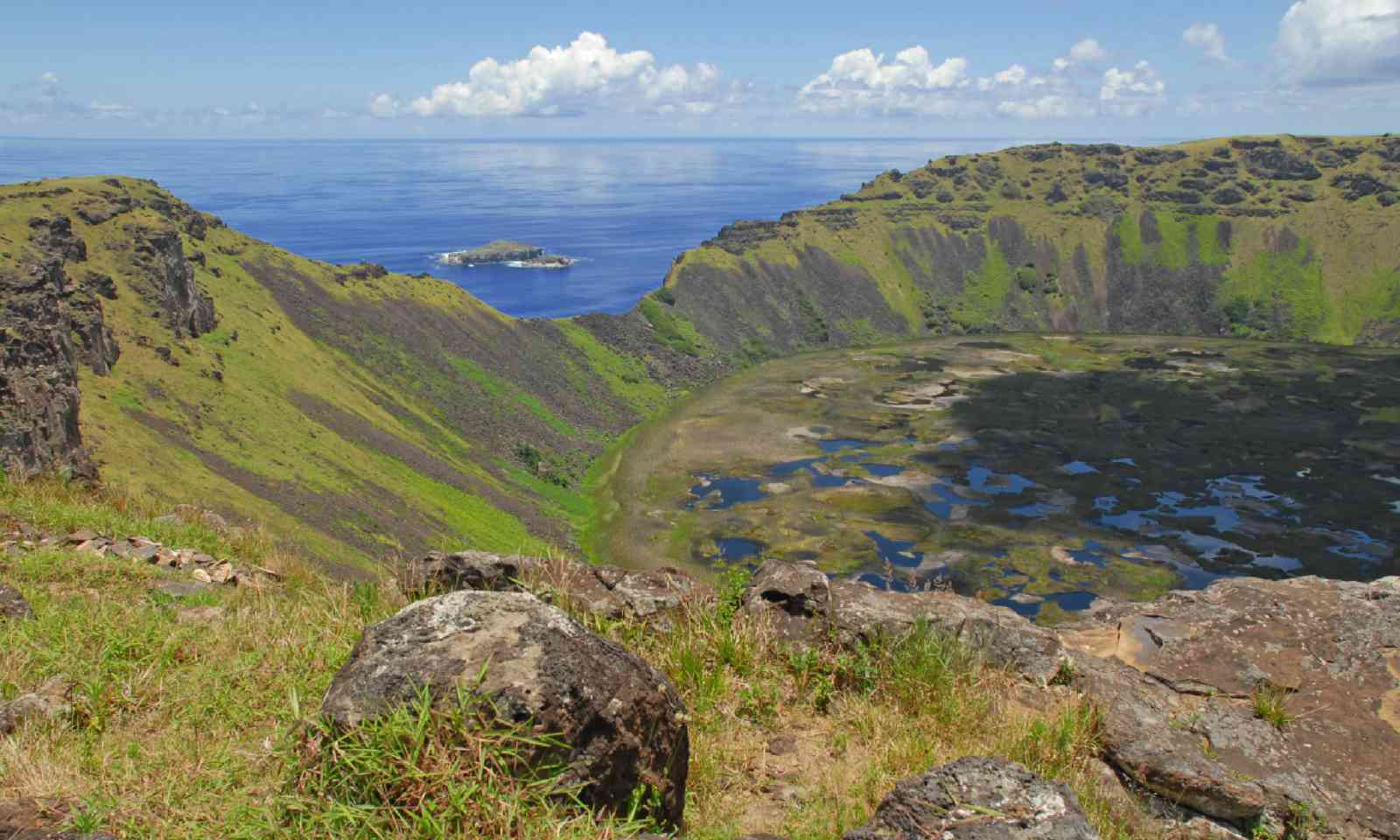 “During the Tapati Festival, we hold a traditional triathlon here,” explained Yoyo. “We race across the lake on reed rafts, then run around the crater rim carrying bunches of bananas weighing five kilos each.”

With a grin, he showed me a striking picture of himself in body paint and hampi – a leather thong – paddling his raft during the race. “It is one of the competitions that counts towards the election of the beauty queen,” he said.

With an even broader grin, he showed me a picture of a stunning Rapanui girl in traditional costume. “That is my wife – she was elected island beauty queen that year.”

That evening I went to see some of the Rapanui’s living culture. The Kari Kari perform traditional dances and songs with compelling vigour and obvious enjoyment. In a high-energy routine that had the dancer’s blood pounding and sweat pouring, the women sashayed and wiggled their hips with an elegance and allure that held every man entranced while the men strutted, stamped and pelvic-thrusted in a sexually charged version of the Maori haka.

Next morning I was collected well before dawn by Singa, one of the dancers I’d seen the previous night. He was clearly nursing a monumental hangover and blearily complained of a lack of sleep.

We drove to the far end of the island in time to watch the pink blush of dawn break over Ahu Tongariki, the largest and most dramatic of the ceremonial platforms. Tongariki’s 15 colossal moai have been re-erected on their 200m-long plinth. Standing with their backs to the ocean, glowering over the landscape, they make an awe-inspiring spectacle. 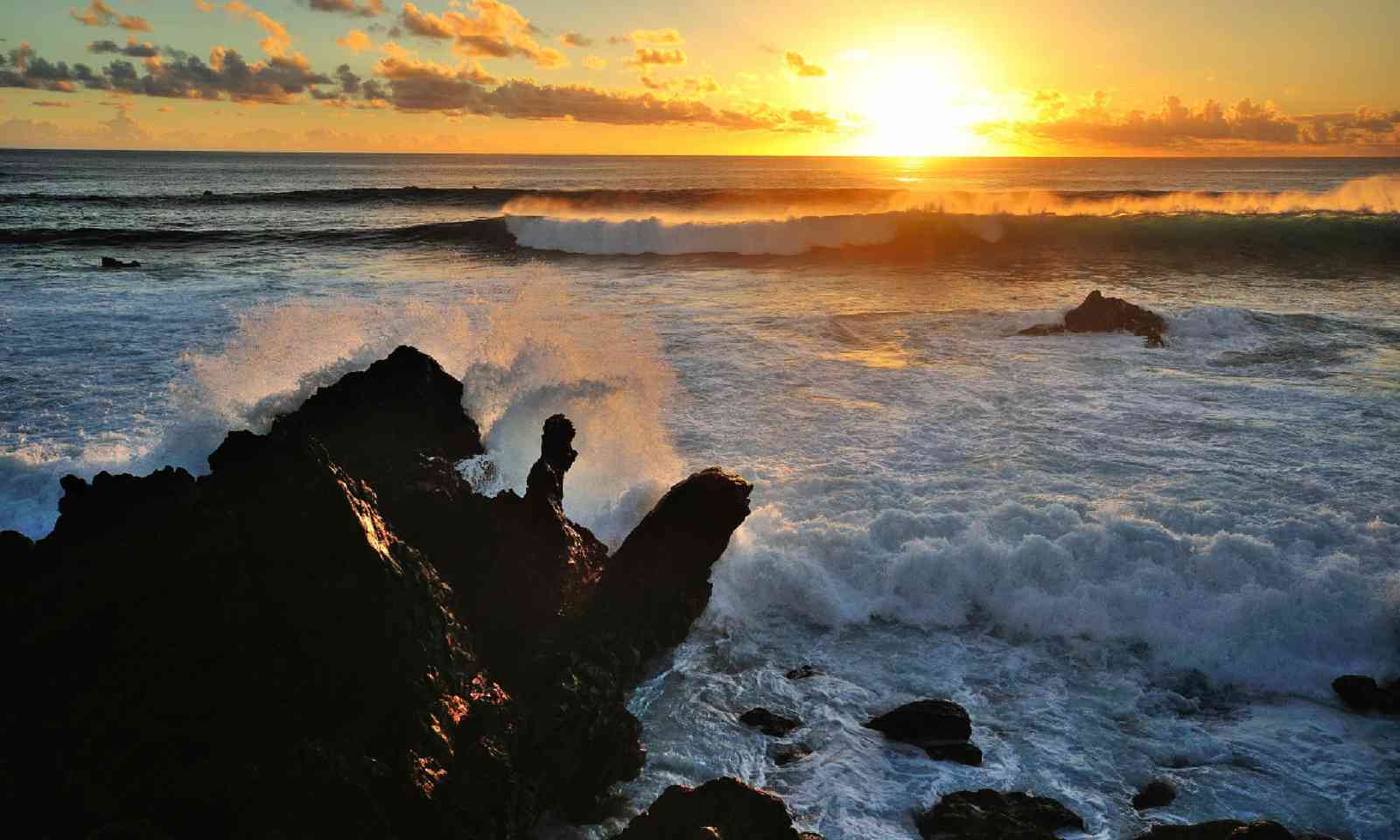 Walking around the seaward side of the ahu I came upon a small harbour, where two fishermen loaded lobster pots into their boat. As they headed out into the open water one of the men crossed himself. While Rapanui customs still draw on their traditional beliefs, today more than 80% of the islanders are practising Catholics.

Singa suggested we drive back to Hanga Roa for Sunday Mass. As we approached the island’s only church, the sound of several hundred voices singing a Polynesian hymn swelled out of the building. So many islanders were packed into the stone church that there was standing room only. Outside, old people sat in the shade talking while children played in the dusty street.

I walked down towards the harbour. Families sat on the low wall enjoying the sunshine and watching a football match. Out on the water, local teenagers were showing off their surfing prowess, riding the waves on their long boards.

On Sunday afternoons, many people leave the village and head out to the coast to fish, barbecue and party. Guides Uri and Merina took me to visit their families, who we found by a rock pool on the protected north shore. 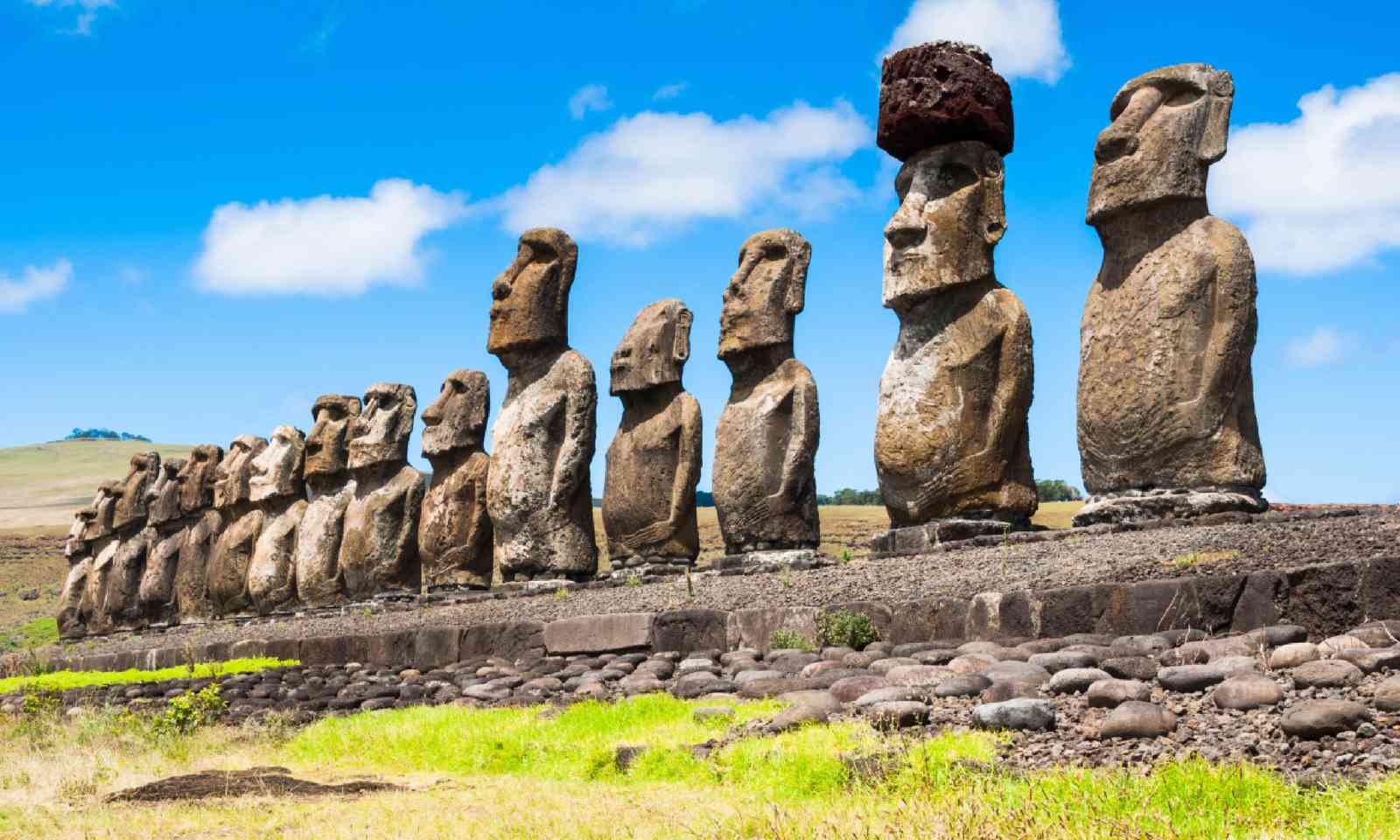 A group of women sat breaking open the sea urchins they had collected and were eating them raw with lemon juice. Others were gathered round a small fire set on the rock. Merina’s uncle plucked a fish direct from the coals and offered it to me with a half lemon and a raw banana to alternate tastes; a plastic cup of jote – red wine mixed with Coca-Cola – was pressed into my hand.

“How do you catch the fish?” I asked.

“We bait our hooks with sea-urchin flesh.” Merina’s uncle showed me a crude array of wooden fishing poles cut from the scrubby bushes we had passed on the roadside. Two of his sons were bent over some rock pools attempting to lure eels out of the cracks in the rocks, while another was expertly casting a line wound round an old tin can.

“Otherwise we like to spearfish,” he added. Watching the surf pound against the jagged volcanic coast, spearfishing seemed a brave option.

But then, it’s not an island short on bravery. The next day we trekked around the rim of Rano Kau and peered down into its vast, lake-filled crater. Here, I traced my finger along the strange half-man, half-bird petroglyphs at the ancient ceremonial village of Orongo.

With our eyes we followed the perilous route taken by competitors in the historic Birdman cult ceremonies, an ancient tradition – practised until the 1860s – to decide who would be leader of the island for the following year. Hopefuls had to clamber down Rano Kau’s sheer 100m cliffs to the ocean, swim for 3km across the rough, shark-infested sea to an outlying islet, wait for the first sooty tern of that season to lay, then return triumphant with the egg. And I’d thought Yoyo’s triathlon sounded tough.

Easter Island is principally famous for its moai, and on an island just 23km along its longest side, they are ever present. But the most remarkable elements of Easter Island are the Rapanui people who, despite all that they have suffered at the hands of outsiders, are unfailingly openhearted, warm and welcoming. The stony faces may entice people to this remote speck in the Pacific, but it’s the laughing ones that prove the real treasure.