Vast, unforgettable landscapes. Tiny remote villages. Lonely plains and the warmest of welcomes. Welcome to Route 40, the road to the clouds...

There is a sign on the baptismal font in Salta Cathedral. It warns that it’s forbidden to use the sacred water in the practising of ‘the black arts’.

The old religions are clearly alive and well in Salta province. This remote corner of north-western Argentina is probably the most traditional and timeless part of the country. Only a few of the indigenous nomads who once roamed South America survived the Spanish campaigns; of those who did, the majority of their descendents live in this wild mountain region.

Although most are nominally Catholic, perhaps even the Spanish missionaries realised that, in this land of windswept plains, icy peaks and jagged valleys, it was almost to be expected that Pachamama (Mother Earth) would maintain her grip on the local soul.

Here, you are a long, long way from chic Buenos Aires. Overlooked by all but the most determined of travellers, Argentina’s north-west is now challenging Patagonia as the country’s new frontier for adventure travel. 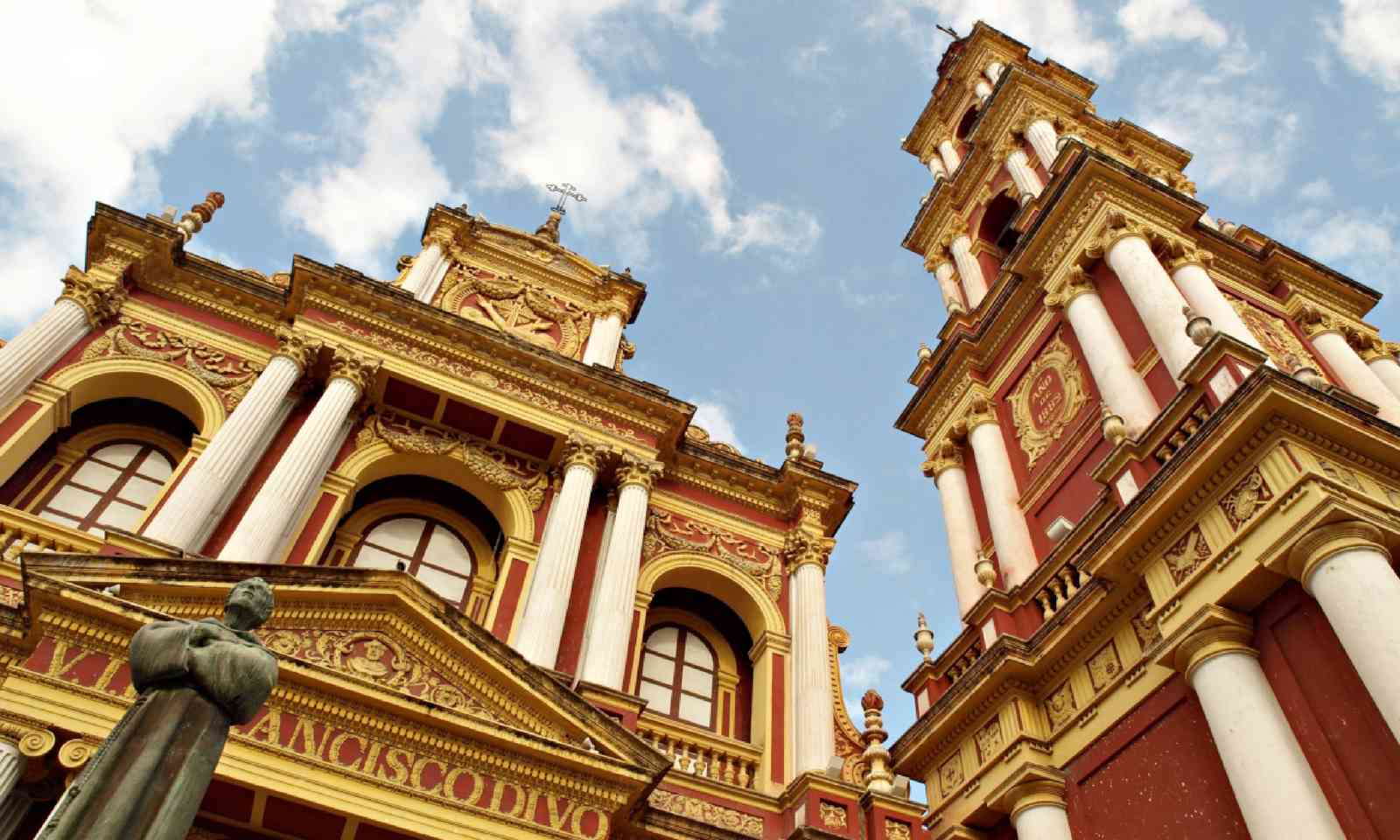 Unless you intend to visit only the big towns, however, it is a notoriously difficult region to get around. Even the seemingly indomitable Route 40 runs out of tarmac long before it reaches these latitudes. Spoken of throughout the country as ‘La Cuarenta’ (The Forty) – in the same sort of hallowed terms in which Route 66 and the Trans-Africa Highway are discussed – Route 40 runs from Tierra del Fuego all the way to the Bolivian border.

But here, in the sparsely populated north-west, Route 40 becomes ‘the road to the clouds’. It is rarely more than a humble dirt track and the only sensible way to drive it is with a sturdy 4WD. Which is what I hoped I had, having joined a Land Rover expedition along ‘the highest road in the Americas’.

Our convoy followed Route 40 on a spectacularly snaking, switchback course from the town of Cafayate to Salta, the provincial capital. Cafayate is a pretty place of pastel houses and palm-shaded plazas; the area was once occupied by the Quilmes people, who farmed the land and paid tribute to the Inca kings. Today, nothing remains of the Quilmes but the ruins of their sprawling town and their name on beer bottles.

On a typically crystal-clear highland morning we drove north from Cafayate and, heading up the Calchaquí Valley, were soon in what appeared to be Apache territory. This was a landscape of cactus-studded desert and soaring rock pinnacles that looked like the perfect ambush location in an old cowboy movie. The scale was immense, with vast valleys stretching out towards stepped peaks, fading like watercolours as they receded into the distance. 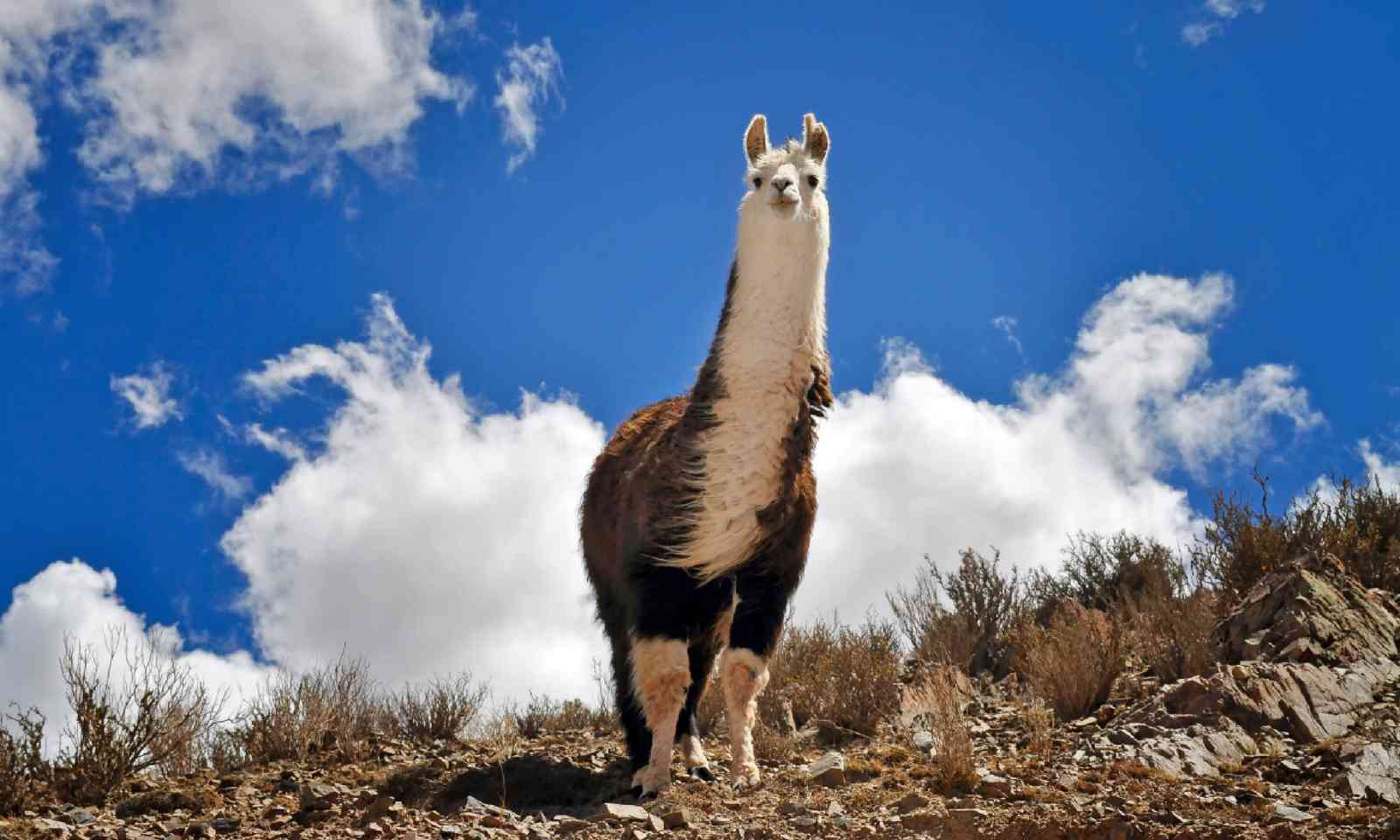 A sign at the edge of the little village of Angastaco warned us to kill our speed: ‘We don’t have an excess of children’ it said. There was an underlying message behind the dark joke; the highland villages are slowly being depopulated as the new generation is lured by the attractions of city life. We stopped to drink a cup of maté (the ubiquitous tea, Argentina’s national drink) at the village store before driving (carefully) away.

Eventually even the gravel dirt track gave way to a narrow canyon. We crept cautiously along rocky streambeds and at times had to power through chasms filled with soft, dragging sand. Sometimes we crawled, inch by cautious inch, along ledges, the vehicles tilting at seemingly impossible angles. 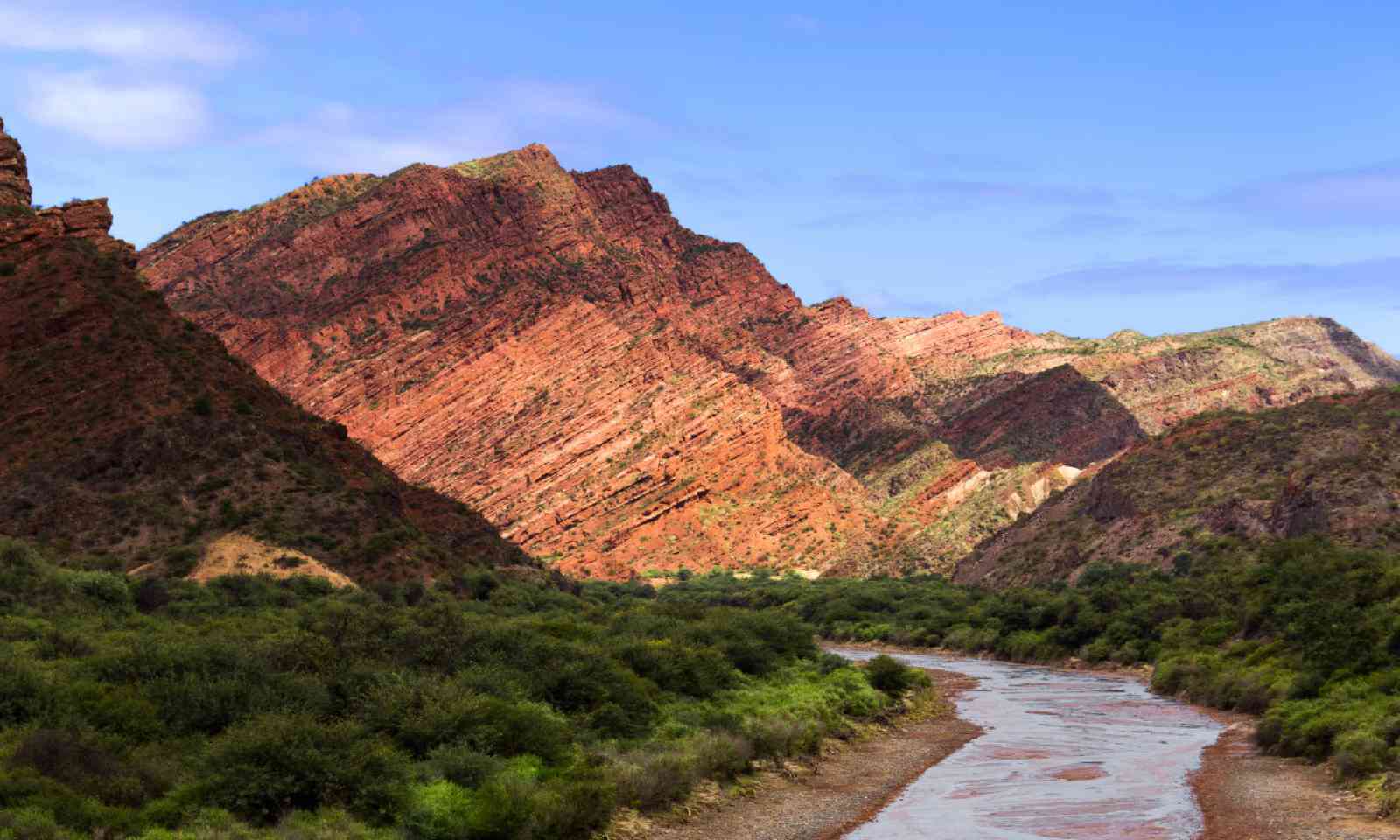 In the late afternoon we pitched our tents beside a sandy riverbed in the shadow of Incahuasi (‘Home of the Inca’). By the time that great rocky peak was bleeding red with the setting sun, two huge racks of beef were sizzling over a smouldering fire. Argentina is famous for its steaks and its people eat more beef per capita than any other nationality. In this harsh country cattle must be grazed over wide areas to find sustenance. The gaucho tradition lives on here with a vengeance.


Galloping with a gaucho

As I was sitting by the campfire (already feeling the chill of a mountain night that would eventually drop to -5°C) a horseman rode into camp. Ernesto Antonio González was akin to local royalty – he was the ‘horse whisperer of Colomé Valley’. 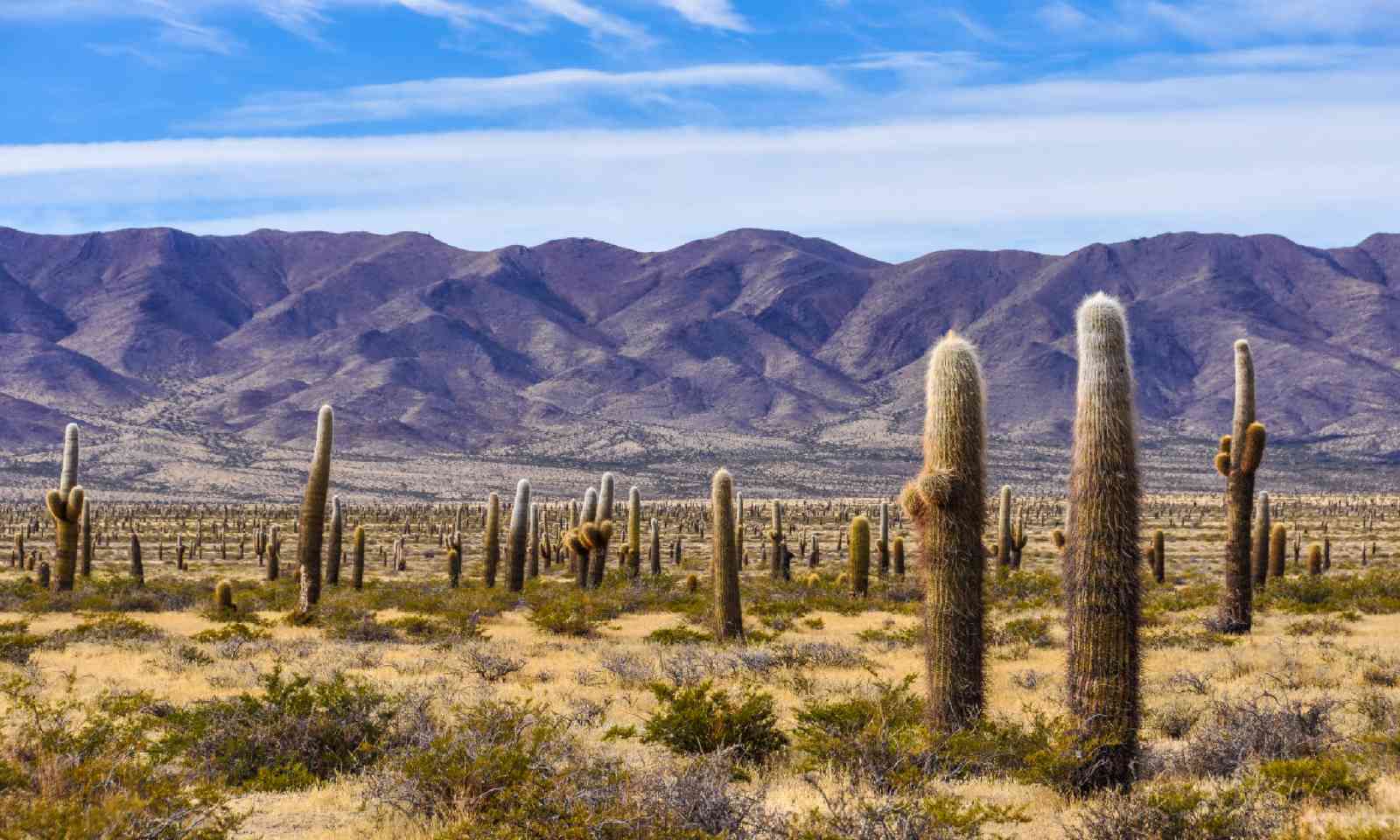 Ernesto rode his first horse before he could even walk and has since helped his father break most of the 180 horses that his family now owns. He has travelled all over the region on cattle drives, several times even making the long journey by horseback into Chile. One of his favourite animals was the feisty bay that he had brought with him today.

“He’s part Criollo and part Peruvian,” Ernesto told me. “Tiene mucha sangre pero mucha doma tambien” – he has plenty of ‘blood’ (spirit), but lots of control too.” To gain control at the cost of the horse’s spirit is worthless,” he said. At Ernesto’s invitation I mounted for a short gallop and was willing to concede that Golondrino (‘The Swallow’) had considerably more spirit than I had control.

To a gaucho, a good horse could be the difference between life and death. The tough Criollos (hardened descendants of the horses brought by the conquistadors) were capable of long journeys on scant grazing, and at night their alertness was an early warning of attacks by highland tribes or mountain lion.


From snow to the sun of justice

It was still dawn, clear and crisp, when we broke camp and began the serious drive up the Calchaquí Valley. By mid-morning we were in the little town of Cachi, where we drank more maté and bought supplies of coca leaves. Although not officially legal, the use of natural coca is tolerated in the Argentine mountains as a remedy for altitude sickness. 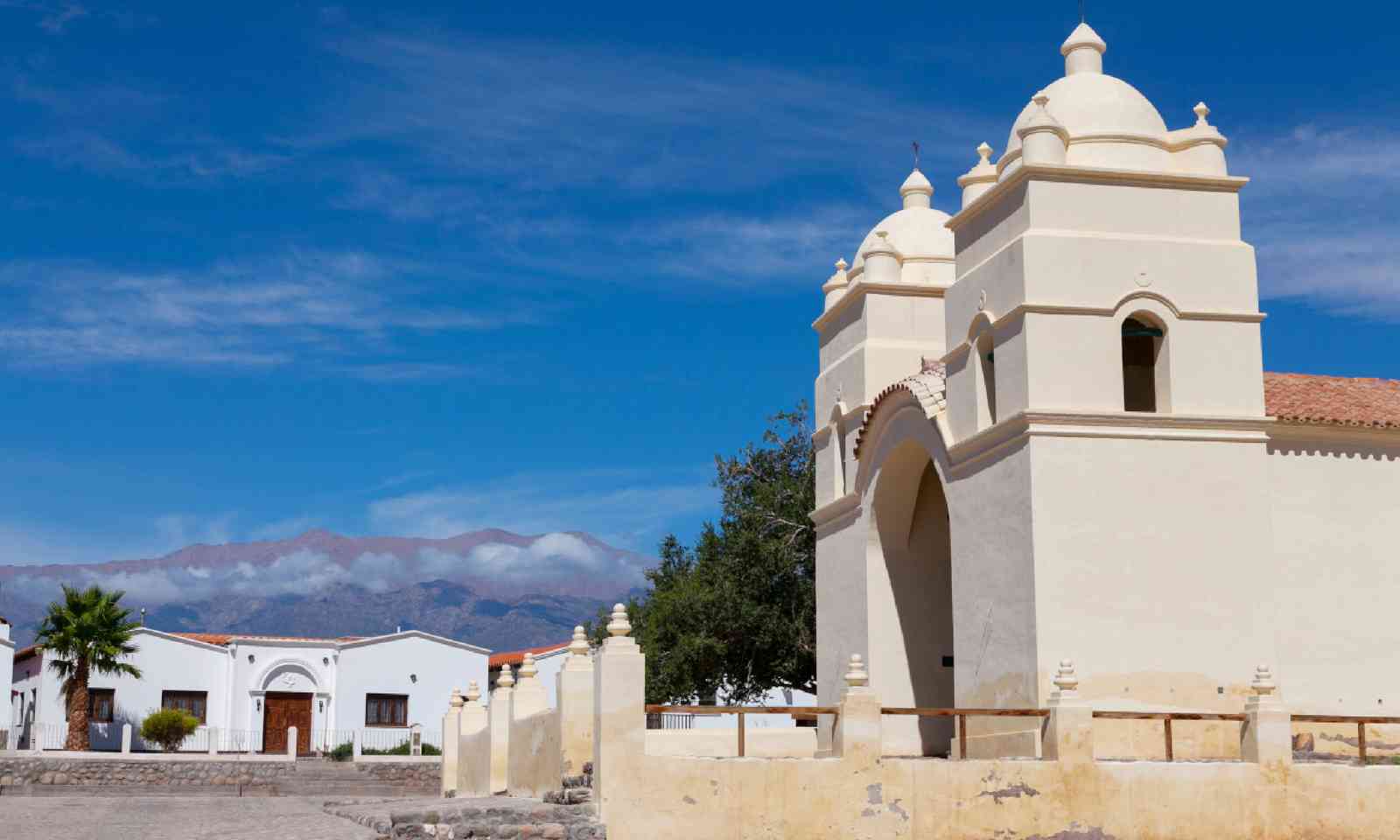 In 1941 the nearby village of La Poma was all but destroyed by an earthquake. Today it’s a ghost town. The adobe walls are crumbling to dust and, in the belfry, one of the iron bells shows a big crack down its side. Only a handful of people had the courage (or the desperation) to remain here.

In the wilderness beyond the village we passed another horseman. The sun was now blazing down with a heat known in these parts as ‘the sun of justice’, so we stopped to see if he needed water. Fourteen-year-old Eloy was going to visit his grandfather who was herding goats in the hills. We chatted for a few minutes; a huge wad of coca bulged in his cheek.

I had my own cheek stuffed with leaves long before we reached the frozen source of the Calchaquí River. We had been passing patches of snow and, at this height, even the powerful midday sun was not enough to undo the work of night-time temperatures that had frozen even the waterfalls.

The peak beside Abre del Acay pass is a bleak, wind-blasted moonscape of jumbled rock that rises to exactly 5,011m above sea level (according to our vehicle’s onboard computer). At this point we were almost certainly the highest drivers on either American continent.

Our Land Rovers were of South American specification, designed to run at higher altitudes than would ever be demanded in Europe. Both drivers and vehicles were gasping as we crawled over the last mile of jumbled rock.

At a hostel in San Antonio de los Cobres we spent a rough night. At this altitude breathing is a problem; often I was woken by the panicky feeling that someone was sitting on my chest. The staff of the hostel offered té de la puna, highland tea made of a collection of medicinal plants, to anyone who seemed to be in discomfort.

Argentina got its name from the Latin word for ‘silver’, after a mountain of the precious metal that was reputed to exist here. At San Antonio de los Cobres only copper was found, in a great enough quantity to be worth building the sky-high rail route that became known as the Tren a las Nubes (‘Train to the Clouds’). 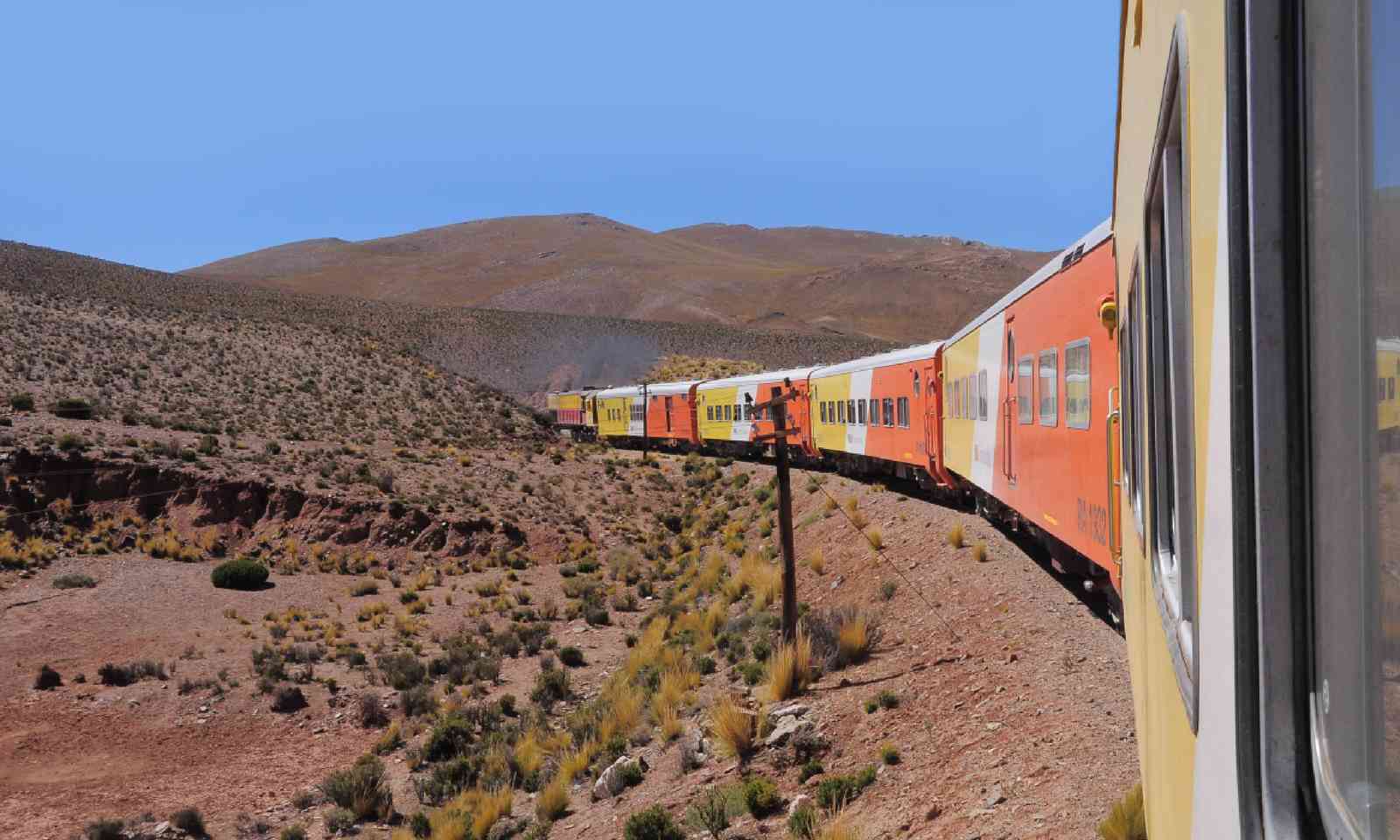 A weather-worn sign above the ticket office told us that Socompa (where the line enters Chile) lies 353km to the west and La Quiaca (the Bolivian border) is 593km to the north. The fact that Buenos Aires lies 1,818km to the south was further proof – if any should be needed – of the scale of the world’s eighth-biggest country.

The railway line still twists through the hills, a ribbon of tunnels and crumbling trestle bridges. Trains are not running at the moment and there is precious little work in the mines anymore; the foreign owners moved their operations to more lucrative areas and jobs became scarce.

There is talk of a new opencast mine being opened in the area (new technology makes it possible to exploit sites that were considered depleted years ago) but it seems there is limited optimism that things will improve dramatically for the mining families remaining here.

We followed the winding route of the old railway line down the long valley towards Salta, our final destination. A condor floated on the thermals high above the tangled trestles of La Polvorilla viaduct. Then we passed a herd of wild guanaco, fleet-footed cousins of the domesticated llama. 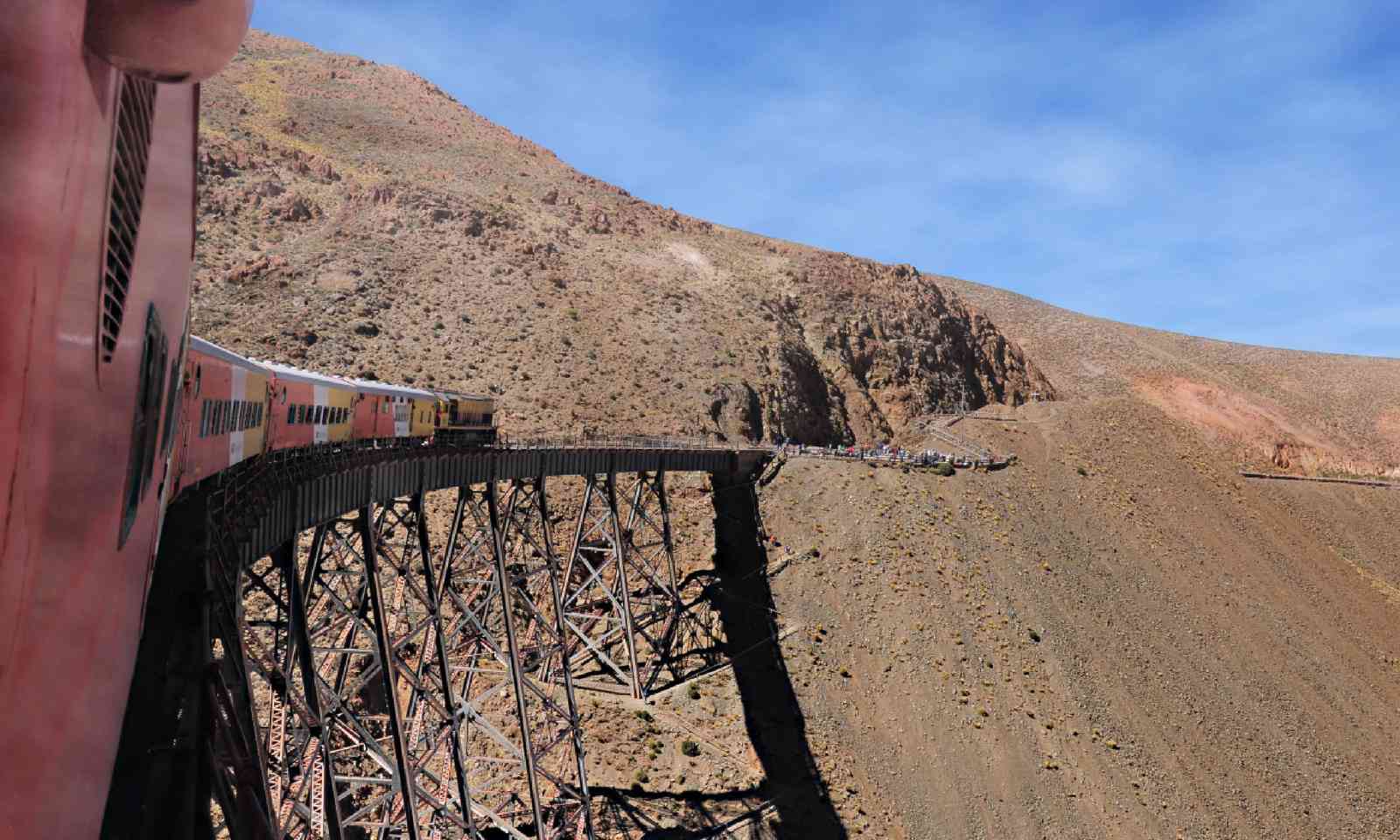 I thought back to the previous day. On the summit of Acay I had seen a cat-like animal dash across the scree and into cover before I could reach for my camera. Although I had caught only a brief glimpse of the animal, it continued to haunt me; I could only assume that it was a puma, too young and inexperienced to know that it was safest to lie low and count on camouflage.

I remembered the stories of farmers we had met on the ridge just below Abre del Acay. Twenty-four-year-old Fabia and her mother have a ramshackle little homestead on the mountainside. Living at about 4,500m, the two women must surely be candidates for the title of highest women in the Americas. Fabia’s father died and she was the only one of several children to survive into adulthood.

“It is very cold at night,” Fabia told me. “Fuel for the fire is hard to find. Often it is mid-morning before the water melts.”

Her face was cracked by perpetual exposure to the icy wind and her cheek was stuffed with coca leaves. But it is not only the cold and altitude that make life here a challenge; the women must keep a constant watch on their llama herd – barely a week goes by without seeing a puma prowling. As we talked outside the hut in which the women slept, huddled for warmth, a motley collection of dogs growled and yapped around my feet.

“We keep the dogs because there are so many lions here,” explained Fabia’s mother. “Sometimes they will take even a full-grown llama.”

Fabia and her mother subsidise their income by selling hand-knitted llama-wool hats or socks to occasional wayfarers who are taken unawares by the bitterness of the climate. Before I left I bought a matching ensemble.

Life is tough in these mountains but it seems that wherever you go in the Argentine highlands you are sure to meet happy, smiling faces. The cheerful welcomes of the mountain people are part of a long tradition of rural hospitality and, after even a very short visit to a highland homestead, you invariably leave with the feeling that you have made friends in high places.


The author travelled with Land Rover