Don’t fancy facing the cold? In these new glass igloos in Finland, you can watch the northern lights from your bed. Just don’t fall asleep…

You can keep your scientific explanations for the northern lights; we’re sticking with Finnish folklore, which says it’s the leap of an Arctic fox that creates the ethereal glow. With the swish of its tail, the fox sends sparks and snowflakes flying, which dance back down to earth in jewel-coloured swirls.

But, for some of us, the spectacle doesn’t quite live up to the legend. Icy feet and frozen fingers can dampen the spirits of even the most ardent aurora hunter – especially if the lights themselves are being shy. No, the secret of a great lights spotting trip is to hole up in the most comfortable nook, and we think we’ve found it in some cosy beds in Ranua, Finnish Lapland.

The clear-roofed bedrooms of Arctic Fox Igloos glitter like glass baubles on the snowy shores of Lake Ranuanjarvi – one of Finland’s top lights locations thanks to its lack of light pollution. You’ll have a front-row view of the skies from under your covers, with a coffee machine (you don’t want to fall asleep, do you?) and heated glass panels to melt away any snowfall. When the lights appear, their reflections shift on the lake’s glassy waters, making them a dream for photographers. 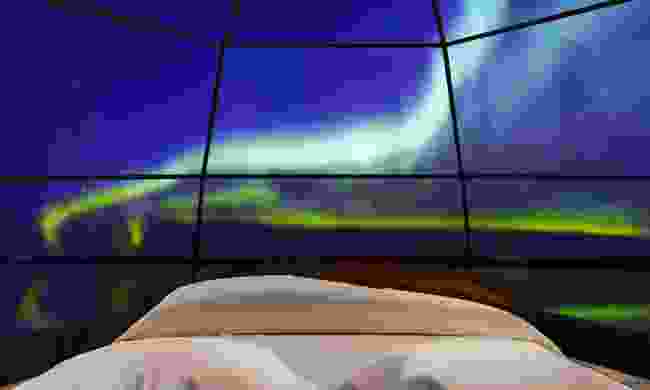 Spy the northern lights from under the covers (Discover the World)

Each igloo is secluded, with a living area, bathroom and sauna tucked away in the (reassuringly opaque) wooden structure out back. And if the lights don’t show? There are plenty of Arctic activities nearby, such as husky sledding, reindeer safaris and snowshoeing, as well as Ranua Wildlife Park, where Arctic animals roam through the tundra.

Indeed, the park is one of the few places where Finnish Arctic foxes can still be found. And if a flick of their tails doesn’t boost your chances of seeing the lights, surely nothing will.

Finnair flies from London Heathrow and Edinburgh to Rovaniemi (via Helsinki). From Rovaniemi, it is a one-hour drive to Arctic Fox Igloos. Transfers can be arranged on request.