Often mistaken by visitors for a Moorish palace, Hotel Alfonso XIII is a Seville landmark

Seville’s storied Hotel Alfonso XIII was commissioned by – and named after – the King of Spain for the Ibero-American Exhibition of 1929, serving as the residence for visiting international dignitaries but with a bigger aim: to become the grandest hotel in Europe.

The hotel quickly became one of Seville’s best-loved buildings and an integral part of the city’s social life; the ‘Alfonso’ is still owned by the City of Seville today. Its elaborate decoration in the Neo-Mudéjar style, fashionable in the early years of the 20th century, continues to dazzle guests and visitors alike, transferring them to a romanticised bygone era of Moorish elegance.

Hotel Alfonso XIII has 148 rooms corresponding to three different looks, each design reflecting a facet of Seville’s own idiosyncratic personality: Andalusian style, with leather headboards and chairs embellished with metal rivets; Moorish style, with Mudéjar details and arabesque plasterwork; and Castilian style, with elegant cornices, wooden coffering and Murano glass lamps. We recommend you ask for room 303, a regular room that nonetheless comes with a huge patio boasting outstanding views over the skyline of historic Seville, including the imposing 16th century Catedral de Sevilla. 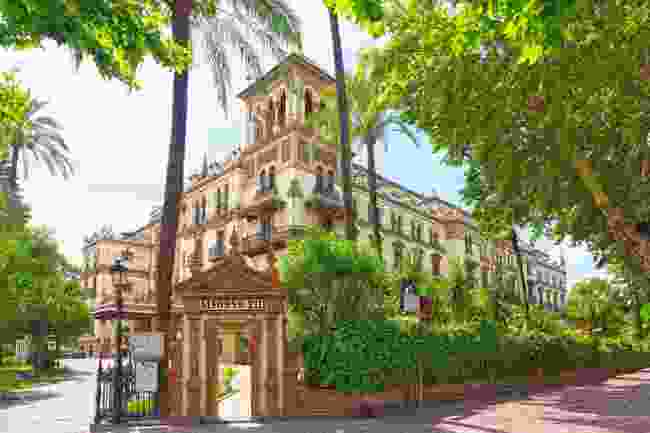 At the Hotel’s San Fernando restaurant, distinctively Andalusian with its ornamental tilework and colourful upholstery, regional flavours are the order of the day. Arrive after 9pm, as you do in Seville, and try a plate of Iberico ham from Jabugo, or Almadraba tuna carpaccio, before making your way to the Bar Americano. Tucked into the covered galleries around the central patio, its Art Deco-influenced design is twinned with a celebrated cocktail menu.

Visitors can find some respite from the harsh Sevillian summer sun in the hotel’s exotic garden. While enjoying the shaded calm, you can spy species of the plants that were originally brought in for Expo 1929, among them a banana palm and several avocado trees.

The hotel’s unmistakable sense-of-place is magnified by its central position. You are just steps away from the elaborate gardens of Seville's medieval Real Alcázar, the always-buzzing historic quarter of Santa Cruz – the perfect place to take in a flamenco show – and that looming cathedral: one of the world’s largest, boasting its own aromatic orangery. Of course, it’s easy to inhale in the sensory pleasures of Seville when you’re already staying in the city’s most iconic address.

5 delicious dishes your kids will love in Seville