A short hop from Tokyo, Karuizawa intrigues with its explosive landscape, scenic shrines and celebrity visitors: Beatles, emperors and Asiatic black bears. We go in search of them…

"English?” asked the attendant checking entrance tickets into Onioshidashi Park. “You like John Lennon?” With that he pulled out a much-handled laminated photo, taken in the 1970s. It was a standard family holiday photo but the people looked familiar. With a jolt I realised it was of Lennon, Yoko Ono, and a very young Sean Lennon. “Taken where you stand now!” he gesticulated.

My guide, Soichi, explained that John and Yoko had spent their summers in the nearby resort town of Karuizawa for what was to be the final four years of Lennon’s life. Like me, they had come to Onioshidashi to marvel at the extraordinary landscape formed from an eruption of the Asama volcano in 1783. Onioshidashi translates as “demons pushing out rocks” and, with the eruption killing over 1,000 people and smothering the area in lava, you could see how the park got its name.

Mount Asama is still active, the last major eruption being in 2009. Looking over at it from the park on an early autumn day, it dawned on me that what I initially thought was a cloud hanging over the volcano was actually a plume of vapour. 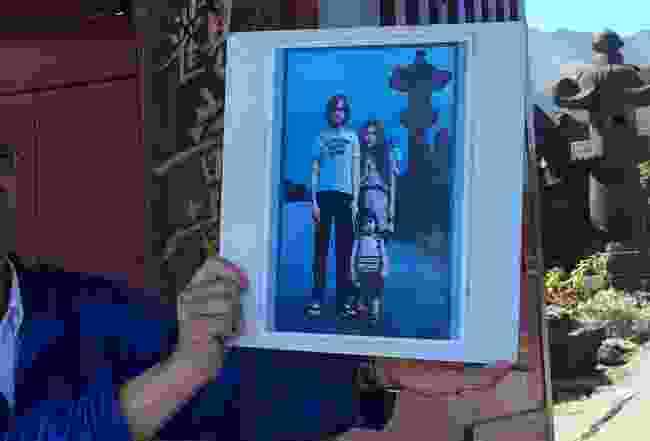 The park was startlingly beautiful in an otherworldly way. The landscape of black solidified lava and rock was dotted with vivid green plants growing where they could. Stop and look more closely and you’d see alpine flowers, darting lizards and a golden moss. Red railings led to the Buddhist Shrine at the heart of the park, dedicated to Kannon, the Goddess of Mercy, and to which all the visitors were drawn.

“We Japanese are very confusing!” Soichi smiled, as he explained that most people follow both Shinto and Buddhism. At the shrine, a steady stream of visitors gave an offering of coins, prayed and then rang a bell and bowed. And not just human visitors. One couple arrived slightly out of breath and wheeling a pushchair with a small dog sitting proudly in it.

I asked whether the dog was unwell. “No, but he gets tired!” they explained in a very matter of fact way. With that they lit a votive bundle of incense and waved it over the dog. Another pair of people arrived with a terrier carried against the chest in a baby papoose. Again they bought a small bundle of incense sticks, which they lit and passed over the dog.

Driving back to Karuizawa down quiet leafy lanes, Soichi asked whether we wanted to see the hotel where John Lennon would stay. We drew up in front of what looked like an Alpine lodge, while inside the Mampei Hotel, its lobby with wood panelled walls and Art Deco stained glass was a step back in time. Tracing its origins as an inn back to 1764, the Mampei was transformed in 1894 into Karuizawa’s first Western-style hotel. The Lennons used to stay in room 128, and the terrace cafe still serves what they call ‘royal milk tea’ prepared the way John would ask for it, along with his favourite apple pie. 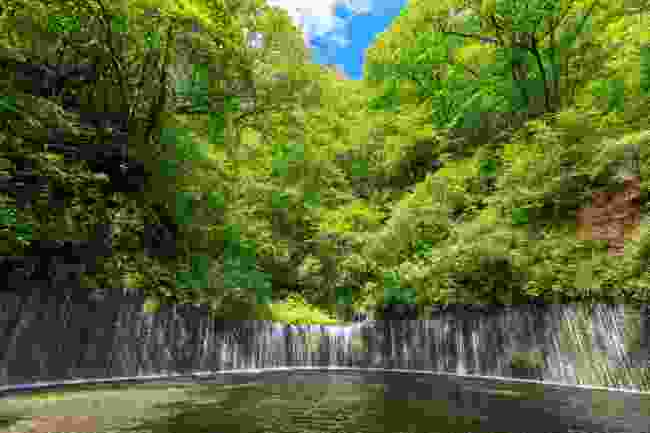 Karuizawa began life as one of the 69 post stations on the Nakasendo, one of the two routes connecting Tokyo and Kyoto in the Edo-era. Then, in 1886 it was ‘discovered’ by Canadian missionary Alexander Croft Shaw who began coming here each summer to avoid Tokyo’s heat. Others followed his example, and it became a popular retreat, attracting many well known people over the years, including the Japanese royal family (the now-retired Emperor and Empress wooed on the tennis court), as well as Yoko Ono’s family.

Today Karuizawa is easily accessible from Tokyo, taking only an hour by bullet train, making it an attractive proposition for commuters, retirees and those wanting a short break. Set at an altitude of around 1,000m, it is pleasantly cool in summer. It is high enough to get snow in winter and then transforms into a ski and winter sports resort, with artificial snow machines helping out if necessary.

Not surprisingly, the population is growing. As more houses are built, there are tight planning regulations to preserve as much of the local woodlands as possible. So, if someone builds on a plot of land, 80% of it has to be kept natural. A good indicator of this continued biodiversity are the Asiatic black bears that prowl the forest here, however there have been a growing number of encounters between bears and people.

To find out more about the bears I took a nature walk at the Picchio Wildlife Research Centre. The appropriately named ranger Mr Mori (his name means forest) led a group of us into the surrounding woodland, showing us signs of wild boars having rooted the earth, and where bears had scratched tree trunks.

Mr Mori explained that the bears are omnivores, eating plants, berries, chestnuts, acorns and honey. However, with climate change leading to milder weather, hungry bears, who otherwise would have been hibernating, are tempted to raid crops and enter villages. A scheme has been initiated to train dogs to safely chase the bears away.

I was eager to explore more of the forest and to walk a section of the ancient Nakasendo Trail. Volunteer guide Francisco retired to Karuizawa ten years ago from Tokyo after a career in construction; “It was my dream to live here.” He was certainly looking well on his new lifestyle as, wearing a jaunty red hat and neat backpack, he set a brisk pace as we set off to walk a mostly uphill 4km to the Usui Pass Observation Platform.

Reaching the viewpoint, without really knowing what to expect, I gasped in awe at the sight of the Yatsugatake mountains, Akaishi mountains and Mount Asama stretching away above a blue haze into the horizon. Just in time, the sun appeared from behind a cloud and glowed deep gold as it sank behind the mountains.

I’d been told that the Lennons were regular visitors to the lookout and also the nearby Kumano Kotai Shinto shrine. We strolled up the street to the shrine’s entrance, uniquely sat on the border of two prefectures, Nagano and Gunma. Obeying instructions to not walk through the middle of its torii gate but to the left or right, I made my way up steep steps to be faced by several very old wooden buildings, one straddling the border, while each side had its own buildings and apparently its own high priest.

The shrine is very busy in the daytime, but as the light faded we were the only people there. Charms were hanging everywhere, including paper cut into ‘lightning’ shapes, left by farmers wanting rain. Once upon a time, farmers may have left a horse as an offering. Today, small wooden tablets, many with horse motifs on, had wishes written upon them. A large and ancient tree, known as Shina no Ki, was covered with yet more charms and messages. Known locally as a ‘power spot’, it is over 800 years old and was struck by lightning 500 years ago, leaving it with a unique heart shaped hole in its trunk. Visitors circle it asking for good luck and blessings, for success in love and with fertility.

Despite the lack of other people, the atmosphere was heavy with desires and dreams. It felt palpable. As we left in the dark and exited the torii gate I turned to face the shrine. For a moment I could imagine John, Yoko and Sean beside me and joined them in slowly bowing to show our respect. 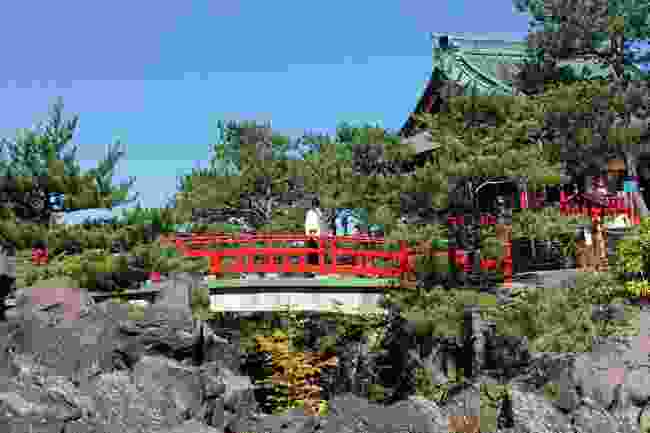 Getting There: There are two Hokuriku Shinkansen trains, Hakutaka (10 a day) and Asama (24 a day), which depart from both Tokyo and Ueno stations and stop at Karuizawa. They are both covered by the Japan Rail Pass. The journey time varies but is on average 60 minutes. For those without a Japan Rail Pass, tickets can be bought on the day, but advance reservation is recommended.

Bus services are also available via the Highway Bus using the Chikuma Lines. The bus makes multiple stops, departing from the Shinjuku Expressway Bus Terminal (only once per day), and most commonly departing from Ikebukuro Station East Exit (six times per day). The journey takes approximately three hours. Tickets must be reserved in advance and cannot be purchased immediately prior to boarding.

Getting Around: If not cycling there is a seasonally run ‘Red Bus’, with just 15 seats, which goes to Manpei Hotel, through Kyu-Karuizawa Ginza Street, and to Kumanokotai shrine and the Usui Pass observation platform. Buses run hourly from the station to Onioshidashi Park.

When to Go: Karuizawa is an all-year destination, with pleasant summers and cold winters. Golden Week (end of April/early May) is best avoided as it’s crowded. Perhaps the best time to go is autumn (end October/November) for its fall colours.

Top things to do in Karuizawa

7 photos of life in Japan