Daniel Nettheim is an exciting new Australian feature film director who cut his teeth on TV drama, most notably the popular local series, Rush, All Saints and The Secret Life of Us. His latest movie, The Hunter, stars Willem Defoe and Sam Neill, and depicts one man's quest to track the last Tasmanian tiger.

The film has been praised for its stunning cinematography and Willem Defoe's extraordinary performance as Martin David, the mercenary sent to find the last tiger. Daniel talks to Peter Moore about Tasmania, Willem Defoe and whether he thinks the tiger still exists.

First of all, congratulations on the film. It has opened to great acclaim in the UK. Jason Solomons in The Observer described it as 'one year's most memorable films.'

Were you expecting it to be so well-received?

But yeah, we've really had a great reaction. It has really struck a chord with critics and audiences.

Has that been worldwide?

We've sold to over 20 different countries. Having Willem Defoe playing a character coming to Australia as an outsider gave it international flavour, so it wasn't necessarily seen as an Australian film outside of Australia.

In Australia there was a bit of criticism. They were saying, 'It's a beautiful film, but it's a shame they couldn't have had an Australian actor in the lead.' But the reality is that the film wouldn't have been made unless we would have been able to get Hugh Jackman or Russell Crowe.

Besides, Willem was the right guy for the role in so many ways.

How was it working with Willem Defoe? When you watch the film, you can't imagine anyone else playing the part of Martin David.

It was great just watching him take ownership of that character and take ownership of the skills, like the creating of the traps and snares and the skinning of the wallaby and all the other bushcraft. He took a lot of pride in the detail of that work. It was always important to him for it to be as convincing as possible. He had an absolute dedication to getting it right.

As well as that he was just a really enjoyable guy to hang out with in Tasmania for seven weeks.

Of course, Sam Neill and Frances O'Connor aren't too shabby either. You were able to attract quite a stellar cast to the project.

We were really blessed. I was really pleased that both those actors wanted to come on board and go on the journey. It always makes the director's job easy when you've got great actors.

What was it that drew you to the project initially?

I read the novel, by Julia Leigh, which was a beautiful work of literature. Although by no means was it an obvious film adaptation. It was very internal but the key elements were all there. A very compelling central character journey, amazing landscapes. Basically a great character story that takes place against an epic backdrop. 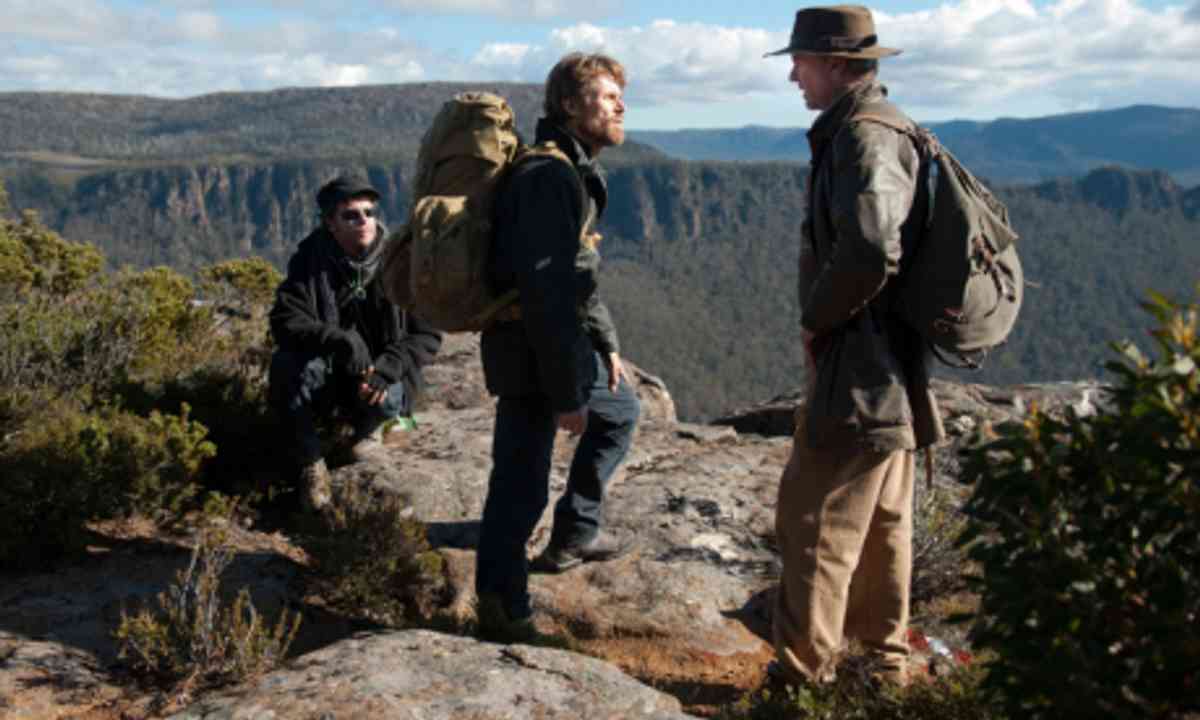 Speaking of epic backdrops, the Tasmanian wilderness is very much one of the characters almost, that big epic broodingness.

It's also a character in that in a lot of scenes Willem isn't playing against other actors. He is acting opposite nature, just as you would if you were playing a scene with a human actor. You're responding to what's in front of you, you're engaging with it. For him, the physical realities of that shoot was another actor.

Where was the film shot? What parts of Tasmania?

We moved around a bit. First we were in Hobart where we shot the airport and the hotel scenes, and some of the more urban locations. Then we were in a place about an hour out of Hobart, where we filmed the greenie protest camp, some service station stuff and a bit of the landscape stuff. The we spent five weeks in a town called Deloraine, which was our main base really and we had a farmhouse near there and we had a Central Plateau reservation area and some the really amazing alpine landscapes we used. And then for the last week we were in a place called Maydena, near Lake St Clare that gave us a lot of button grass plains, once again some different kinds of landscapes.

What were the challenges of filming in Tasmania?

One of the big challenges is how changeable the weather is. It's one of things Tasmania is famous for, being able to cycle through four seasons in an hour. So getting consistent lighting when we were shooting a scene was always an uphill battle. It was cold, it was windy. It's a small land mass that doesn't really have its own weather patterns. It just gets buffeted by whatever that gets thrown from it across Bass Strait. We had snow in November, which is nearly summer. Fortunately for us, we got snow on the day we really wanted snow, so it worked in our favour. But we decided pretty early on that we just had to go with the weather, we had to make it our friend, to adapt our shoots to whatever was happening. Just like Willem's character really. You just never going to beat that environment.

What were the benefits of shooting in Tasmania? Our editor-in-chief, Lyn Hughes, met Willem Defoe at the media screening of The Hunter in London and he raved about the food in Tasmania.

Both Willem and Sam Neill are bon vivants. And they're old friends. So get the two together and it's not long before someone has located some amazing organic-produce restaurant nearby in the countryside serving amazing local wine. People live and eat well down there. It's a small island, so even when you're in really remote places you're never far away from creature comforts.

The other benefit was that it offered these amazing natural environments. People were very friendly.

Finally, the film revolves around Willem Defoe's character searching for one of the last Tasmanian tigers. In the course of researching and filming, were you led to believe there are any left. What's your take on the existence of Tasmanian tigers now?

I started off pretty skeptical about the idea, but over the course of developing and making the film and interviewing a lot of the locals I did open my mind to the possibility that this thing could still be out there. On the one hand science tells us it is not possible.

On the other hand, we recorded thousands of hours of interviews with locals, wherever we went, asking them the question 'Does the Tasmanian tiger still exist?' and the first hand accounts we got from these interviews were so compelling, from very normal people who had no reason to lie about such things.

So whether it's still alive, it's very hard to say. But it lasted decades beyond when it was officially meant to be extinct. And when you look at the map of Tasmania, so much of it is uncharted, dense wilderness, impenetrable, no roads. So if a creature wanted to disappear, there are plenty of places for it to hide.

The Hunter is in UK cinemas now.  It is available to buy as a DVD or Blu-ray in Australia and the US.

Director of the new star-studded film, set in Jaipur, chats to Wanderlust about travel, how to dodge Delhi-belly and the best way to drive on Indian roads More

The Secrets of Wild India

Russ Malkin has directed and produced some of the biggest adventure travel programmes on TV. He tells how you can too More