Buon appetito! How to eat (and cycle) your way around Emilia-Romagna

Emilia-Romagna has gelato, Parmigiano-Reggiano, Parma ham and plenty more to attract foodies – and exploring by bike is the perfect way to stop and sample it all

“These are the twins,” announced Paolo Zoboli proudly. It had been a quick and pain-free birth, surprisingly so considering each newborn weighed a mighty 50 kilogrammes. All it had taken was one deft slice with a blade, moments before, for the giant ball of cheese being swaddled inside a copper vat to be cut into two identical halves, or ‘twins’, as Zoboli called them. “We take this one big piece of cheese, cut it into two pieces,” he said. “It was born from the same pot. Each ‘twin’ equates to around 600 litres of milk, taken from 25 different cows.”

Each new arrival would later be salted and stored for 24-36 months before being sold as top-quality Parmigiano-Reggiano. They were joining a big family. In the storeroom at Zoboli’s factory alone, behind his shop in Canali di Reggio Emilia, there were around 4,000 wheels of cheese. 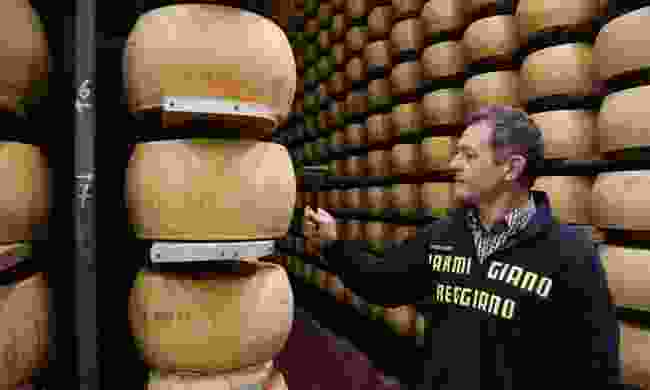 Food is a big deal in Emilia-Romagna. Naples may have given the world the pizza, but this region, in northern Italy, can lay claim not only to being the home of Parmigiano-Reggiano but to homemade pasta, gelato, balsamic vinegar, Parma ham and more. “Very, very seriously” Paolo laughed, when I asked him how seriously people here take their food. “When you have dinner with people, its impossible that they don’t talk about the food. We love to talk about food. There are more important things in life, of course, but for us it’s very important. It’s part of our identity.”

Zoboli’s cheese factory and connected Agriturismo La Razza hotel were one of the stops on a cycling tour through Emilia-Romagna, from Bologna to Parma. “This is the land that’s famous for food production,” Giovanni Simoni, Cycle Europe’s guide, had explained, as he talked us through the self-guided route on the rooftop of Hotel Touring in Bologna. “The cycling is quite simple, only around 60 kilometres per day, so there’s plenty of time to have a drink or find something to eat along the way.”

We warmed our legs up with a ride into the steep hills overlooking Bologna, and in the afternoon explored the city on foot, from the Basilica of San Petronio on the central piazza to the leaning Torre Garisenda, which, at four degrees, is slanted even more precariously than Pisa. 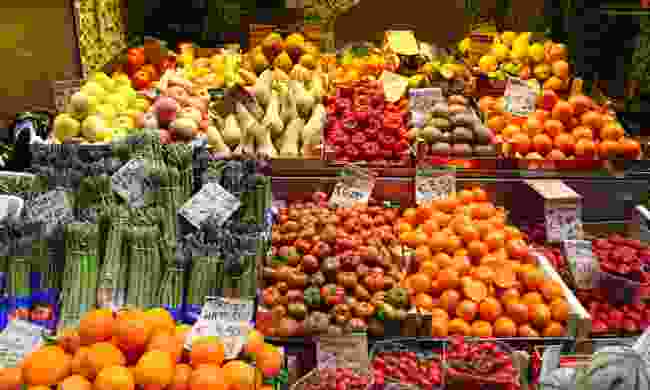 In the evening, we turned off Piazza Maggiore onto the narrow Via Pescherie Vecchie, the cafes busy with locals taking their time over wine, cold cuts and cheese. We knocked on a door and got buzzed up to the top floor for an introduction to Italian home-cooking. Diva Gelosi is one of the home chefs on the books of Le Cesarine, who arrange meal experiences at locals’ homes in Bologna and other parts of Italy. Ella Fitzgerald was playing in her cosy living room, as Diva served glasses of sparkling wine and kicked us off with appetisers of fried polenta and Parmesan in balsamic vinegar.

We ate at a little table, surrounded by fairy lights and book shelves, the feast starting with farfalle pasta with veggies. “Bologna is the food capital of Italy,” Diva told us. “We love cooking at home. It’s normal for us to make homemade pasta. Our mothers show us, our grandmothers showed them. I learned to make pasta when I was 12.” The practice showed, as this was one of the most memorable meals I’ve had in Italy, the pasta followed by a hearty aubergine and mozzarella bake, then tiramisu with strawberries. “All homemade,” Diva said with pride, before pouring glasses of sweet, green homemade limoncello to send us off into the night.

We cycled out of Bologna next morning, leaving behind the traffic and the suburbs, pedalling on paths along canals and out into the countryside. By mid-morning, we arrived at a drab, grey industrial estate. The exterior of Carpigiani Gelato Museum looked equally uninviting but inside is a colourful short history of gelato, from the nobles of Mesopotamia who made desserts with ice and snow collected by their slaves to the earliest gelato machines. “Gelato is, in my opinion, better than ice cream,” ‘unbiased’ tour guide Carlotta Deiana told us. “We contend that Bologna is the home of gelato because of the machines. The automated electric machine used for producing gelato was invented by Bruto Carpigiani in Bologna.” As refuelling cycle stops go, this was right up there; a little tub of Mandorla Affogato (caramel and nuts), chocolate and yoghurt gelato in Carpigiani’s roadside café were smooth, light and creamy. 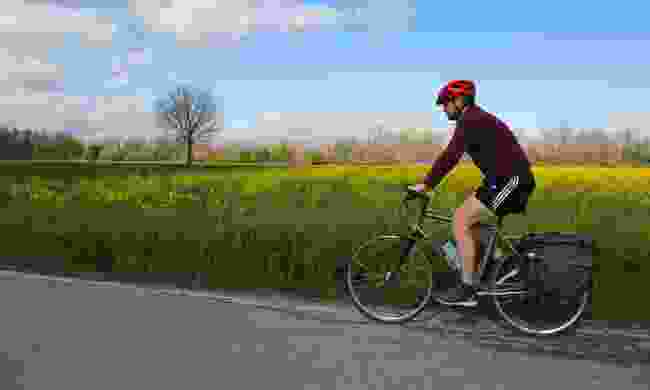 We rode deeper into the countryside, pheasants bolting through lines of white-blossomed trees, hares gambolling through tall grass. The cycling was mostly flat, far easier going than, for example, the testing hills of Tuscany. A kestrel hovered above a recently ploughed field, his search for food far harder than ours in this region.

We spent the night in Modena, the historic city where Luciano Pavarotti was born, and cycled onwards next day through Enzo Ferrari park, named after the car-maker who lived nearby. The countryside opened up, with vast stretches of green fields, roads linking up little villages where there were crumbled remains of barns and houses. What land wasn’t taken up with farming seemed to be covered in vines.

In the village of Scandiano, we stopped at Acetaia Cavalli to see how traditional balsamic vinegar is produced. Upstairs in the fragrant storage room, there were barrels of up to 300 years old, the artisanal process slow and complicated compared to industrial balsamic vinegar production. “Cheaper industrial vinegar takes two months of aging. Here, it can take 20, 25, 100 years…,” Luisa Milanaego explained. “Balsamic vinegar of Reggio-Emilia is a protected denomination, like Champagne.” 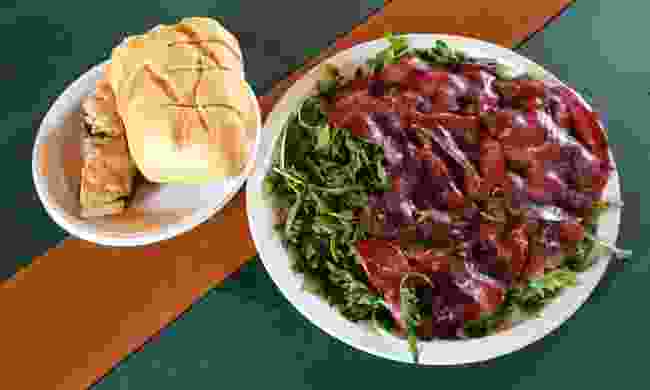 Lunch, cooked by Giovanni Cavalli, made liberal use of their product, with bresaola (thinly sliced beef) for my meat-eating cycling partner, an omelette and spinach with balsamic vinegar for me, with more balsamic vinegar and crusty bread on the table, then a dessert of strawberries in balsamic vinegar. “The word ‘balsamic’ means medicine in Italian”, Milanaego told us. “In the past they used balsamic vinegar for a bad headache or stomach ache.”

The afternoon ride took us into deep, empty countryside, a few gently sloping hills cutting through farmland. We passed a road sign leading off towards “Monte Evereste”, making me think we may have cycled 6,000 miles too far.

After spending a night surrounded by peaceful greenery at Agriturismo La Razza, we had an early appointment with Zoboli at his cheese factory. The process for Parmigiano-Reggiano cheese is much the same as it was in the 1200s, when it was invented by monks, Zoboli informed us, inside the production hall. “Parmigiano-Reggiano is hand-made. There are machines that could do the job, but, for us, this is about the art of cheese-making. Parmigiano-Reggiano is completely natural, and it has to be made here in this region and in this traditional way to be called Parmigiano-Reggiano. 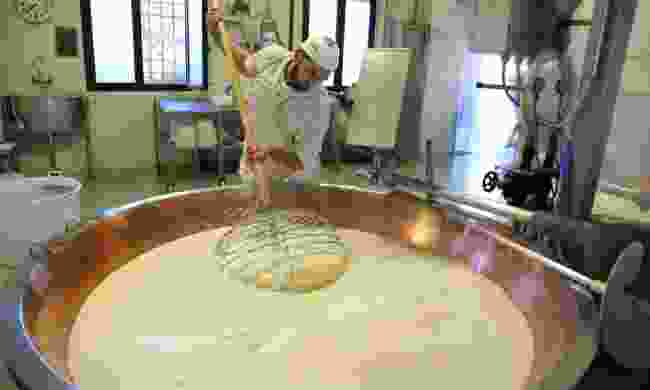 We tried several cheeses, including a 24-month-old Parmigiano-Reggiano and a creamy ricotta, made from the same milk. In the storeroom, Zoboli tapped a wheel with a little hammer, judging the quality by the sound. “This is not a museum,” he said. “This is people working, daily life, but it is still our heritage. It is not only cheese for us. It is a combination of a lot of histories.”

Riding out along the river, we passed a young skateboarder being pulled along by his dog on a lead. Pheasants were a regular sighting, strutting around, heads and necks above the tall grass in fields, or strolling through woodlands. There were plenty of hills, too, across the day’s 65 kilometres, as we rode from town to town, past new builds and crumbly old barns.

We detoured into Reggio Emilio town for the busy Friday markets, and in the afternoon, we passed by the 16th century Castle of Montechiarugolo, the landscape becoming more dramatic, with hills all around us and, in the distance, snowy peaks, the foothills of the Appenine Alpe mountains to the south. We cut through rolling countryside, before picking up the green bike paths that led into the city of Parma. 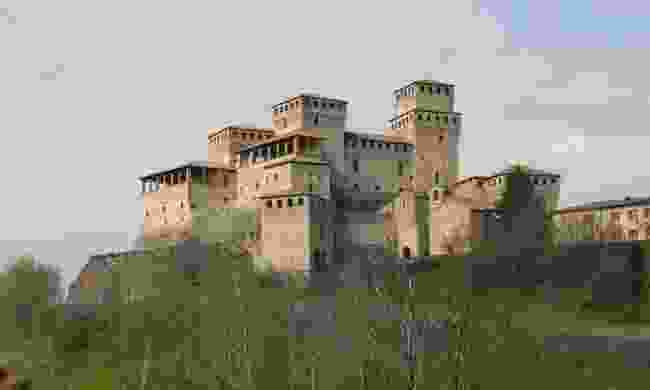 On our final day, we rode along the Parma river and into open farmland, where lapwing pairs flirted above the fields. The ride took us on a loop, out to 14th-century Castello de Torrechiara and back, via quiet country villages.

We took a walk through Parma’s old churches, museums and gelato shops, and, in the evening, found a local restaurant for a final meal. Parma’s famous for its cured ham, which, as a veggie, wasn’t all that exciting. Instead, I went for fried polenta, pumpkin tortellini and Parma-style aubergine bake, my friend trying the ham and a dish of tagliatelle. As is the tradition here, we took it all – from the first bite to the last sip of wine – very, very seriously. 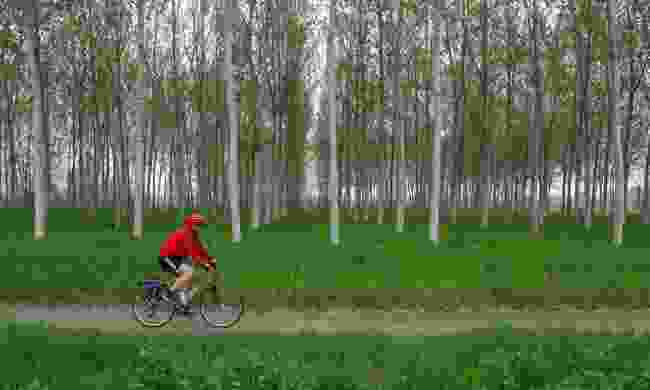 "The ride took us back via quiet country villages" (Graeme Green)

The author travelled with Cycle Europe (001 877 356 2453) whose self-guided A Taste Of Italy tour from Bologna to Parma costs from €1,390 (approx £1,200) per person, including six nights B&B in 3-4 star hotels, three dinners, bicycle hire, GPS with preloaded routes, maps, luggage transfers and culinary experiences along the way, including tastings.

Home-cooked dining experiences in Bologna and other locations across Italy can be booked with Le Cesarine (+39 051 220797).