Sweden’s southern coastal region of Skane is an idyllic escape for cyclists. It’s easy to pedal and filled with natural beauty and Viking history – it used to belong to Denmark, after all. But few visitors dip as low as the coast, an area where locals live the ‘Svensson life’.

Cycling Skane offers a slow-motion vision of the breadbasket of rural Sweden, far from the Arctic glamour of the north. The roads are flat here and the sea breeze reassuringly cool given the lack of shade. Yet among the vast stretches of sandy shore that played on repeat, I found hidden among its rural scenes wonders aplenty.

Over the course of a week, I set out to explore Skane along the 260km-long Sydkustleden cycle trail (look for the pink markers), which runs the coast between Simrishamn in the east to Helsingborg in the west. As the days rolled by, I breezed past golden wheat and sands alike, detouring via medieval villages and the ‘Swedish Riviera’ to spy mysterious standing stones and wildlife, and feel the sea air ripple across my buttocks in a naked spa. Pick-me-ups included a daily fika, afternoon tea elevated to the level of ‘wellness activity’ in a way that only Scandinavia has the wit or peace of mind to do, and long evenings filled with slow meals ripe to reflect on the day. Here are the 10 experiences that make the Sydkustleden unforgettable… 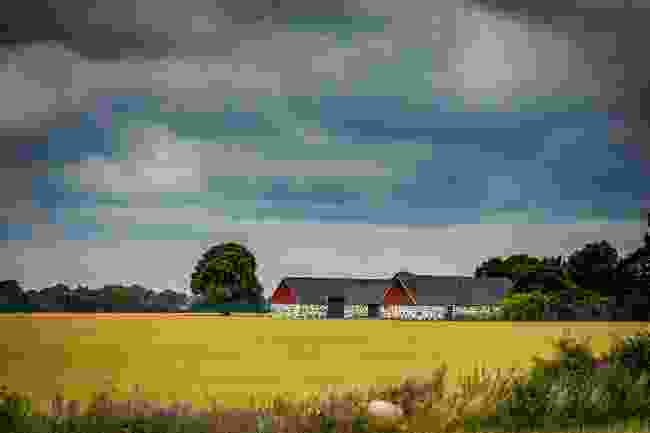 Fields in the south east region of Osterlen (Oliver Bock)

Amid the swaying fields of wheat and rapeseed, make a detour south west of the pretty fishing village of Simrishamn to see Glimmingehus. This sturdy-looking building was as much a fortress as a home, built in 1499 by a rather fearsome Danish ‘knight’, back when Skane was still part of Denmark.

The word ‘pirate’ might be a better summation of its original owner, Jens Holgersen Ulfstand, who earned his coin hijacking merchant ships from Sweden and the Hanseatic League at the behest of the Danish king. Guided tours enter under booby-trapped doors where boiling water would drench unwanted visitors, and its two metre-thick walls scream medieval Bond-villain lair. It’s a good primer for a whistle-stop history tour of an area that was Danish-owned throughout much of the Middle Ages and beyond. 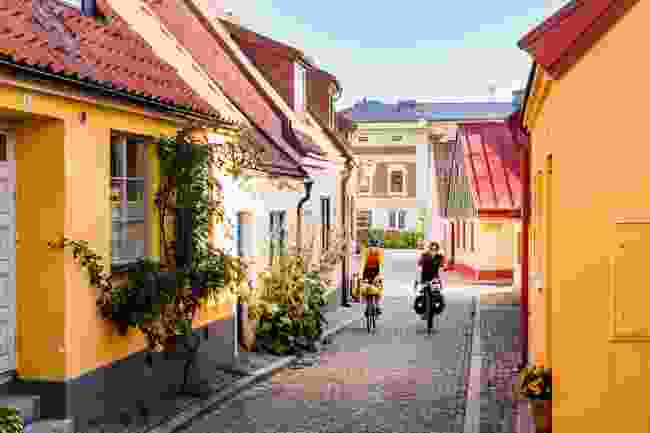 Henning Mankell’s Wallander novels have long since thrust its star detective’s hometown of Ystad into the limelight, and tours of its film studios, where his books were adapted onto the small screen, make it popular with ‘TV tourists’. But its appeal goes beyond the page.

Ystad’s medieval cobbles and 300 half-timbered houses, painted in pleasing pastels and wrapped by roses, are a delight to wander. In the town’s centre, look out for the 13th-century Sankta Maria Kyrka church. From its clock tower, the nightwatchman, or tornvaktare, sounds his horn every 15 minutes from 9.15pm until 1am (3am in summer) to reassure that all is well, a tradition that dates from the 1700s. It’s just that kind of town.

Sweden’s oldest preserved abbey is also worth a visit. It has been transformed into a sprawling museum, telling the story of how, from the Reformation onwards, it was mangled into an asylum, a hospital and even a brewery as attitudes changed along with the times.

Afterwards, settle in for fika at Grandens mat, an incongruously hip restaurant (think poké bowls and hearty stews) whittled into a block of 17th-century houses now home to a raft of artists’ studios and boutiques off Besokaregrand. 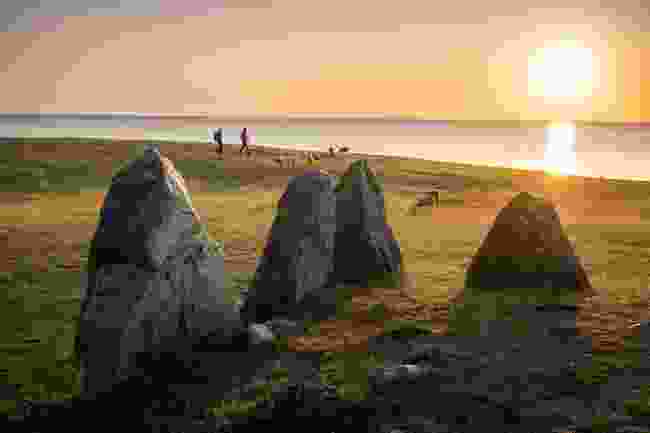 On the surface, the tiny fishing town of Kaseberga doesn’t have much going on, yet a million visitors a year pass through here. The reason is nearby Ales Stenar (Ale’s Stones), 59 hulking Iron Age boulders laid out in the rough shape of a ‘ship’ atop the wind-battered Kasebergaasen Ridge.

It’s said to have been a Viking meeting place, though no one really knows its true purpose. Either way, it’s a compelling, if blustery, stop on any coastal tour. When you’re done with the stones, stay a while to watch paragliders launching themselves off the hillside, wafting over the Baltic coast like colourful ribbons caught in the breeze. 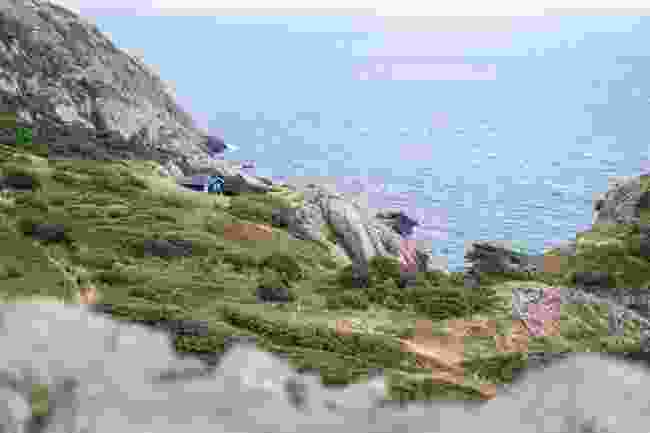 The walk up from Kaseberga to the Ale’s Stones merges with part of the 1,250km-long Skaneleden walking trail that runs through Skane. This tiny section is known as the Osterlenleden (SL4), and is worth the foot leather to explore a blast of the wild coast here. In fact, many parts of the Sydkustleden cycling route cross with the larger Skaneleden (look for the latter’s orange signs), which also veers inland for large stretches.

If you’re tired of cycling, a trek makes for a good way to break up the journey. The main trail is divided into more than 100 sections, so you can also slip a day trek, or longer, into your schedule. The Kullaleden section 1-6 (70km), for example, wraps the Kullen Peninsula and makes a ruggedly handsome few day’s escape from Helsingborg.

5. Stake out a spot on the beach 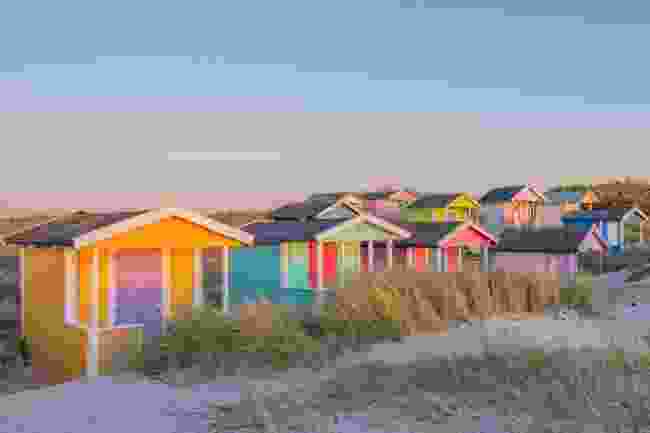 Both Ribersborg (in Malmo) and the white sands of Skanor-Falsterbo draw large crowds on a hot day. The latter especially grew in fame in the early 20th century, as a bathing resort among the middle classes. Its exclusivity is still in demand. The long sands are fringed with prized candy-coloured clapboard beach huts handed down through the generations that now sell for eye-watering sums. But the real ‘Swedish Riviera’ lies east of both.

The powdery white sands and wide shores of Sandhammaren, east of Ystad, are wrapped by high dunes and pines. It’s here you’ll find locals who chose the ‘Svensson life’, the Swedish dream of undisturbed suburbia, cooking up fish on a portable grill at summer beach parties. A surrounding reserve of pines, oaks and birch, planted to help bind the soil and prevent coastal erosion, also makes for the perfect shady retreat for a peaceful cycle on hot summer days.

6. Get wild on the Skanor-Falsterbo Peninsula 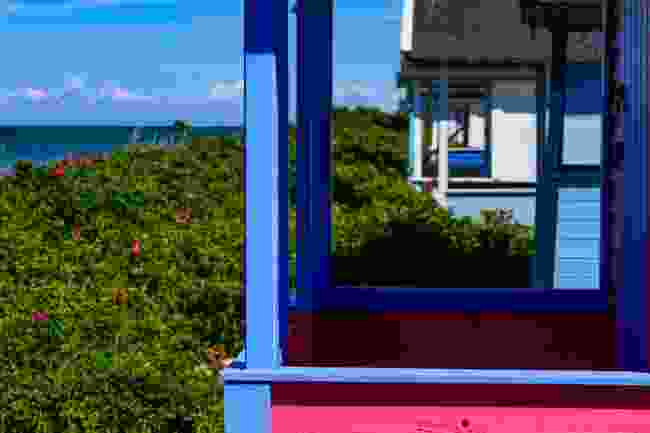 Sweden’s south coast isn’t known for its wildlife. The rare exception is the Skanor-Falsterbo peninsula (aka Naset), home to its eponymous twin towns. True, it’s a popular summer escape (see above) but it also holds a few wild secrets.

On the westernmost tip lies the wetland reserve of Flommen, one of a dozen preserves here. Offshore, harbour and grey seal colonies dwell on the island of Maklappen, linked to the land by a hook-shaped isthmus. For three months a year, you can walk within a literal whisker of the colony (Nov-Jan), while kayak tours with Ram Silwal Adventures also respectfully explore the surrounding waters, often awakening the curiosity of resident seals who bob up to paddlers.

But the real lure for nature lovers here is the birdlife. The peninsula lies on a migration route between Africa and northern Europe, and from late July to October some 500,000 birds fly through. Nabben reserve is a good spot to observe them from July onwards, when the first wader species arrive, and the Naturum Falsterbo has a great rooftop for viewing. 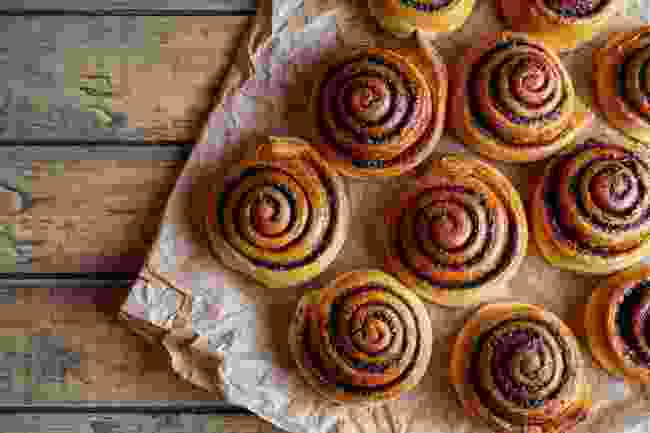 There’s no lack of rolling countryside in Skane; the region produces about 50 per cent of all Sweden’s produce. The policy of allemansratten (right of public access) also means that you can camp just about anywhere for the night, but you’d be missing out on some rather special stays – and breakfasts.

Hotel Orum119 has the best homemade ice cream I’ve tasted (the goats’ cheese and honey is knee-tremblingly good), but its setting, gazing over the wheat fields of Osterlen, is as worthy of savouring. Stick around, too, for its Sunday ‘brunch journey’: slow food in every sense, it demands around five hours to complete.

Angavallen is another country escape, just 25km south of Malmo. Set on a working organic farm, this was Sweden’s first farm shop; now it’s a hotel, shop and restaurant with a firm field-to-fork ethos. It serves only what it grows or produces itself, from beer and bread to meat, veg and cheese. As they say in Sweden, smaklig maltid!

8. Find your inner nudist on Ribersborg 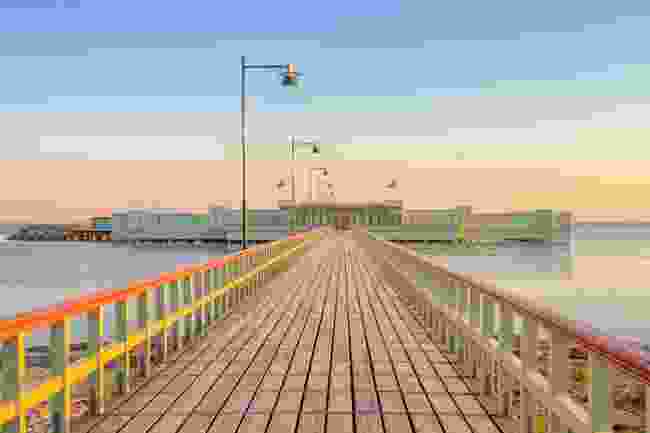 As you enter Malmo, you can’t help but spy the Oresund Bridge, a colossal tail of steel that links the city with Denmark’s Copenhagen and hop-skips the strait it’s named after. Just beyond lies the city’s famed sands.

Ribersborg beach runs the coast west of the city centre. Its shore fills quickly in summer, but the real highlight here isn’t the sand but a rickety-looking pier that leads to the Kallbadhus, an open-air naked spa that pokes out into the Baltic. While men and women are divided, it’s not for the bashful. Strip off, hit the sauna then hurl yourself into the chilly seawater before settling your goose-pimpled buns on the decking outside with a good book, as the locals do.

9. Paddle your way around Malmo 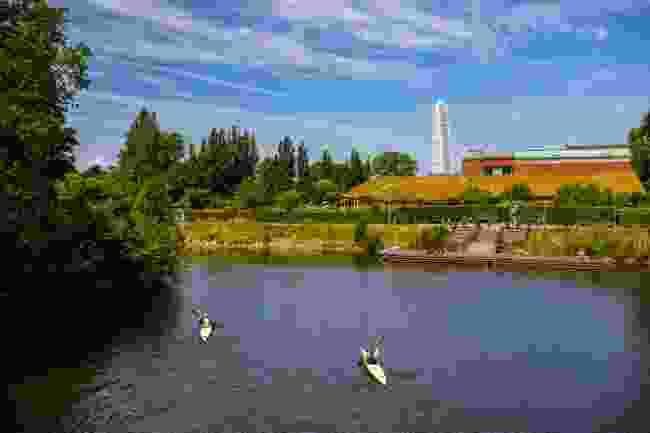 Malmo’s centre is wrapped by a canal, which is a brilliant way to get your bearings, canoeing from park to port. Rent a kayak or canoe at the Malmo Canoe Club. A full circle can be paddled in a couple of hours, while making a note of where to return for later, such as the museums of Malmohusvagen or the boutiques on Stora Nygatan.

Afterwards, fill your belly at Malmo’s Restaurang Spill, on Stora Varvsgatan. It recycles ‘waste’ food from local restaurant suppliers – the stuff that would have been thrown away were it not for a pair of enterprising chefs. It’s a neat idea, and their lunch-only menu (11am-2pm) is rarely known until the night before but is invariably delicious, filled with off-the-cuff experiments. 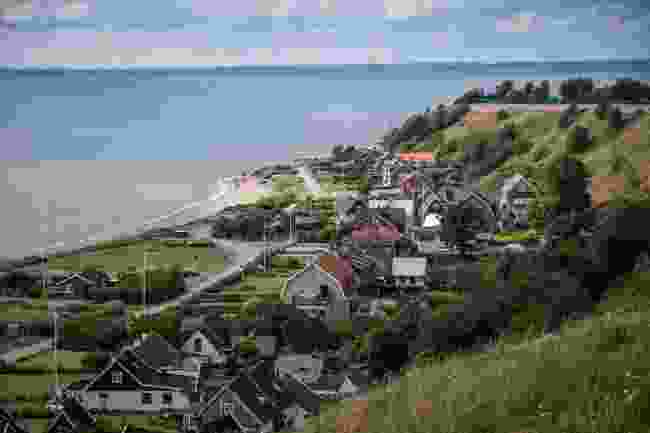 The tug of war (and all-out war) that saw Skane exchange hands between Sweden and Denmark throughout much of the last millennium left not only a throaty twang in the local accent, but a few geographical quirks.

My schedule didn’t allow for it on this journey, but from Ystad you can make your way via the 80-minute ferry to the island of Bornholm, which may lie closer to Sweden (and Poland and Germany) in distance but is actually Danish by nationality. It’s a nice detour for cyclists, and best explored on two wheels, with 1,000-year-old hilltop ruins, pretty harbour towns and the long, narrow shores of the Dueodde Strand, which is even home to a Michelin-starred beach shack.

Another offshore escape is the Swedish isle of Ven, which can be reached on a 30-minute ferry from Landskrona. Life there exists at a different pace – even by Skane standards. Again, it pays to bring or rent a bike. Old hilltop churches, craft shops and alpacas whizz by as you tour the tiny island that has just a few hundred residents.

For route planners and more information on cycling the Sydkustleden, visit sydostleden-sydkustleden.se/en

10 things to do for free in Stockholm

The biggest surprise about cycling across Europe