Tiny Costa Rica is a biodiversity colossus. And thanks to some innovative and sensitive ecolodges, you can see the country’s wildest places in fine, sustainable style

My 5am alarm call was the sonorous roar of howler monkeys staking out their territory. As I woke with a start at Lapa Rios Ecolodge, I saw squabbling squirrel monkeys swing past my terrace, foraging for insects. Giant iguanas sunned themselves on tree trunks and unwieldy looking toucans perched on branches like strange fruit.

A pair of vociferous scarlet macaws preened each other, while a Golfo Dulce poison dart frog – barely larger than a thumbnail – hopped out of my path. Spider monkeys put on a show of aerial gymnastics around the swimming pool. And that was all before I’d had breakfast. Welcome to Costa Rica, a wildlife wonderland.

Millions of years ago, the country became part of a land bridge connecting the North and South American continents, allowing their flora and fauna to mix – no wonder the Spanish conquistadors christened it the Rich Coast.

Today the country is home to an estimated 6% of the world’s plant and animal species. The sheer diversity of its exotic flora and fauna is staggering: around 850 species of birds, 600 species of butterflies and almost 240 types of mammals, including humpback whales, dolphins, sea turtles and four species of monkey – all in an area around two-thirds the size of Scotland. But it hasn’t all been plain sailing.

In 1940, 75% of the country was forested but by 1987, this had dropped to 21%. Fortunately the forward-thinking government realised it needed to protect the country’s greatest asset and it’s back up to 52%.

Now Central America’s number one ecotourism destination, 27% of Costa Rica’s landmass is devoted to national parks and reserves, encompassing around 160 protected areas, from dense rainforests to mist-wreathed cloud forests, marine environments and still-smoking volcanoes. And Ticos and expats alike are delighted to share their pura vida – pure life – with you. 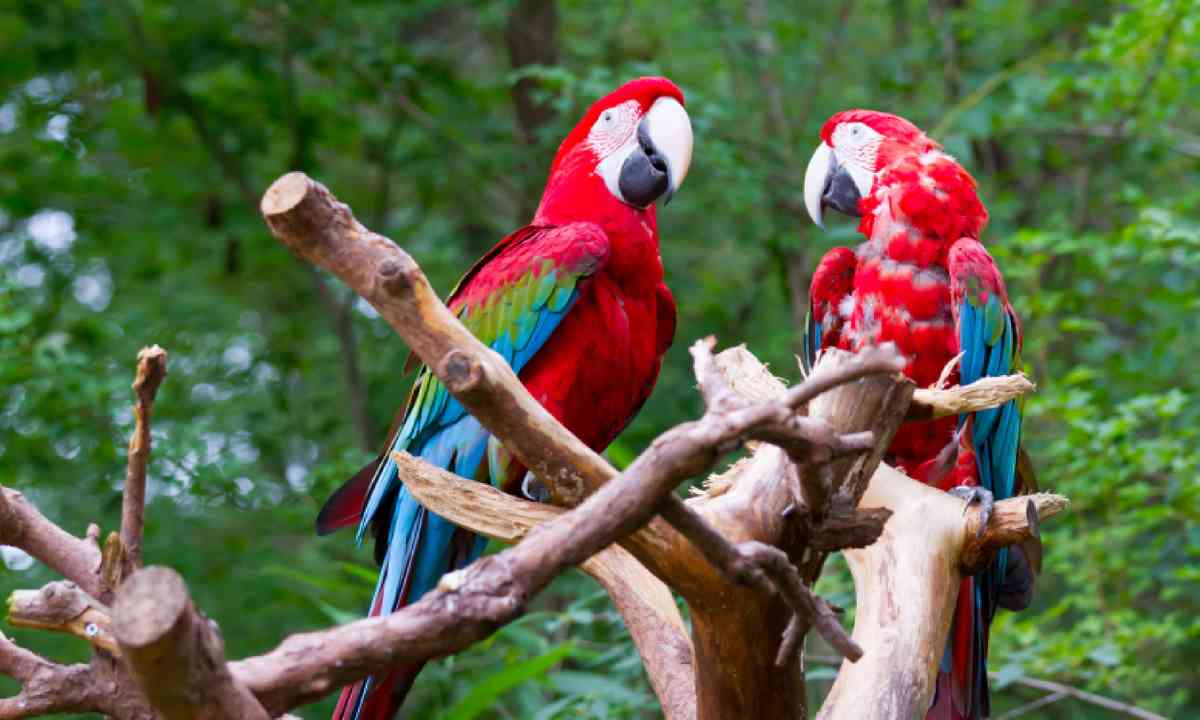 Hailing from California, Teri and Glenn Jampol rescued a piece of land in the fertile Central Valley from a Motocross dealership. It was 1985 and they had no sustainable models to follow; it was, in their words, “trial and a lot of error”.

But their hard work paid off with the creation of Finca Rosa Blanca, a carbon-neutral organic coffee farm, private nature reserve and art-filled boutique hotel, surrounded by a modern-day tropical Eden. Here, everything is super-sized, from the butterflies – giant blue morphos – to the foliage – enormous swiss-cheese plants, elephant ears as big as umbrellas, luxuriant ferns, lofty palms festooned with creepers and tree branches laden with bromeliads.

In the late 1980s, tourism was growing at a rapid rate and eco-resorts were sprouting up faster than you could say ‘alfalfa’. With even car hire firms jumping on the eco bandwagon, it was difficult to tell if you were being greenwashed. Thankfully there is a way to be sure. The Government-run CST (Certification for Sustainable Tourism) is a programme that hotels voluntarily join and are awarded one to five leaves, based on several core principles, including how they minimise their impact on the environment, sponsorship of projects involving the local community and their contribution to increasing environmental knowledge within that community.

It's something Glenn has been involved in since its inception and in 2003, Finca Rosa Blanca became the first hotel to gain the maximum five leaves. One of its key innovations is using the abundance of sunshine to fuel its electricity and pump and heat its water. “It’s not perfect, but sustainability in Costa Rica is light years ahead of other, more developed countries,” Glenn told me.


Along with its environmental projects, Finca Rosa Blanca aims to introduce guests to the country’s often overlooked culture and cuisine, with visits to cheese-makers, vanilla and cacao farms, and a traditional trapiche (sugar mill). The food it serves is as organic as possible, and if it’s not plucked from their own greenhouse it’s locally sourced.

Its chickens provide the eggs for breakfast, which are served with gallo pinto (rice and beans), piquant pico de gallo salsa and freshly made corn tortillas, all washed down with its own delicious organic coffee.

I visited the local market with the chef, where stalls were piled high with tropical fruits – guava, jocote, soursop – and giant tubers, before heading back to the kitchen and learning to conjure up a Caribbean-style ceviche with coconut milk and Panamanian peppers, and tasty tamarind and coffee chicken. 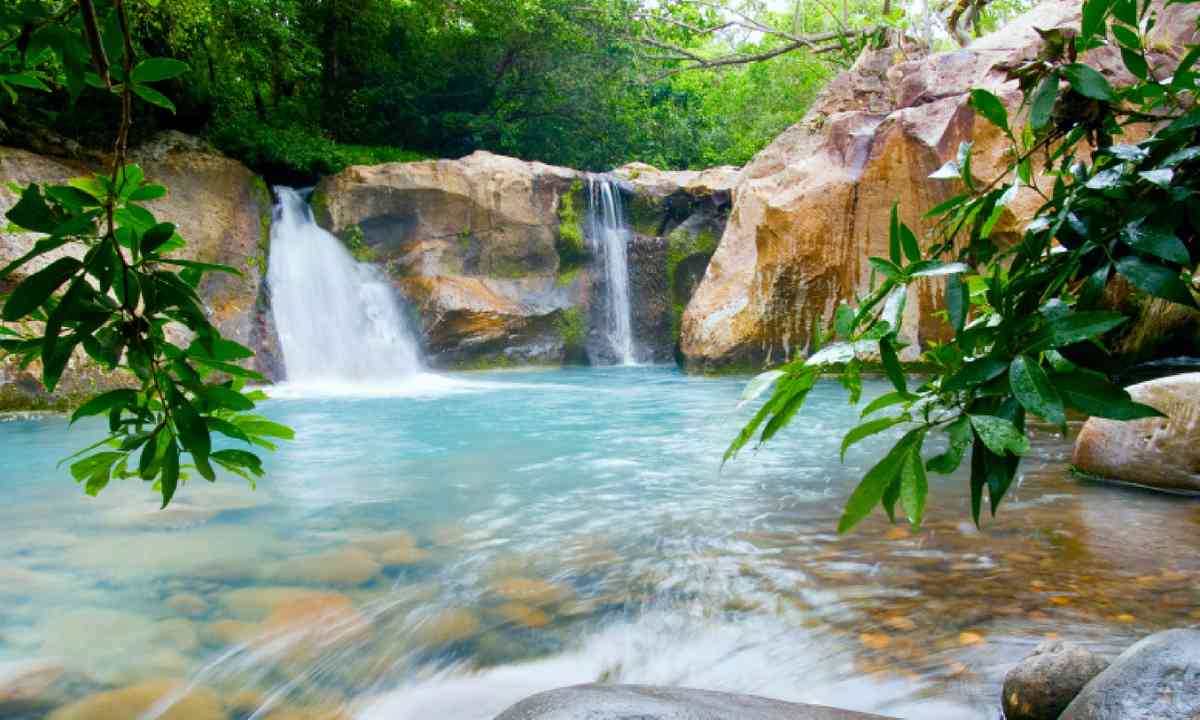 A few hours north of the Central Valley, sitting high on the country’s mountainous spine and reached by a bone-jangling unpaved road, lies Monteverde. It was established by a small group of American Quakers in the 1950s, pacifists who came to Costa Rica to evade Korean War conscription.

The Monteverde Cloud Forest Reserve sits at the meeting point of the Continental Divide, where moist air from the Caribbean meets dry air from the Pacific, creating a hotbed of biodiversity.

On a clear day, you can see all the way to the Pacific from the terrace at Hotel Belmar, my base in Monteverde. Opened in 1985, it’s been committed to environmental and social responsibility from the start and has its own sustainability department dedicated to implementing programmes from reforestation to a biodigester that cleans wastewater.

On my first night there, I headed out with guide Roy. Squelching along a muddy forest trail I peered into the enveloping darkness, the air thick with the scent of damp vegetation. The trees parted to let a shaft of moonlight through, when suddenly Roy shone his torch into a tree, highlighting the golden eyes of a kinkajou, an intriguing cross between a monkey and a small bear. He pointedout a somnolent three-toed sloth lying supine on its twig bed and, far more deadly, a venomous side-striped palm pit viper.

Early the next morning I set off to explore Curi-Cancha, a cattle ranch turned private reserve, with trails winding through primary, secondary and open forest. Bathed in bright sunlight, the forest took on an entirely different aspect. Roy was on high alert for the elusive quetzal, described by a twitcher friend as one of the Holy Grails of birding. He found not one, but two: young males with their pseudo-mohawks and long tail feathers, resplendent in their brilliant crimson and blue-green plumage. 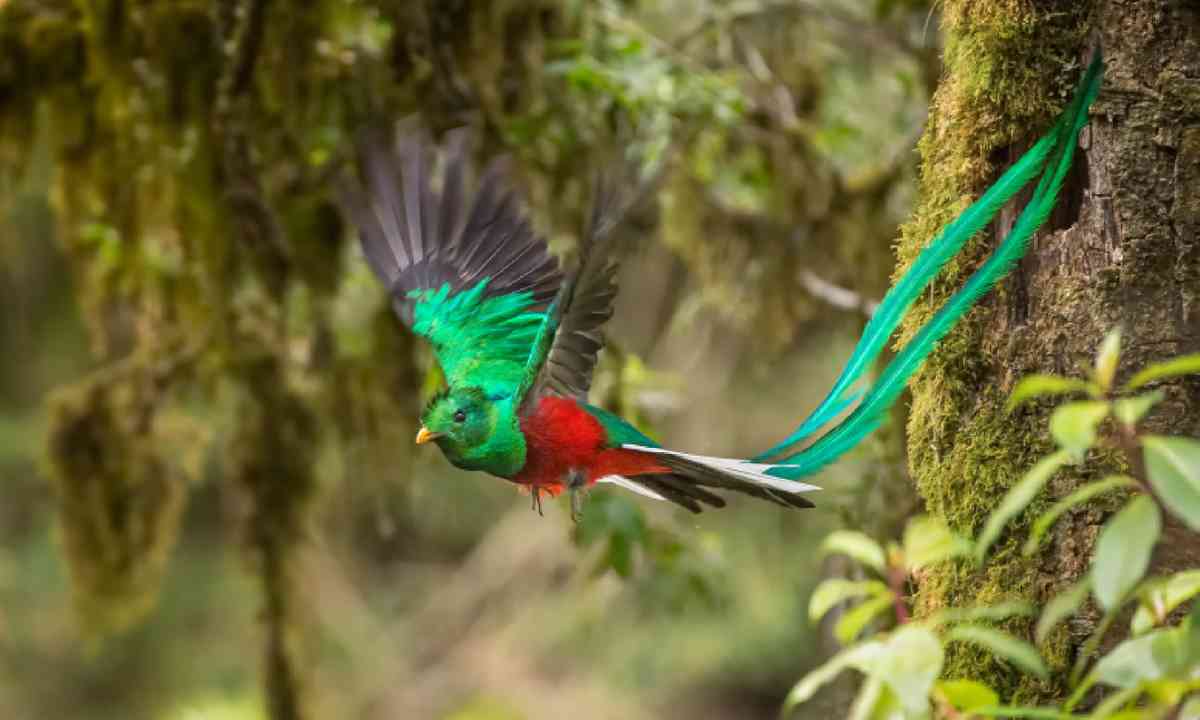 Through the telescope, I spied on an iridescent green violet-ear hummingbird singing to attract a female, his clear, sweet notes echoing for miles through the forest. Easier to spot, evocatively named hummingbirds – violet sabrewings, greencrowned brilliants, coppery-headed emeralds – hovered excitedly around the sugar-water feeders, and there was an audible buzz from their tiny wings as they beat at around 70 times a second.

But it wasn’t just about birds. We stopped to look at giant trees trapped in the ruthless embrace of a strangler fig, miniature orchids, the tracks of an armadillo and a mass of resting daddy longlegs that hung from a trunk like a patch of black hair. As we left, the forest became enveloped in atmospheric swirls of mist.

At the turn of the 20th century, the government gave what became the all-powerful United Fruit Company 3,200 sq km of land on the Central Pacific Coast, in return for helping to build a railway line. The resulting banana plantations – now filled with lines of African palms, harvested for oil – broke up the biological corridor that linked Arenal Volcano, Monteverde and the south Pacific coast, creating a biological island.

In 1972 this became the Manuel Antonio National Park, the country’s smallest and one of its most popular. Fronted by pristine beaches and backed by verdant rainforest, it’s one of the easiest places to spot wildlife.

A black spiny-tailed iguana greeted me at the entrance. Then, along the Perezoso (Sloth) Trail, my sharp-eyed guide spotted a cyanide-oozing millipede that smelt faintly of almonds, glass frog eggs attached to the underside of a leaf and a perfectly camouflaged Jesus Christ lizard – so called because they can walk on water – basking on a log.

I didn’t need him to point out a boisterous posse of squirrel monkeys as they scampered from tree to tree grabbing at anything interesting they could find. Nor the bad boy white-faced capuchin monkey that bared its fangs at us strange creatures staring up at it. And certainly not the crowd that had gathered around the three-toed sloth, slowly inching its way down a tree for its weekly toilet trip.

I strolled back from the park along Espadilla Beach, a glorious sweep of dark volcanic sand, where families played football, salsa blasted from radios and novice surfers wavered unsteadily on their boards before crashing into the waves. 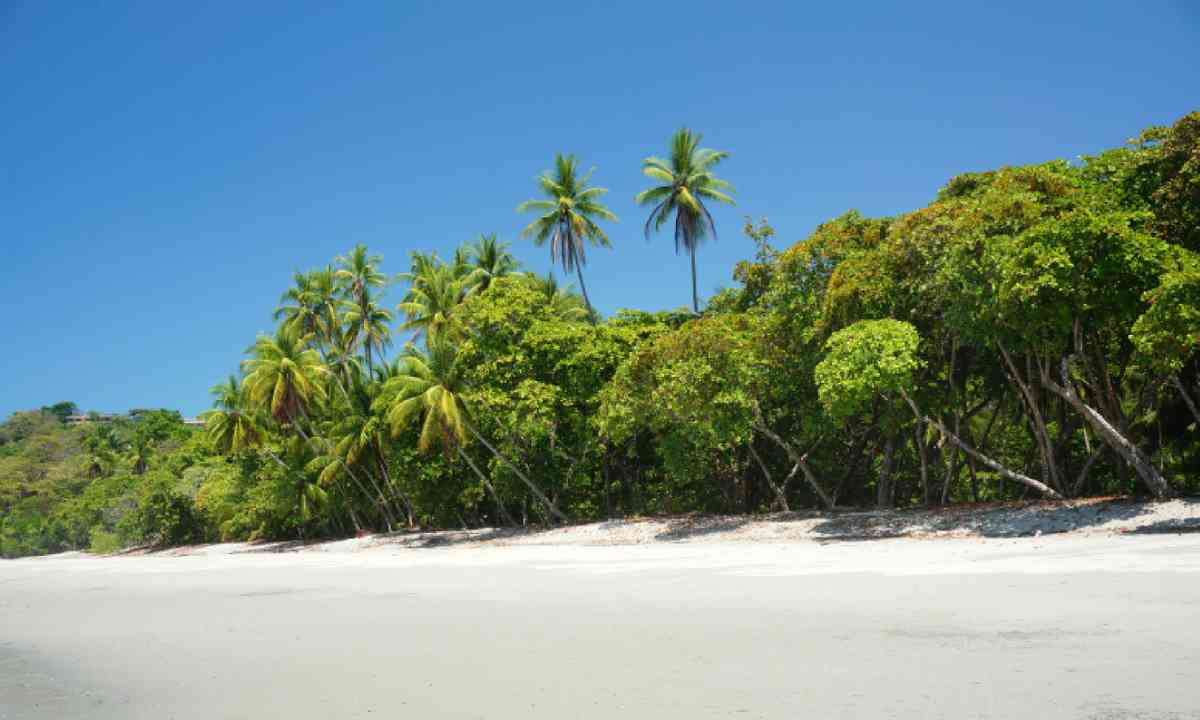 I was headed for Arenas del Mar Beachfront and Rainforest Resort, which is set on a hillside overlooking the sea. The resort, opened in 2008 and built on land owned by Glenn Jampol of Finca Rosa Blanca, started as an experiment in eco-luxury: could a new five-star hotel also be a five-leaf hotel? Well, it turns out it can.

Among Arenas del Mar’s other initiatives, its convincing thatched roofs are actually made from recycled plastic rather than the endangered suita palm, there are no chemicals in the pool (which makes it safe for birds to drink) and its reforestation programme has created an ecological corridor, meaning that the monkeys that inhabit the national park live here too.

Just before sunset, I wandered down to the hotel’s private beach. A brown pelican dived from the cobalt-blue sky in search of fish but surfaced empty beaked. With not another soul in sight I waded into the surf, buffeted by the gentle swells and felt like the ocean was mine alone.

Flying south, I saw the regimented African palms give way to natural forest that looked like clumps of giant broccoli. I was headed for the Osa Peninsula, on the country’s wild south-west Pacific coast, an area of rainforest, rivers and mangroves, ringed by unspoiled beaches. It’s where, in the 1990s, former US Peace Corps workers John and Karen Lewis, decided to turn a cattle ranch into an ambitious conservation project and private reserve. The result was Lapa Rios.

Built to blend into the landscape, its 16 bungalows, camouflaged by forest, overlook a vast expanse of virtually deserted beach. There’s no air conditioning but the walls are open to allow the Pacific breeze to filter through. There’s no TV either, just the sound of the crashing surf. The alfresco shower was perfect after a day exploring, while the alfresco hammock was perfect for stargazing.

There was almost no need to leave the lodge, as everything dropped by. And you could feast on home-grown, organic produce and simply lounge by the pool, safe in the knowledge that your hedonism was being offset by the lodge’s environmental projects. Organic waste from the restaurant goes to feed some very contented-looking pigs; in turn, their waste becomes methane gas, which cooks the staff meals.

The lodge has planted 2,000 native trees; you can even plant your own. But I had to explore the steamy rainforest, sweltering in long trousers and rubber boots as I cautiously navigated the slippery root-laced trails. On a night walk, we came across a pair of sleeping toucans nuzzled together on a high branch, a primary coloured red-eyed tree frog and a coiled (but thankfully docile) fer-de-lance snake, just off the path.

On the beach, I watched enthralled as a spider monkey grabbed a coconut and bashed it against a branch until it released its sweet juice. That night I was lulled to sleep by the waves, the chirp of geckos and the trill of frogs, and woke to a chorus of unidentified chirrups, whoops and caws.

There’s no internet, which might be your idea of hell, but being so connected to nature and disconnected to the outside world, even for a short time, seemed rather heavenly to me. I’d found my pura vida.