Famous for its pasties, there are plenty of surprises for food and drink travellers to Cornwall, from the UK’s best fish and chips shop to gin distilled with clotted cream… 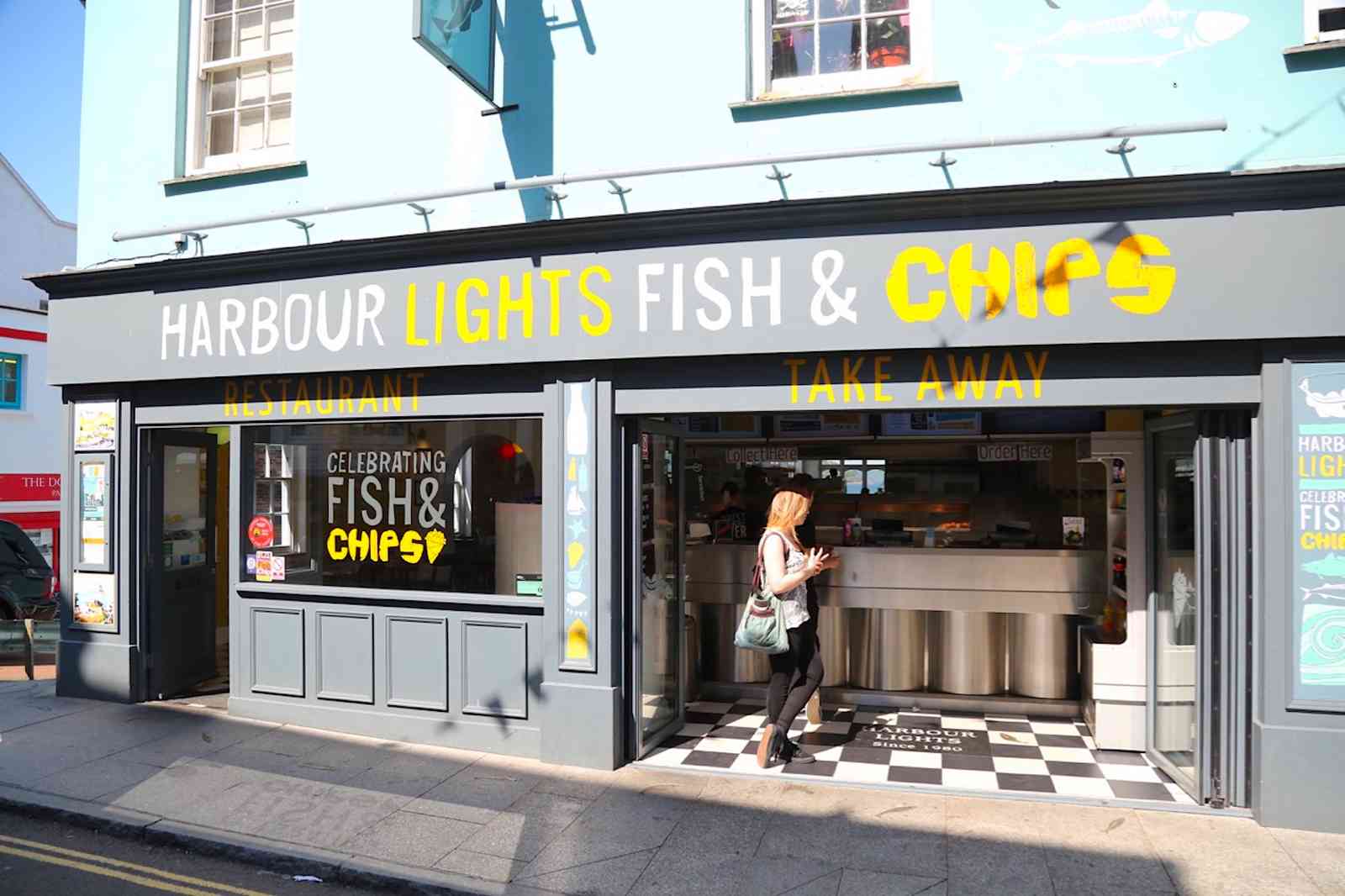 Daft Punk and the Two Ronnies might disagree, but, according to the Harbour Lights restaurant in Falmouth, fish and chips are “The Best Double Act Ever”.

Without any weepy speeches or #sowhite controversies, the ‘chippy’ was recently named the Independent Fish and Chip Restaurant of the Year in the ‘Oscars of the fish and chip world’ (the 2017 National Fish & Chip Awards, organised by Seafish).

The harbourside restaurant's decorated inside with old black and white photos of Falmouth’s fishing history, with toilets marked ‘Buoys’ and ‘Gulls’. Their fish is responsibly sourced, soft and flaky, fried in veg oil, rather than beef dripping.

“People know Cornwall for fish and the Cornish pasty,” Harbour Lights’ owner Pete Frazer explains. “Cornwall seems to get more and more popular all the time. TV programmes like Poldark and Doc Marten have also done us a favour. Maybe foodies think they’ll bump into Mr Poldark when they come here.” You can’t talk about fish in Cornwall without talking about Rick Stein. For more than 40 years, Stein’s been running restaurants here, having spent holidays around Padstow. He now has a business empire that includes eight restaurants across Cornwall, including Porthleven, Falmouth and St Merryn, four shops, a cookery school and 40 hotel/B&B bedrooms. In Padstow alone, he owns a deli, a chippy, a bistro, a bar, a café and a restaurant.

Stein’s been a huge part of putting Cornwall on the map as a foodie destination. His flagship restaurant, The Seafood Restaurant, on the edge of Padstow harbour, has an international menu, drawing on Stein’s travels around the world, such as Goan fish curry. Mostly, though, it’s about classic fish and seafood cooking.

“It`s hard not to fall in love with Cornwall, especially for someone like me who come from Brittany,” Head Chef Stephane Delourme says. “It’s got a magnificent coastline with spectacular beaches. I feel very lucky to be able to live in Cornwall. I can cook world class food here because we`ve got the best local food producers.”

The Seafood Restaurant’s on the pricey side, a special occasion choice, rather than a Friday night out, with a cool, quiet B&B above the restaurant for those making a weekend of it. Try the warm monkfish and tiger prawn salad, then splash out on a slab of meaty turbot in rich Hollandaise sauce. The chocolate fondant makes a fine finish. 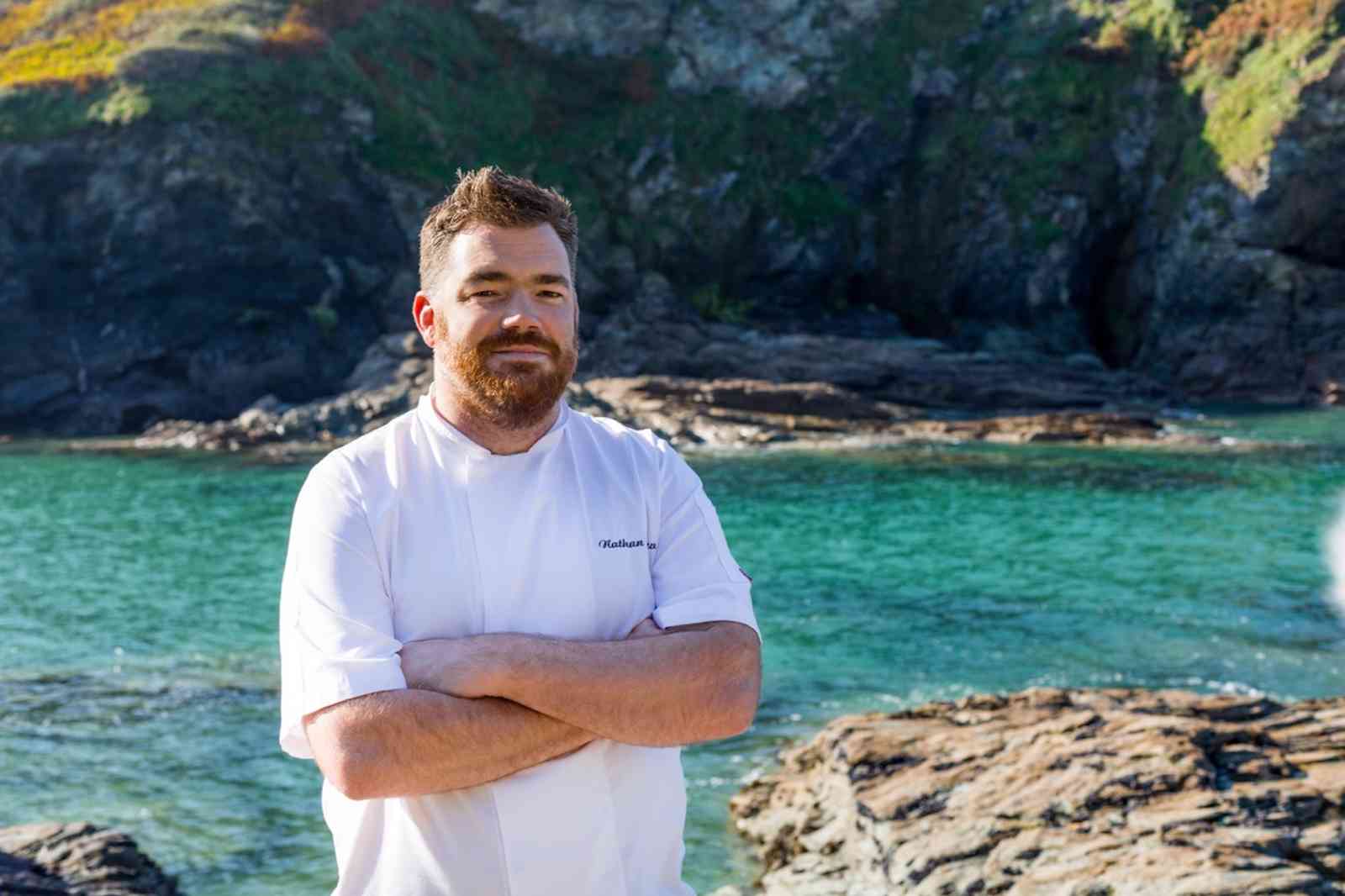 Stein's far from the only big name in Cornwall. He’s not even the only big name in Padstow. Just up the road, Michelin-starred Paul Ainsworth serves top end local Cornish fare at the Paul Ainsworth at No6, while at nearby Port Isaac, there’s a seafood tasting menu from Nathan Outlaw, who trained under Rick Stein, at the not very imaginatively named Restaurant Nathan Outlaw, which was just singled out as the No.1 Best Restaurant in the UK in the Good Food Guide 2018. Another Michelin-starred chef, Chris Eden, cooks local produce across at Driftwood Hotel in Portschatho.

Down at kite-surfing hotspot Watergate Bay, Jamie Oliver’s Fifteen Cornwall, former sous chef Adam Banks has just returned to bring in a new menu of Spanish and Italian-inspired small plates and tapas. There are far worse places in the world to sip a good local Gin and Tonic, tuck into lobster tail and pea salad, and watch the sun set over the Atlantic. 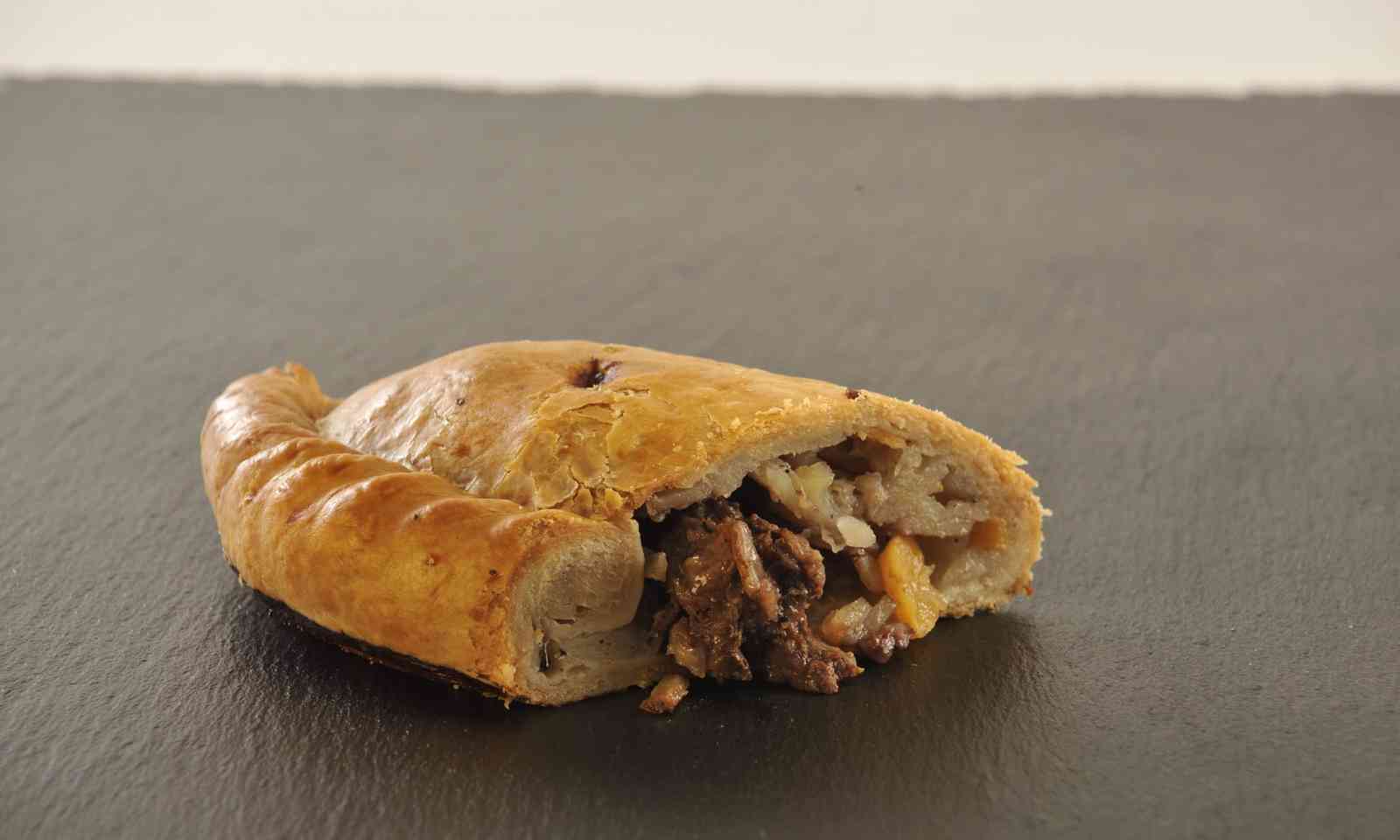 Cornwall’s most famous export dates back to the 1800s, when the region was dominated by tin mining. The humble pasty was a standard lunch for miners, provided a big portion of meat, veg and carbs to fuel tough working days.

The pastry crust not only kept the tasty insides warm, but also helped protect the miners from arsenic, which was strongly present in the mines. The crimped crust was actually thrown away, rather than eaten, once it had done its job, and ‘donated’ to the spirits of the mines, known as ‘knockers’.

There must be a busy diary of pasty competitions around the world, as every shop in Cornwall seems to have a sign outside boasting of one award or another, but Clough’s in Padstow, the Hidden Hut in Porthminster and The Cornish Bakehouse in St Ives are all personally tried and tested, while Pengenna Pasties is a good lunch stop if you’re visiting King Arthur’s Castle at Tintagel. It isn’t immediately easy to find, but The Hidden Hut, situated on the South-West Coastal Path above Porthcurnish Beach, is worth seeking out. The little hut has a great view of the beach and serves up hearty Cornwish food, including pasties. Try the Cullen Skink – smoked haddock, soft potatoes and leak in a creamy soup – and you’ll have zero regrets.

There are plenty of other gems waiting to be discovered. In the restaurant-filled town of Porthleven, Amelie’s friendly team serve up fresh seafood and Italian dishes in a romantic candle-lit atmosphere, overlooking the harbour. Go for the wood-fired pizza with mushroom and crayfish tails.

The Rum and Crab Shack on the seafront of St Ives is another great find: lively, warm and welcoming inside, serving up local Cornwall ales and a hard-to-choose-from-menu, including Crab and Rum soup, Dead Man’s Fingers’ Ribs, Lobster and Crayfish Rolls…. The Dead Man’s Grip cocktail (an egg white sour with passion fruit and rum) makes a good closer. 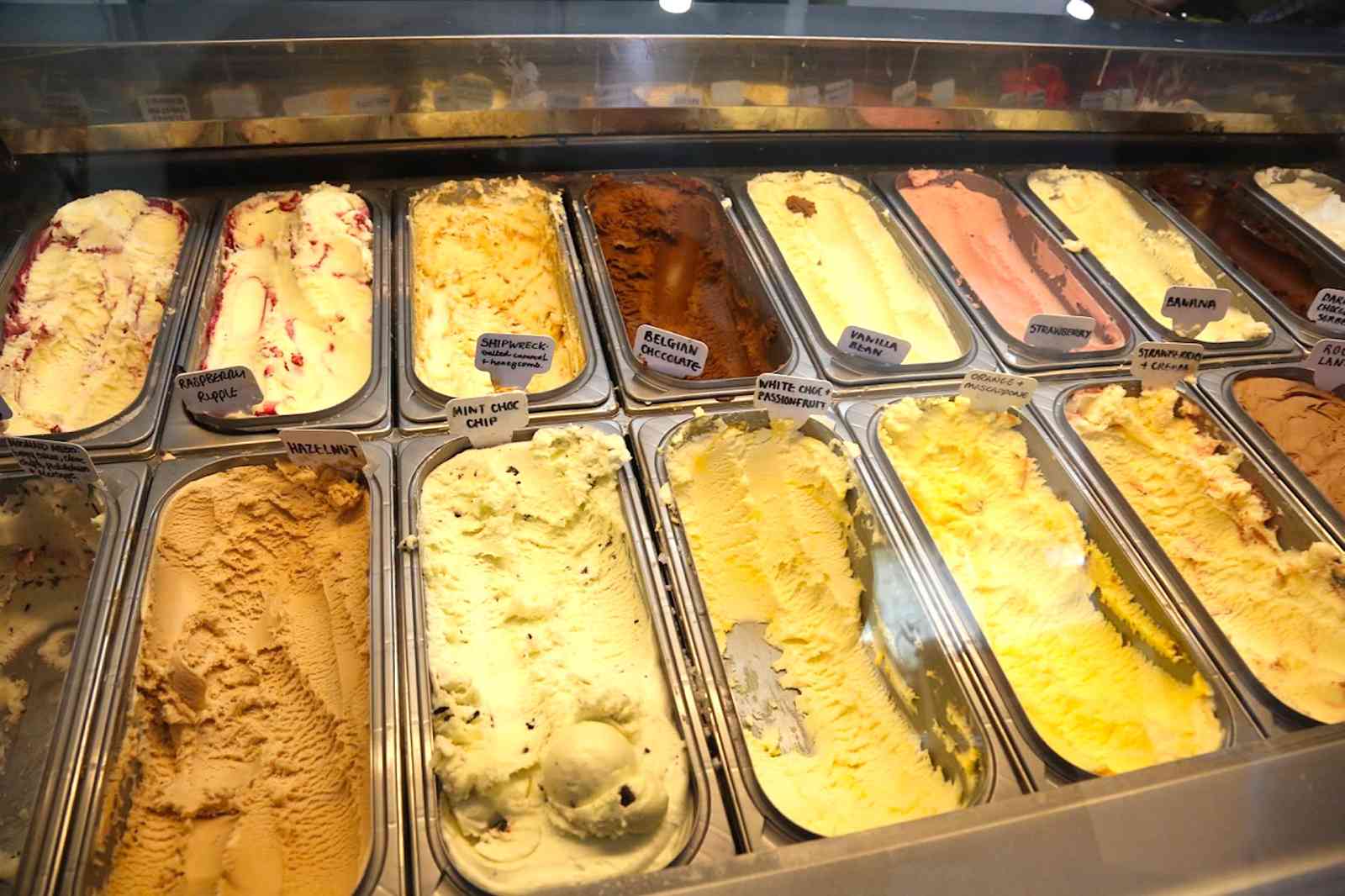 Travelling around Cornwall comes with a hefty dollop or two of cream. You can find a cream tea easily in cafes across the region, but for an old school, very English experience with warm, freshly baked scones, fresh jam, thick clotted cream and an exceptional view of Gerrans Bay, head to The Nare hotel on the Roseland Peninsula. “Remember to take the scone and put jam in first, then cream,” I'm told by a member of staff. “Not the other way around. Jam first, then cream is the Cornwall way. I don’t know why, but they do it the other way in Devon.”

If you need something cooler in the summer, Cornwall’s also famous for it’s ice cream, much of it using the famously thick clotted cream. Moomaid is a local ice cream company, based out of a farm at Zennor, worth seeking out, with ice cream flavours including Cornish clotted cream, Belgian chocolate and Shipwreck (salted caramel and honeycomb). You can find their shop on St Ives’ harbourside. There seem to be few corners of the world where craft beer hasn’t been booming in the last decade. Cornwall is no exception. “It’s getting big. People are looking out for craft beers,” says Des Archer, half of the husband and wife team that runs Padstow Brewing Co. “A lot of it is awareness that beer and lager doesn’t need to be bland.”

The company has a shop and tasting room on the backstreets of Padstow, where they sell their beers, keeping things small (for now) so they can be creative with what they produce. “Doing it that way is fun,” Andrews explains. “People come in here and they ask what’s new?”

Their beers range from a refreshing Pilsner to a hoppy Mayday, with the excellently named Pocket Rocket a personal favourite, all of them good company for a few hours on a beach or harbourside in the Cornwall sun.

Rebel Brewery, near Penryn, and Harbour Brewery, on the outskirts of Bodmin, are among the other small craft beer-makers popular with locals. In the increasingly celebrated UK wine scene, the vineyards of south-east England, around Sussex, have been getting the lion’s share of the attention. Cornwall’s less well-known wine, locals argue, gives the south-east more than a run for their money. “We have less yield, but higher qualities,” suggests Engin Mumcuoglu, owner at Trevibban Mill, a vineyard and farm near Padstow that’s certified ‘Organic’ by the Soil Association. “I think we make better wine in terms of the minerals in the ground and in the wine. We’re very small but the quality is very high.”

There’s still surprise, among travellers, that Cornwall produces great wine, Mumcuoglu continues. “They expect we can make something that is drinkable. People think of homebrew, English wine. But people who try it are incredibly surprised.”

Elsewhere, Camel Valley Vineyard, near Bodmin, is the largest vineyard in Cornwall and one of the most respected wine-makers in the UK, a trailblazer in the south-west, whose wines now regularly compete and win against French Champagne and sparkling wine-makers, like Bollinger.

Near Penzance, Polgoon is a small friendly winery and orchard, with an excellent café (The Vine House) and a range of wines and ciders.

What no one seems to have mastered yet is a world class red, though some are trying. “We don’t quite have the amount of sun for a really good red,” admits John Coulson, owner of Polgoon. Given that global warming is responsible, at least in part, for the Champagne-esque wine-growing climate in south-west England, give it another 10-20 years and we may just have the right conditions for great reds, too (just at the expense of the planet, obviously). The sparkling ciders at Polgoon and Trevibban Mill are every bit as good as the wines they produce: crisp, refreshing, perfect for drinking in the sun. “It’s down to the quality of the fruit,” says Polgoon’s John Coulson. “It tastes clean all the way through.”

Cornwall’s ciders are also generating interest, as cider-drinking booms across the UK. “We’re improving what we’re doing with wine and cider all the time,” Coulson says. “We have fantastic produce down in Cornwall - meat, fish, cheese, cream, wine, cider – and it all works together.”

Trevibban Mill also does a delicious cider, almost like a good sparkling wine. “Cider’s so popular here,” Mumcuoglu says. “You can get cider anywhere, but with good cider, people really want to taste the fruit.” 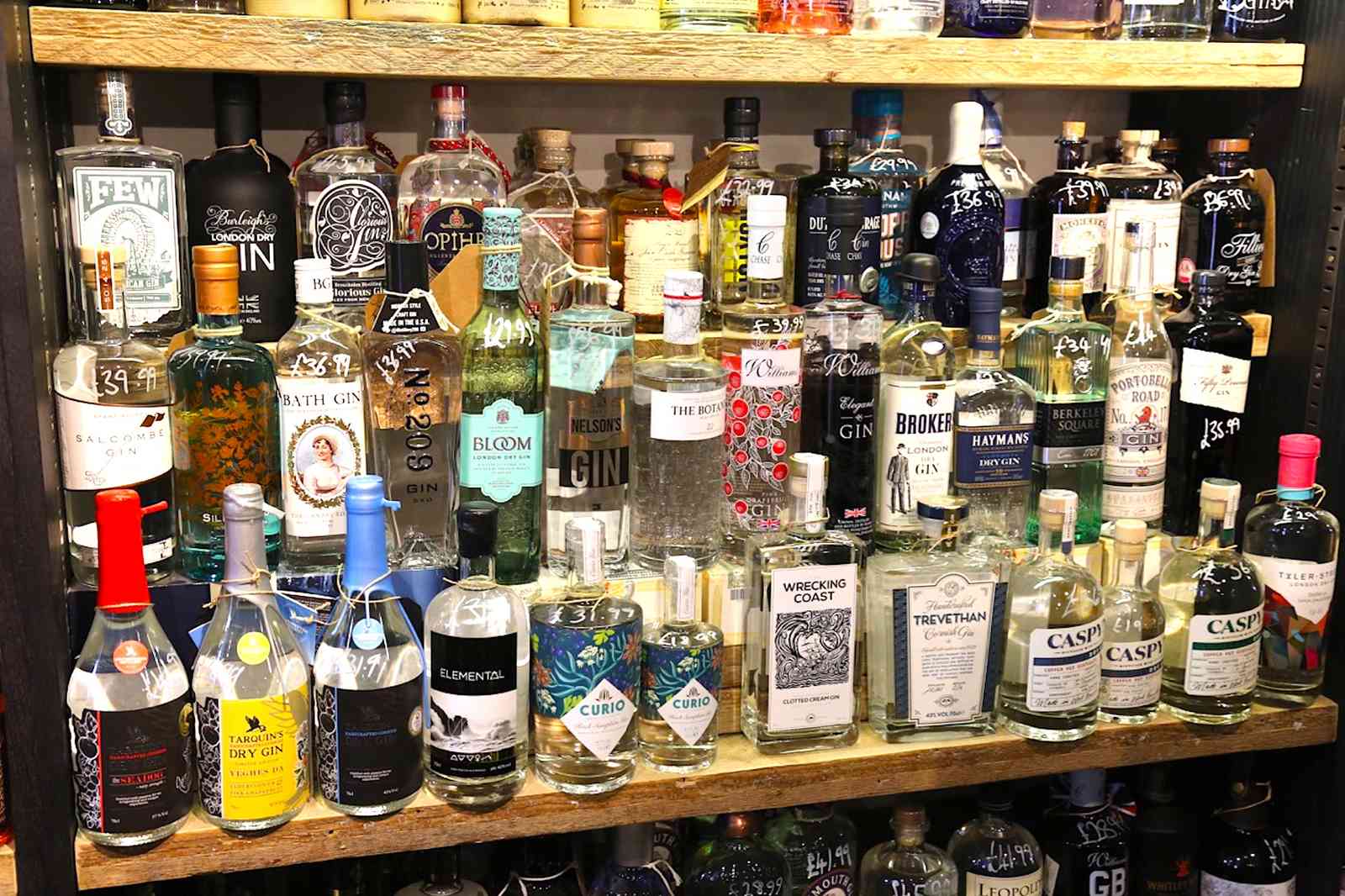 As if all that wasn’t enough, Cornwall scores additional points as one of the UK’s top producers of gin, with seemingly endless varieties sold in local shops, bars and restaurants.

Cornish gin just made waves internationally with Southwestern Distillery's smooth tasty Tarquin's Cornish Navy Strength Seadog Gin winning Best Gin In Show at the San Francisco World Spirits Competition 2017, topping a list of 268 global entries. “The Cornish gin scene is a reflection of the Cornish food and drink scene: it’s lively, ambitious and punches well above its weight, with several world-class producers,” says Tarquin Leadbetter, the man behind Tarquin’s gin. “Things are only set to get better, as we start to give the big boys a run for their money.”

Trevethan Gin is another local gin well worth trying, with a more herby, floral flavour, while The Wrecking Coast make what might be the ultimate Cornwall product: gin that’s distilled using Cornish clotted cream. “We use Rodda’s Cornish Clotted Cream and Cornish Spring Water in our gin," The Wrecking Coast’s Craig Penn says. "It has been called ‘the Cornish Genie in a bottle’. ”

The author stayed at The Seafood Restaurant (www.rickstein.com), Rick Stein’s B&B in Padstow; at The Headland hotel (www.headlandhotel.co.uk) on the edge of Newquay, close to Fistral Beach; and The Nare (www.narehotel.co.uk/welcome), above Carne Beach on the Roseland Heritage Coast.