Ardnamurchan clings to the coast just a few miles from the tip of a rocky finger of land that’s as far west as Britain goes. You approach it (slowly) via a ferry, and a sinuous single-track road that hems in the crumpled and craggy landscape and makes getting here an escapade in itself.

The site is situated to the west of the village of Kilchoan, on a small south-facing croft that has stunning views down the Sound of Mull to Morven and Mull. This far-flung location makes it the most westerly campsite on the British mainland. Remarkably, it is the brainchild of one man, Trevor Potts, who has turned an old croft into this Elysian camping field. 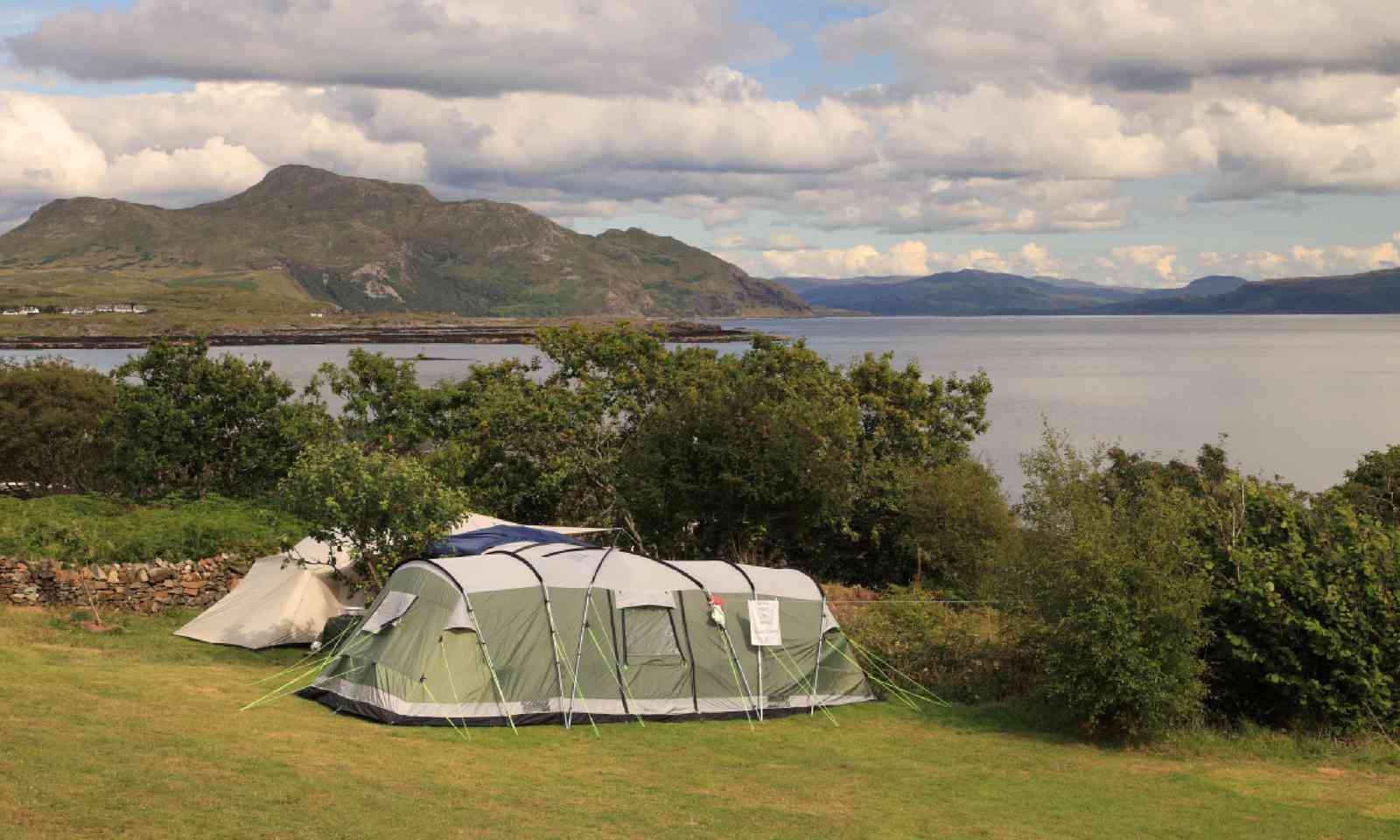 Some Scottish campsites enjoy a scenic setting shrouded by mountains, others sit by an ice-blue loch or a wee burn that ripples through the heart of the site. Caolasnacon boasts all three, as well as catatonically relaxed owners who let campers pitch where they want and light campfires too. Yes, they take caravans and have some statics, but they also treat campers with respect and nothing really detracts from what is definitely the most appealing campsite in the area.

The pitches by the loch are ideal for kayakers and canoeists, who can just launch out into Loch Leven, while walkers will want to pitch further inland for the easiest access to the mountains – the Mamores across the water to the north, and Glen Coe’s epic mountainscapes to the south. 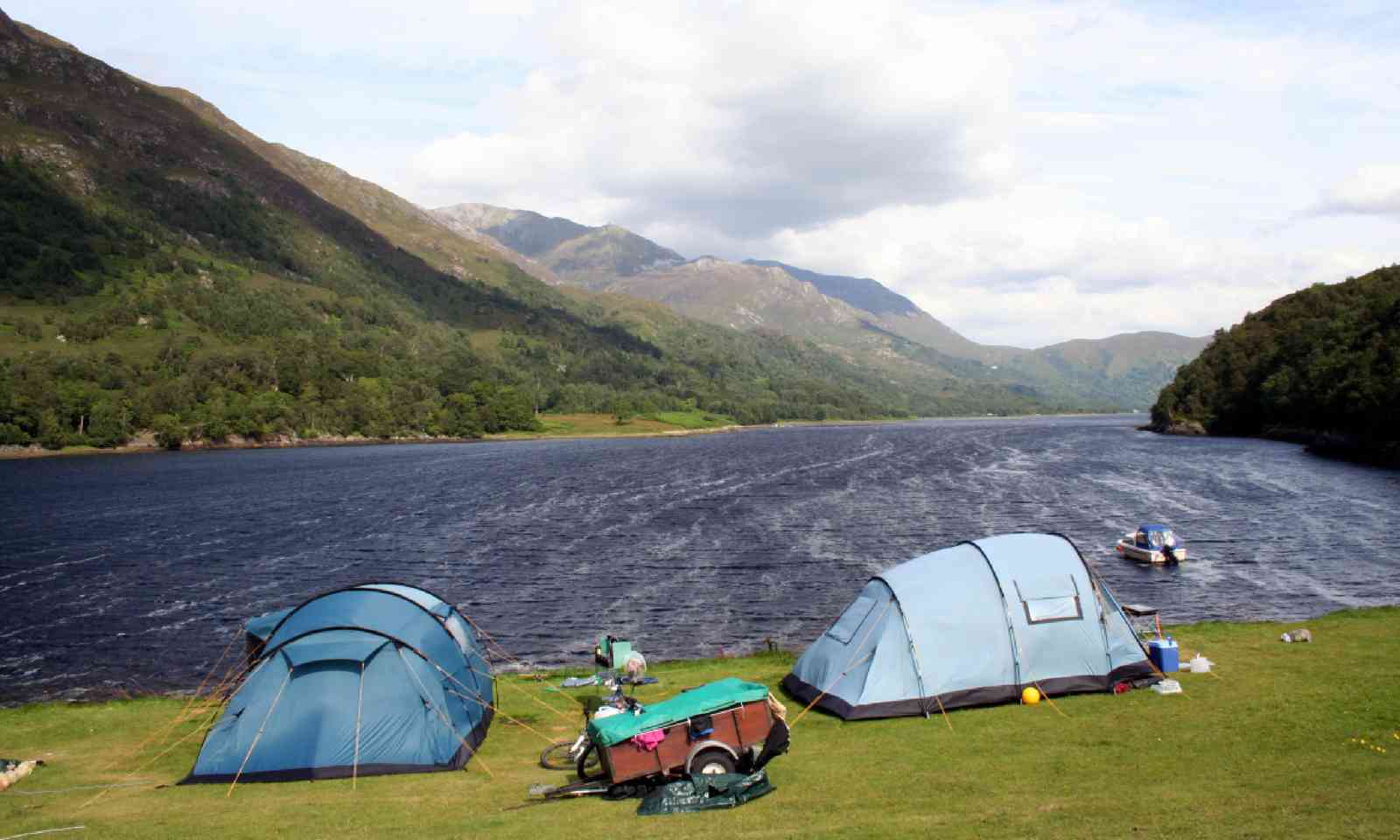 What's allowed Tents, campervans, dogs, caravans, big groups, young groups – yes.
Amenities 50 pitches. Those near the loch can be windy, but it does give some protection against the midges. Campfires allowed. Clean and efficient washrooms with decent showers, free hot water, toilets, washbasins, washing-up sinks, laundry and electric hook-ups. Gas can be obtained at the farm. Undercover chemical disposal point.

3. Cashel Camping in the Forest

The ‘bonnie banks’ of Loch Lomond have been Scotland’s rural retreat for many a year. Teeming with dramatic hills, serene lochs and the freshest of fresh air, the region’s popularity shows no sign of dwindling – and rightly so. Activities for the lively are bountiful, as are interesting places to try some traditional food, knock back a dram of whisky or experience one of Scotland’s standout strolls, along the West Highland Way.

Located right on the peaceful shores of Loch Lomond is Cashel Camping, a welcoming, harmonious campsite with one hell of a view. Cashel is very large but, despite having over 160 camping spaces, it’s not hard to find a pitch with unobstructed loch views, although to guarantee this we suggest you book a premier pitch. 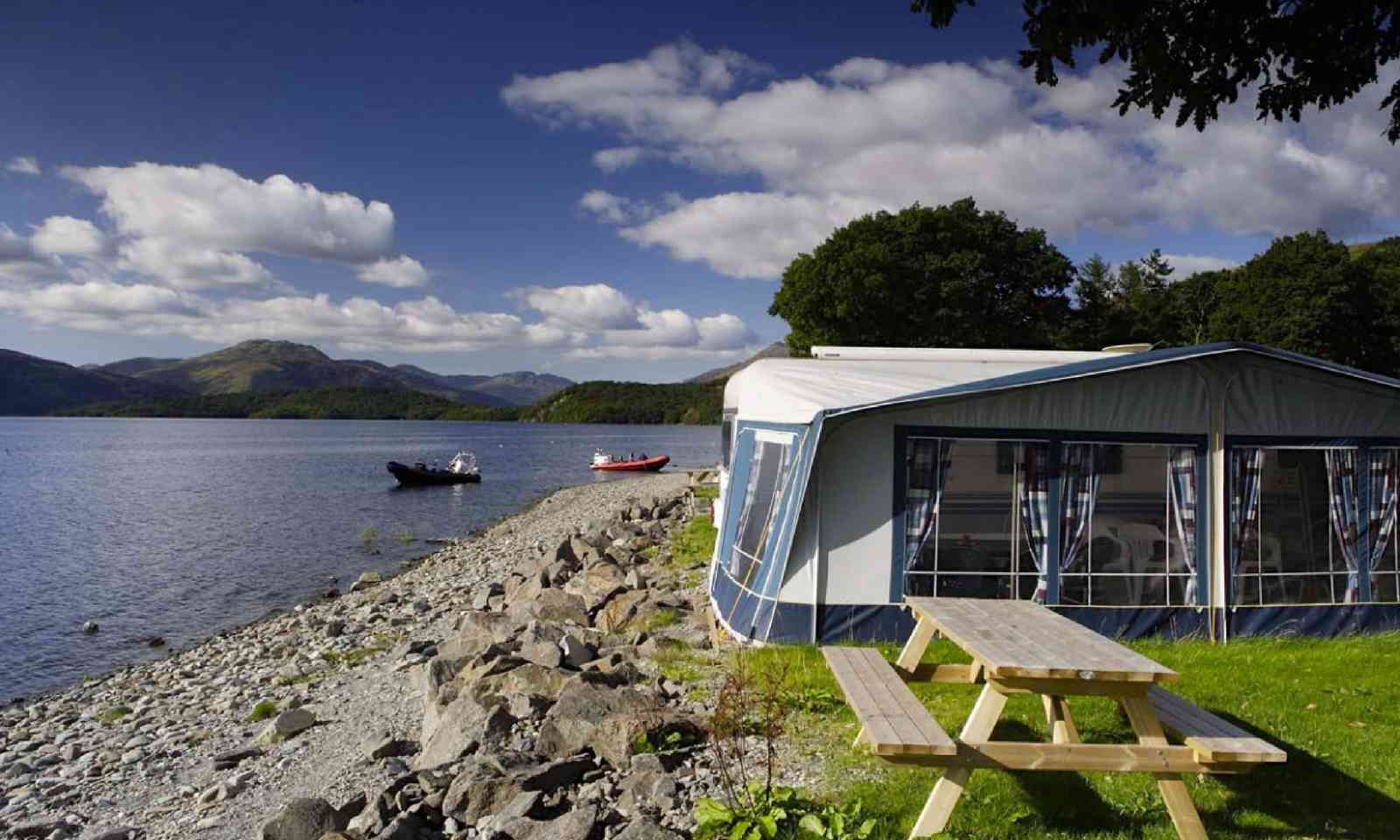 Before the Act of Union and the birth of the modern British state many Scots lived on crofts – smallholdings of land where communal living was the norm. In the heart of deepest Highland Perthshire, this ‘all-in-it-together’ ethic has been re-created at Comrie Croft.

Run by a co-operative of likeminded, environmentally aware individuals, this is no mere campsite. Yes they take tents, but they’ve also got Nordic katas, an onsite Tea Garden and a superb bike shop, the latter handy for exploring the network of trails that snake off up the Croft’s wooded hillside. 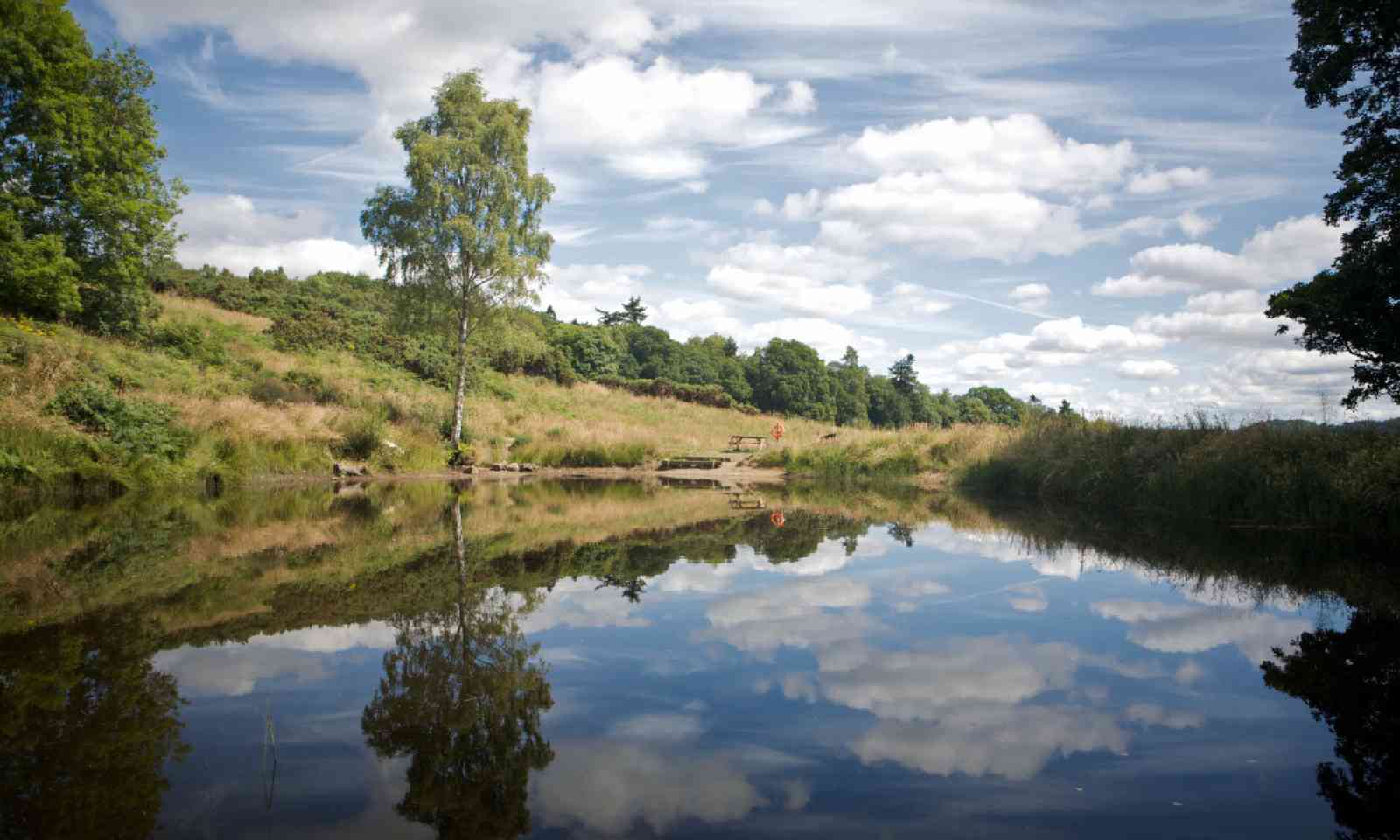 Knowing that Resipole is a place frequented by outdoorsy, active types, we sent members of the Cool Camping biking team to inspect the site. What they found was an unmistakable ‘activity aura’ enveloping the whole site, with canoes and sailing boats being hauled to and from the loch, and mountain bikers returning from a long day in the saddle in wonderfully filthy states.

For those whose concerns aren’t as focused on all things outdoors, the campsite’s cycle-friendly owners run the Resipole Studios, which provide a hefty heap of culture to balance out all that adventure. Here campers can not only check out the various summer exhibitions and buy art to stick on the walls back home, but they can even have a dabble at creating some artistic masterpieces of their own. 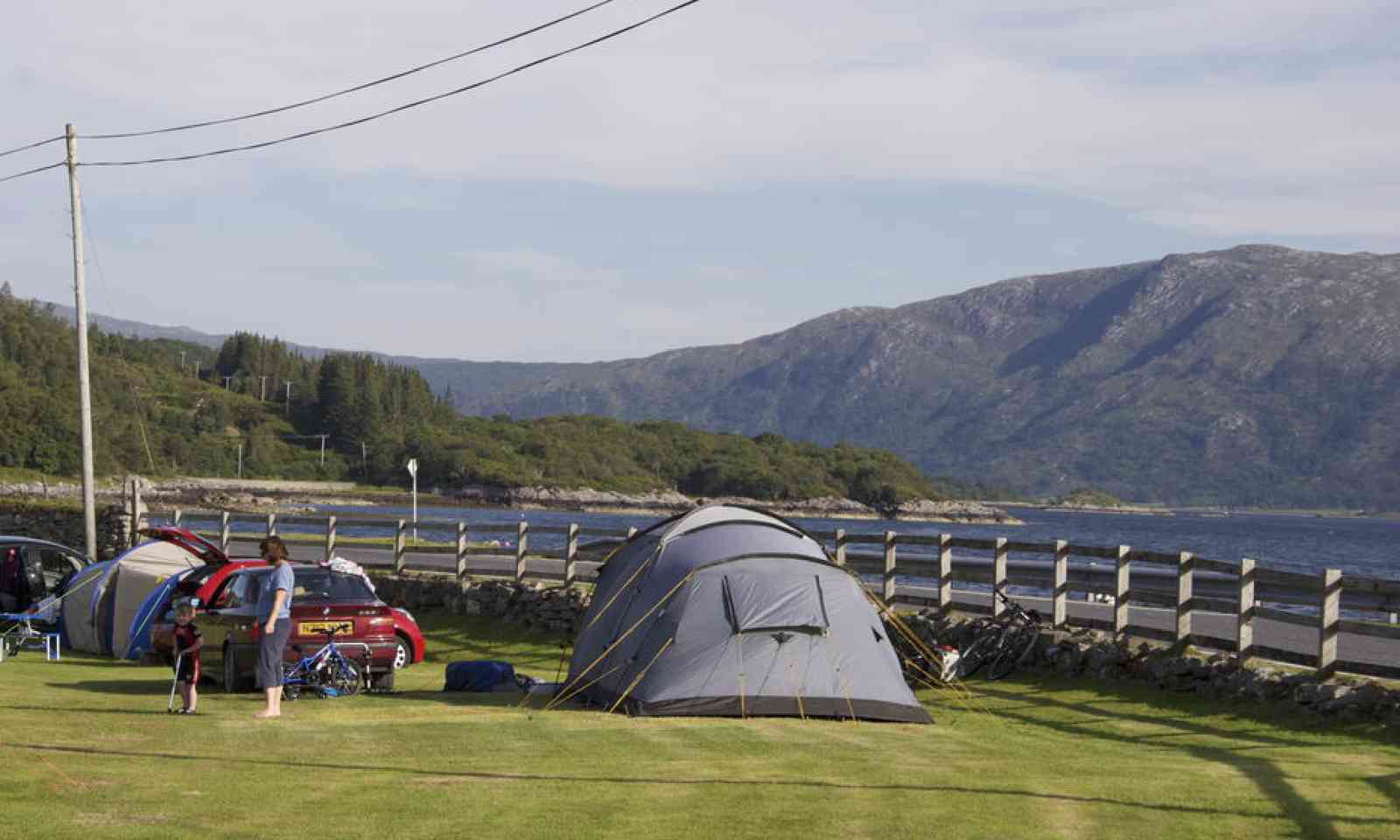 If you like trees – seriously like trees – then Rothiemurchus is the type of spot you might go to and never want to come back. It’s one of the best places in Scotland to enjoy swathes of indigenous Caledonian woodland, with a flurry of forests and wood-shrouded lochs, that has a real sense of being somewhere genuinely unspoiled and pristine.

The award-winning campsite is set within the boundaries of the Rothiemurchus Estate, which itself lies right on the edge of the remarkable Cairngorm Mountain massif. Babbling burns cut through the camp and make for a sublime experience; waking up on a bed of soft needles on a summer morning to the sound of rushing water and the smell of pine spiking the crisp air can’t be overstated. 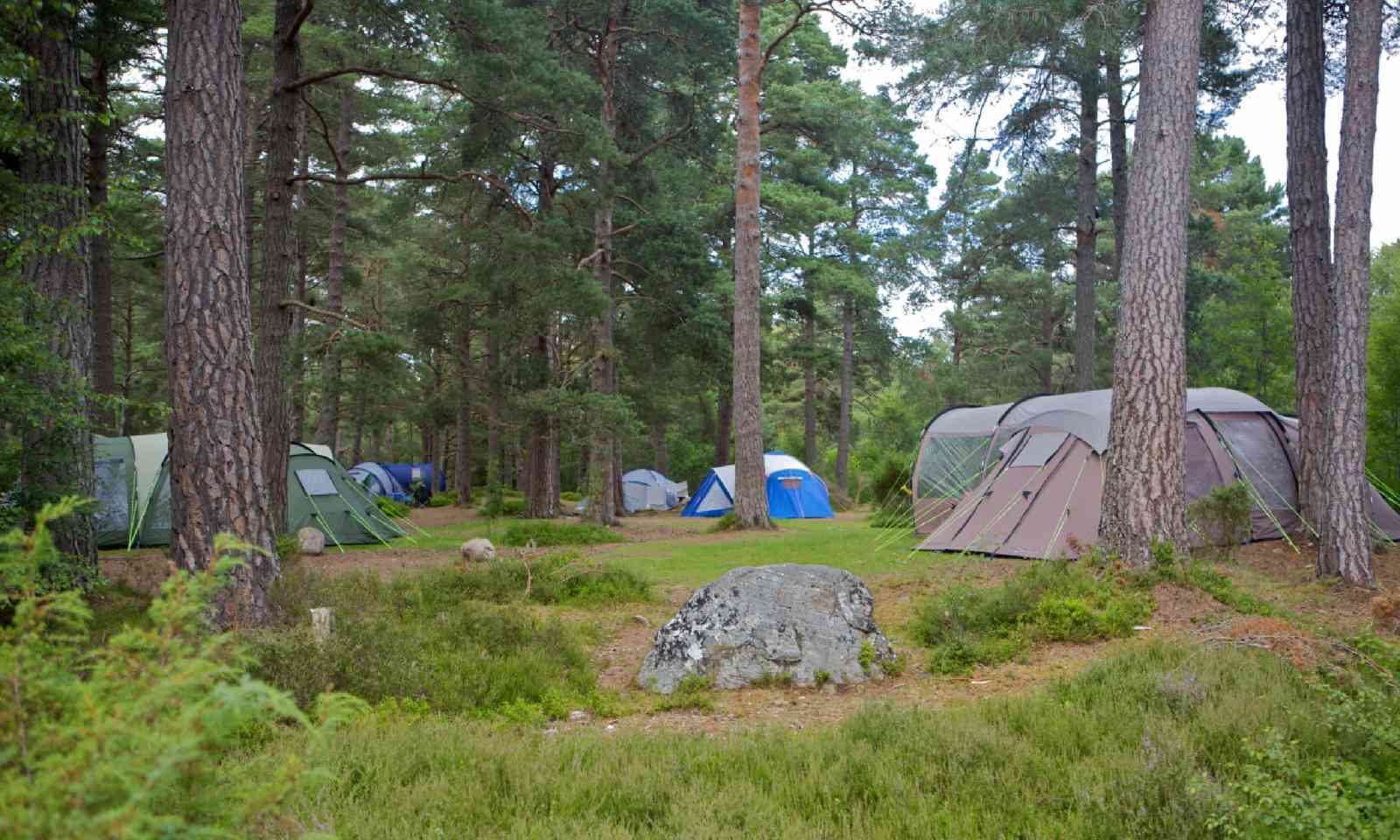 What's allowed Tents, tourers, motorhomes – yes. Dogs – no (except in tourers or motorhomes).
Amenities 22 woodland and riverside pitches for tents plus 17 hardstandings for tourers and motorhomes in a separate area. There’s a keycard-operated amenity block with hot showers, toilets, dish-washing area and laundry.

Sango Sands teeters on the northern edge of Britain in glorious fashion – and has a view out to infinity. Its unique north-facing location at the very top of Scotland means that in summer you can watch the sun both rise and set over the ocean. That is if you aren’t lying in your sleeping bag, exhausted from the outdoor adventuring that is compulsory in this wild and windswept corner of the land.

Durness may be remote but there’s a lot to do. A few miles west is the aptly named Cape Wrath, which you can visit by catching a ferry and then a minibus – there’s a lighthouse, the highest sea cliffs in Britain and a thrilling sense of freedom. Then you can return to your tent on its cliff-top eyrie and stay awake for that sunset. 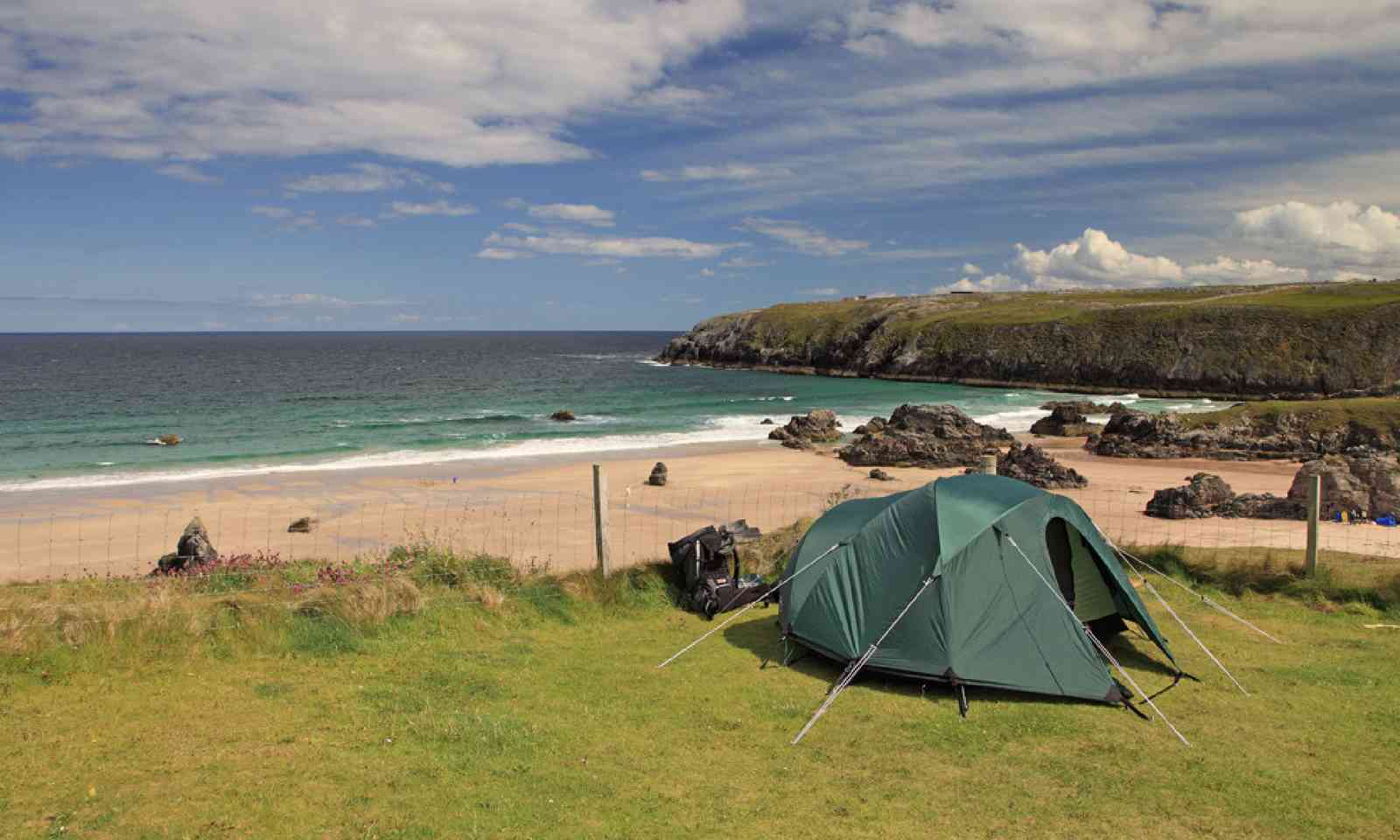 What's allowed Tents, campervans, caravans, groups, dogs – yes.
Amenities 120+ pitches, 64 hook-ups. 3 washblocks, 1 solely dedicated to showers. Waste disposal, dish-washing and laundry facilities. Fantastically, everyone has the use of a kitchen with free gas. Campers need to book if a hook-up is required. No campfires.


The 2nd edition of Cool Camping Britain is available from coolcamping.co.uk and priced at £16.95. All images courtesy Cool Camping.

Campervanning in Scotland - your guide

25 amazing things to do in wild Scotland