Uzbekistan on a plate: a cooking lesson in ancient Khiva

Uzbekistan has fantastic architecture and Silk Road history to discover, but Rebecca Collins discovers the best way to get to know the country is by cooking up a traditional feast

As the sun’s final rays danced on Khiva’s golden minarets and the call to prayer swept over the city, I was tying up my apron. “Stir it slowly,” said Timur, with a frown. “You can’t cook plov in a hurry. It will taste all wrong.”

We were making Uzbekistan’s national dish in the courtyard of Timur’s restaurant, in a huge blackened cauldron over a rudimental wood fire, and it seemed I had a lot to learn. 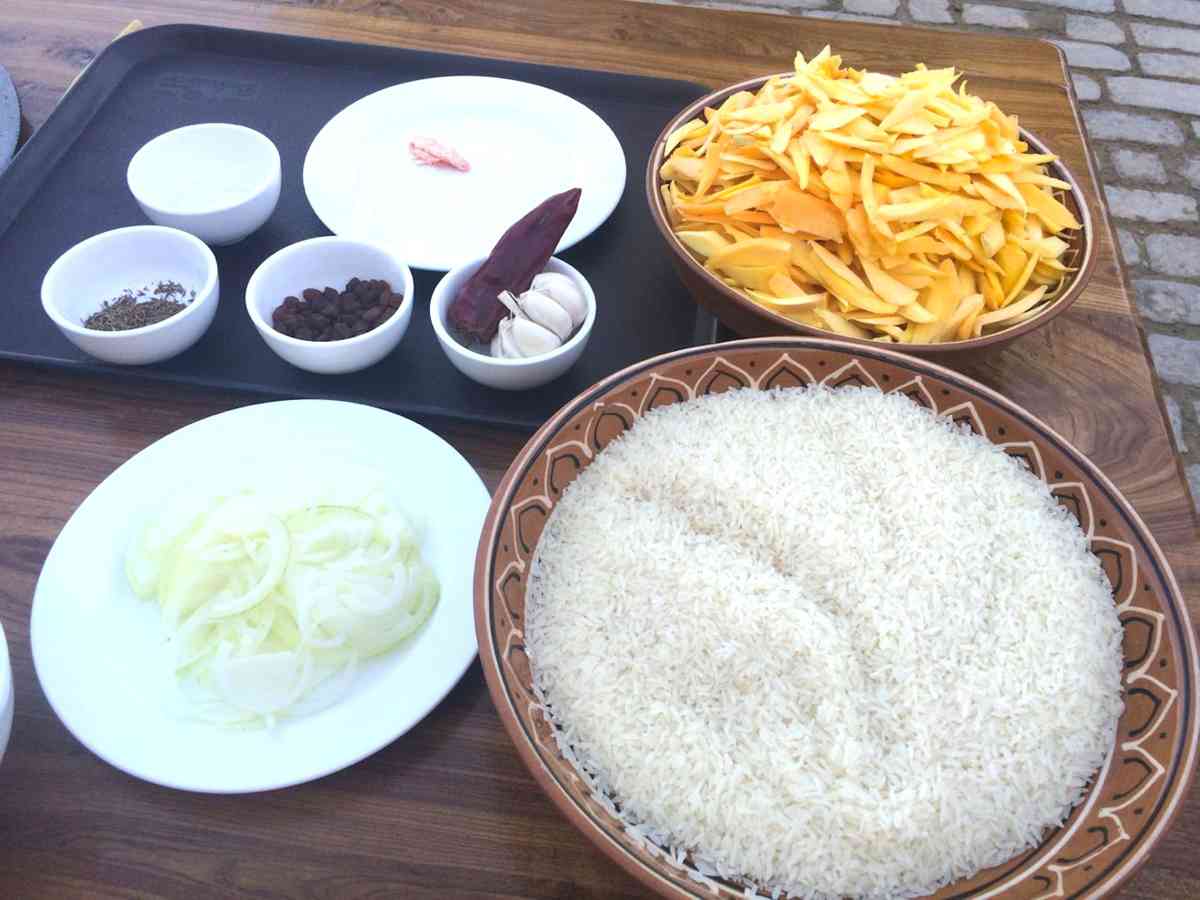 The mountain of lamb, onions, garlic and yellow carrots (sweeter than their orange counterparts) sweated over the amber flames. I could sympathise. It had been a sweltering day, and I’d been up since first light exploring the mosques and minarets of Khiva.

The city is a kind of living museum that’s been deftly restored back to the glory of its early Silk Road days. Up until the 1300s, it was an essential stop-off for the traders that plied this route through Central Asia, loaded with camels, coffee and silkworm cocoons.

Today, you can wander its maze of streets, ducking into palatial mausoleums and ornate mosques, all decorated with turquoise tilework that dazzles in the midday sun. It’s a bit like strolling through a 14th-century Disneyland – polished and clean, done up for visiting tourists – but it’s still a working city, with a proud local population.

I visit the Madrassah of Muhammad Rahim-Khan who was very well-educated and reformed the schooling system to include secular subjects, as well as religious ones. He built this particularly impressive school in the 1870s. 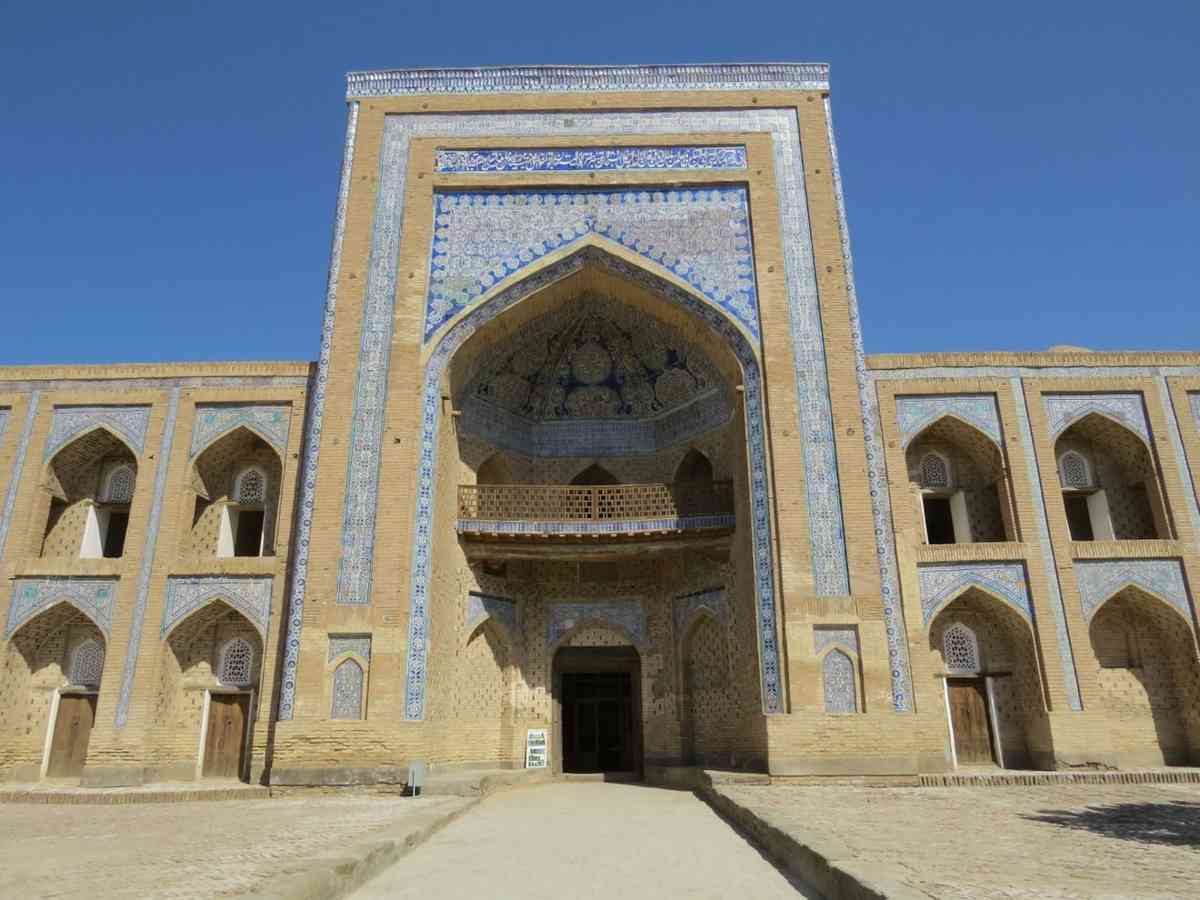 Khiva’s tourists tend to be Uzbeks that are keen to learn more about their national history, or visitors from neighbouring ‘Stans. I’d encountered lots of local wedding parties – the brides and grooms baking in big white dresses and tuxedoes – that were in town for family photo shoots. They were jolly bunches, roping us few Western tourists into their wedding photographs, and toasting the day with kuk-choy (green tea).

In Timur’s courtyard, just outside the city walls of Khiva, dinner was taking shape. He reached for a bag of rice and tipped the whole lot into the pot. Maybe he’d heard my stomach rumbling.

Plov is a dish of rice, flavoured with lamb, spices and vegetables. It’s comfort food at its best: simple, filling, and very tasty. Every area of Uzbekistan claims to have its own (superior) twist on the dish, so I was keen to taste Timur’s version.

“I learned to cook plov from my father,” said Timur as we watched the soupy mixture boil. “Normally, the women would cook, but for special occasions, like weddings or funerals, the men would cook the plov. I love making it. It is like meditation for me.”

We spoke about his family (“four brothers, two sisters”), the history of the restaurant building (“before the Bolsheviks came in the 1920s, it was the home of an advisor to the Khan”), and his hopes for his fledgling restaurant (“success”). 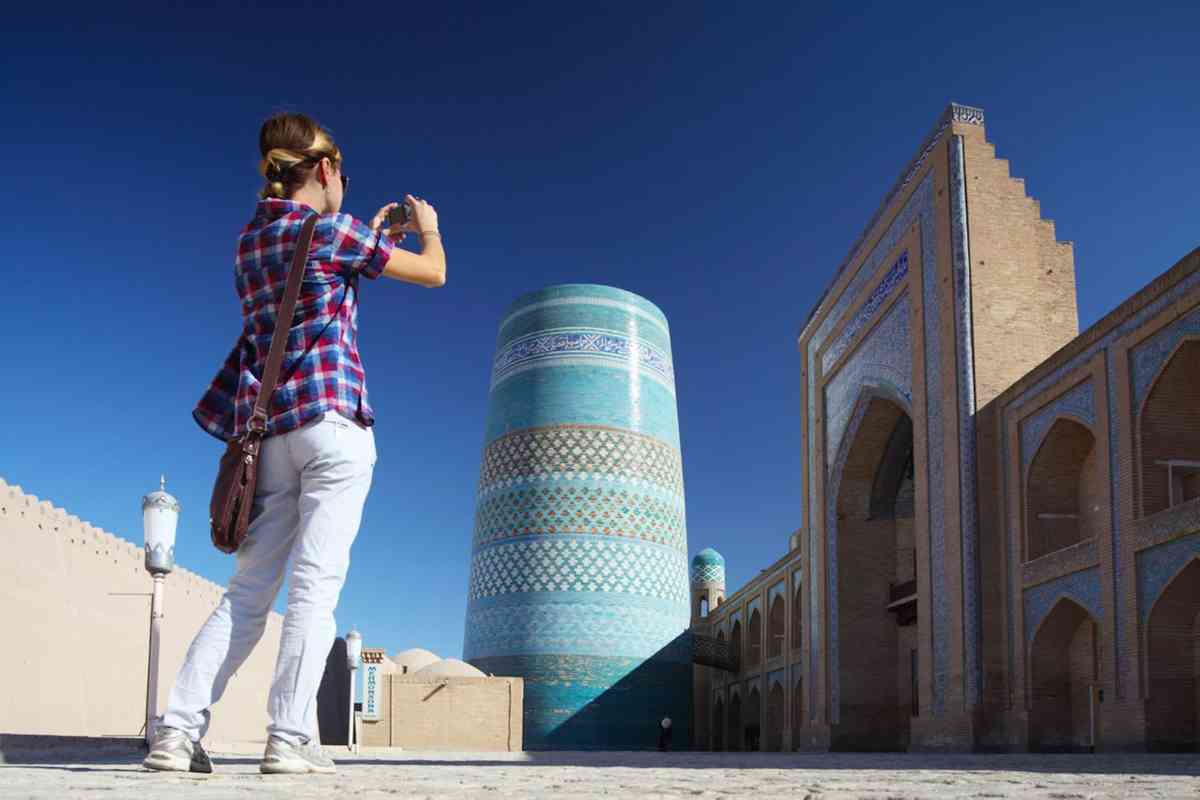 That success is coming, albeit slowly. “We have more visitors to Uzbekistan every year, but I think people get worried because of the –istan suffix,” confided Timur. “But, honestly, people should read. They should learn about a country before they dismiss it. Uzbekistan is very hospitable. Tolerance here is Number One.”

Not all of Timur’s patrons do the cooking. “Local tourists don’t want to wait for their food, so we cook it in advance, but Western visitors like to get involved,” Timur told me. It’s not everyday that you get to learn a recipe that has remained unchanged for centuries.

As the rice softened over the amber flames, Timur explained the significance of some of Uzbekistan’s favourite ingredients. “Pepper is a protection against the evil eye. That’s why you see it hanging everywhere. Pomegranate means knowledge, and the flat bread is decorated with patterns that are unique to every area. It is a work of art.”

After an hour of tending the pot, Timur declared our plov ready for serving. He piled it into a vast terracotta serving bowl and scattered warm, plump raisins on it. 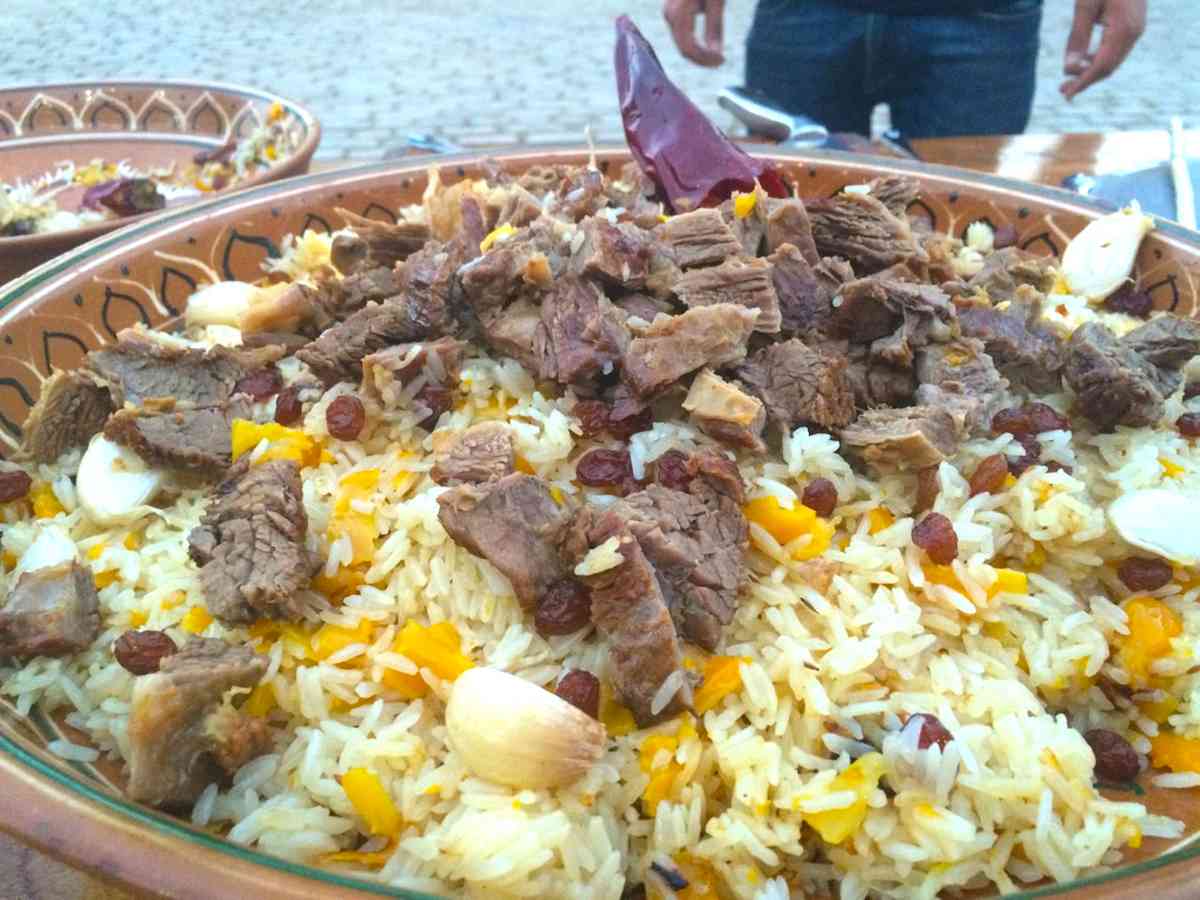 With a fork in one hand and a wodge of some of that crispy, patterned flatbread in the other, I scooped up a mouthful of steaming rice and lamb. It was succulent and satisfying, the kind of honest food that nourishes the tired body and frazzled soul. It’s not Michelin-starred cuisine, but that’s not the point. I could taste every ingredient, even a hint of smoke from the fire, and the sweetness of those raisins popped against the hearty, savoury flavours.

Did it taste any different from the other plovs I’d encountered? Not really. It would take a more sophisticated palette than mine to identify any nuances. But it did feel different. This wasn’t restaurant food, but was instead home cooking, simply done on an open fire with frosty beers and great company.

I’d spent the day exploring one of Uzbekistan’s most illustrious, incredible cities but I’d learned more over dinner than a guidebook or tour guide could ever impart. That, I’m sure you’ll agree, is as good excuse as any for a bowl of second helpings.

The author travelled on a Highlights of Uzbekistan trip with Explore. The small-group itinerary included sightseeing in the Silk Road cities of Khiva, Bukhara and Samarkand, as well as the modern capital Tashkent. See https://www.explore.co.uk/ or call 01252 884 272.