Linked by the San Juan Skyway, the key stops of this remarkable, mountainous region are as steeped in scenery, culture and adventure as they are little-visited by international visitors

The Colorado Rockies are what mountain dreams are made of. They stretch 611km across the entire length of the state and filled with jagged peaks (58 of them over 14,000 feet (4,267m) - or ‘fourteeners’ as the locals call them), ice blue alpine lakes and wildflower meadows roamed by elk, coyote and black bears. There is perhaps nowhere in the country where the USA’s rugged wilderness, that raw untampered spirit of the once-wild west, is more keenly felt than the San Juan Mountains. Considered by many to be the most beautiful and varied of the entire range, this south-western portion of the Rockies nonetheless only receives a fraction of the visitors that better-known, and easier-accessed, regions to the north get.

Better still, one single road will take you to all the key parts: the San Juan Skyway. Topping out at over 3,000 metres, it truly is a drive in the sky. Although it’s only 380km long and technically possible to cover in a day, if you spread it out over a week, the Skyway is one of the best, yet-rarely travelled, road trips in America, passing through frontier history, remote mountain towns, natural hot springs and some of the most dazzling scenery in the state. 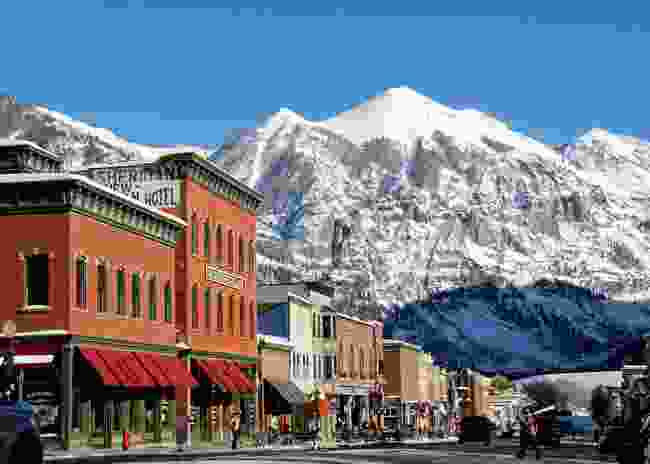 Nestled deep into a box canyon in the heart of the San Juans, Telluride is arguably the most beautiful mountain town in Colorado, with snow-dusted summits – including several fourteeners – framing the village. The options for outdoor adventure in its outskirts are vast, as you’d expect.

The real surprise is the cultural side of town: art galleries line the streets, the dining is on par with a city many times its size and some of the best festivals in the state happen throughout the summer: bluegrass, jazz, there’s even a hot air balloon festival where dozens soar above the aspen groves in a rainbow of colour.

Most loved, however, is the Telluride Blues and Brews festival, which happens every September. The three-day event brings together two of Colorado’s most famous exports: craft beer and the most spectacular concert backdrop that you’ll ever see. 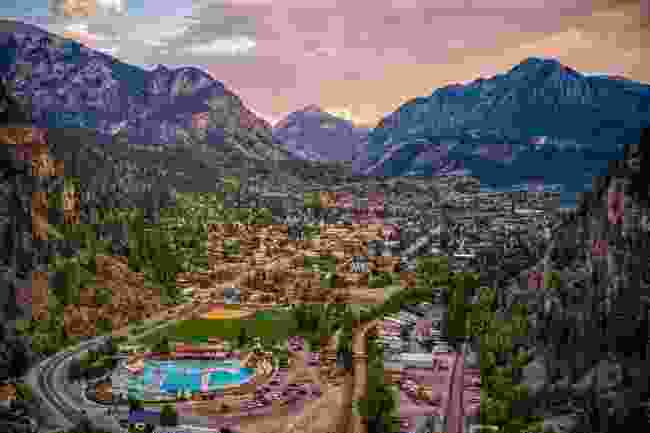 The Rockies encircle Ouray, with its Hot Springs Aquatic Center at the forefront (Shutterstock)

Known locally as the ‘Switzerland of America’ for its fairytale-esque scenery, Ouray, a former mining town, is deserving of another title too: the ‘Hot Springs Capital of Colorado’. Natural thermal springs flow abundantly throughout the Rockies (many of them linked by an excellent 1,150km road-trip called The Historic Hot Springs Loop). But of all the hot spring towns of Colorado, Ouray (pronounced ‘your-ay’) is the most unique. It’s named after Chief Ouray, of the Ute Indian Tribe, whose ancestors came to this valley for thousands of years to soak in what they called ‘sacred miracle waters’, often travelling many days to reach here.

The journey was worth it then and it still is today. Dozens of naturally heated thermal pools bubble up from the ground throughout town, from underground vapour caves to a huge outdoor hot springs complex. Perhaps best of all, and rare for the region, all of it is sulphur-free, and therefore odour-free too. Hike to waterfalls, get lost on some of the most-exciting 4x4 off-roading in the state... but it doesn’t matter: adventure on its own is one thing, adventure followed by a soak in miracle waters is something else altogether. 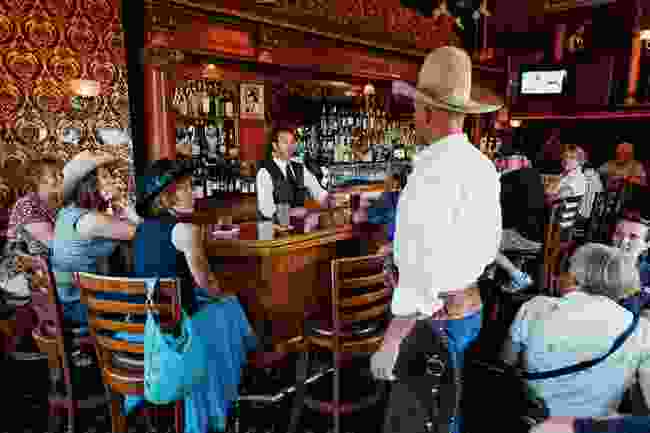 In the centre of downtown Durango, at the Diamond Belle Saloon, there is a bullet hole in the bar left over from a gunfight that took place here more than 100-years ago. It’s that kind of town.

Founded in 1880 by the Denver and Rio Grande Railroad as a basecamp for mining operations that went deeper in the silver and gold rich San Juans, this was about as wild as the West got. Miners would come down from months of hard work and isolation in the mountains and drink hard; more than one outlaw made his name on these streets.

“Back then there were 57 places to buy liquor,” Victoria Day, a local historian explains, “and one church. You do the math.”

Today, aside from the bullet holes and gunslingers, not much has changed from that point of view. Larger and more modern than the other stops on the Skyway, Durango’s wide array of restaurants and bars (it’s a college town too) mean that it’s still a place to have fun, and it doesn’t stop when the sun goes down either.

Its location, too, is second-to-none. Mesa Verde, one of America’s most treasured national parks, is a short drive away; the steam-powered Durango & Silverton Narrow Gauge Railway, one of the most beautiful train rides in the world, departs from here too.

Top things to do in the Colorado Rockies 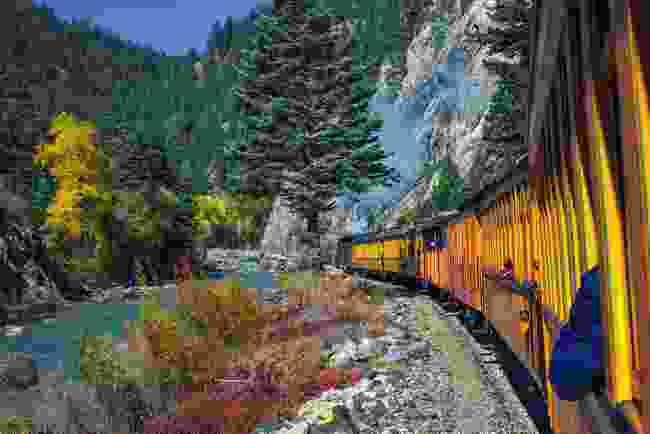 For 140 years, this 1882 steam train has been transporting passengers on the 72km route from Durango, taking them 900m up to the remote former mining town of Silverton. It is a journey to be savoured: hugging sheer cliffs and the rapids of the Animas River throughout. With its colourful western style building and saloons, Silverton feels more like the set of a John Wayne movie than a living town. But that’s its charm. Close your eyes, let your imagination wander and you can just about hear the clop of hooves and click of spurs galloping down the dusty dirt roads.

Just an hour’s drive from the northern tip of the San Juan Skyway is one of the USA’s least well-known but utterly awe-inspiring national parks. Dropping around 800m from its rim to the Gunnison River below, this razor-sharp gorge is every bit as grand as America’s more famous canyon, but receives less than 10% of its visitors. Take a cruise on the river and stay up late and watch the Milky Way unfurl (it is a designated Dark Sky Park), then wake up early to find the sunrise pinkening the canyon walls without another soul around.

This expanse of deep slot canyons and flat top mesas was home to the Ancestral Pueblo people. Between AD600-1300, generations of Puebloans carved entire villages with dozens of homes hewn directly into the sheer rock walls, high above the ground. It’s the USA’s largest and best-preserved example of Native American cliff-dwelling. If you’re fit and have a good head for heights, climb up to Balcony House. Looking out from its central courtyard, 182m above the ground, it’s easy to feel the presence of its original inhabitants, and easier still to marvel at the ingenuity and resourcefulness of a people that built castles out of cliffs in the middle of a barren desert.

Where to stay in the Colorado Rockies 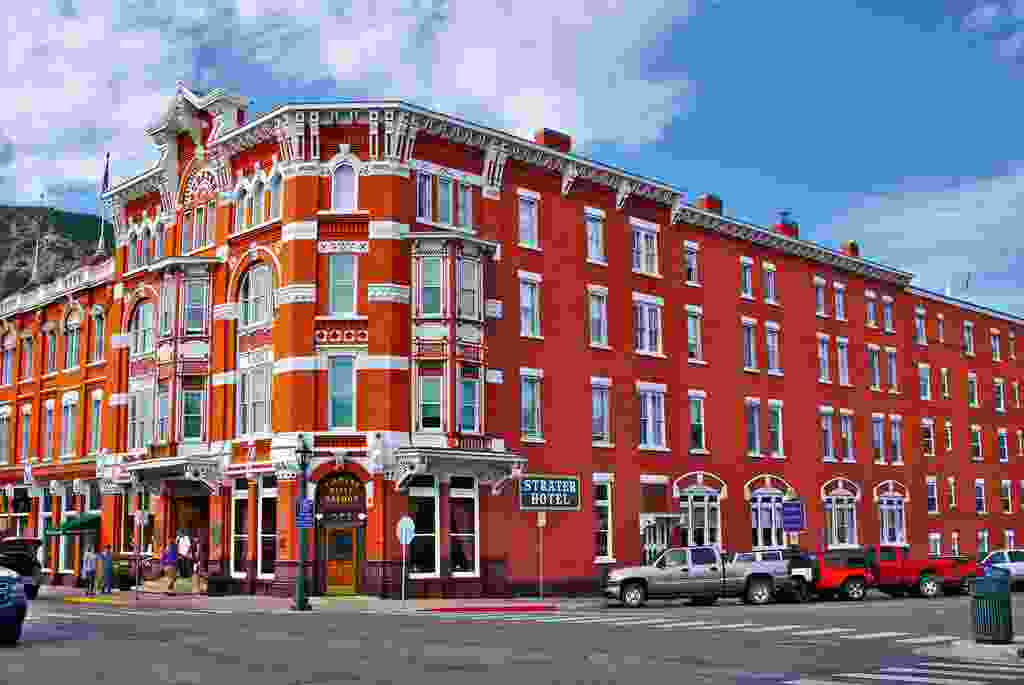 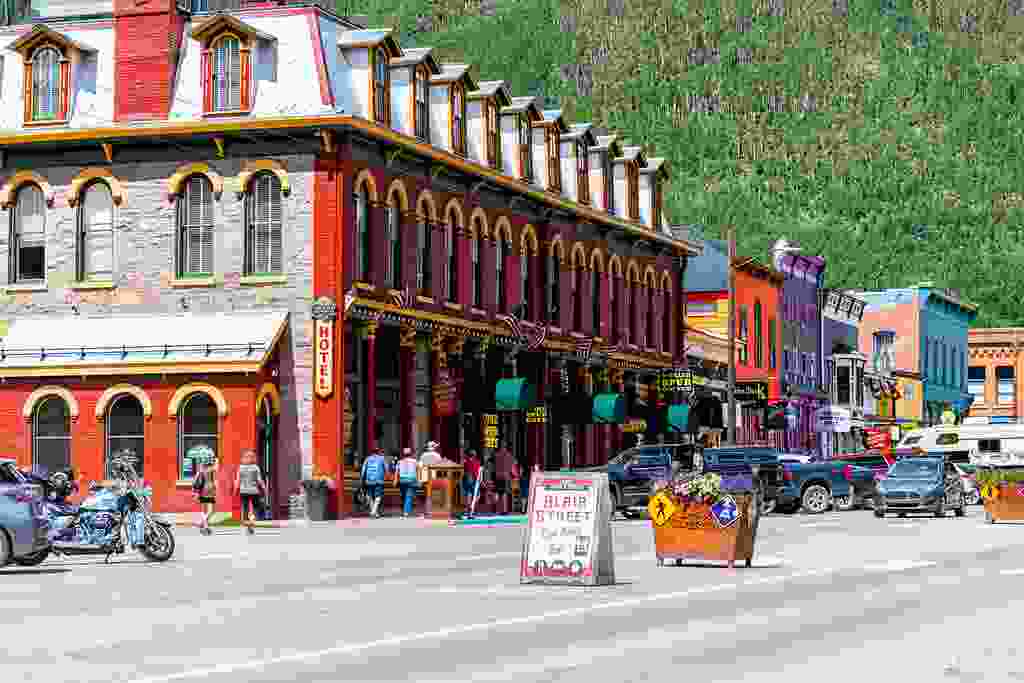 Inns Of The San Juan Skyway

Launched last year, this new initiative links together five historic inns in the five main mountain towns on the Skyway: Durango, Telluride, Ouray, Silverton, and Ridgeway. Available in bespoke packages, from all-inclusive tours to self-drive, with activity suggestions added along the route, these hand-picked inns are the most historic, interesting and inspiring places to stay along the Skyway.

Highlights include the Strater Hotel, in downtown Durango, the Beaumont Hotel, in Ouray, and the Grand Imperial Hotel, in Silverton, all of which have been welcoming guests since the late 1880s and still have many of their original antiques and furnishings – and rumour has it, a few former pioneer guests still floating around too.