Got two spare days of annual leave? Why not use them to climb North Africa's highest mountain over a long weekend? Andrew Mines did just that...

We set out on Thursday afternoon from Rabat on a train bound for Marrakech. My friend Jacob and I each carried a backpack, a small duffle bag, and the shared vision to climb the tallest peak in North Africa: Mt. Toubkal. At 4,167 metres, Toubkal towers over the High Atlas mountain range, situated about an hour’s ride from the city of Marrakech.

We disembarked at Marrakech late in the evening, joining the other travellers jostling to secure the first taxis outside the station. We negotiated a ride to Djemaa el-Fnaa, the main square in the old medina.

Our hosts at Rainbow Marrakesh hostel were friendly and happily spoke English with us. We had tea after dropping our bags, half planning for the upcoming climb, half tuning in to the other travellers lounging about telling stories. I soon fell asleep, dreaming only of the mountain looming quietly not far away. 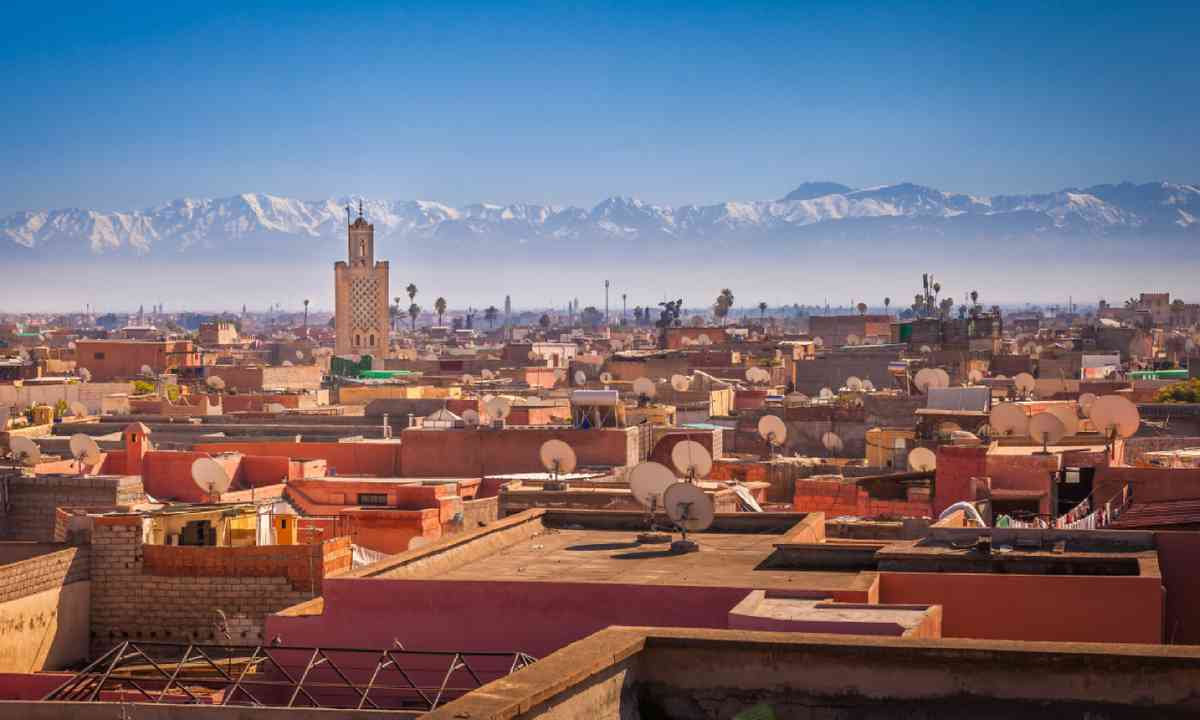 We left early on Friday morning, carrying only what we thought we would need for the mountain. The rest of our things stayed under the care of the hostel, to which we would return in two nights time.

We drove south under the mild winter morning sun. Outside my window the outskirts of Marrakech turned gradually to open lands that stretched flat for miles. Within an hour we were approaching the foot of the Atlas and left the comfortable, straight highway behind, exchanging it for the meandering path of the mountain.

Our driver was clearly experienced in this route, knowing precisely when to slow down, when to move over, and when to swerve violently to avoid the occasional tour bus – all at the fastest speed possible. Thankfully, we didn't have to endure more than half an hour of this, but to his credit I was wide awake by the time we reached Imlil, our final stop. 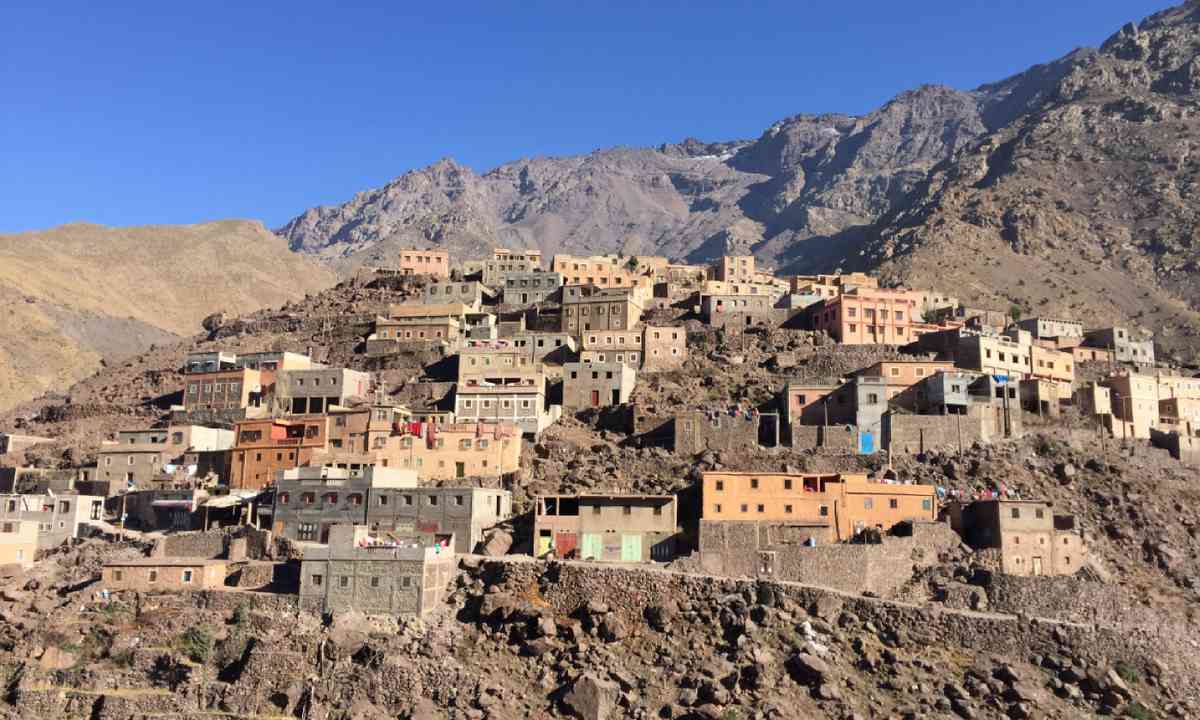 The village of Imlil lies 1,740 metres above sea level, and serves as the launching point for many Toubkal expeditions. Small homes line the hills and narrow valleys along the river. Walnut, apple, and cherry trees that, come springtime, would fill the region with rich colors and smells were stripped bare by the winter days. The streets carried the faint cries of many chickens, goats, and mules.

Before setting out we stocked up on snacks: nuts, dried fruit, extra water, and as many Snickers bars as we could fit in our bags. A local guide told us most hikers completed the journey up to the refuge in six hours. Of course, our goal then became to finish in as far under six hours as possible. Jacob’s idea, not mine. 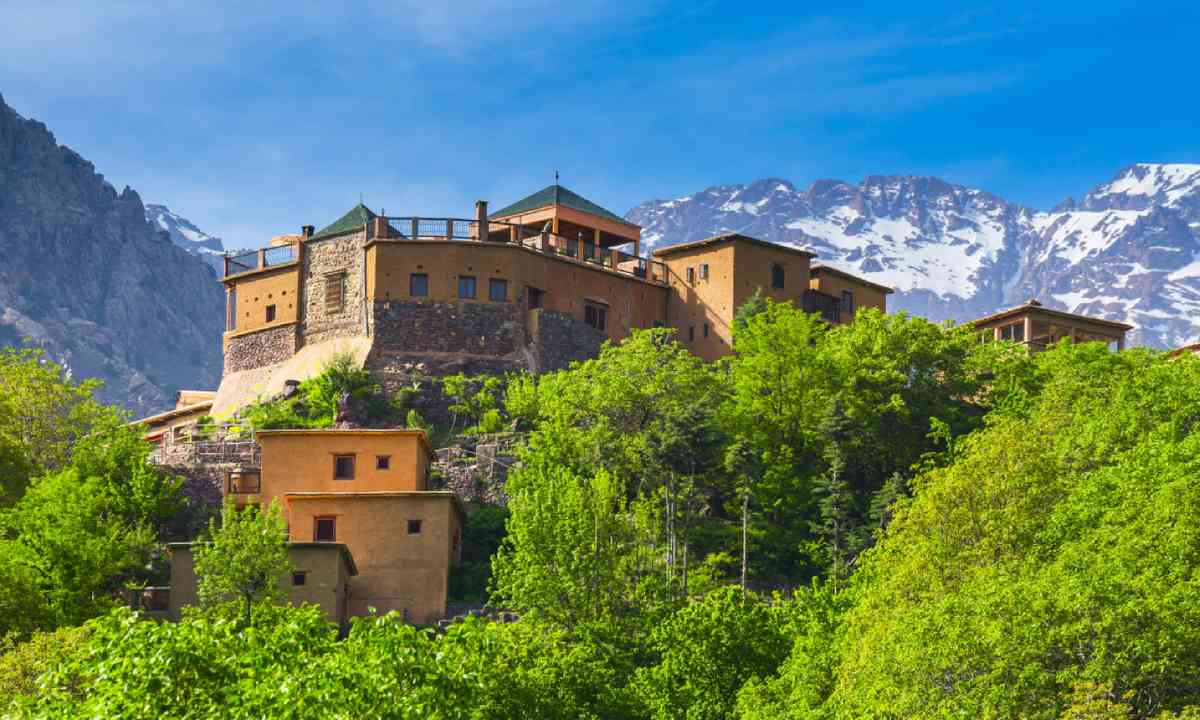 It was not until half an hour of walking had passed that we felt truly on our way up, the village far behind us. The hike to the refuge is mostly a gradual ascent interrupted by some flat sections and the rare steep tract. There are a few huts along the path and, more notably, the small settlement of Sidi Chamharouch in which the tired climber can stop for a drink or meal. Content with our snacks, we pushed on.

Several times we passed mules carrying a bizarre assortment of goods; one carried a box of Bose speakers, another hauled propane tanks, and yet another had a sac draped over its back in which a full-sized sheep was getting a free ride down. Never judge a mule by its cargo. 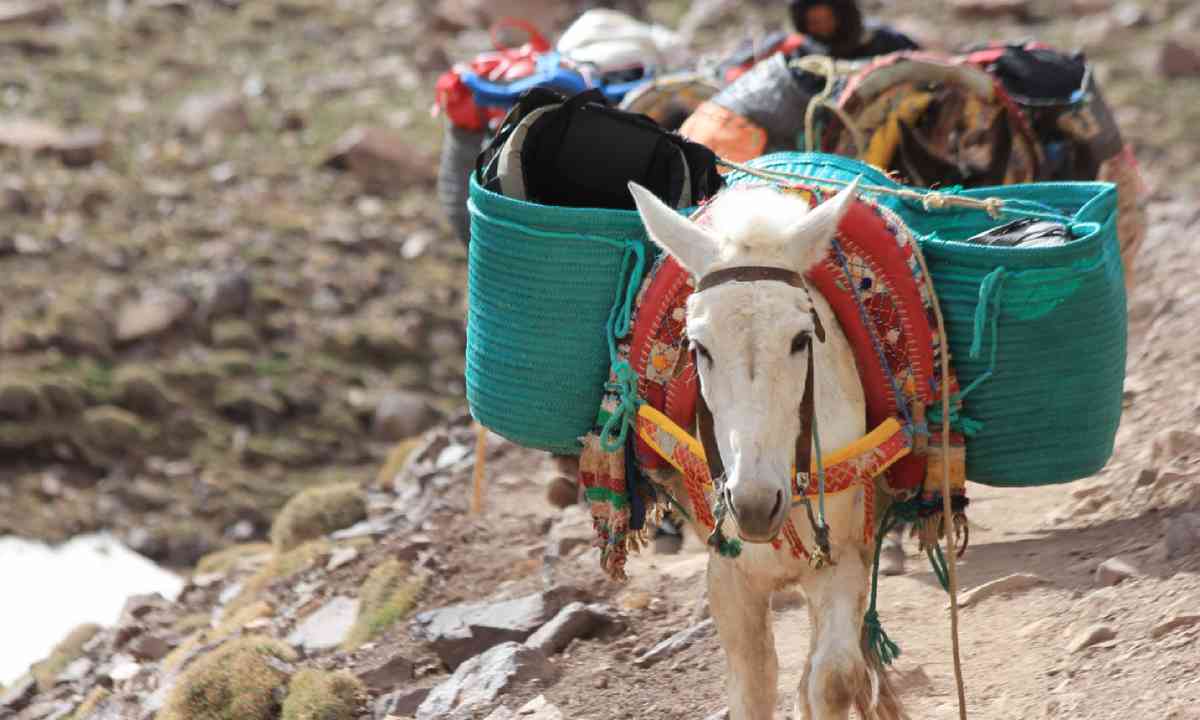 Mule in the Atlas mountains (Shutterstock)

We crossed hikers from a number of different countries during our ascent. We exchanged a “Salaam” with those coming down, who offered us a cheery reply, while those we passed going up nodded grudgingly at being overtaken. This melee included a trio of Scotsmen, four Germans, a Finnish couple, a group of Russians, a few Americans like ourselves, and lots of Moroccans.

The mountain itself was mostly rocky terrain. The river flowing through the valley below was little more than a stream due to the unusual lack of rain and snowfall this season, but we could still hear it trickling down towards Imlil. During our rests, I took the time to appreciate this rugged beauty. The temperature hovered around 13°C, so my boots, light trousers, long-sleeve shirt, and shades were plenty of protection. 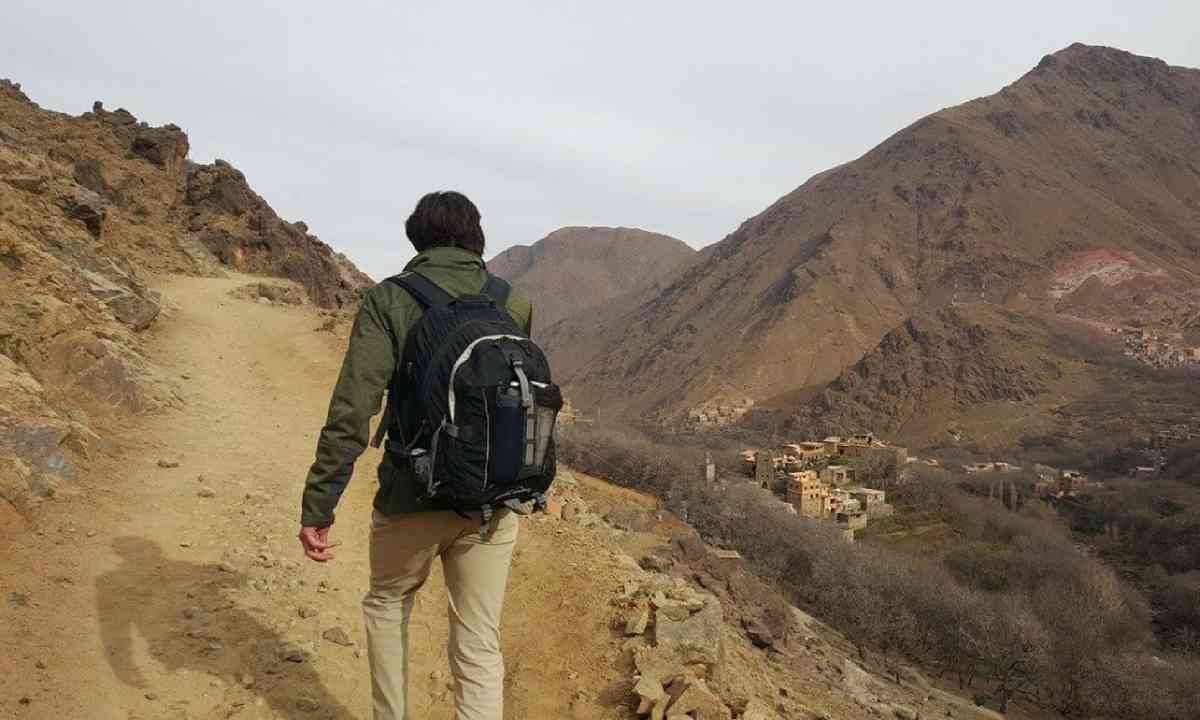 Hiking in the foothills (Andrew Milne)

By mid-afternoon, less than four hours after leaving Imlil, we arrived at the refuge. A simple stone structure, Réfuge de Toubkal provides the only protection from the night’s sub-zero temperatures and harsh winds, the exception being a collection of feeble tents pitched nearby. With the sun still up to offer us some warmth, we had tea on the terrace overlooking the valley and snacked on our nuts and dried fruit, careful to ration some for later.

One of the rooms was heated to a glorious 20°C by a wood fire, the only one of its kind in the refuge, so we had dinner there. We quickly worked our way through a traditional Moroccan tagine with chicken, an exceptional meal to recover our strength for the second leg. Also dining were four British men in their late twenties who had been climbing various peaks during the last two days, the refuge keepers, and two Canadian women who had summited earlier that afternoon. 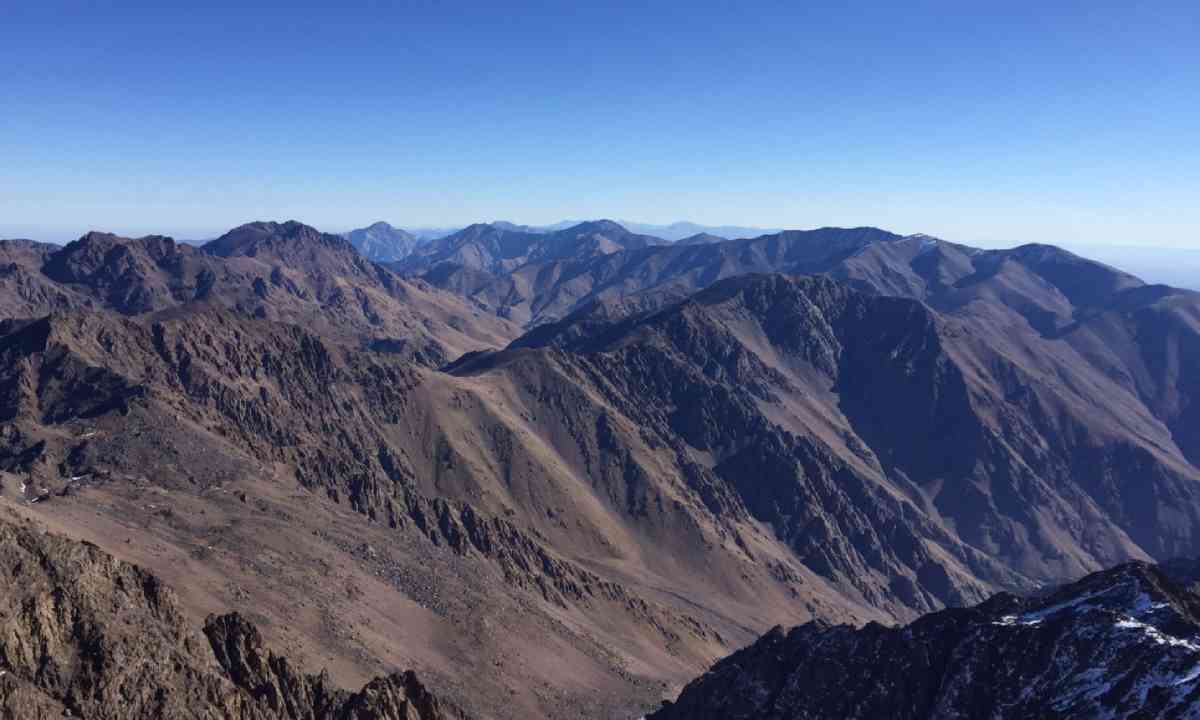 After dinner we read and played chess on a makeshift board provided by our hosts. I lasted a couple of hours before reluctantly retiring to the bitterly cold bedrooms upstairs. I was much in need of sleep. Both Jacob and I wore most of the clothes we had brought with us, though he had the luxurious addition of his hat, for which I envied him. Regardless, we were in for a cold night. Did Andrew and Jacob reach the summit over the weekend? What advice would they offer other climbers? Find out in part two...

This editorial is supplied by our partners at muchmorocco.com