Cinque Terre highlights - and the best alternative places to visit

Where should you go once you've soaked up the multi-coloured magic of the Italian Riviera's uber-popular Cinque Terre? We reveal the must-see alternative villages, towns and coastal resorts to explore...

It would be hard not to fall for the Cinque Terre: five impossibly bright, orange-hued villages built atop coastal cliffs, and surrounded by deep green-blue sea.

OK, so you’re not exactly off-the-beaten-path on this one. The Cinque Terre is extremely popular with visitors. But there’s a reason why people flock to the Ligurian coast of Italy exclusively to board a boat and set eyes on the fab five.

So, don't skip them just because they're busy. Easily accessible by train (connecting all five villages with Pisa, Genoa and even Rome), it is possible to see the Cinque Terre over just a day or two and then veer off the well-trodden trail for a few under-the-radar visits, too.

Click here for what not to miss from each village, or skip ahead to see where to go to avoid the crowds.

Here are the Cinque Terre's must-sees and must-dos, and the best alternatives... 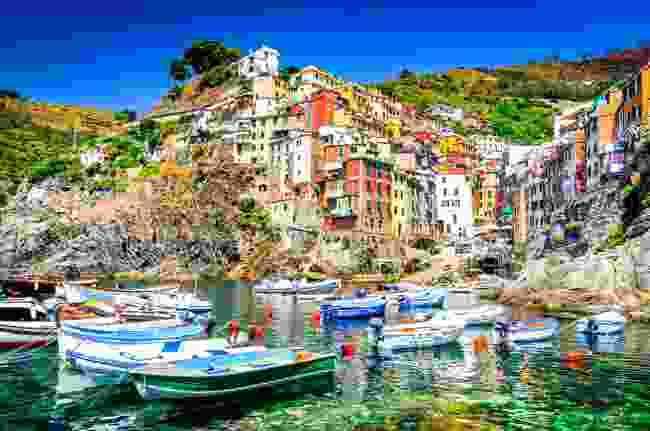 Riomaggiore is just as pretty in real life as it is in pictures, with red, yellow, pink and orange buildings seemingly stacked on top of the rocky coastal cliff. A living postcard. 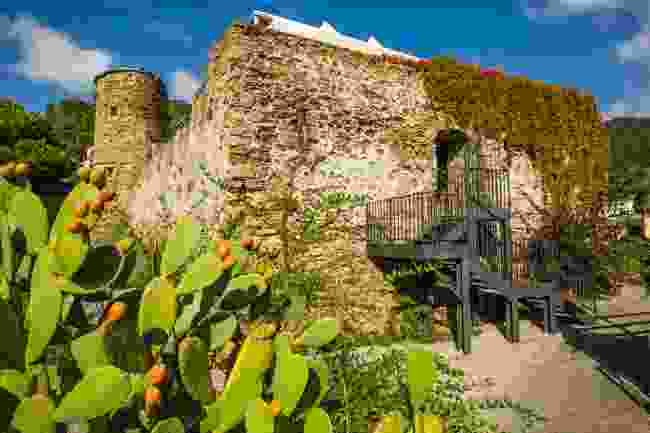 Highlights: the seaside Castle of Riomaggiore, a UNESCO-listed World Heritage Site built during the 13th century, when Genoa was a republic, to strengthen its defences.

The church of St John the Baptist, nearby, is also a must-see for visitors. Built in 1360 and renovated in the 1800s, it retains some of its original design. It’s not too far from the castle, either, which is accessible via the courtyard. 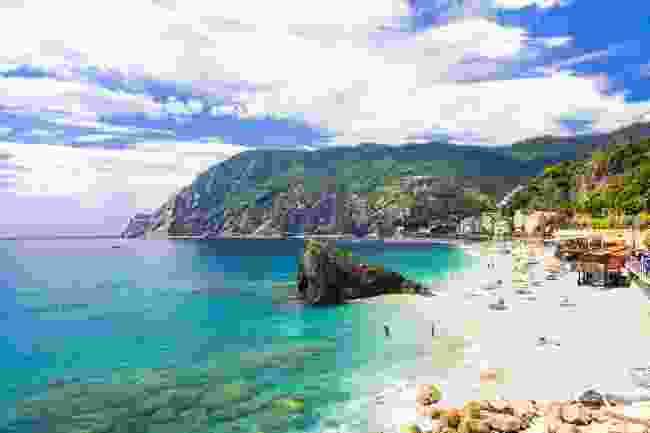 Arguably the least rainbow-coloured of the five villages, and the oldest, Monterosso shouldn’t be overlooked. It’s split into a new town and old town. Both are worth a wander. 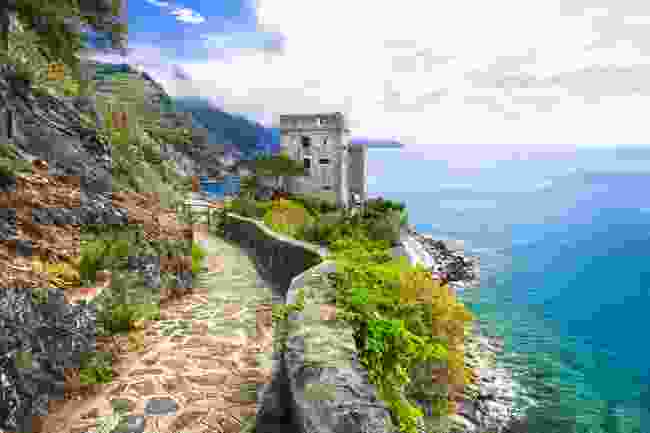 Highlights: Monterosso boasts a sprawling, sandy beach – the only one in the Cinque Terre. It’s also the ideal place to get walking – whether you’re after a leisurely stroll along coastal cliffs, or are visiting all five villages on foot.

One of the Liguria region's many culinary specialities is seafood, and Monterosso has plenty of it. Expect only the freshest and most delicious from its many restaurants, and be surprised by the many, many different ways you can sample the acquired taste of anchovies. L’Ancora della Tortuga is the best place to start, or see if the much-loved Ristorante Miky lives up to the hype. 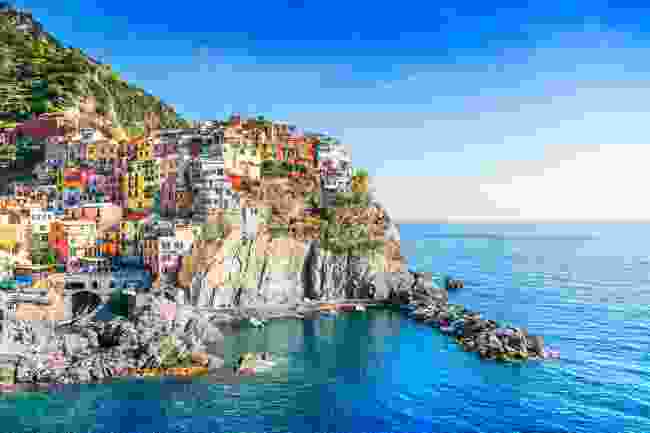 The second smallest of the five villages, Manarola has a lot going for it: stunning views, delicious dessert wine, a name that rolls off the tongue. It’s also one of the most popular spots for visitors.

Highlights: Explore its rocky harbor, and take in the views. Often, Manarola’s said to be the ‘second most attractive’ of the five villages. 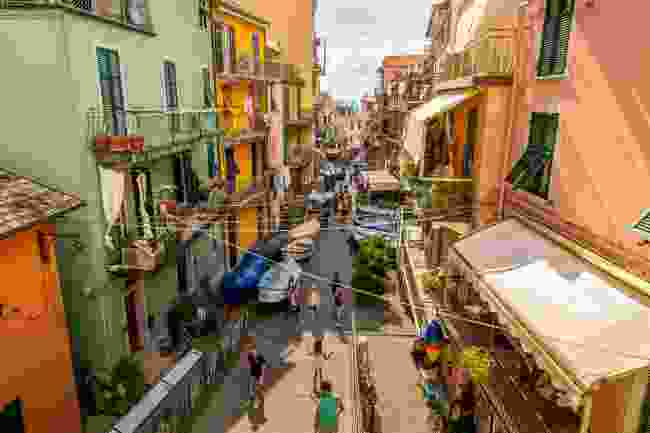 A street in the fishing village of Manarola, Cinque Terre, Italy (Shutterstock)

Sip on sciacchetrà wine after taking in the views. It’s so sweet; it’d almost be rude not to. The village is the Cinque Terre destination for vino - it's home to a wine co-operative, over 300 grapevines, and La Donna dell'Uva, a pretty bronze statue of a woman clutching bunches of grapes to her body.

Finally, go for a (sober) stroll. The famed coastal trail Via dell’Amore connects Manarola to Riomaggiore, and is an excellent walk overlooking the sea. A must-do, if you’ve opted to traverse the Terre on foot, instead of by train. 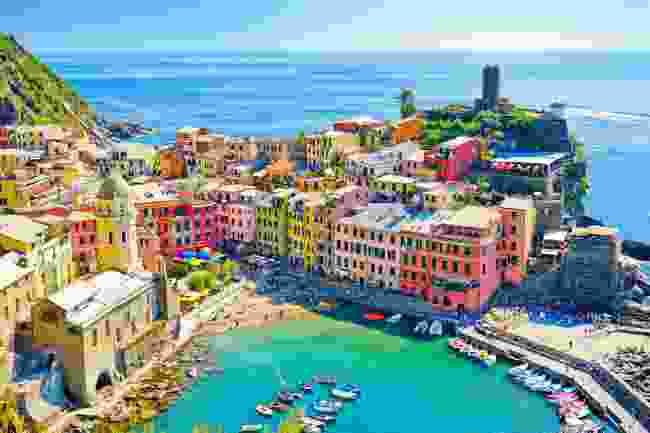 Vernazza is impossibly beautiful, surely designed for the sole purpose of getting your camera out. It was made for super saturated shots of brightly-painted buildings against the natural colours of the hills and water.

Highlights: In Vernazza’s centre, you’ll find the medieval clock tower, suspiciously pale on the skyline, and shaped like an octagon. 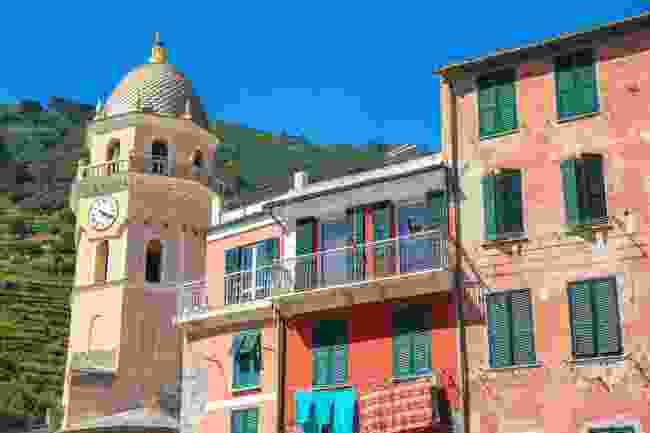 There’s also Doria Castle, which was thought to be built in the year 1000. Little exists of the castle bar its cylindrical tower, though there are always impressive views if you make the journey to see it.

Between Corniglia and Vernazza is Guvano Beach, a ‘hidden gem’ of sorts where the amount of clothing (or complete lack of) is totally up to you. It’s not the easiest to find, so plan your visit carefully. 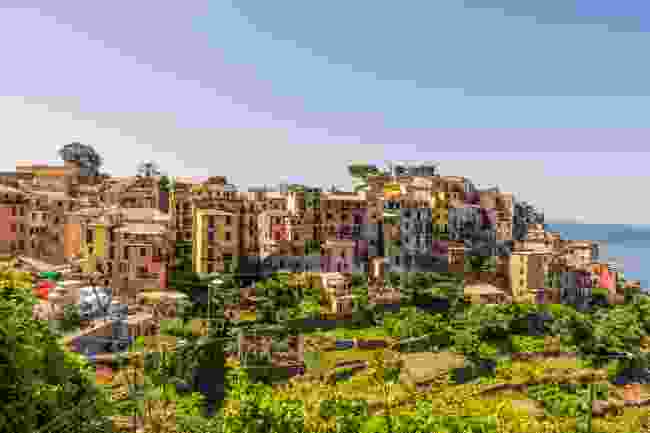 Stunning Corniglia is the smallest of the five, and is nestled between its neighbours, making it the ‘middle town’ of the Cinque Terre. Perhaps it’s a little more challenging than its counterparts… if the shuttle bus from the train station to get you there doesn’t show up. 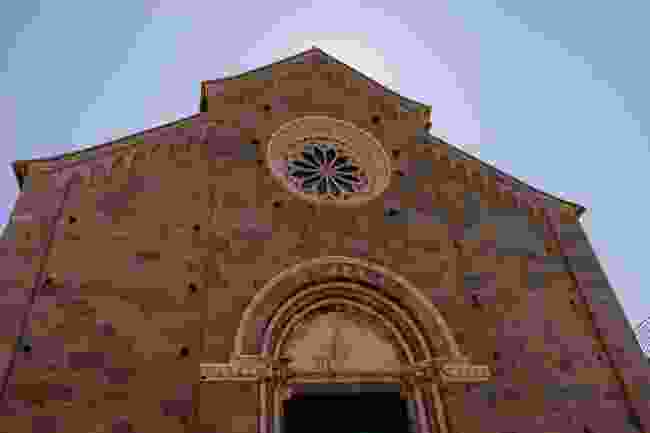 Highlights: Hardcore hiking enthusiasts will likely appreciate Corniglia’s steepness. Hills, hills, as far as the eye can see. Even getting to Corniglia usually involves a 381-step climb up Scalinata Lardarina staircase. The views from the top, however, are pristine, so worth it, if you’re able.

It’s also a good starting point for an excellent walking route to Manarola via the tiny village of Volastra. Once you’re on flatter ground, the town’s main square is home to the San Pietro monument, aka the Church of St Peter - Corniglia’s patron saint.

The best alternative destinations to explore... 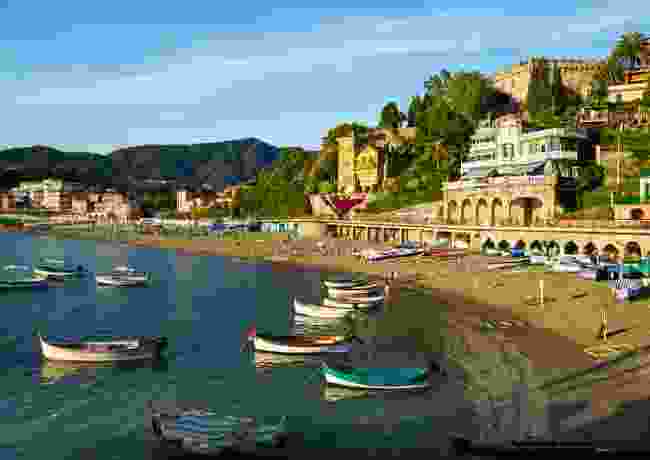 The beach at Levanto, Italy (Dreamstime)

The resort of Levanto is separated from the Cinque Terre by the breathtaking Cape of Mesco. It’s known for its impressive views, the lush, green hills, and an abundance of olive trees.

The town – and the entire coastline - looks perfectly picturesque in the panorama view from the cape. Once you’re in the town has plenty of gothic churches, historical monasteries and castles in its midst.

Getting there: Levanto is a stone’s throw from Monterosso, and very easily accessible by the same trains you'll use to get between villages. It’s an ideal starting point if you’re walking the coast, or to stay if you’re looking to spend time exploring the Cinque Terre, but want to steer clear of too many crowds, and tourist-level prices. 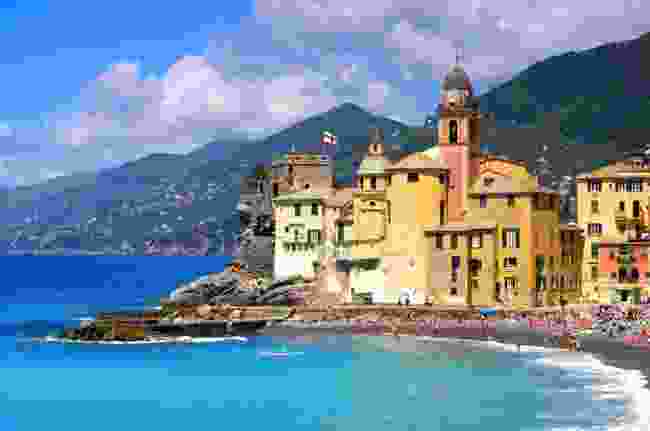 The gorgeous coastline of Camogli, in La Spezia, Italy (Shutterstock)

A riveria town with a strong fishing background, Camogli has yet to reach the dizzying heights of popularity as its neighbour Portofino, or the Cinque Terre.

Yet it is pleasingly close to both, and full of surprises: lovely waterfront restaurants selling fresh fish dishes, the bronze Christ of the Abyss statue submerged below the sea, the sparkling interiors of the basilica Santa Maria Assunta, and the cliffside Castle della Dragonara.

Getting there: From the Cinque Terre, Camogli is an hour and 16 minutes by car, and takes less than an hour from Monterosso by direct train. 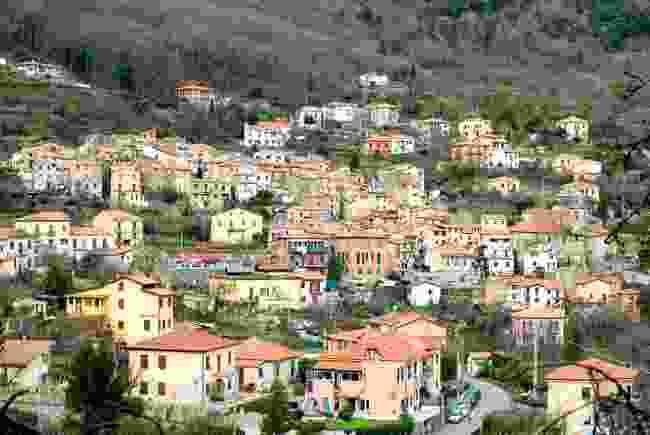 Another side of village life, not a million miles away from Vernazza and company. Biassa is home to approximately 650 residents, and there's not a single eye-popping orange paint job in sight.

Near the city of La Spezia, it’s worth dropping by Biassa for a glimpse of the gorgeous countryside, and a quick stop to see remnants of the fortress Rocca Di Coderone.

Getting there: 20 minutes from Monterosso to la Spezia via train, followed by a bus talking around half an hour. Alternatively, travelling from the Cinque Terre to Biassa by car will take roughly 55 minutes. 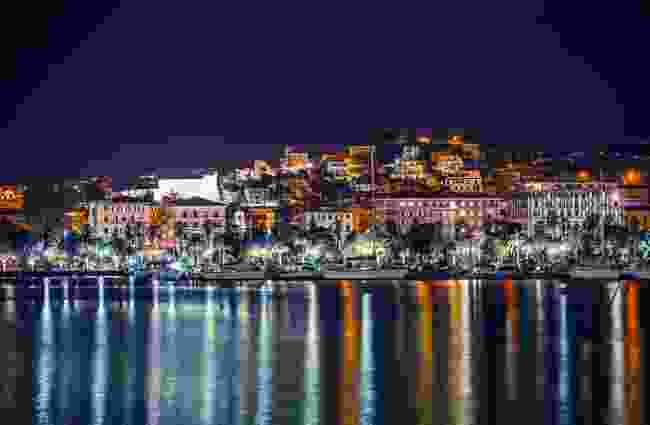 The port city of La Spezia is known for its stunning waterfront, rammed with boats and decorated with several-storey white, yellow and orange buildings. It’s particularly lovely at night, but there’s plenty to see during the day.

A visit to the Technical Naval Museum is essential for anyone with a genuine interest in ships and maritime history, as is the archaeological museum hidden within St George’s Castle in La Spezia’s high hills.

Getting there: La Spezia is an easy 25 minutes by train. You can reach each of the Cinque Terre villages (and neighbouring Levanto) by train regularly throughout the day. 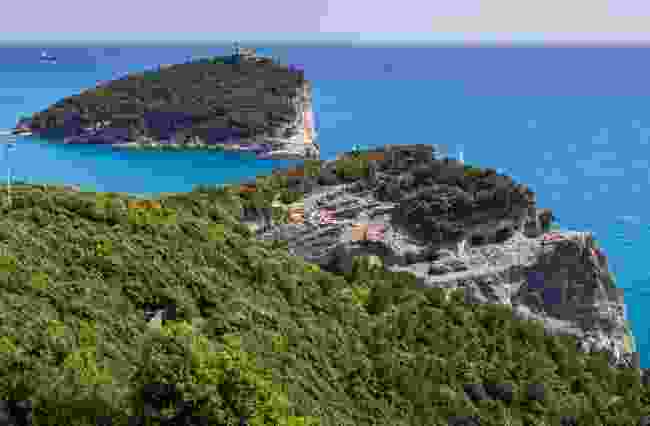 The islands of Palmaria and Tino, off the Porto Venere coast, Italy (Shutterstock)

Palmaria is the largest of three islands just off Porto Venere in the Ligurian Sea. If you’re looking for fewer crowds, sun-sprinkled hikes, peaceful pebble beaches and nature left unchallenged, Palmaria might be for you.

The port town of Porto Venere is just a short ferry ride away, if you want to extend your visit. The neighbouring island of Tino, and the wildlife park, Parco Naturale Regionale di Porto Venere, are also worth a gander.

Getting there: A popular seven and a half mile walking route takes five hours, and begins in Riomaggiore. It’s a pretty straightforward walk, and the path isn’t a million miles from the sea, so you’re guaranteed some stellar views along the way.

From Porto Venere, take the regular five-euro city ferry to Palmaria. Train travellers can get on at Monterosso, and change at Garibaldi station for a bus to Porto Venere, taking just under an hour. The colourful homes of Portofino, near Genoa, Italy (Shutterstock)

Portofino has the same visual appeal as the Cinque Terre – a fishing village on the Italian Riviera, known for pretty pink, bold red and pale yellow houses. The water is turquoise, the bushy hills in the background a lively green.

There are also high-end shopping opps, a friendly town square near the harbour, and plenty of seafood restaurants to get stuck into (La Cantina is a particular highlight). Like Camogli, it’s also very close to the Christ of the Abyss statue living under water – and if you’re keen on diving, Portofino’s the place to take on a lesson.

Getting there: Portofino trains running to Pisa stop at Monterosso and the rest of the Cinque Terre, taking approx. 50 minutes. As Portofino is super close to Camogli, make sure you see both before landing at your destination.

Visiting Italy? You may want to visit...

Verona: Perfect for a short break in the city

Palermo: Scenic and full of surprises