Blimey, it’s big. But don’t be deterred. China is also wild, bustling, ancient, modern, scenic and full of surprises. Get your head around it all with the best routes and more top itinerary ideas...

A comprehensive guide to the best of China is impossible. It’s a vast land, encompassing mountains, deserts, forest and enormous cities; it’s one of the world’s great civilisations, with 5,000 years of history; and, as the nation swaggers its way to the front of the world stage, the contemporary landscape is changing faster than anywhere else in the world.

China’s headlong plunge into modernity has made things better – the country is open as never before, new road and rail links make travel smooth and easy, English is more widely spoken and, as the populace embraces a consumer society, food and nightlife have vastly improved.

It would be easy to simply list China’s headline acts, but it’s the country’s smaller, quirkier destinations – with their haphazard charm and air of the unpredictable – that are often the more rewarding. It is more exciting to hike along a crumbling section of the Great Wall than to take the cable car to a reconstructed length; a cute little temple thronging with devotees lighting incense is more atmospheric than one full of snap-happy tourists.

All the itineraries below try to mix smaller sights with the grand big-hitters, to offer a tastier bite of this indigestible nation...

Skip ahead to your the route that spikes your curiosity most:

The Great Wall: East to west (3 weeks to one month)

The classic: Hong Kong to Beijing (2 to 3 weeks) 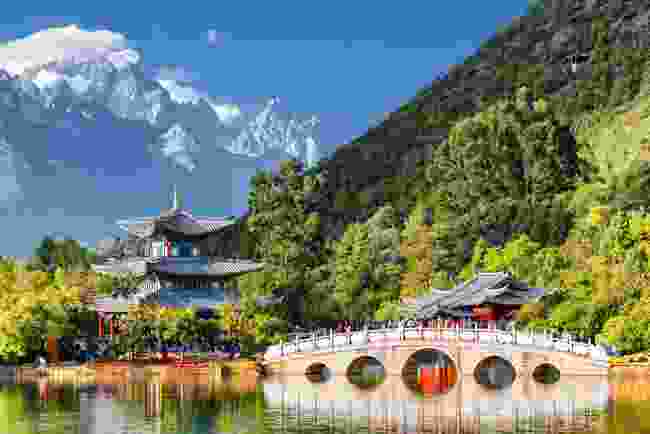 Yunnan is China’s coolest province, a traveller’s favourite. It offers a wide variety of scenery and peoples: half the population belongs to one of around 27 minorities, each with its own culture. Such diversity means you can pack a lot into a short trip.

Start in Kunming, the clement provincial capital, then head south to view the spectacular rice terraces of Yuanyang, before heading into steamy Xishuangbanna, which borders Laos. Base yourself in sleepy Jinghong, and arrange a three-day trek to the fascinating villages nearby, many of which nestle in deep jungle. 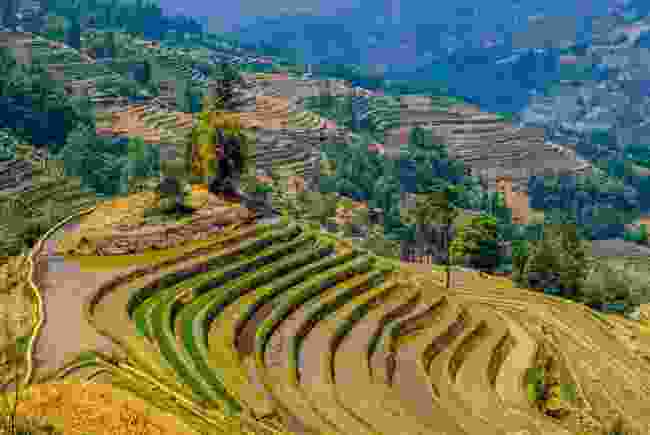 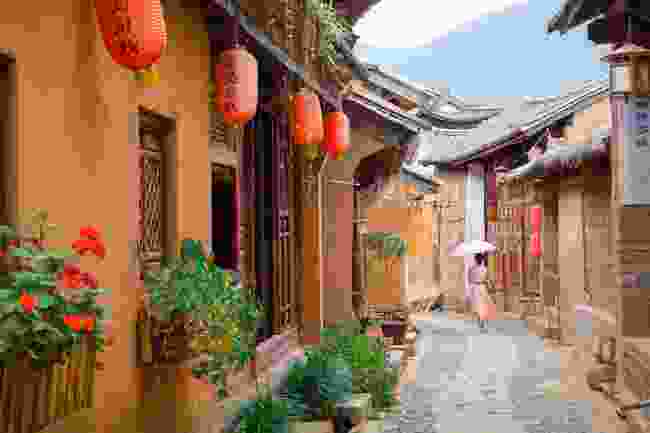 Fly north to Dali for a complete change of scene. This is the capital of the Bai people and a popular tourist spot. Escape the crowds by hiring a bike and explore the lovely Erhai Lake – all the quiet villages here have small accommodation options.

A few hours north by bus, nestling at the base of Jade Dragon Mountain, is Lijiang, homeland of the Naxi people. It’s a charming town of cobbled streets and wooden houses; though something of a tourist theme park, the local culture is fascinating. Head into the countryside for gorgeous scenery – at its best at Tiger Leaping Gorge, which can be hiked in two days; there are homestays en route.

The road north winds uphill, to the edge of the Tibetan plateau, and another minority homeland, the Tibetan town of Zhongdian. The old town isn’t very authentic, but Ganden monastery, on the outskirts, is lovely, and the rugged terrain offers good hiking. You can continue from here into Tibet, though (due to restrictions) only as part of a pricey organised tour. 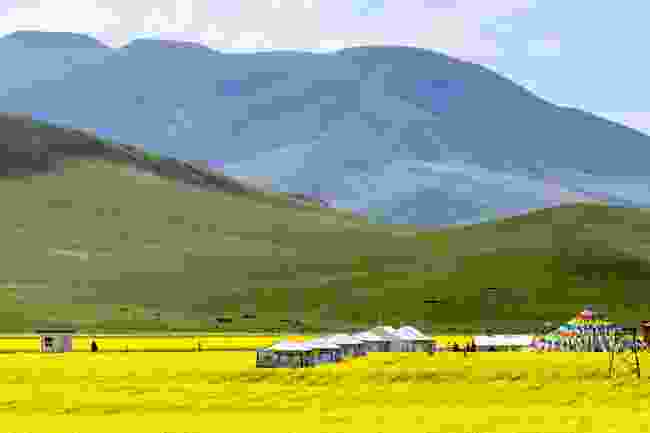 China’s wild west is a rugged wilderness of mountains, desert and grassland. Though making up almost a third of China’s area, it contains less than 5% of the population.

And much of that population is made up of minorities, who have distinct cultures of their own – most notably Tibetans, whose Buddhist traditions link them to Nepal and Mongolia, and Muslim Uyghurs, whose language is closer to Turkish than Chinese. Add Kazakhs and Kyrgyz, among others, and you have an area that feels very different from the rest of China.

Start in dusty Lanzhou, roughly in the middle of China, and take a day to see the Buddhist carvings at Bingling. Then bus to Xiahe, on the edge of the Tibetan plateau. This laidback friendly town is home to one of the most important holy sites of Tibetan Buddhism, the Labrang Monastery.

Though the town is Tibetan, thronging with pilgrims and monks, you’re technically outside Tibet, so there are none of the travel restrictions that apply in that territory. From here, head west to charming Tongren, then on to Xining, a base to visit scenic Qinghai Lake. It’s the biggest in China, and home to rare birds, including the migratory black-necked cranes that stop here in spring. 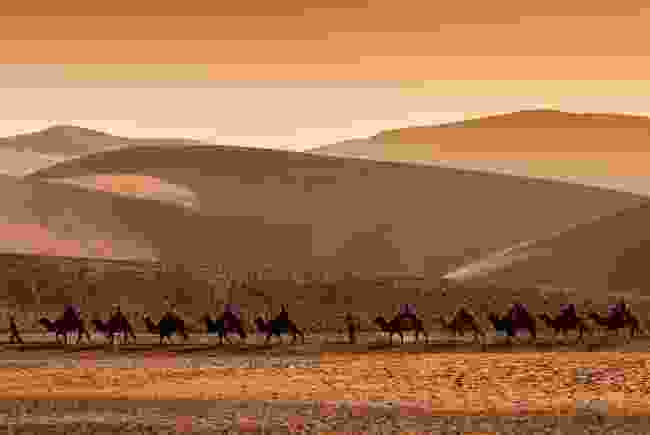 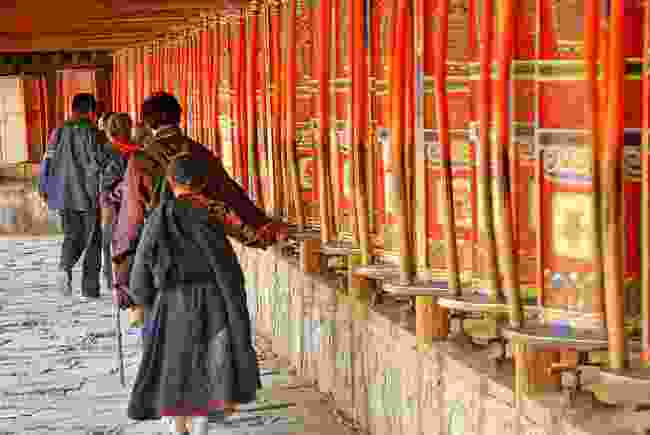 Continuing west by train into the Uyghur heartlands, you reach Jiayuguan, the last lonely outpost at the end of the Great Wall. Then it’s the welcoming tourist town of Dunhuang, best for visiting the spectacular Buddhist cave paintings at nearby Mogao.

Continue west by train from here, along the route of the old Silk Road to mellow Turpan, an oasis town dotted with archaeological curiosities and famed for grapes; their vines provide shade all over town.

It’s a short hop from here to Urumqi, the capital of the region, and as such rather more Chinese in feel than the surrounding towns. The last long leg of the journey is a 10-hour train ride, skirting the Taklamakan Desert, to Kashgar, a city right at the edge of the Chinese world – it’s over 4,000km from Beijing. The Central Asian influence is everywhere in evidence. Make sure you’re here on a Sunday, to see the huge and colourful bazaar.

3. The Great Wall: East to west 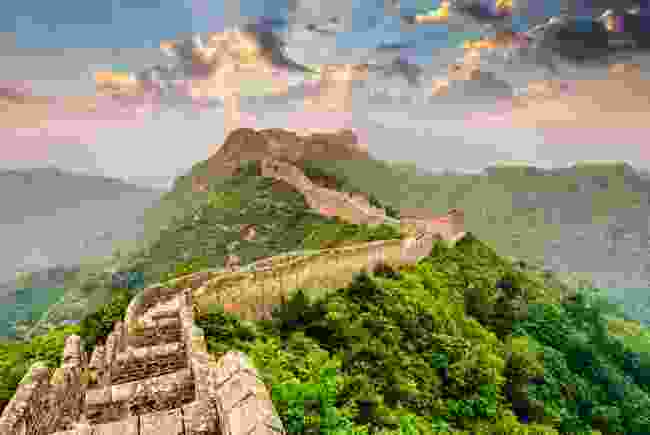 The Great Wall of China (Dreamstime)

What better landmark on which to hang a trip around China? Admittedly, you won’t see all that much of the wall itself, but tracing its route across the north of the country allows you to see a snapshot of modern China as well as a host of spectacular historical monuments.

Starting in Beijing, you can visit the Great Wall itself as a day trip, easily arranged with a tour agency. Avoid over-touristed Badaling and do the walk from Gubeikou to Jinshanling; if you’re intrepid (and fit), hike the ‘wild wall’ at remote, beautiful Jiankou. Then, a four-hour train ride to the coast takes you to sleepy Shanhaiguan, where the wall meets the sea. 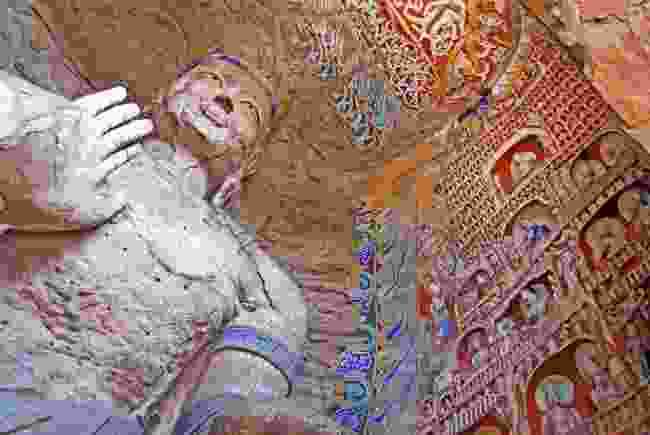 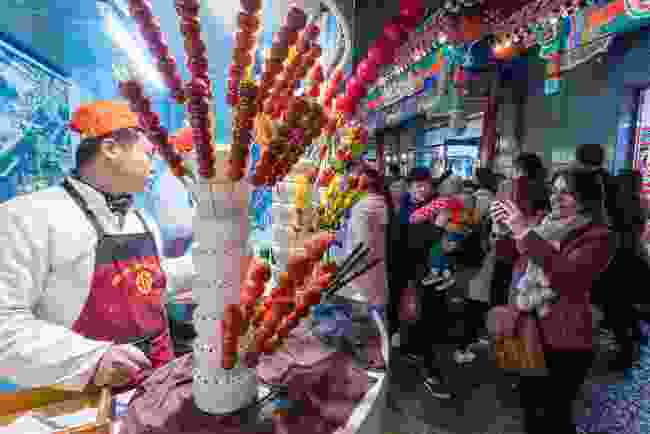 Turn inland, and take trains west to Datong, a gritty coal town. Cycle the rebuilt ramparts then take a day tour out to the gravity-defying Hanging Temple and the spectacular Buddhist cave carvings at Yungang. Further west, stop at Hohhot in Inner Mongolia and use the town as a base to investigate the vast grasslands to the north – preferably on horseback. You’ll meet the descendants of the people the wall was built to keep out: organise a yurt stay with a local agency.

A natural next break in the long ride west is at the curious resort town of Shapotou, where you can watch the Huang He (Yellow River) flowing between sandy dunes. A day south takes you to Lanzhou, a former garrison town with a big Muslim population – a great introduction to the people and cuisine of the far west. Finally, head to the town of Jiayuguan, where the wall terminates in memorable style, with a lonely desert fort looking out at formidable mountains.

4. The classic: Hong Kong to Beijing This grand tour ticks all the boxes – a little of everything, and all the big sites. It should take three weeks, two if you rush it.

Hong Kong is China’s easiest entry point: it’s a thriving, ultra-modern city with one of the world’s greatest skylines as well as fantastic food and some areas of great natural beauty close to the centre (take a ferry to Lamma if you have time).

Yangshuo is very different: a traveller’s oasis on the Li River, nestled amid dramatic limestone peaks. Chengdu follows, in the Sichuan Province. Sample fiery cuisine, take in some opera and sup at a teahouse; you could also coo over pandas at the rehabilitation centre. You can get a boat down the mighty Yangtze River from near Chengdu – a three-day cruise through lush landscapes ends at the vast Three Gorges Dam. 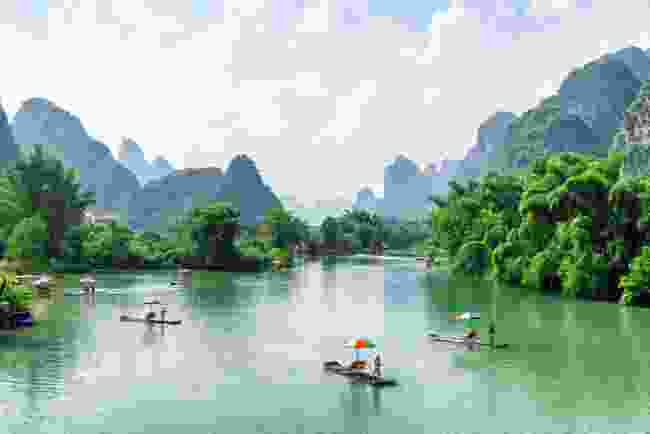 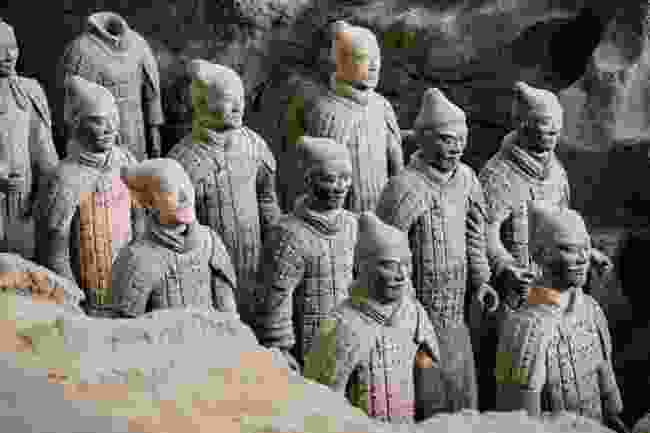 The Terracotta Army at the tomb of Qin Shi Huang (Shutterstock)

Next, tick off another must-see in Xi’an, where the 2,000-strong, lifesize Terracotta Army guards the tomb of the first Emperor, Qin Shi Huang. Pingyao, to the north, provides a refreshing change of scale. It’s one of the best-preserved ancient towns in China, offering the chance to stay in a Ming Dynasty courtyard.

The last stop is Beijing, which is full of monuments – as well as the Temple of Heaven and the Forbidden City, don’t miss the Summer Palace. Take the chance to explore the nightlife scene – head to Houhai. Also, browse the galleries at the huge 798 Art District and be sure to take a day trip to the Great Wall. 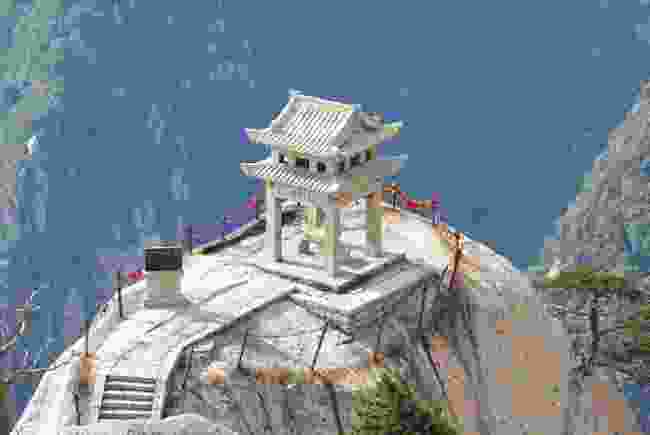 The Yellow River Valley is the cradle of Chinese civilisation, where remains of vanished dynasties scatter a landscape of loess terraces.

Start in Xi’an, the most spectacular of the historic capitals, where the Terracotta Army stands guard at Qin Shi Huang’s tomb. It’s a short trip east to Hua Shan, the holy mountain, which offers some of the best mountain scenery in China – though it’s hardly a wilderness experience, as the trails are busy with pilgrims. 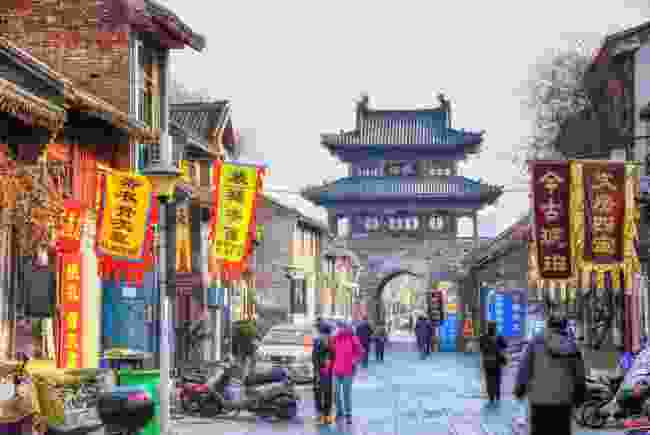 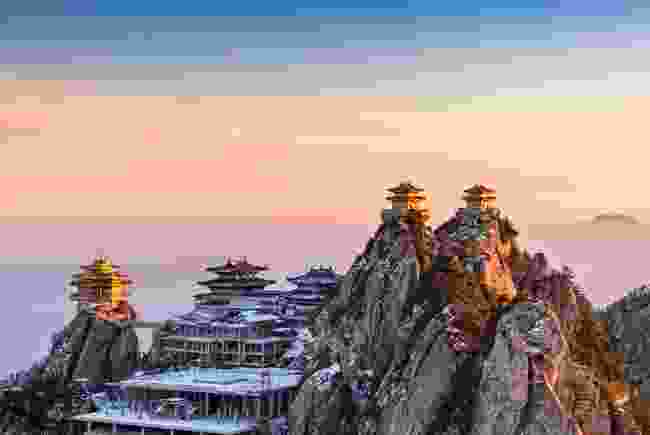 Luoyang, a couple of hours east by train, has a fantastic museum of dynastic artefacts; just outside town are the Longmen Caves, a beautiful parade of Buddhist figurines and reliefs. A little further east, Song Shan is a holy mountain, and hosts the legendary Shaolin Temple, home of Chinese kung fu.

To the east, Kaifeng – another ancient capital – offers architectural treasures and an intimate, human scale that’s missing in the large cities. Similar attractions are on offer at Qufu, birthplace of Confucius. Finish the trip with a hike up Tai Shan, a holy mountain whose steep trails are lined with grand imperial monuments.

For more help on planning your trip to China, read:

10 things to do for free in Beijing

Why you should add Shenzhen to your China trip