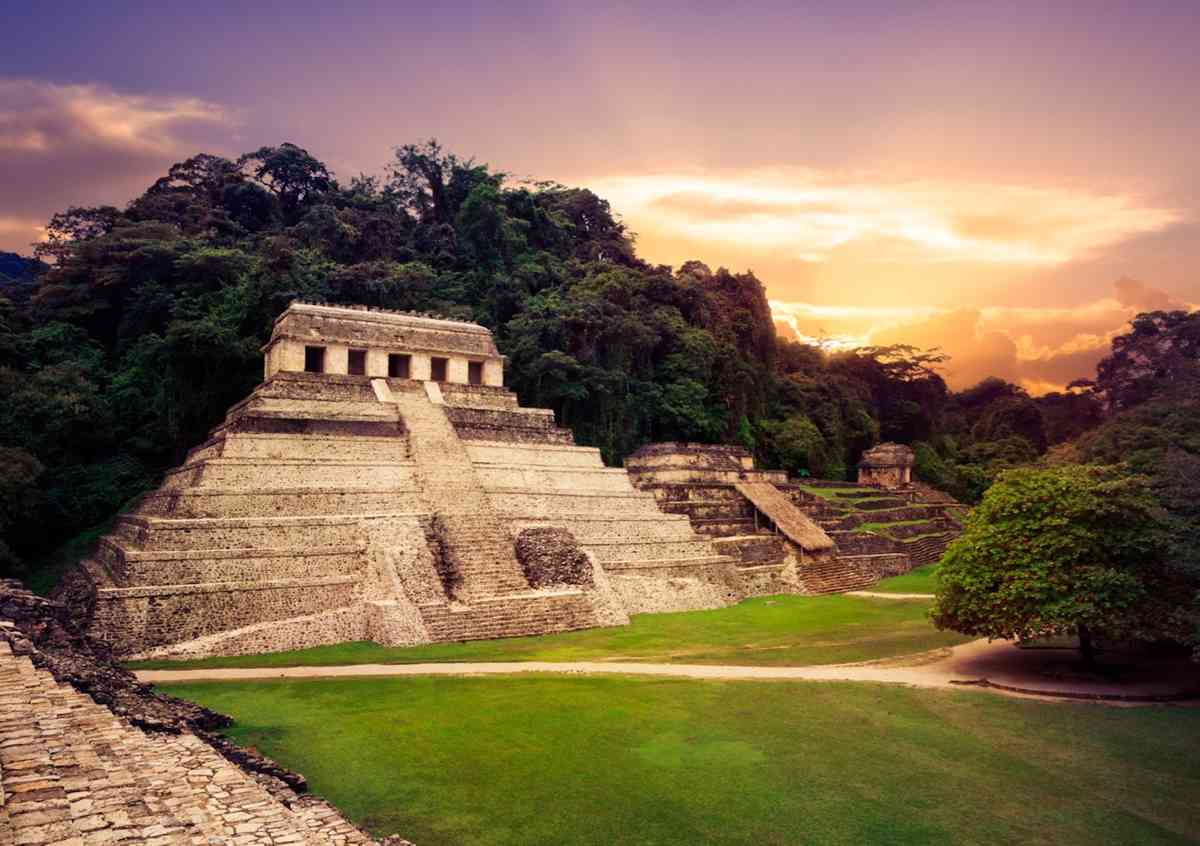 In the same neck of the woods as Guatemala and the Yucatán, it’s no surprise that Chiapas, in south-east México, ranks as one of the top destinations for travellers wanting to explore the ancient Mayan world. The massive, sparsely populated region has temples as big as hills, many still unexplored and yet to be excavated.

Palenque, a UNESCO World Heritage Site, is one of the most important Mayan sites in the world, a huge complex of pyramids and temples immersed in the jungle. An adventure to explore, it’s famous for former ruler Pakal´s tomb, which sits next to the vivid Red Queen´s tomb. Admiring the dedicated carvings on the tops of the temples while listening to the rumbling river passing by is worth the steep hike.

It’s also worth waking up early in the morning (although the noisy howler monkeys might have made sure of that already) in order to witness the main temples and massive ceiba trees appearing out of nowhere when the morning fog clears.

The Bonampak Ruins, known for the excellently preserved colourful frescoes, and Toniná are just two other key archaeological sites worth a visit for anyone curious about this ancient civilisation.

If they don’t quench your thirst for adventure, head for Yaxchilán, an archaeological zone on the banks of the river Usumacinta. Previously a rival city to Palenque, it’s submerged in thick jungle and was hidden from the world until the 19th century. Getting there involves going up the Usumacinta River that divides Guatemala and Mexico by motorised canoe, spotting open-jawed crocodiles along the way.

2: Get your binoculars ready for world class bird watching 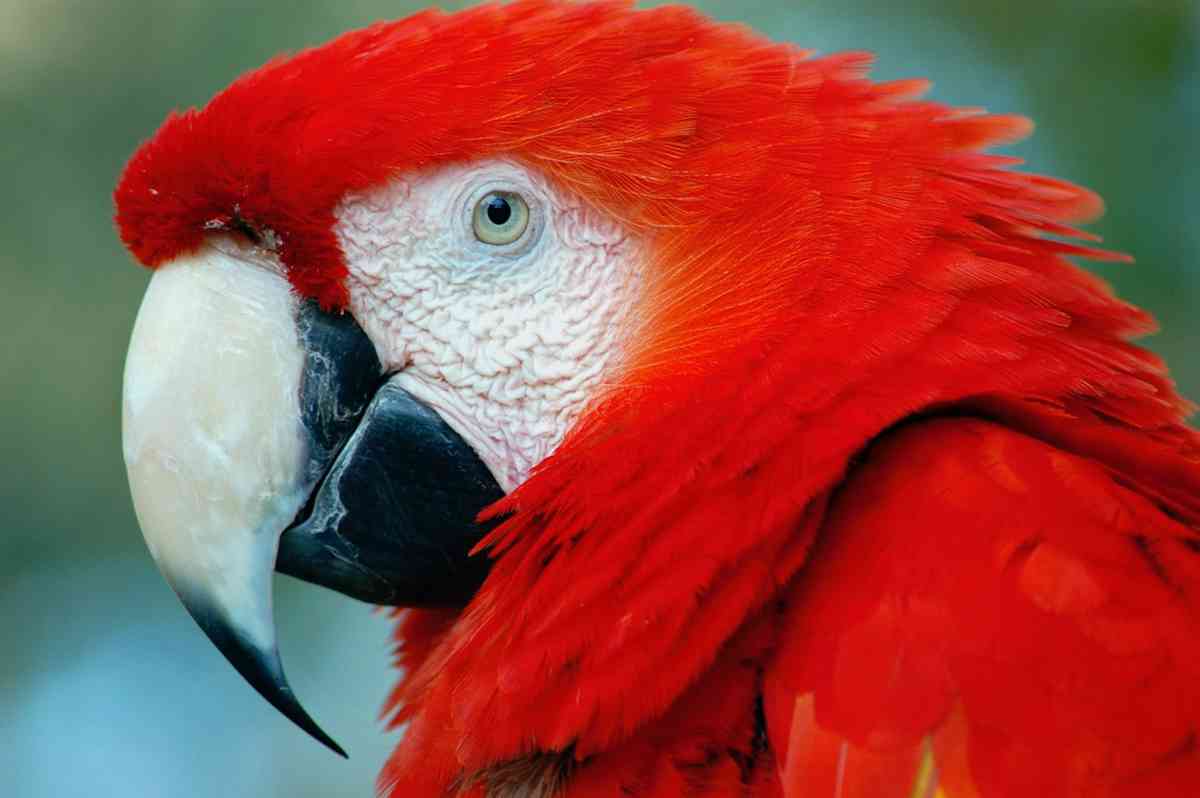 Chiapas’s diverse ecosystems are full of life. It’s worth keeping your eyes open to spot anything from monkeys to jaguars, as well as turtles in the Turtle Sanctuary in Puerto Arista at the Pacific coast.

But it’s the colourful bird life that is really putting Chiapas on the map. In the mornings, hike around the Lacandón area, where it’s possible to spot toucans, white-crowned parrots, green parakeets and, if more time's invested, white hawks or bat falcons enjoying their breakfast. Striking quetzals are also found in Chiapas' highlands.

Nature-lovers should also head to Montes Azules Biosphere Reserve, an area of around 300,000 acres, filled with lakes, rivers and lagoons, with towering ceiba and cedar trees reaching 60 metres in height. Explore with a local guide who’ll point out birds and other creatures, as well as some of the 4,300 species of flowers found here.

3: Get active in the jungle and on the rivers 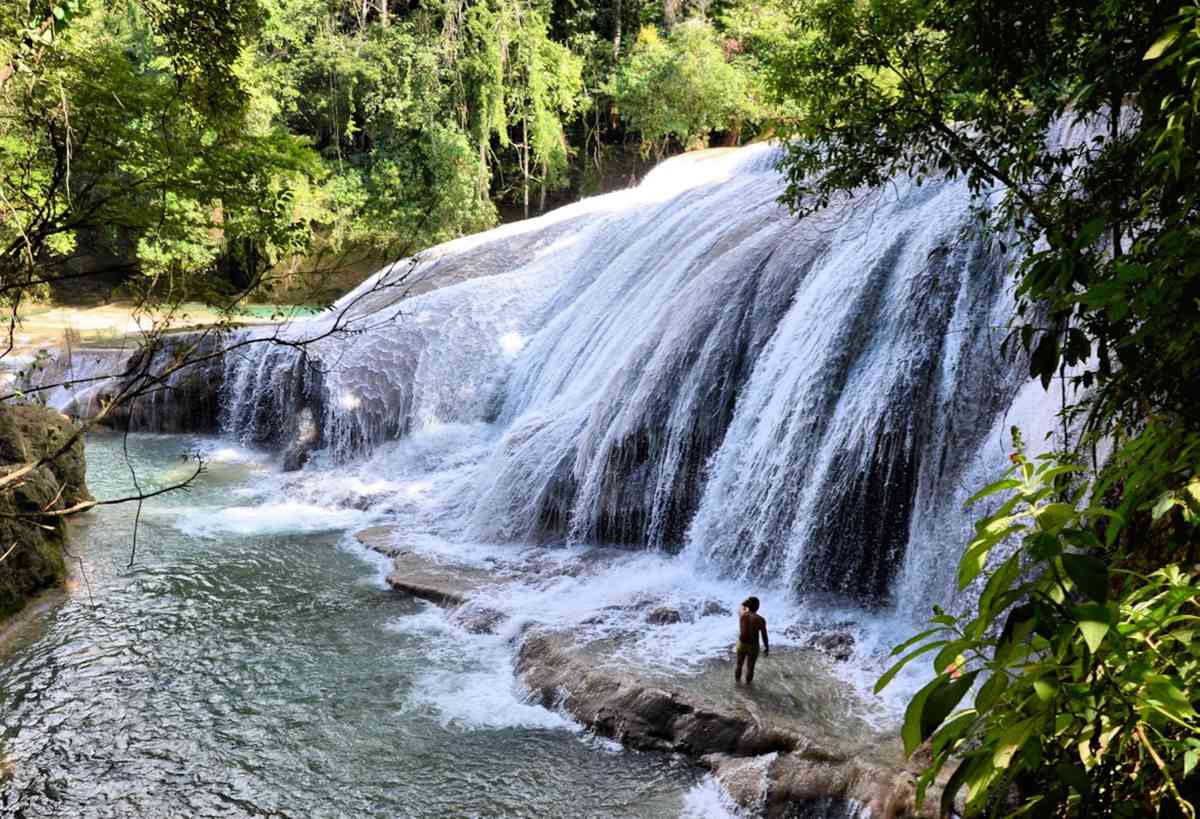 Chiapas is becoming increasingly popular with travellers seeking active adventures, from surfing off the coast at Boca del Cielo beach to kayaking and whitewater rafting on rushing rivers immersed in the lush jungle of Lacanjá or hiking the 4100-metre active Tacaná volcano.

Visiting the numerous waterfalls around the archaeological zone of Palenque is fun and surprisingly inexpensive. It’s worth taking a local ‘collectivo’ (public van) from point to point for heartbeat-quickening activities, including ziplining across the waterfall systems or waterfall-jumping, which is carefully instructed by local kids.

Another good way to spend a day is to get on a boat to admire the walls of the Sumidero Canyon that reach heights of more than 900 metres. Feel the spray on your face along the way.

For those who prefer to stay dry, there’s some excellent mountain biking to be had in the surroundings of San Cristobal de las Casas, with intriguing stops possible, including a visit to humongous, recently discovered cave systems, like Las Grutas El Mamut, or El Arcotete, a cave system that can be enjoyed with rock climbing or more ziplining.

4: Soak up the local culture 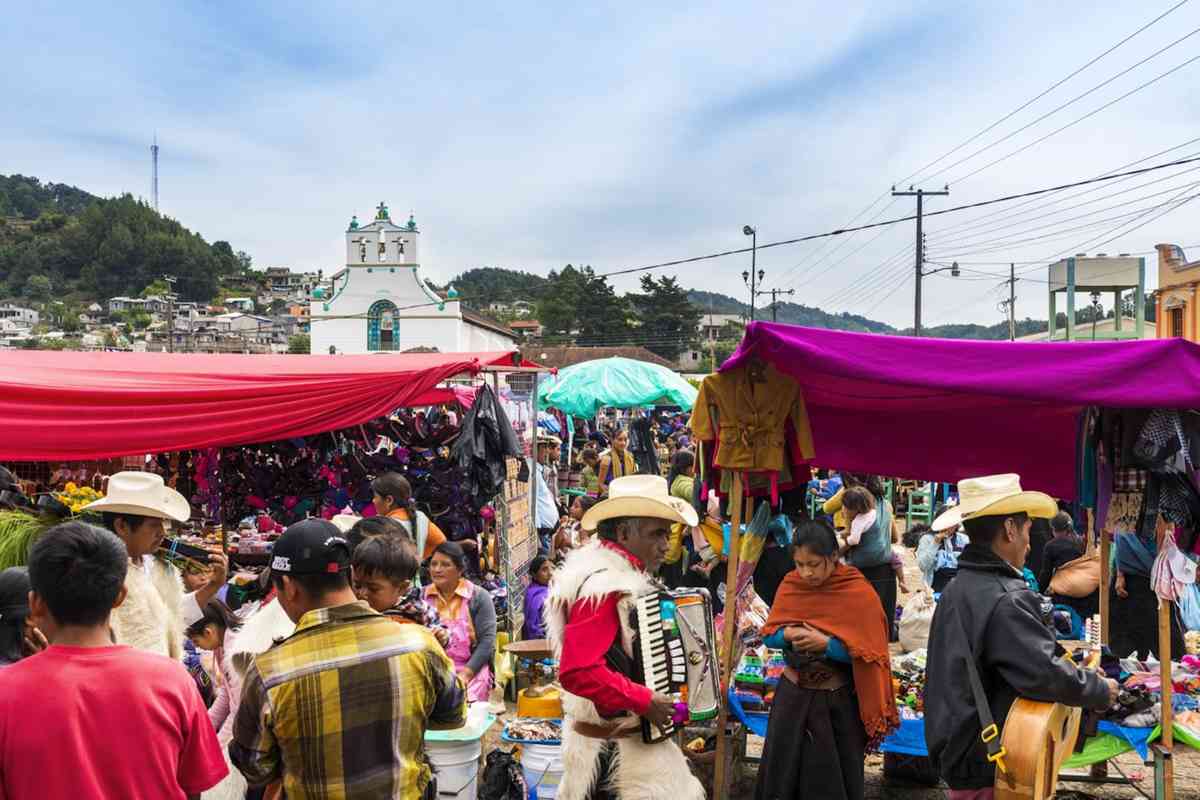 Contemporary Mayan cultures, found across Guatemala, Belize and southern states of México, have inherited the ideas and ‘cosmovision’ of the civilization that blossomed 1500 years ago. In Chiapas alone, there are 12 ethnic groups that still speak Mayan, each with small variations. These groups have their own system of rules for government and religious rituals, as well as characteristic textiles that define them, which are carefully woven and shown with pride at markets, churches and plazas.

Visiting the varied territories where these groups live allows travellers a glimpse of how Mayan heritage today reflects their ancient heritage along with elements of colonial Spanish culture and beyond. For example, take a guided tour around the town of San Juan Chamula, inhabited by the Tzotziles, and you might be shown how modern items have been incorporated into traditional rituals, including Coca Cola, which is believed to help expel ‘evil’ from the body while burping.

In San Juan Chamula church, instead of seats, they have pine leaves and beautiful coloured candles spread all over the floor. There's no priest giving mass here, just statues of saints that have mirrors hanging from their necks as a form of protection. The saints receive offerings of Pox (a local alcoholic drink made from fermented corn) from local people.

Alex and Raul Tours offer tours of San Juan Chamula and other towns, such as Zinacantan, to help travellers learn more about local cultures.

It’s also always wise to keep an eye or ear open for news of festivals and local events too. In Chiapas, it’s easy to stumble upon colourful parades and loud firework displays. 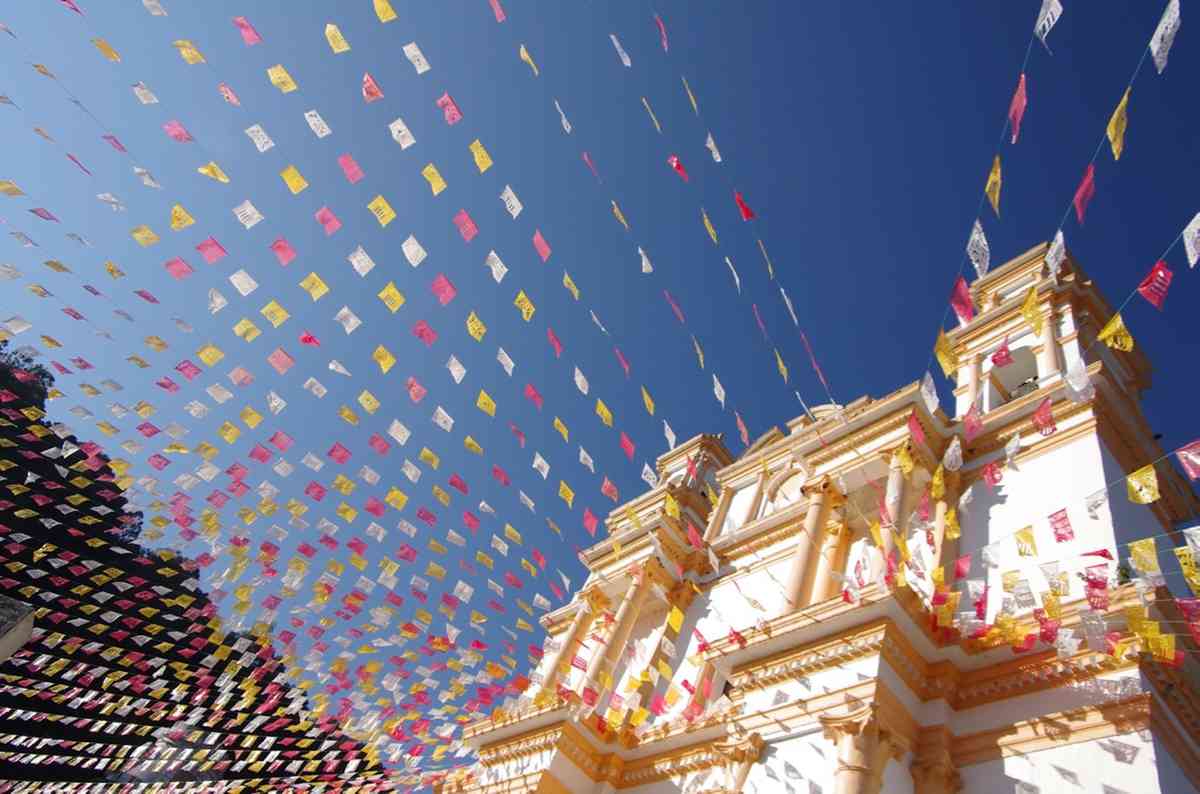 With foggy mornings and cobblestone streets that pass through colourful houses, the colonial town of San Cris (as the locals call it) is one of the big reasons to visit Chiapas.

Picture a Catholic church sharing the same plaza with a Mayan cross, both cultures cohabitating in harmony, then throw into the scene galleries selling colourful modern art by locals and expats who fell in love with the area and now call it home. In these artist’s workrooms, you’ll often find art that pays tribute to some of the traditional weaving designs and ways of living among the ethnic groups.

The exaltation of EZLN (Ejército Zapatista Liberación Nacional) values, an autonomous local ‘army’ dedicated to defending the rights and land of the indigenous groups, means you’ll see restaurants and cafés that exclusively use products grown and created by local cooperatives, giving back to the communities a fair trade. All of this is framed with beautiful sunsets, delicious street food and a laidback feel.

In San Cris, perhaps the best thing to do is to sit down in one of the local cafés to enjoy a good cup of fresh coffee and the morning sunshine, while watching people pass by. It’s likely you’ll have a little chat with the indigenous women who might try to sell some of their weavings or the popular hand-made stuffed animals, or you might get to listen to a local instrument being played on the street.

For those who´ve spent time in Chiapas hiking through the jungle, paddling down whitewater rivers or searching for colourful birds, San Cris is definitely the place to take it easy.

Andrea Moreno is a travel writer and photographer, based in Mexico. Follow her on Instagram at www.instagram.com/tripsandcolors/.