The crab moved fast, scurrying along the muddy wall of the riverbank into the safety of its hole. It’s the kind of cautiousness that aids survival, especially in a place where you’re a popular item for dinner. “They taste very good”, laughed Rang-sri Prasopturm, hiking guide and member of the Red Lahu, as we waded through the water. “I eat all the animals in the forest: cicadas, spiders, worms… And beer and whisky,” he joked.

The occasional glass of whisky aside, these items weren’t on the menu for us, thankfully, during a new ‘hilltribes’ trek in northern Thailand, not far from the border with Myanmar (Burma). But this three-day expedition was a chance to see how local people live in the remote hills and forests of this not-often-visited region, a rural way of life that’s close to nature. 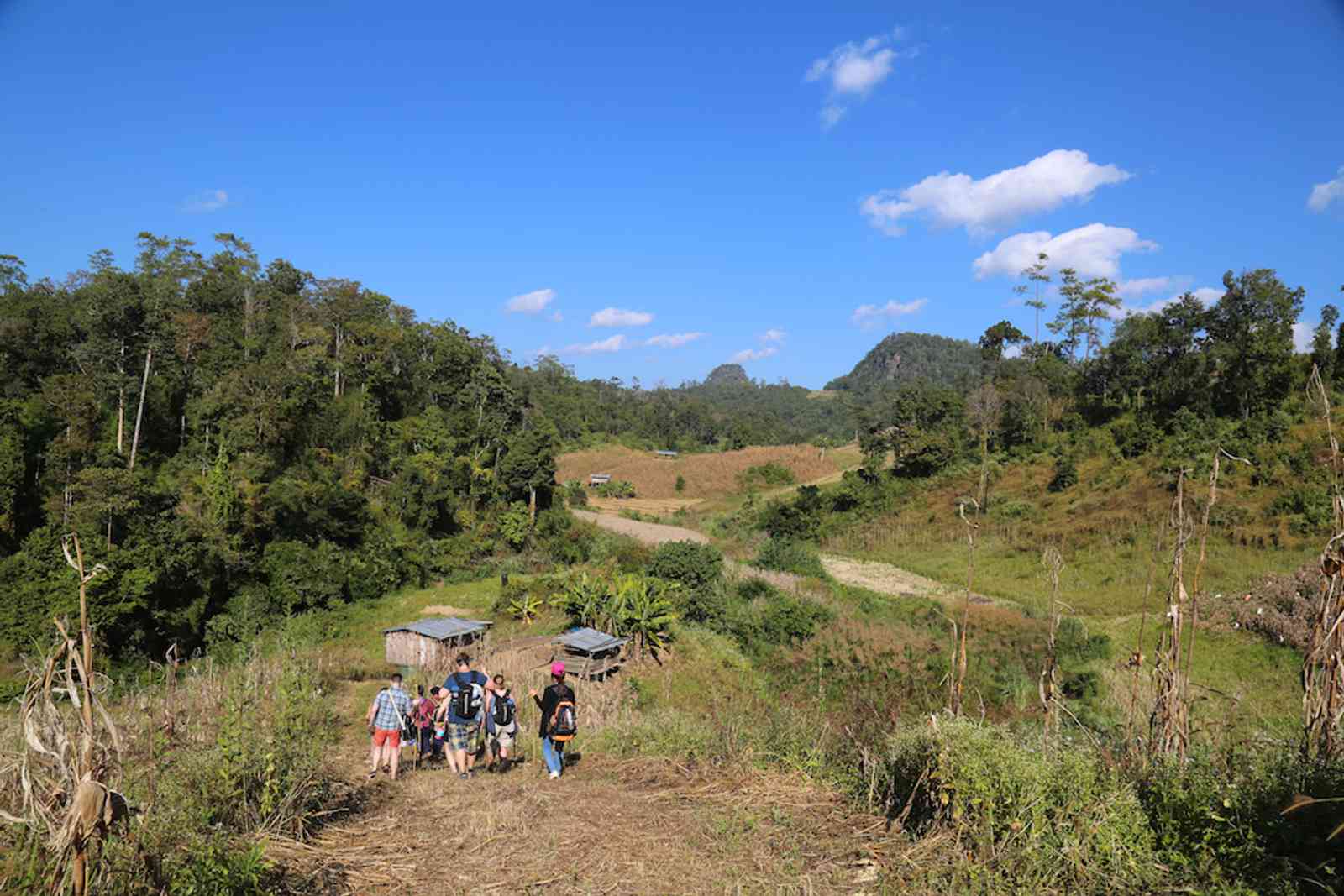 The new trek and homestays have been created, in part, to help bring money and development to these rural communities. Staying with local people in small, agricultural villages along the trekking route, accommodation was basic, with thin mattresses to sleep on on the floors of wooden houses. There was no Wi-Fi, a welcome break from the modern world. ‘Showers’ involved pouring cold water over yourself with a saucepan.

Before starting the trek, I spent time in Chiang Mai, the ‘capital of the north’, a far mellower city than Bangkok. Here, there are busy streets filled with traffic, but there are also peaceful golden temples where monks in saffron robes stroll around and the air’s thick with incense. I spent a day exploring temples inside the Old Town, checking out golden statues of Buddha and carvings of serpents and dragons. 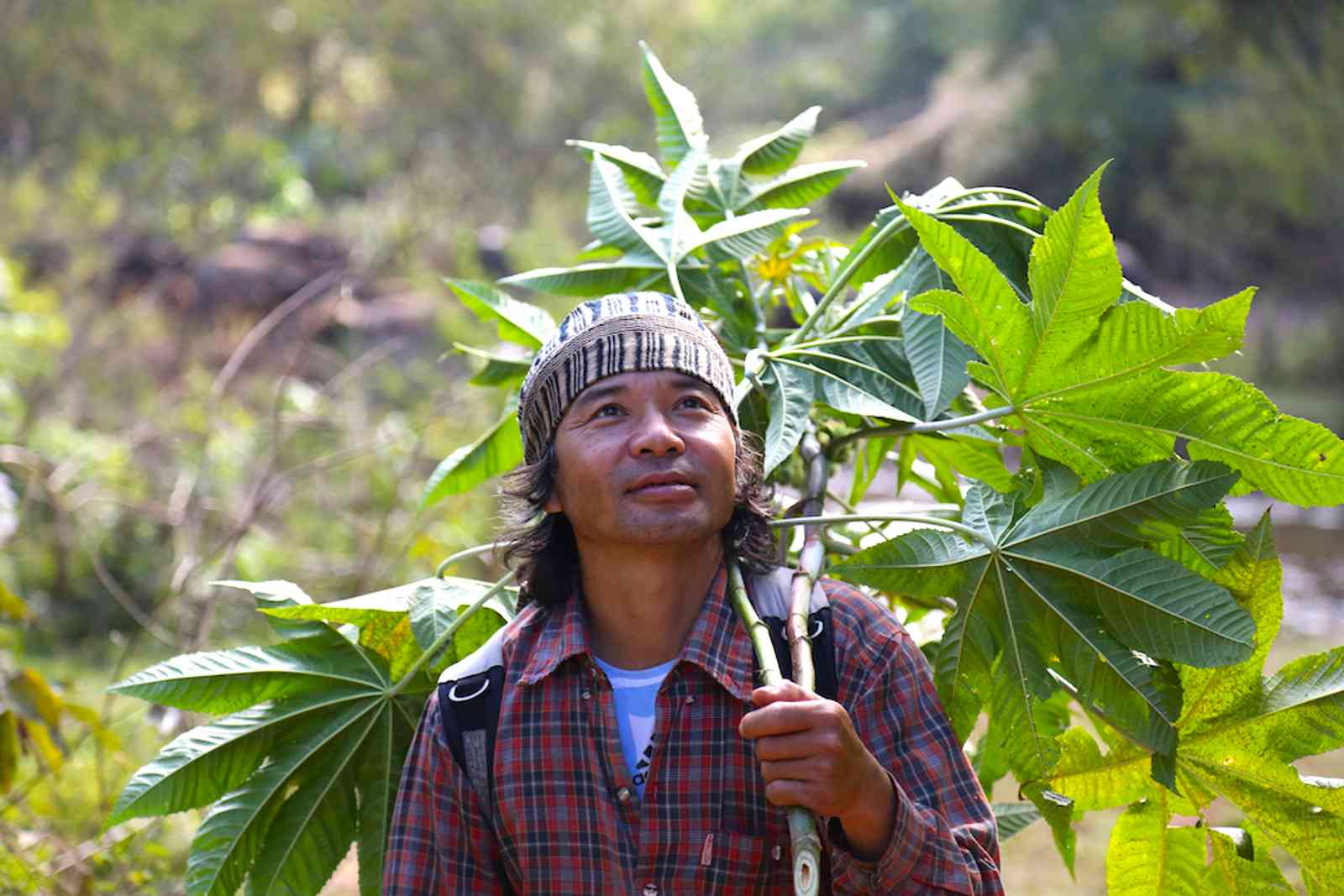 I teamed up with my trekking group at a local hotel and we drove out of Chiang Mai, the road snaking (we were warned of ‘2000 bends’) and climbing high into lush, green hills. Most ‘hilltribes’ treks start around two hours outside of Chiang Mai, but these easy-to-access areas have grown popular over the last 20-30 years, with some trails reported to be overrun with travellers and overly commercialised, local people putting the hard sell on hikers to buy handmade crafts and jewellery. 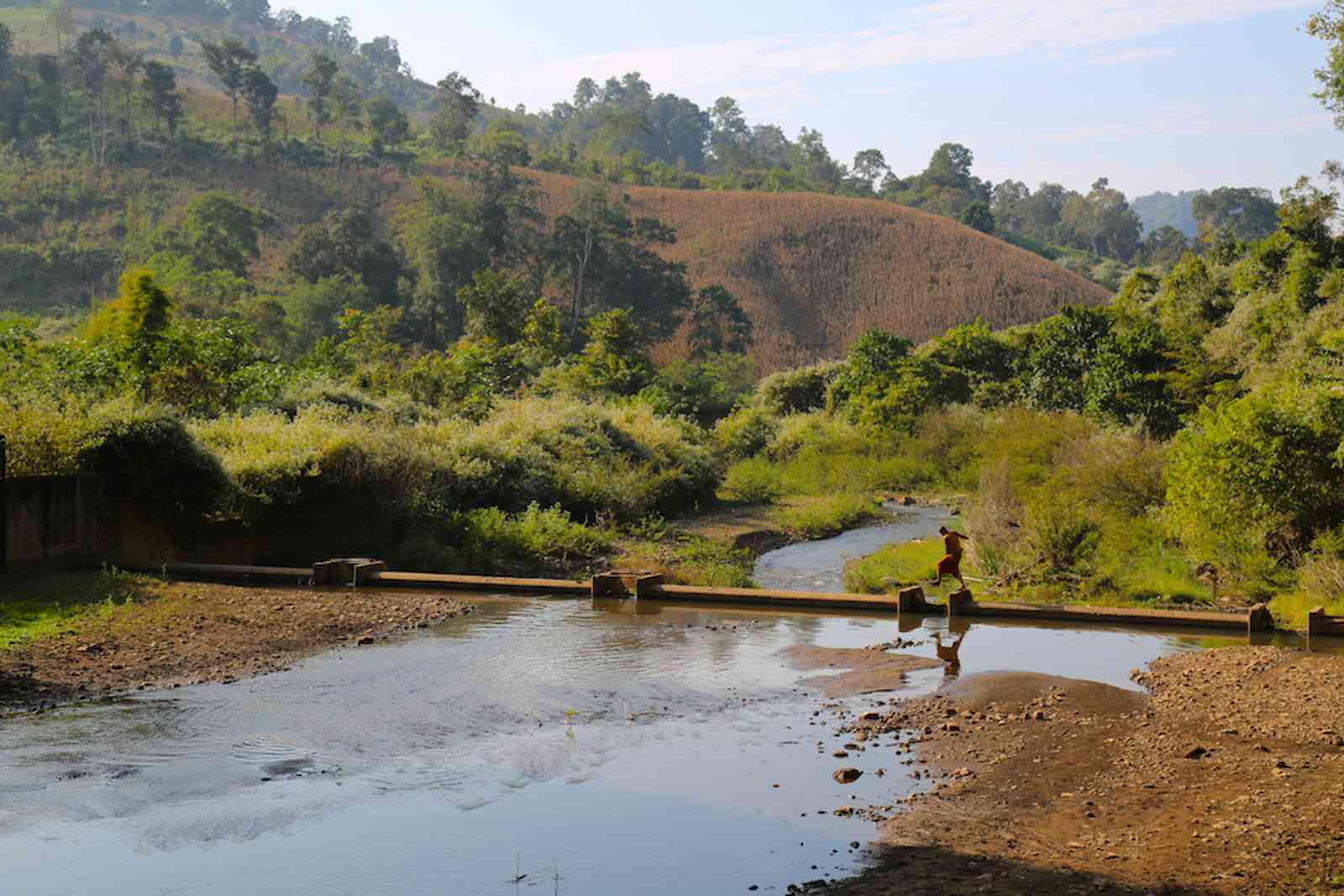 A monk crosses the river in Chiang Mai (Graeme Green)

Our guide, Aviruth Meesupa (who goes by the nickname Ball) introduced us to the locals who’d be leading us through the forest, including shy Yajoe Sankampoe from the White Karen tribe and the more outgoing Rang-sri Prasopturm from the Red Lahu,, and we set off.

Hiking in the peaceful shade of the forest was instantly calming, with no noise from traffic or machinery, just birdsong and our footsteps. Yajoe ducked under some trees and returned with a handful of passion fruit, which he split with his machete and handed out. “We live a really simple life,” he told me, as we walked on. “We live together. We live with nature.”

Rang-sri pointed to plants used by local people who know the forest: a tree’s bark is stripped and tightly twisted into a thread to make rope; another plant’s leaves are used to treat wounds. Through gaps in the trees, I see limestone peaks looming above us.

After lunch in a bamboo shelter prepared by local women from the Red Lahu tribe (rice, fried cabbage and egg, grilled Snakehead fish), we completed a few short climbs in the hot afternoon sun, before making our way across a green valley and up to the village of Pha Mon. 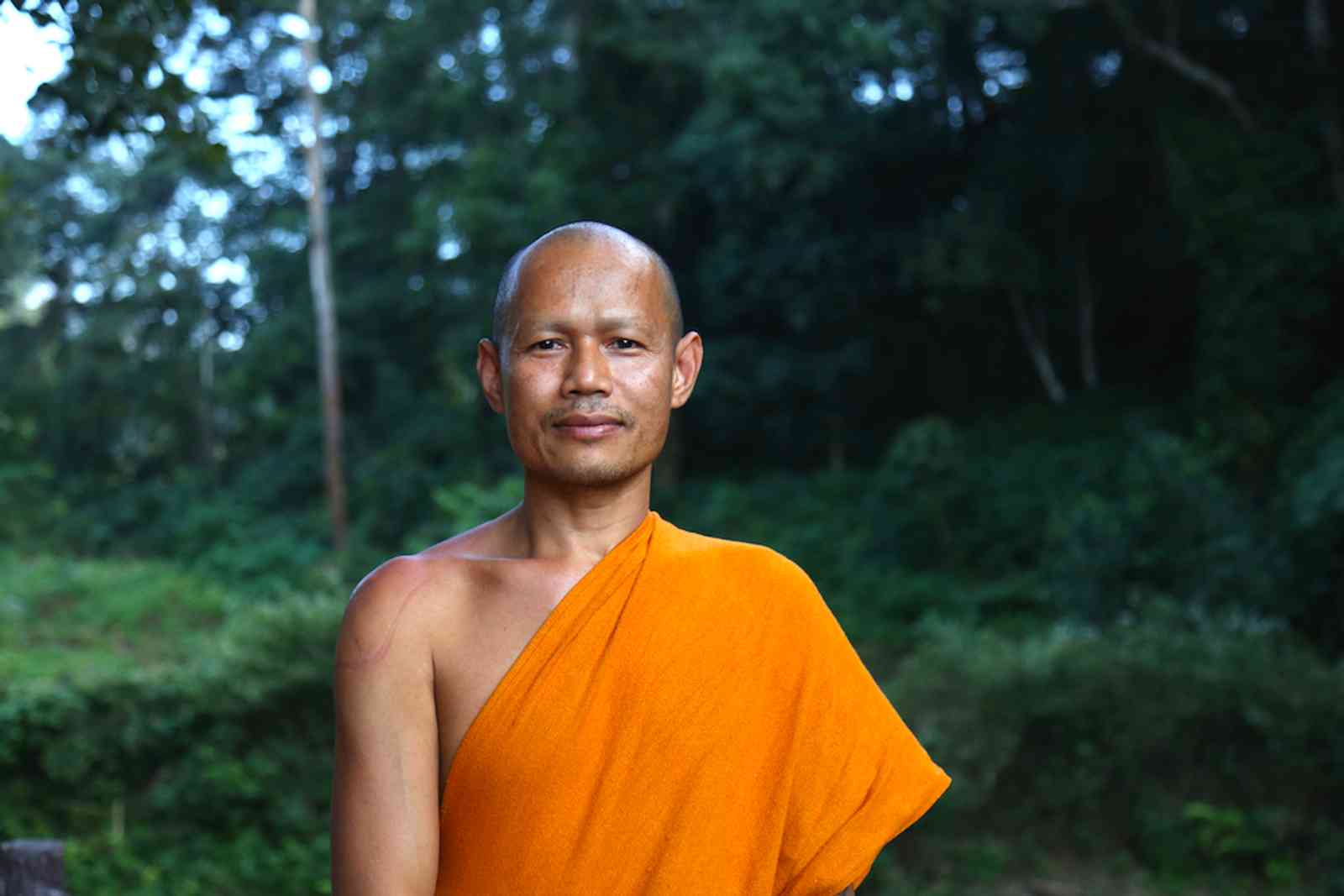 A monk in the forest (Graeme Green)

72 families live in Pha Mon, many of them farmers. Roosters, pigs and dogs ambled through the streets, but the village was more developed than I expected, with trucks and motorbikes parked outside big wooden and concrete houses. Many villagers own smartphones or iPads, and I noticed satellite dishes around the village. This isn’t the picture of traditional ‘tribal’ life travellers might expect on a ‘hilltribes' trek; local people wear jeans, T-shirts and sweatshirts, rather than traditional costumes or decorative jewellery. What we got instead is a slice of quiet, rural life.

Yajoe guided two fellow hikers and I into this home. “I like living here,” he told us (with Ball translating), as we sat cross-legged for dinner, daylight fading over the cornfields. “I feel free here. I go where I want to go. I feel safe and comfortable. We have little money, but it’s good here.”

Villagers hope the community’s tourism project can help bring money into the area, which was previously dominated by opium production. “Many villages in the past developed in this way, the ‘black business’,” Yajoe explained. “Now, we can grow anything: rice, corn… It’s better money. And we feel less scared of soldiers coming, because opium was illegal.” 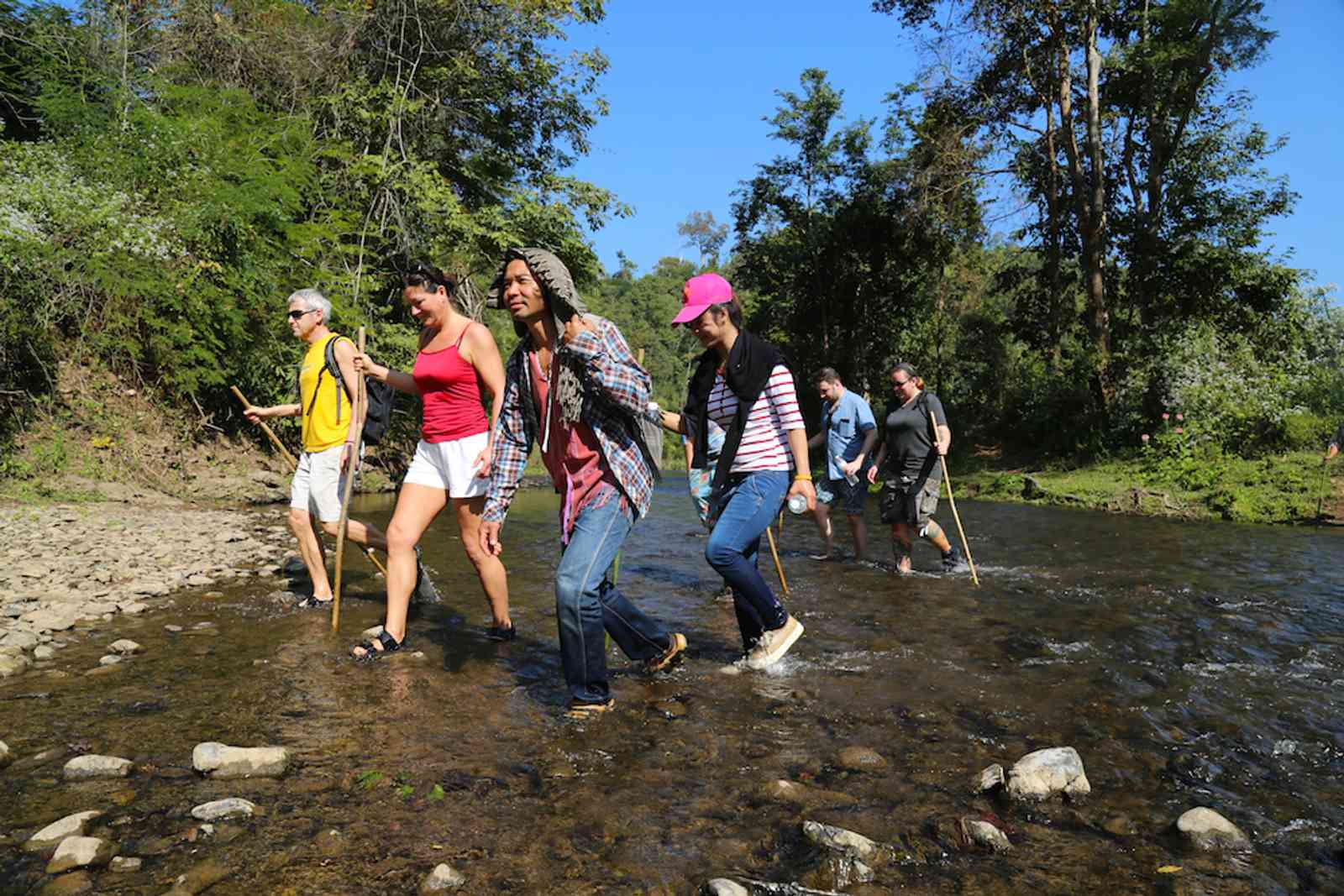 I woke to a chorus of roosters. Smoke from kitchen fires drifted through the village as we set off. We hiked through a wide valley and up steep forest trails on our way from Pha Mon to the White Karen village of Muang Pam. Rang-sri sang and whistled as we followed a river, stepping in and out of the shallow water. Large spiders hung in webs across tree branches.

In the afternoon, we passed buffaloes lazing by a river, then climbed a ladder to a cave where Rang-sri pointed out us the Saedi pagoda (shrine). “This is 600 years old, maybe built by the Chan people,” he said.

Later, Rang-sri broke off a leafy branch from an aubergine tree and dipped the branch into a river teeming with big dark Soro Brooke Carp. The water thrashed, a frenzy of fish heads and tails. Seconds later, the branch was bare, stripped by the fish.

With a population of 600, Muang Pam village is larger than Pha Mon. In the evening, a small group of us relaxed around the kitchen fire in Rang-sri’s home, joined by a lively puppy and bold chickens scavenging for scraps. Dinner included a bowl of ferns and tasty mushrooms that Rang-sri had picked from the forest during our hike. Glasses of whisky are passed around to everyone, except Yajoe, whose wife, he explained, can communicate with spirits (villagers call themselves Buddhist, but believe in spirits and other elements of Animism). The spirits have told her that she’ll become ill if her husband drinks; Yajoe hasn’t touched a drop in three years.

We chatted about village life. “The life here is simple and easy,” Rang-sri said, as we ate. “If I lived in the city, people have too many things to do every day,” Rang-sri continued, explaining the appeal of village life. “They rush, they never go slow, like in this village. The simple life is better.”

Electricity, TV and the Internet are all fairly new arrivals here. Rang-sri pointed to the TV across the room, the first TV that came into the village. Other changes have come to the village, too. “We’ve lost some of our skills. Some old people can still weave a basket, but young people might just buy a plastic basket. Life is more convenient. People buy what they need from the city. But the way of living is the same.”

After another rooster alarm call, our group hiked out of the village to spend the morning crossing a winding river, up to our knees in cool water. “This is the Lang river,” Rang-sri told me. “It comes in here from Myanmar. The border is just 20 km away.” 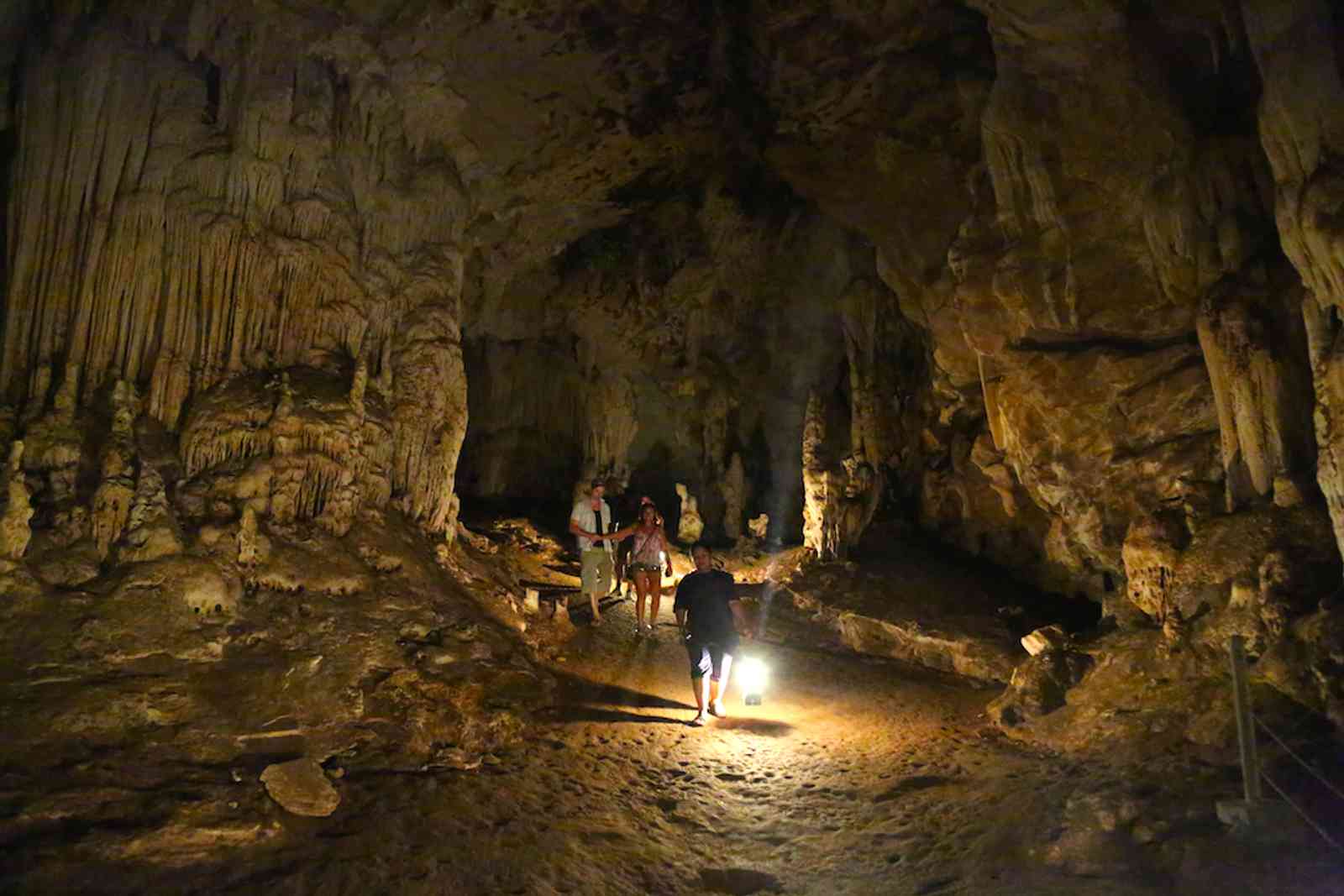 We cut through small farms and came out at a spot on the river where teenage boys were throwing nets to catch small fish. Our van was waiting there at the trek’s end to carry us to nearby Tham Nam Lod Wildlife & Nature Education Centre, a vast cave system with columns, stalactites, stalagmites and a rock formation shaped like a crocodile deep inside. It’s our final stop before our group loads up into the van to return to Chiang Mai.

We started the drive back along the ‘2000 bends’, dropping Rang-sri and Yajoe by the roadside. I watched the two men disappear into the peaceful, green forest, making their way back to the ‘simple life’ in time for dinner, perhaps crabs, ferns and, for Rang-sri at least, one or two whiskies.

The author travelled with G Adventures (www.gadventures.co.uk), whose new 5-day Northern Thailand Hilltribes Trek costs from £229 per person, including 2 nights at a hotel in Chiang Mai with breakfast, all meals during the trek, van transport and guides. Thai Airways (www.thaiairways.com) have return flights from Phnom Penh to Chiang Mai (via Bangkok). In Chiang Mai, the author stayed at 137 Pillars House hotel (www.137pillarshouse.com).

For more green and eco stories on Thailand, see www.greenthailand.co.uk