Don’t let Iceland’s pricy reputation put you off. Here’s how to camp and road trip your way around the the country’s mountains, fjords and volcanoes, saving money along the way

No-one's suggesting that the Land of Fire and Ice can’t burn a hole in your wallet, but what many people forget is that its biggest attractions, from mighty waterfalls to mesmerising seascapes, are completely free. There are ways of travelling to minimise the costs, so you can travel out of this world for not-so-astronomical prices.

Check out six top tips and six of the best thrifty trip ideas, below...

Top tips for visiting Iceland on a budget 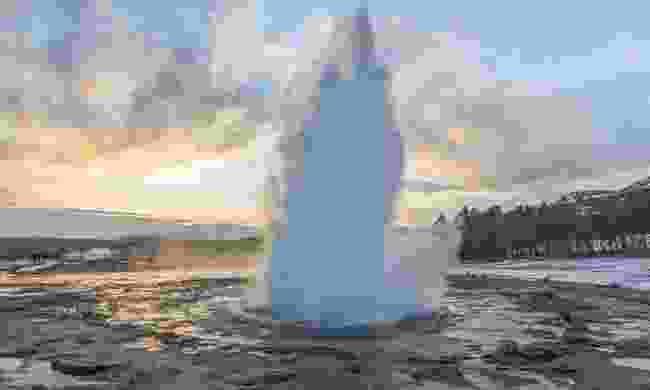 Why go? This approximately 300km road trip rounds up a triple whammy of natural wonders.  It's better – and cheaper – to do it over two days rather than one.

When to go: Spring and autumn – generally cheaper and less busy than summer. Spring sees long days and a dash of snow left over from winter; in autumn the tundra turns russet and gold. Northern lights sightings are possible from September to April.

To complete the so-called Golden Circle – which comprises the twin-tiered cascade of Gullfoss, the geothermal hotspot of Geysir and the tectonic rift at Thingvellir NP – most people base themselves in Reykjavík, combining expensive city accommodation with a full-day coach tour that costs around £100. However, hiring a basic car at Keflavík airport for a weekend in late June costs little more, and as well as having your own transport for a couple of days, you won’t have to pay for airport transfers and you’ll have the freedom to explore the Golden Circle independently.

Tour buses return to the capital around 5pm; with your own wheels you don’t have to, leaving long hours of daylight during summer to visit the popular sites later in the day without the crowds. You’ll also have plenty of time to track down the Golden Circle’s less-visited attractions, such as Faxi waterfall and the volcanic crater lake of Kerid.

You’ll also have more time to explore the excellent walking opportunities in Thingvellir, including the hike along the ancient Langistigur pathway to the Althing, site of the world’s oldest parliament, dating from 930 AD. Another advantage of self-drive is that you can stay somewhere more affordable in the countryside. Options range from guesthouses to hostels and campsites. 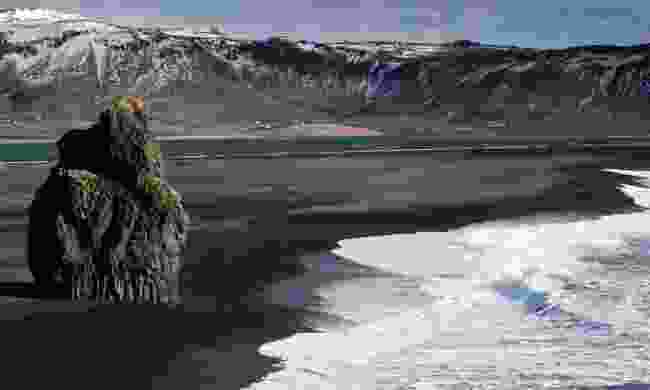 Why go? See the surreal sights of the south-west for less by self-driving and self-catering

When to go: May to October, for easier 2WD self-driving and longer days.

Comprising a surf-raked coast of black-sand beaches and a brooding interior of volcanoes and icecaps, Iceland’s south-west is a popular focal point for Iceland first-timers with more than a weekend to spare.

Many of the region’s highlights are easily accessible via the well-sealed tarmac Ring Road. This means there’s no need to hire an expensive 4WD. Also, you can happily base yourself at a self-catering apartment – an excellent way to reduce your food bill – and make day-trips to different areas. For the biggest savings, consider an early autumn break – car hire can be much cheaper in low season (Sept-May).

Securing a self-catering spot in the Hveragerdi/Selfoss area is a good option for exploring. This puts you less than an hour’s drive from Reykjavík, and well-placed to make a loop around the craters, lighthouses and steaming pools of the Reykjanes Peninsula. The Golden Circle is easily doable from here, too (Thingvellir to Selfoss is just 50km). East from Selfoss, it’s around two-and-a-half hours’ drive to Vík, via the bridal-veil falls of Seljalandsfoss, rainbow-garnished Skogafoss and the famously troublesome Eyjafjallajökull volcano.

To get to the iceberg-strewn lagoon of Jökulsárlón takes around four hours. It’s a long drive but there’s plenty to see along the way, and the expansive daylight hours (roughly 21 hours in June, 13 hours in September) mean there’s plenty of time for exploring.

3. Best for lovers of the great outdoors 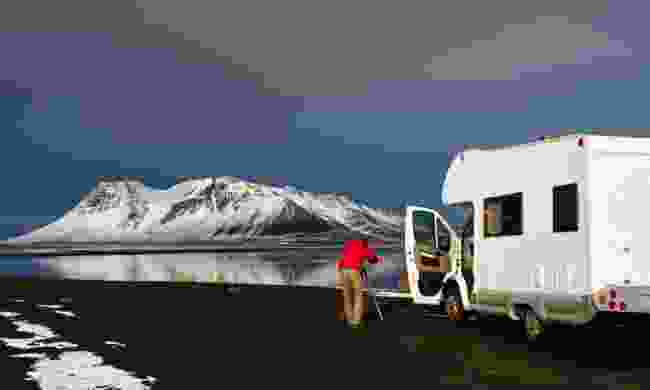 Why go: Make a super circuit of the whole country in your own house-on-wheels

When to go: April to October – the Ring Road is passable year-round but can be hairy in winter; winter drivers will need snow tyres, or should consider a 4WD.

Route 1 (the Ring Road) makes an irresistible loop around Iceland, bringing the whole country within reach. For most of its 1,300km length, it’s a two-lane paved highway, though there are some gravel stretches on the rugged east coast. However, stick to the warmer months and this epic road-trip should pose few problems for a 2WD campervan, with rentals cheaper in spring and autumn.

A camper gives you greater freedom to pause where you like and the ability to cook for yourself. You don’t need to pay for tours or waste time and fuel returning to a hotel every night. Try campervan rental companies like Kuku Campers, Camping Iceland or Happy Campers. For details of campsites, visit en.camping.info.

Although it’s possible to circle Iceland in a week, it’s much better over a fortnight. Travelling clockwise from Reykjavík, start by detouring around the volcanoes and sea cliffs of the Snaefellsnes Peninsula. Visit Myvatn’s lakes, lava flows and geothermal pools, and the nearby Dettifoss waterfall. Stop in Húsavík for potential whale spots; boat trips aren’t cheap but you might consider the chance to spot a blue whale (best June-July) well worth it.

Spend time amid the crinkle-cut coast and quirky villages of the East Fjords. Leave the Ring Road at Eglisstadir to snake over a high pass and drop into Seydisfjördur; pick up a free Historic Seydisfjördur brochure, which includes a walking tour of the town’s highlights. Next veer to Bakkagerdi, a remote hamlet in Borgafjördur Eystri, which makes a fine base for day hikes – there are over 140km of well-marked trails.

Finally, trace the south coast back towards Reykjavík, travelling via A-list (and free) natural wonders such as Vatnajökull NP and the black-sand beach at Vík. 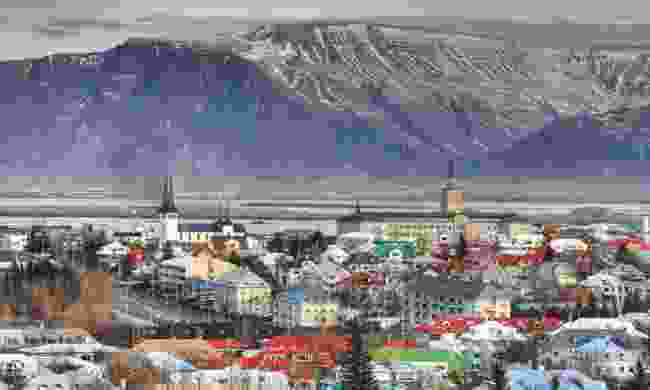 Why go? Take advantage of low-cost flights for an economical urban escape

When to go: Year-round.

Low-cost airlines like easyJet and Wow Air offer cheap return flights between the UK and Iceland, so it’s not surprising that Reykjavík is now a popular city break destination. The challenge is how to eke out your budget while you’re there. Start saving straight away by taking the bus (not a taxi) from Keflavík airport to Reykjavík, which is considerably cheaper. Getting around this compact city is easy on foot and there is also a growing network of cycle paths, with low-cost bike hire available.

Finding cheap places to stay in the city is not as simple. Located in downtown Reykjavík, close to its shops, restaurants and galleries, Hlemmur Square is a curious blend of luxury hotel and upmarket hostel – the dorm-style accommodation is within budget range. Also try Guesthouse 101, which has doubles in the budget-medium range.

For sightseeing, City Walk offers a free two-hour walking tour of Reykjavík (plus a voluntary tip for your guide), delving into viking history, folklore, food and politics at various classic and quirky sites. The Reykjavík City Card is a cheap ticket that provides free admission to several museums, as well as discounts on bike rental, whalewatching tours and eating out for 24 hours.

Striking Hallgrímskirkja cathedral is also worth a visit; entrance is free, or you can shell out a little cash for great views of Reykjavík from its bell tower. The iconic Harpa Concert Hall is a good place to warm up on a cold day. It often has free events and the ground-floor restaurant, Smurstödin, has a handy daily happy hour. There are plenty of free outdoorsy options within the city limits, too: stroll urban eden Ellidaárdalur Valley; climb Mount Esja, 10km north of the city; or bathe on Nauthólsvík beach (free in summer), where geothermal water blends with jolly-cold Atlantic.

If you're shopping, head to the weekend Kolaportid fleamarket to get the best bargains. For cheap eats, grab an iconic Icelandic hotdog at Baejarins Beztu for a few pounds. 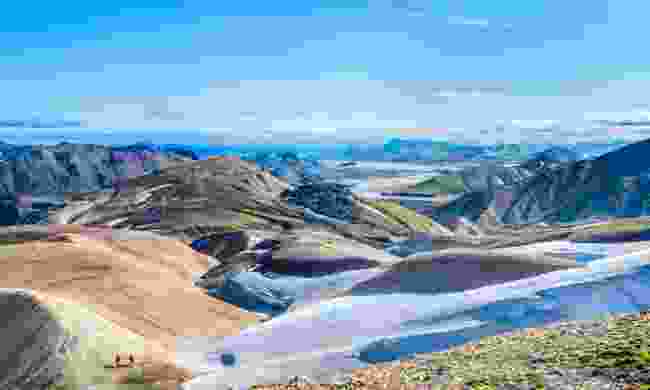 When to go: The trail is usually open from late June until mid-September, depending on weather conditions. July to August is the busiest time.

There’s no better freebie than going for a walk. And Iceland has many superb trails probing its fjord-riven coast and uninhabited volcanic interior, not least a raft of easily accessible day walks. However, the star attraction is the Laugavegur – a three-to five-day trek that snakes 55km through the southern Highlands. It links Landmannalaugar, where multicoloured rhyolite mountains rear above geothermal hot springs, and Thórsmörk, a hidden tangle of valleys and ridges surrounded on three sides by glaciers.

You can book a guided tour, including hut accommodation, food and transfers to and from Reykjavík; for this, expect to sums in excess of £1,500. However, you can tackle the trail more cheaply by going it alone. A Hiking on Your Own Passport trip with Reykjavík Excursions costs a fraction of the price, which covers bus transfers from the capital’s BSI Bus Terminal to/from the start/end of the trek. Designated campsites along the trail cost £20-30 per person per night. Huts, which have cooking facilities, basic bunks and showers cost around £60-70 per person and must be booked in advance. 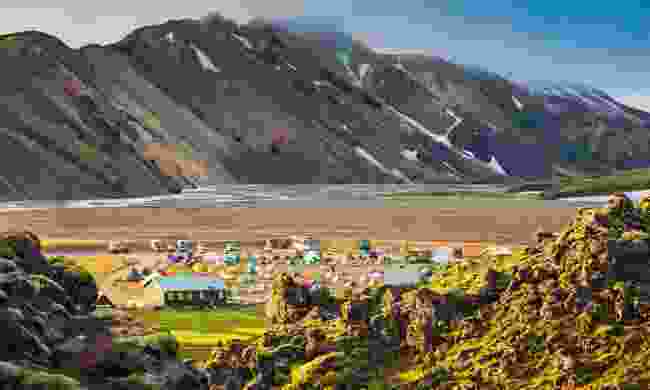 Why go? Take a tent for a low-cost exploration of Iceland’s little-visited wild west

When to go: Campsites in Iceland are generally open from May to September – but you’ll still need a three-season sleeping bag and a tent designed to withstand windy and rainy weather.

Dangling into the North Atlantic like a sea fan snagged in an ocean current, the West Fjords is a ruggedly beautiful and uncrowded corner of Iceland, its finely chiselled coastline crying out for a dawdling drive, plenty of hiking and a week or two under canvas. This will save you a fortune on accommodation and get you right out amid Mother Nature all at the same time.

The most comprehensive directory of Iceland’s 170-plus campsites can be found in the Aning Guide (free from tourist information centres). Consider buying a Campingcard; this costs around £150 for 28 days’ free camping for two adults and up to four children at over 40 campsites around Iceland, including West Fjord spots such as Drangsnes and Flokalundur. The card also confers a discount on fuel.

If you don’t own all the right gear, instead of buying it you could hire everything from Iceland Camping Equipment Rental in Reykjavík. A tent, sleeping bags, mattresses, stove, cook set, cooler box and a folding table and chairs for two adults costs less than £50. It’s a three-hour drive from Reykjavík to the West Fjords. A good choice for a first stop is the campsite at Reykhólar, which has spectacular views over the bay of Breiðafjörður.

Heading north, Thingeyri has a rich viking history, while the Tungudalur campsite, near the main settlement of Ísafjörður, is a good jumping-off point for hiking the Hornstrandir Nature Reserve. Leaving the West Fjords, don’t miss a chance to camp for a few nights at Drangsnes with its beautiful beaches and (free) coastal hot tubs.

- 5 unique ways to be inspired by Iceland

- Iceland's 5 quirkiest attractions and where to see them

- Top 5 things to do in Iceland with kids