Top 8 places in the world for landscape photography, by Charlie Waite

British photographer Charlie Waite has travelled the world, photographing unique and colourful landscapes. Here are his picks of the world’s greatest places for landscape photography, including Italy, Burm Tuscany was the first place I went to with my landscape photography hat on, having been dumped by the acting profession after 10 years. I remember my mother always saying: “You’ve got to go and look at landscape paintings. Look at the Renaissance paintings and look, in particular, at lighting”.

As a consequence of her encouragement, I made a point of looking at how painters tried to produce the most wonderful lighting scenarios within their canvasses. I took that lighting education to Tuscany. I was trying to replicate images that were reminiscent of Italian renaissance paintings. It was the lighting that did it.

There’s an area that everyone knows, with Siena, Florence, Pisa and San Gimignano. But there’s an area to the south of those places that I find more appealing, places like San Quirico D'orcia and Montepulciano.

The landscape is clay and crumbly and very, very bumpy, I describe it as like an old schoolboy’s mattress: really, really lumpy and bumpy. Of course, you can get lovely light everywhere if you hang on. But what you get here is a greater sense of dimension. Every bump has a lumpy shadow, so you have the whole business of having lumpy highlights and shadows.

The Namib Rand in Namibia is lovely, especially a place called Wolwedans. The Namib Rand is a huge desert that looks as if nothing happens there but everything does. You just have to be with your ‘antennae’, really alert and switched on, and be what I call visually agile. The moment you are receptive to what appears to be nothing actually happening, you find out that an enormous amount is actually happening. It’s just happening over a million years.

What is especially good is it’s incredibly deceptive. There was a girl from Yorkshire who looked after a particular dune lodge. She’d been there for 20 years. I said: “Could you take me to your favourite view in Namibia?’ She said: “I’ll take you to my favourite view in all of Africa.” She took me to a spot in the dark and we got there.

As dawn came up, I virtually had to change my underwear. It was absolutely extraordinary. “Can you see that distance from Point A to Point B?”, she said. I said, “Yes, it looks like a mile.” “Well, its ten miles,” she said. The most undiscovered country in Europe for landscape photography is France. I know a lot of British people go to the Dordogne, but I prefer a department called The Lot. It’s an unusual one. I never see any tourists there and I like that part of France enormously.

What’s good about that is that it’s relatively empty. As a landscape photographer, you pretty much know that you could walk down the middle of any road and you’d probably not meet a car for maybe up to 10 or 15 minutes.

That matters a lot because, when you’re doing landscape photography, one of the things that drives you mad is not being able to pause. There’s no possibility of being able to slow down to drink in and absorb the landscape because there’s always somebody in this country trying to blast you from behind. That’s a technical, practical thing: having time to pause.

The other thing that’s lovely is that it’s full of little cameos. There isn’t a lot of the ‘big, grand scene’, which I’m not really very good at, those classic, iconic images that you see all over the place, the Westminster Abbey equivalents.

I find lots of little minor pieces, if you like, perhaps not more than a couple of hundred metres wide, that you can just build a little landscape study out of. I love that. Probably the whole world is now going to Myanmar, once they have got around to being able to figure out whether to call it Burma or Myanmar, but I think Lake Inle is very good. You’re just walking into a dream.

There’s no understanding of any horizons because on the lake you don’t see any of the edges, so you’re not just floating on a boat and the whole damn thing’s floating.

If you’re lucky enough not to have any of those boats with strange tractor engines on the back whizzing by and forming a wake, you feel as through you’ve stepped into a dream world. The water is absolutely flat and very, very shallow. Lake Inle is amazing. I love Andalusia in Spain, probably for the way the farmers have unwittingly become ‘agricultural artists’. I know they’re having to grow tomatoes so that we can have them in the supermarket, but the farmers also produce beautiful geometrical patterns that I like enormously, where the soil changes in different ways and colours.

Where they plough in one direction, they plough in another in a different field. Then, they interlock so well, like a flag. The geometric shape that the farmers make, from a landscape photographer’s perspective, is very satisfying. The lighting isn’t so important there. It could be the middle of the day sometimes and it will still look absolutely great.

The coast is pretty well photographed. But there are loads of back roads where there’s pretty much nobody around, behind the coast and up in the hills, which is very good.

Yorkshire gives me an enormous amount of pleasure. You get a great sense of history in Yorkshire with the dry stone walls and the rough, tough Yorkshire people who have to withstand some pretty tough weather. I don’t know if it’s EU grants that have made those barns beam, so beautifully restored, but the dry stone walls of the Yorkshire barns are really hard to beat.

I find Britain so cramped and Yorkshire is a little nugget of landscape that’s not really very big, but a lot of people bypass it on their way to Scotland.

Talking of geometry, I especially like the Yorkshire Dales, the hills and the shapes. A dry stone wall in the middle of the day can yield a shadow of about a foot. But at the end of the day, you’ve got a 40-ft rock shadow that delineates the landscape very beautifully. A place like Swaledale is pretty hard to beat.

People say Scotland is a landscape photographer’s Mecca. I’m not sure it would be for me, because it can just become formulaic if people always go to the same place.

But I have to say that Glen Coe is a pretty butch landscape. You’re always at a good time visually and from the point of aesthetics and so on. If you want foreboding and a sense of threat, you could stand under a mountain in Glen Coe. You think the McDonalds are going to be appearing every minute, not that I know much about Scottish history… 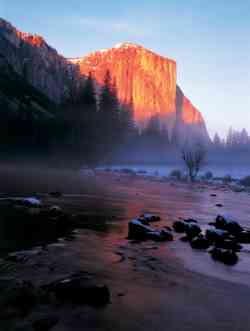 I could choose Death Valley or the Slot Canyons in Utah in the United States. But, even though it is well-visited, Yosemite National Park is still jaw-dropping stuff.

I know Ansel Adams was there 50 years ago doing his thing and it’s the most visited national park in the world, but if you get there, it becomes yours.

People think Ansel Adams is a bit passé, but he was an amazing artist and technician rolled into one. He had great lines about “recognition and pre-visualisation blended together in a single moment of awareness.”

He could pre-visualise an image before he got the camera out, so he defined landscape photography in a way that still resonates through a lot of landscape photographers’ minds. His technical approach and artistic sense of judgement was really second to none.

A lot of people say that those days are gone now and we should move on. But I still love to photograph Yosemite. It’s such a small national park; if you get an aerial image of it, it would just be the size of your thumb. But there’s so much there to see.

Charlie Waite is also the founder of Light & Land, who arrange landscape photography tours, holidays and workshops in the UK, Europe and around the world. For info, see www.lightandland.co.uk.