With incredible wildlife, epic history and delicious food, Alderney isn't even the largest of the Channel Islands, but it's starting to make a big splash with visitors...

A voice hissed from the dark: "Quick! They have found one up ahead" We turned our torches away from scanning the undergrowth and strode up the hill towards the silhouetted figures, anticipation rising. Reaching the spot where the guide was waiting, we formed a silent semicircle as she switched on her torch to finally reveal our quarry: a little blonde hedgehog. Not that the hedgehog was thrilled to see us. It scurried off, across the fairway of Alderney Golf Club and into a bush. It was only a brief encounter, but at least we had seen one of the island's most famous residents.

Alderney is the most northerly of the Channel Islands, measuring just eight square kilometres, and probably the least known. Indeed, when I told people where I was heading, the usual response was to look perplexed and ask if it was in Scotland. Yet nature lovers are slowly catching on to Alderney's delights, with its heady mix of beautiful landscapes, fascinating wildlife and good places to eat, drink and stay.

The hedgehogs are certainly flourishing in this environment. As non-natives to the island, local folklore has it that the first pair (or pairs) were purchased from Harrods in the 1950s, which was then known for its exotic pet department, and brought over in a bag to be released in a garden. The blonde colouring is due to leucism, a partial lack of pigmentation. This would usually be a disadvantage for a small mammal, making it more obvious to predators. But Alderney is a paradise for hedgehogs, as it has no foxes, badgers or weasels, and the blondes now outnumber the brunettes. Here, it really is the blondes who have more fun. 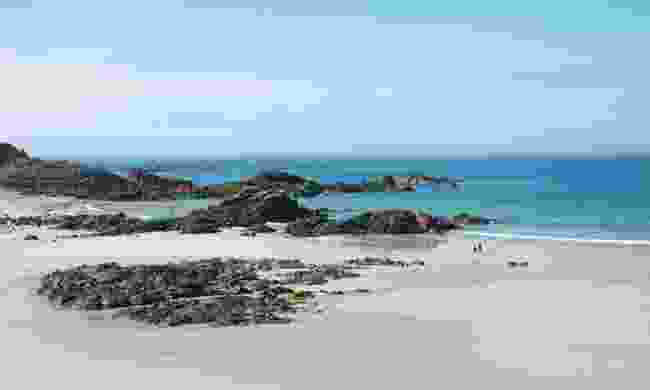 It's not only the hedgehogs that have fallen for Alderney's charms. "I came here in 1988 for a weekend and never left," taxi driver Nick explained when he picked me up on my first morning. "That's what happens. It might happen to you."

It was a foggy morning and Alderney's fabled coastal views were just a blur. But as we drove down quiet lanes, no traffic in sight, Nick extolled the benefits of an island where parents could let their kids run wild on empty beaches, knowing they would come to no harm. "It is so safe and crime-free here that I don't know where my front door key is, as I never use it," he volunteered eagerly.

There is a freedom here, too: "Oh, you don't need to do that up," Nick said, as I automatically reached for the seatbelt. "They are not compulsory and there are rarely any accidents anyway."

That was easy to believe as the speed limit is only 35mph, not that speeding would be likely anyway, as another resident had already told me how relaxed I would find everything. "We have clocks here with 'ish' on them: 2ish, 3ish, 4ish..."

Alderney had been working its charms on another visitor, I learned, who was also now plotting to stay. Nick had dropped me off at the newly set up Bird Observatory and Field Centre, and it was here that I was met by volunteer warden John Horton.

Alderney lies on two major migration routes, with a funnel effect meaning many of the birds heading from France to the UK stop here to refuel, John explained, with nearly 50 times as many birds using Alderney to reach other parts of Europe, such as Belgium, the Netherlands and Poland. There are nearly 300 species on the island's bird list, which is still growing. 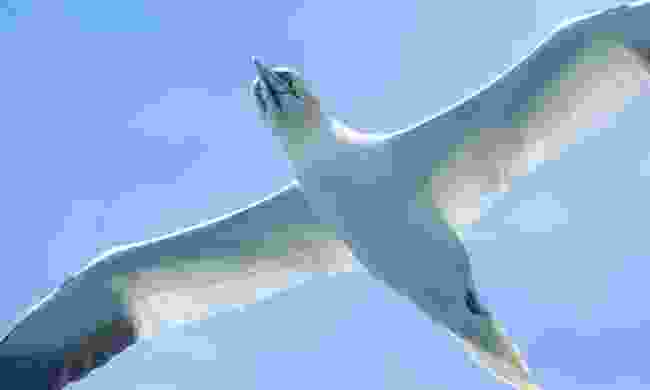 "I feel very privileged to be here," said John, explaining that he had taken a sabbatical from his job in the wildlife crime unit of the Met (London Metropolitan Police) to set up the observatory, which is based in a building known as the Nunnery. "Not that there's any evidence that it ever was a nunnery," John explained, a twinkle in his eye. "Being a natural harbour, it is more likely that it was originally an inn. In the Napoleonic Wars, it was a field hospital, but Napoleonic soldiers also used to call brothels 'nunneries' as slang: "I'm just off to the nunnery," they'd say, so that is a more likely explanation of how it got its name."

Strategically positioned between Britain and mainland Europe, Alderney has been heavily fortified throughout its history and is covered in Napoleonic and Victorian forts and barracks, quite often with German-built concrete machine gun nests on top. This building looked unexceptional, but John then pointed to the high wall surrounding us. "The Nunnery was a German base during the Second World War, known as Piratenschloss (Pirate Castle), and when the Germans left, it was leased out for 50 years," he recounted. "The walls were covered in ivy, but when it was cleared they found a Roman wall underneath."

John showed me where archaeologists had uncovered evidence of the front of a tower. It had been a Roman signal fort, built in the 4th century, and overlooked the only natural harbour on the island. Leaving it behind, we took steps up to the top of the wall and looked out into the fog, which was as thick as ever.

"Down there is Longis Bay, and, believe it or not, France is just there," pointed John, as I peered into the murk. Suddenly, I realised its proximity was why the Romans and Germans fought so hard for it. 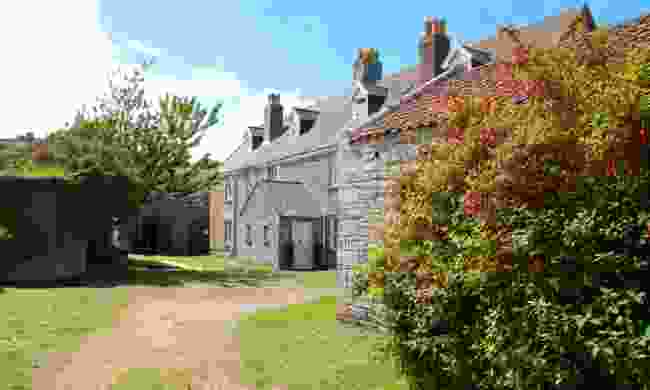 History is everywhere on Alderney, with much of it still recent and raw. Later, I was shown around the main house at the Nunnery. The plan is to refurbish it to provide holiday accommodation, but even here you don't have to go far to the see the legacy of the Second World War.

"See the edelweiss over the bunker door?" pointed John. "If you were an elite German paratrooper, you wore an edelweiss, or it could be a sign that Austrian troops were stationed here. The bunker is also the only one on the island with war-era camouflage still on its walls and its original gun mountings."

The bunker was just one of more than 600 on the island. The Germans arrived on July 2, 1940, just nine days after Alderney had been almost completely evacuated, its population of 1,500 queueing at Braye Harbour to leave, taking just one suitcase each with them.

Towards the end of 1941, Hitler ordered the Channel Islands be made into an impregnable fortress as part of his Atlantic Wall network of coastal fortifications, both to prevent an Allied invasion and also for the propaganda value. Although considerably smaller than Guernsey or Jersey, Alderney was the closest island to Britain, hence it being fortified to a far greater degree. Slave labourers did the construction, including Russians, Poles and Jews. Records were not kept but it is believed there were about 5,000 of them and that more than 500 died.

When the islanders were allowed back in late 1945, the devastation was shocking. The majority of the properties were derelict and everything of value was gone. Most of the wood from the houses - doors, floorboards, window frames... - had been used as fuel.

On Guernsey and Jersey, much of the population had stayed and most of their businesses survived. But Alderney had to start all over again, including reintroducing farming. The island's museum may be small but it packs a mighty punch, as it explains the hardships and post-war politics involved in getting the island back on its feet again.

A volunteer there struck up a conversation with me, and it transpired that she was another recent newcomer. "I moved here two years ago, and it was like stepping back into 1950s England. The shops close on Wednesday afternoons and Sundays, and for an hour at lunch. But now, when I go to the mainland, I find it too busy, too noisy, too many cars!"

Take a walk along the cliffs, she advised: "All you can hear is the sea and the birds." But I had plans to get closer to the action than that. 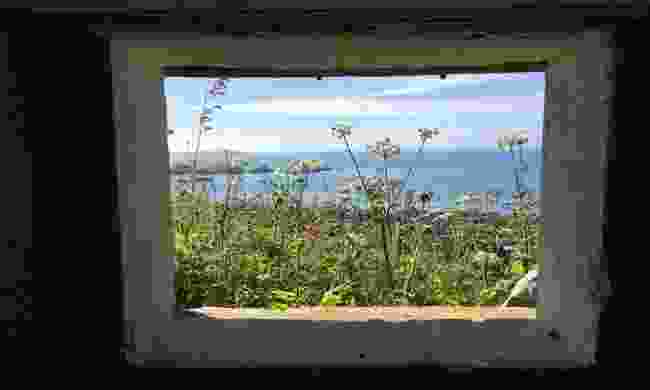 Alderney is known for its summer population of, arguably, Britain's most adored bird, so I took a boat trip out from the harbour and headed towards the small island of Burhou, where we soon came across hundreds of puffins bobbing in the water.

"They're conserving energy," said the guide. "And if you're wondering: the collective noun for them is a 'circus' of puffins." Oh, how that factoid made my heart sing!

"There are lots of chicks, known as pufflings, right now," she said, as we scoured the grassy slopes of Burhou with binoculars. But they were safely ensconced in their burrows, and the only movement we saw was that of a few hopping rabbits. We all vowed to later watch the live webcam that operates on the island.

If the adult puffins were just hanging out, Alderney's other famous seabird visitors were putting on more of a shock-and-awe display. We could see some activity in both the air and the sea, and soon realised it was dozens of gannets torpedoing into the water at 100 kilometres an hour. The largest seabird in the North Atlantic, their wingspan is up to two metres. But considering their speed and size, the splash they made was relatively small, and we were left to imagine them chasing the fish underwater like a heat-seeking missile.

Around 16,000 northern gannets (2% of the world's population) call these waters home from the end of January to October. As we neared Les Etacs (known as 'Gannet Rock'), we could see it pulsing with life. It was a remarkable sight, and just half a kilometre off Alderney's west coast.

Back at the lovely Braye Beach Hotel on the mainland, the outside terraces were almost as busy. After a couple of days of murk, the sun had come out, and it felt as if half the island were basking in its rays. Gone were the party of opera singers who had put on a performance as part of Alderney's Performing Arts Festival, only to be stranded by the fog. I had chatted to one of them at a little festival at the harbour.

"I don't call this a hardship," he'd laughed, tucking into a lobster roll and waving at the boats. "There's far worse places to be stuck."

Taxi driver Nick drove me to the airport early the next morning. I'd had a final walk on the pristine pale gold sands of Braye Beach, just as another atmospheric bank of mist had started to roll in.

The best place to stay on the island is the very welcoming Braye Beach Hotel (www.brayebeach.com, 0800 280 0550), overlooking Braye Beach and ten minutes' walk from town.

Alderney is 15 minutes flying time from Guernsey. Flights from London Gatwick to Alderney via Guernsey are available with Aurigny (www.aurigny.com, 01481 822886) and take around 2.5 hours.

For more information and ideas for holidays in Alderney, as well as travel inks, see www.visitalderney.com/stay/travel.