Central America trip planner: 4 of the most exciting routes

Whether you’re channelling your inner Indiana Jones in ancient temples or spotting wildlife in lush rainforest, plan the perfect trip with these stunning routes through Belize, Costa Rica and beyond... Best for: A taste of Central America

Why do it? Because you want to pack all you can into 10 days without feeling rushed. 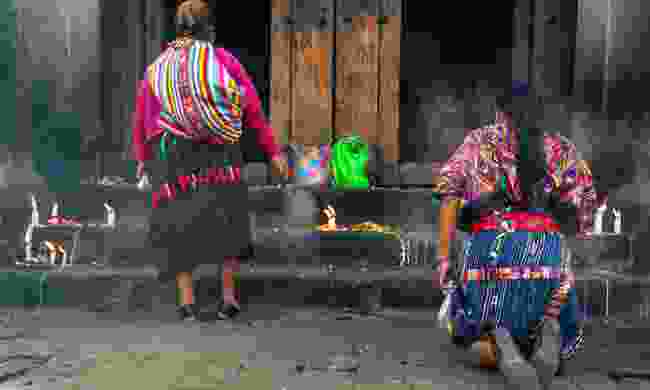 Short on time? Belize and Guatemala offer the best combination for a whistle-stop trip. And it won’t feel like a rush. Belize is tiny (packing jaguar-filled forests, coral cayes and wild wetlands into an area less than a third of the size of Scotland), while Guatemala has the pick of Central America’s romantic ruins and colourful markets. Take a morning side trip to either Chichicastenango or Sololá village markets, where Mayan villagers pour in from the highlands to sell delicately embroidered huipil shirts, woven shawls and festival masks. Then fly to Tikal for those pyramid-top forest views (be sure to visit at dawn or sunset). A monkey in Belize (Shutterstock)

It’s only a short two-hour hop across the border from Tikal into Belize. Travel with Adrenalin Tours, then base yourself at the Black Orchid resort (pick-ups are from San Ignacio), where there are wild howler monkeys in the hotel gardens, toucans in the trees and all Belize’s key attractions are within easy reach.

Black Orchid offer a huge choice of day trips throughout the country – from fly-fishing, diving or snorkelling on the Belize Cayes to boat trips to the remote Lamanai ruins, set in pristine rainforest on the shore of a crocodile- filled lagoon. Fly back from Belize City, or for a bit of Caribbean beach, add on a few extra nights in San Pedro on Ambergris Caye. Best for: Wilderness and Mayan sites

Why do it? Because you have time to spare and want to see as much of the region as you can – on and off the beaten track. 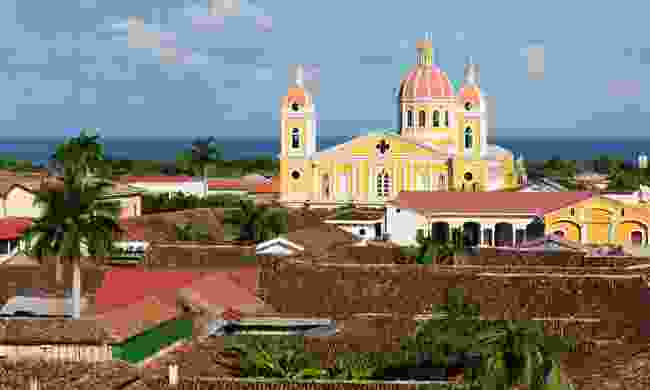 Prepare to get wet. The quickest way in to Pacuare jungle lodge in the Costa Rican rainforest is by whitewater raft – on a rushing river that cuts through a deep canyon in the heart of a pristine private reserve (bags take a dry route).

You’ll need two nights to take in the trails and abundant wildlife. Then transfer to the coast (around three hours) for two more days boating around the crocodile-filled rivers and turtle nesting beaches of Tortuguero NP.

Climb the steep stairs to the cathedral roof for a view over tumbling terracotta and streets of ochre and whitewash to Momotombo’s smoking cone. Then ascend the ash slopes of Cerro Negro itself for sunset vistas over an avenue of volcanoes extending into El Salvador. That country is a two-hour journey away – reached on a boat across the dolphin-filled Golfo de Fonseca, a vast bay dotted with tiny fishing villages. Jiquilisco at the northern end is protected as an internationally important wetland reserve.

After a night here, cut inland to Suchitoto, a pretty village near the Honduran border. You’ll pass the Mayan Pompeii – Joya de Cerén, a pre-Colombian village fossilised by volcanic ash over 1,400 years ago. Then make for Antigua in Guatemala – the most beautiful Spanish cathedral city in Central America – and the craft markets in Chichicastenango and Sololá. The Grand Plaza in Tikal (Shutterstock)

Why do it? For a mix of the best Mayan sites, wildlife spots and stays in modern Maya villages. A jaguar in the rain forest of Belize (Shutterstock)

A ruined Mayan city where guests can stay in comfort and see jaguars, spider monkeys and ocelots? It exists – at Chan Chich in the heart of El Petén, Belize and Central America’s largest forest.

You’ll need at least two days here, after which it’s a few hours’ drive to San Ignacio – where there are small Mayan ruins in the centre of town, and huge ruins a 90-minute drive away (by 4x4) to the east at Caracol. This vast pyramid-filled ruined city in the rainforest sees more toucans than tourist visits, making it one of the few major Mayan site you can have pretty much to yourself. Tikal, the most impressive of all Central America’s Mayan ruins, is across the Guatemalan border from San Ignacio. Fly from here to Lake Atitlán (via Quiché Airport), a shimmering blue volcanic lake ringed with mountains and dotted with modern Quiché Maya villages. Stay with a local family through Pure Tours, shop for colourful handicrafts in the local markets, and then leave for Antigua. A carved face in Copán (Dreamstime)

Transfer from this small city to Suchitoto in El Salvador for Joya de Cerén, where you can take a long day trip or overnight stop to Copán across the border in Honduras.

With vast temples and corridors of  rooms – as well as four-metre high stele slabs decorated with rather eerie, elongated faces of priest-kings, surrounded by a rococo filigree of swirling foliage and hieroglyphs – Copán is one of the most spectacular sites of all and a fitting end to a journey through the Maya World. A quetzal in flight (Shutterstock)

Why do it? For Central America’s best wildlife watching with beautiful beaches and unspoilt reef thrown in. 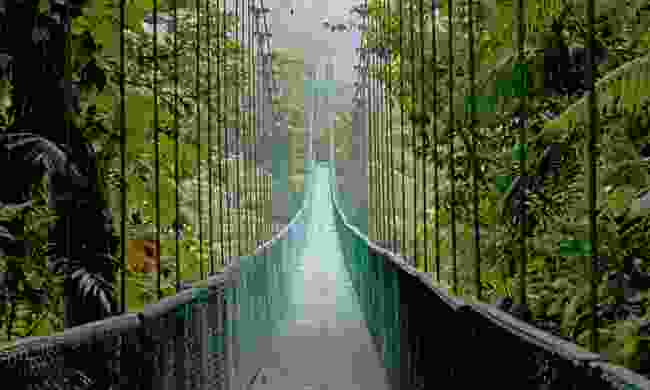 A hanging bridge in the Monteverde Cloud Forest (Shutterstock)

It’s an easy three-hour drive from the airport in Costa Rica’s capital San José to Arenal – a perfectly conical volcano flowing with hot springs and shrouded in forest. Take two days to wander Mistico Park's canopy walkways to spot birds and monkeys, trek the trails to the myriad waterfalls and soak in the hot volcanic rivers.

A scenic two-hour journey then takes you from the volcano to the Monteverde Cloud Forest Reserve, where trees are covered in bromeliads, orchids and lichens. Opalescent resplendent quetzals float from branch to branch as silently as falling petals and margay cats pad along the mossy paths. Sunset on a beach in Corcovado National Park (Shutterstock)

Allow at least a day before flying south (via Puntarenas Airport) to Bahía Drake for Corcovado National Park. This is perhaps the best location in Central America to see large mammals. Jaguar, puma, ocelot and endangered Baird’s tapir all live here, alongside metre-tall harpy eagles (which pluck sloths from trees).

Aim for around two days in Corcovado before spending the last part of your trip in Panama’s San Blas archipelago. These tiny Robinson Crusoe islets are fringed with pristine coral reef. Accommodation is simple and there’s little to do but snorkel, sunbathe and spend time with the local indigenous Kuna people.

Plus… the writer’s own route 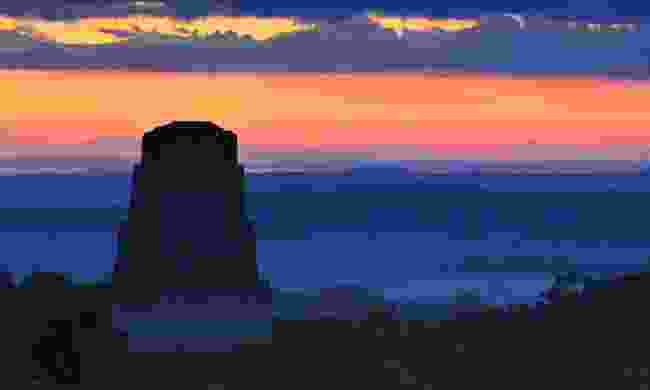 Some memories will never fade... Late afternoon. A path at Tikal in the Guatemalan rainforest. A shimmering-blue butterfly as big as a handkerchief floated out of the shadows into a beam of sunlight. Spider monkeys rustled in the tree canopy.

Looking up, I met their pebble-dark, peering eyes, as curious as a cat’s. The trail brightened ahead – opening onto a grassy square surrounded by towering stepped pyramids. Each was topped with a small platform, and a single cave-dark chamber decorated with an elaborately carved roof comb.

I followed the path behind one of the temples. It climbed steeply up the building’s back – which was covered in an Indiana Jones tangle of roots and vines. I pulled myself over a piece of ancient, tumbled masonry and hauled myself up. By the time I reached the top I was sweating, out of breath and transfixed by the view. After the closeness of the forest, all was space and light on the temple top. I was above the canopy. The bright sun was buttery yellow and sinking over endless trees – which stretched green and semi-silhouetted to every horizon. A toucan perched a few feet away on a moss-covered kapok branch. A pair of scarlet macaws cawed and cooed and flew off in a clamour. An eagle soared.

As the sun fell it deepened into orange, then dropped red behind the tree line, leaking colour into the sky. The day thickened into tropical twilight. And a chorus of tree frogs and crickets serenaded a full moon, which rose to the north-east – yellow in a violet sky. Central America floods my mind with memories. Dawn over the smoking volcanoes of central Nicaragua. Iridescent quetzals in Costa Rica’s misty cloud forests. Snorkelling over a stingray and turtle-filled sandy alley, cut like a valley in Belize’s barrier reef. I can hear the bustle of street markets and marimba music.

And smell roasting coffee, mango blossom, the heavy perfume of the rainforest, the copal-scented air in the mystical Mayan mountain temples.... And from far away they draw me back to Central America. Inevitably.

5 of the best routes through Peru

How to plan the perfect trip to Chile