Tu-whit, tu-whoo! 5 adorable British owls and the best places to see them

No other species of bird captivates us like owls - our mysterious and wise old friends. John Lewis-Stempel explains their magic and reveals where to find them The barn owl is the ghost caught in the car headlights, the sci-fi orb which floats across the field. It is an owl of open, permanent pasture and the woodland margin. The large wingspan allows the bird to cover immense territory: 250 acres or more a night. Perhaps the noiseless flyer, the barn owl’s downy edge feathers caress the air into complicit silence. Patrolling is punctuated by rests on posts, fences, trees. When the ear or the eye detects the presence of prey, the owl may hover, kestrel-style.

Barn owls tend to hunt from dusk until about 2am, with a secondary bout of stalking around dawn. The timing of the hunt is far from random; it connects to the activity pattern of the wee timorous beasties on which the owl preys. More than 90 per cent by weight of the barn owl’s diet consists of mole, eld vole, bank vole, common shrew, pygmy shrew and wood mouse. Birds, frogs, toads and bats comprise the rest.

Breeding barn owls very often choose to nest in farm buildings, hence the name. Other sites include ruined buildings and hollow trees. Their liking for church towers led them to be called ‘cherubim’ in some parts of the country, ‘church owl’ in others. They are devoted to tradition, and will use the same locations for years. Nowadays they take readily to nest boxes. As with the other British owls, the breeding season is March–April, but the barn owl (along with the short-eared species) can produce a second clutch.

A survey carried out between 1995 and 1997 produced a national estimate of c.4,000 pairs, down from about 12,000 pairs in 1930. Conservation work seems to have stabilised the population. Three-quarters of barn owls now live in man-made nesting boxes. This is Britain’s best known, most determinedly nocturnal, most abundant owl - though it is curiously absent from Ireland and the Isle of Wight. This is the owl after which Brownie troop leaders are named.

The tawny owl is, indeed, tawny – a definite brown, but richly mottled to resemble the trunks and boughs of its arboreal heartland. (The bird’s old country names include ‘wood owl’ and ‘beech owl’.)

The tawny is more often heard than seen. The autumnal territorial howling of the male begins in late September once the birds have completed their moult, and the calls increase in frequency until December. The male tawny who has failed to establish a personal fiefdom by late winter, either by superior fighting or calling, is a tawny doomed. The owl will hold his manor until he dies. To maintain territory tawnies will attack trespassing owls – and even foxes and dogs, not to mention humans. Eric Hosking, the famous photographer of birds, lost an eye in a tawny attack. He titled his autobiography An Eye for a Bird.

Despite a preference for deciduous wood and thicket, the tawny is adaptable enough to make a home in mature gardens and parkland, meaning that it is the owl most likely to be encountered in the cityscape. The tawny makes its living from small mammals and birds, large insects and frogs. Such unfussiness over the menu is a reason for the bird’s relative commonness. There are about 20,000 pairs in the United Kingdom.

Like all owls, the tawny is no great home-builder. By choice, the tawny will nest in a cavity in a hollow deciduous tree, preferably wrapped with creeper (which accounts for another country name, ‘ivy owl’), with the female scratching a desultory scrape in arboreal debris. 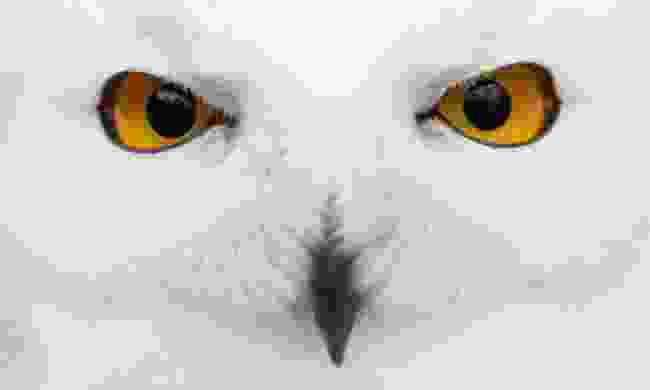 The snowy owl can only be claimed as a British owl because of the birds which bred on Fetlar (Shetland Isles) between 1967 and 1975; in the winter of ’76 the male disappeared and breeding stopped. And white beauty was lost from the landscape.

Today, the snowy owl is merely a visitor.

Ice-white, frost-white, the snowy owl appropriately inhabits the Arctic tundra. The near-perfect camouflage means that the snowy owl – also known as the snow owl, or Arctic owl – is often revealed only by a glimpse of its piercing lemon-yellow eyes. The bird’s occasional trips south to Britain are caused either by the bitterness of winter in their breeding grounds, or by ‘irruptions’, crashes in the numbers of the small mammals upon which it feeds. Snowy owls seeking refuge in Britain rarely wander below the Cairngorms. South of the mountains is too warm for snowy owls, even in bleak midwinter.

The adult male is unadulterated white, but youngsters and females are barred and spitted with dark grey or brown (thus camouflaging them in the spartan scrape on rocky ground snowies call a nest). The yellow eyes are ringed with black kohl. Snowy owls rarely perch, but sit to attention on high ground, where they droop their wings, puff out their feathers and lose all bird shape. With a body length in excess of 50cm, the squatting snowy owl resembles a pale, plump cat. On Shetland, the bird is called the ‘catyogle’; its felineness is said to frighten cows into producing bloody milk.

From their vantage point, snowy owls swoop, utter and pounce on prey in a snowstorm of death. But the white terror of the north can also quarter, hover and even glide in, buzzard-fashion. Lemmings, voles, rabbits, and ptarmigan, wader and seagull chicks are staple foods. (The bird has the ability to regulate clutch size according to the preponderance, or not, of prey.) Snowy owls are daytime predators, necessarily so in an environment where it is light for twenty-four hours in summer. A little owl about to perch on a shovel (Dreamstime)

Little owls were first introduced to Britain from Continental Europe by the Yorkshire naturalist Charles Waterton in 1842. Unfortunately, his habit of giving the birds a warm bath before release led to most dying on the spot. The rest of the freed birds disappeared, never to be seen again.

The first successful introduction was by Mr E. G. B. Meade-Waldo at Stonewell Park, near Edenbridge in Kent, in 1874. The Stonewell Park birds spread throughout the South East, and another enthusiast, Lord Lilford, established the species in the Midlands. The immigrant status of the bird was attested by the foreign place names given it, including ‘Dutch owl’, ‘French owl’, ‘little Dutch owl’.

The bird is, overall, brown in colour with pale and white patches, including frowning eyebrows. When approached at its roadside station of a fence post (for a bird the size of a thrush it sits cockily conspicuous) the little owl will wag its tail and curtsy in a quite manic manner.

The eyes are clear yellow. This is a bird of copse, hedge and orchard; slow, beefy, contented countryside. The failure of the little owl to colonize Scotland suggests that its breeding range is limited by climatic conditions, and it cannot tolerate the cold, the wet, and the snow above Hadrian’s Wall.

The national population is around 4,000 to 8,500 breeding pairs, according to a study carried out by the British Trust for Ornithology and the Hawk and Owl Trust in the 1990s. Like the tawny, the little owl is ardently territorial on a year-round patch. 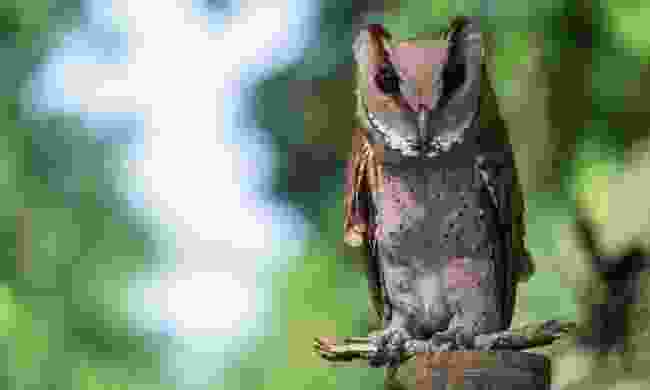 The short-eared owl is a bird of open, wet country. It flies by day as well as by dusk and by night, and is one of three British owls which hunt by quartering (the others being the barn owl and the long-eared owl). Thus it has relatively long, broad wings, which grant it a distinctly assured, cruising flight in which the bird can turn without stalling.

Voles make up to 83 per cent of the short-eared owl’s diet, and it has been calculated that a single bird may eat as many as 6,000 per annum. Where voles do not occur, neither do short-eared owls (thus their absence from Ireland). Periodically, vole plagues break out in hill country, and then the short-eared owl may raise two broods in a season.

Wintering short-eared owls are highly nomadic, and will sometimes congregate on lowland grassland, marsh and fens; a communal roost of 116 birds was found in Norfolk at Christmas in 1972. The numbers of British short-eared owls are boosted by autumn migrants from Scandinavia.

Short-eared owls nest on the ground, usually in tall heather or long grass. Breeding numbers seem to have declined considerably in recent years, more so than other owl species. There are about 2,000 pairs of short-eared owls in the UK, the majority in Scotland. The short-eared owl’s predilection for harsh terrain means it was almost certainly one of the first Strigidae to colonise Britain following the retreat of the Ice Age glaciers. So, the short-eared owl has been in Britain longer than humans have.