As well as singing tracks from his latest album, Believe, and his 1996 hit Time to Say Goodbye, Andrea Bocelli sang songs from the Greatest Showman, Carousel and Puccini favourites as millions across the Middle East and North Africa region (MENA) watched live on MBC1 and the artist’s YouTube channel.

Bocelli shared the stage with his son Matteo and his nine-year-old daughter Virginia for the first time as they sang a duet of Hallelujah. He was also joined by the Arabian Philharmonic, the American singer-songwriter Loren Allred and soprano Francesca Maionchi, with Eugene Kohn on the piano.

The concert marks the third year in a row that Bocelli has performed in the ancient region of AlUla after performing at two Winter at Tantora festivals, but it was his first time at the historic desert city of Hegra. 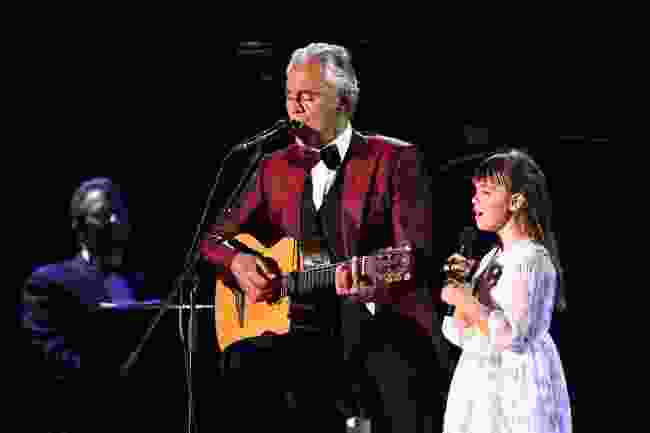 Hegra is the most well-known site in AlUla, which is 1,100km from the capital of Riyadh in the north west of Saudi Arabia. Built by the Nabataeans – the people behind Jordan’s Petra – Hegra features 111 well-preserved tombs, many of which feature elaborate facades cut out of local sandstone.

AlUla is also home to Hegra Fort, the remains of the Hijaz Railway and hundreds of outdoor inscriptions at Jabal Ikmah. The 900 mudbrick homes in AlUla Old Town, which date back to the 12th century, are another highlight, as is a visit to the old capital Dadan, which dates back to the first century BC.

‘To be here, creating a piece of history in such an inspirational setting so rich in human ingenuity, heritage and culture, is truly a moment we will never forget,’ said Bocelli. ‘Our planet is beautiful and music is the world’s great unifier, so this moment for us has been about spreading a little joy as we all see the light at the end of the tunnel and look forward to enjoying music together again soon.’

The Wanderlust guide to Saudi Arabia

Levison Wood: "Arabia feels so remote and exotic, but it also feels quite homely"