Billy Bragg: “It’s an amazing way to see a country.”

What was the idea behind your 2,728-miles rail journey across the United States?

The idea was to reconnect with the traditional railroad songs in America, of which there are multitudes.

The railroad had a massive effect on the lives of ordinary Americans. Between 1850 and 1950, it was the main mode of transport. This was also the time when popular music arose in the US, and railroad songs were a crucial part of that.

Railroad songs were often a metaphor for something; you had songs about parting or aspiration, just getting on the railroad and going. In the UK, traditionally, if someone wanted to get away from a failed love affair or a difficult situation, they’d take to the ocean. 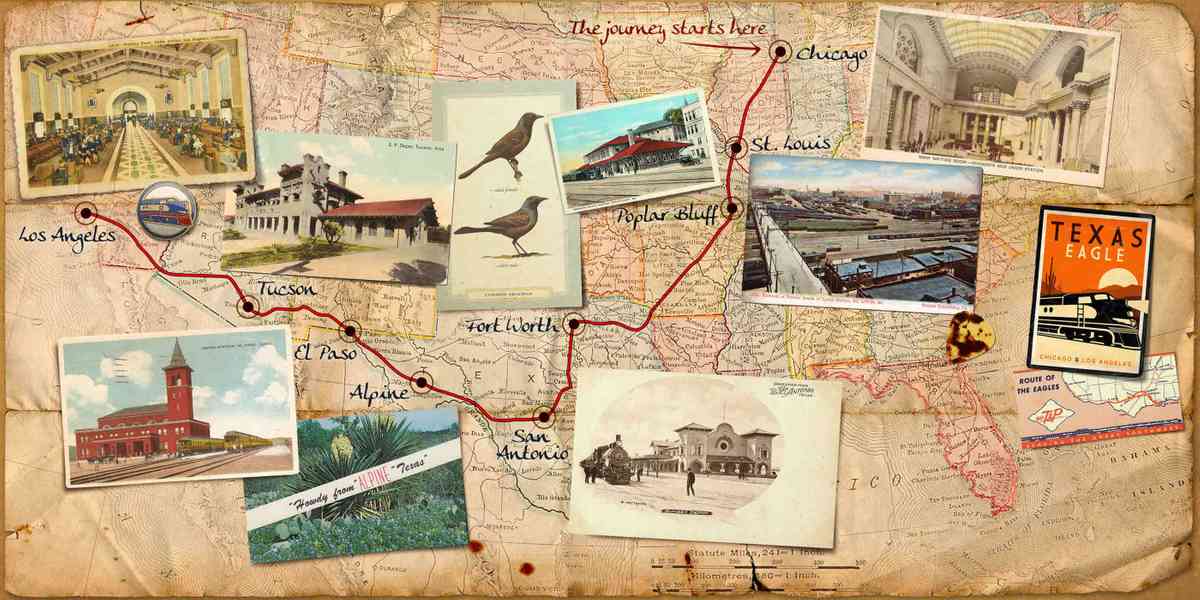 Well, there’s that, too. But in terms of journeys...

When I was in school, all the old folk songs were about sailing, sea shanties. In America, railroad songs take that role. So Joe Henry and I set out to make this album, Shine A Light, that revisited those songs. Rather than record songs in a studio, I thought it would be much more interesting to take the songs back to where they came from, so we recorded at stations and other stops along the railroad.

Where did you start and end?

We started at Union Station in Chicago and went all the way down to Los Angeles. Chicago’s the big hub of the American railroad.

There’s a couple of ways of taking that trip. The route we chose goes due south into Texas and then follows the Mexican border, which is a similar shape to Route 66. The key reason for us is that it went into the American heartland and it’s the longest route, so it gave us more opportunities to record. 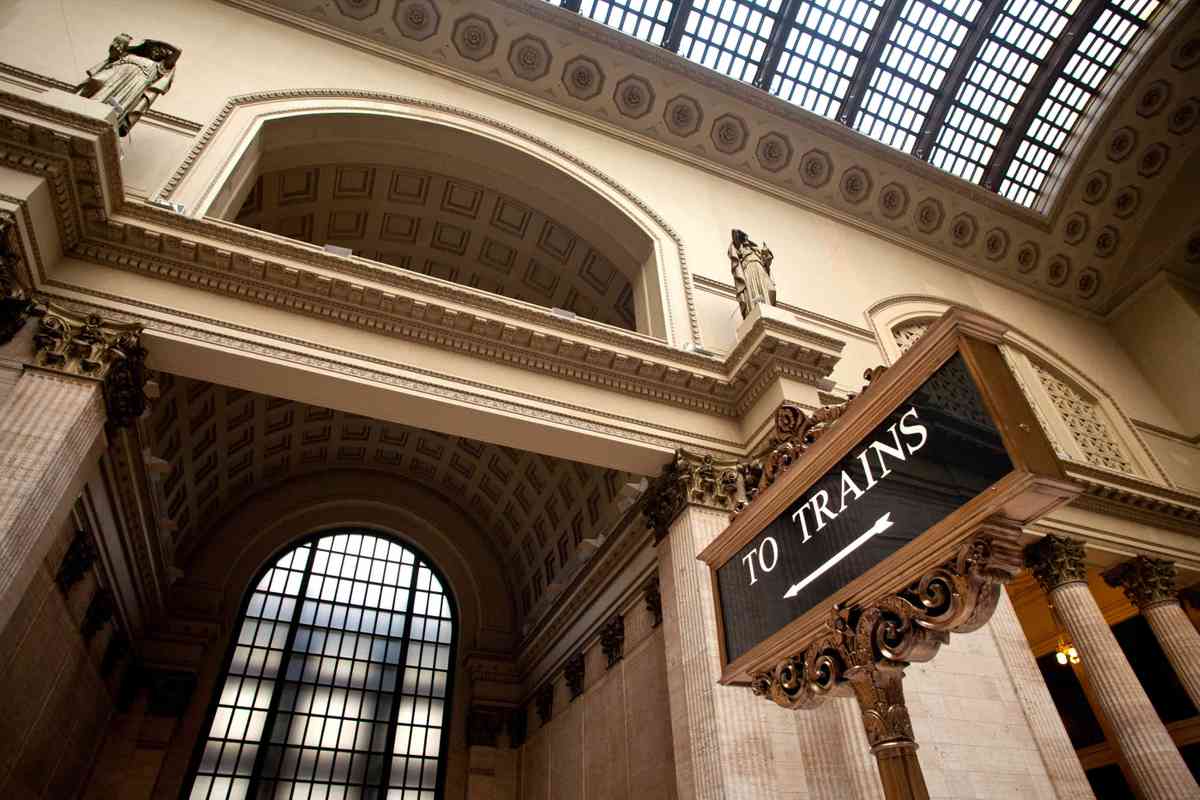 Is there still a romance to rail travel?

In America, there definitely is. I’ve been going to America since 1984, mostly to tour. I’ve seen a lot of the country, but predominantly from eight miles high on planes or on the freeway.

As they come into towns and cities, the trains move slowly through what they call the ‘edge-lands’, before the city starts and the countryside stops. It’s the kind of areas where there are trailer parks and abandoned buildings. Often the railroad is in the old part of town, where the centre of town isn’t there anymore. The centre has moved.

The railroad goes to places that were important when it was built, often around the 1880s and 1890s. In some ways, you’re going back in time.

So, you got to see another side of the country?

It’s a different perspective. It’s a part of America that I’d never seen.

The second leg followed the Mexican border for a long way. It’s mostly desert along there. The conditions the people who built the railroad must’ve worked in… You have to take your hat off to them. It was built mostly by hand. You just have to look at the environment and marvel at the audacity of the Americans to do something like that, to cross a continent.

In El Paso, you could stand on the platform at El Paso Union Station and throw a stone into Juarez, Mexico. It’s that close. When we pulled out of El Paso, you could look out on one side to the suburbs of El Paso, all neat and everyone’s got a pick-up truck, and then you look to your left into Juarez and the outskirts look like The Good, The Bad And The Ugly. On the back of that, we talked a lot on the trip about Trump, because this is the place where his wall would be. We also went to a lot of places where Trump is popular, down the Mississippi Valley, across Arkansas, into Texas. These are the heartlands. 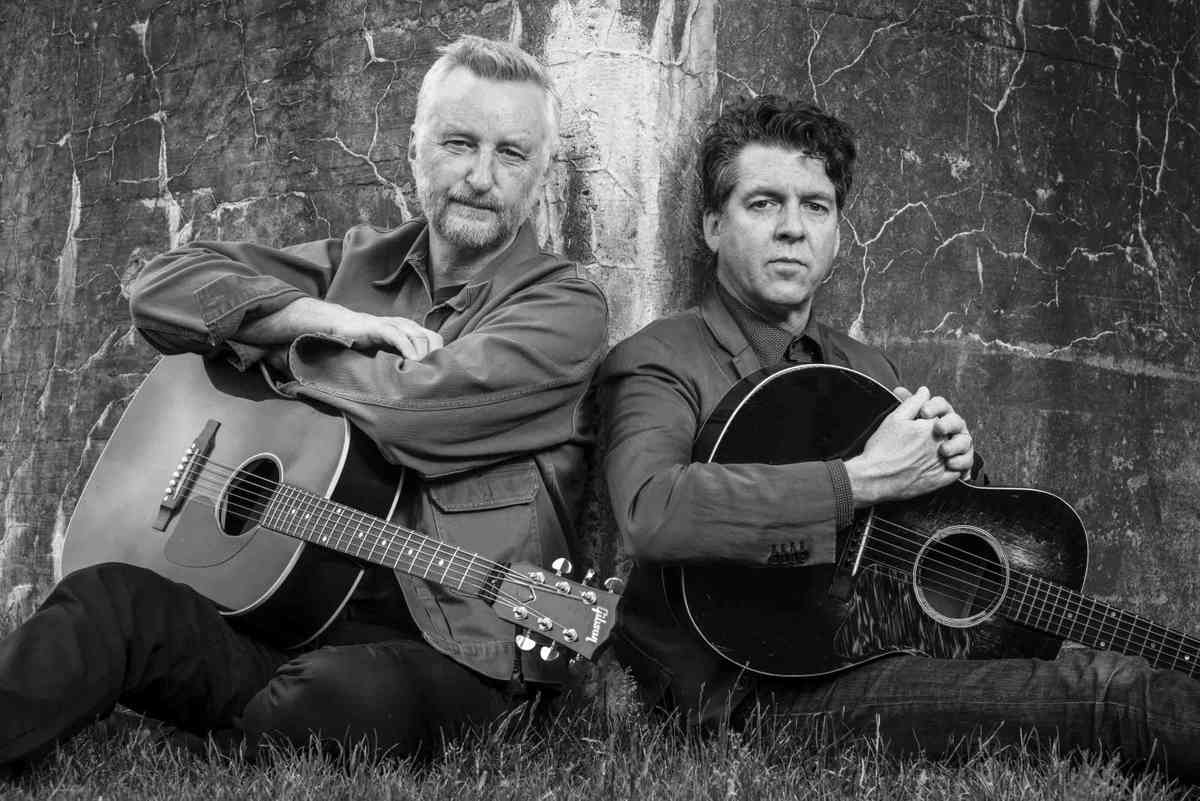 What are your thoughts on Trump?

I’ve been going to the United States since 1984, and this new Make America Great Again thing… I think America is a pretty great place anyway. What does Trump mean by that? Is he going back to some imagined time when there wasn’t any racism in America?

There’s a lot of talk at the moment about Black Lives Matter, which is a very important issue in the States. Each generation that rises, in America and in our country, has to deal with that problem. There are genuine problems, and to suggest there was a Golden Age when this didn’t happen is wrong.

Woody Guthrie, when he was a child in Oklahoma, in the early Twentieth century in America, saw lynchings. We’ve come a long way since then. America is a great place, but like every great place, it has it’s problems and those problems need to be confronted, rather than turning your back on them and looking back at some alleged Golden Age that never existed for the majority of people. Chicago’s an important music city. Did you spend much time there?

Yes. Chicago’s most famous for the Blues. The people who played the Blues came up the Mississippi Valley on the railroad to work in the factories in Chicago and brought with them their own music, which, within a generation, turned into the urban blues, people like Muddy Waters. That was an ideal place for us to start.

Chicago Railway Station is an amazingly beautiful place. The Grand Waiting room is the size of a small cathedral. The acoustics in there were just great for singing.

What was the most scenic stretch of the journey?

The most scenic stretch for me was following the Rio Grande across the far west of Texas into New Mexico: very beautiful, great rivers, mesas. It helped that it was at sunset, so all the rock landscape glowed a dark tawny hue.

When you’re on the train, you have to surrender to the time. In America now, because they have to give way to freight trains, you don’t always arrive on time. The Wi-Fi is patchy. But it’s cool. You just have to let yourself go.

You’re in an environment with people, and you get to know them. Because there’s only one dining car, they have to feed people on a rota, but they deliberately sit you with people you haven’t sat with before, so you sit down at the table and talk about why they’re doing a journey, what their story is. Everybody’s got a story. 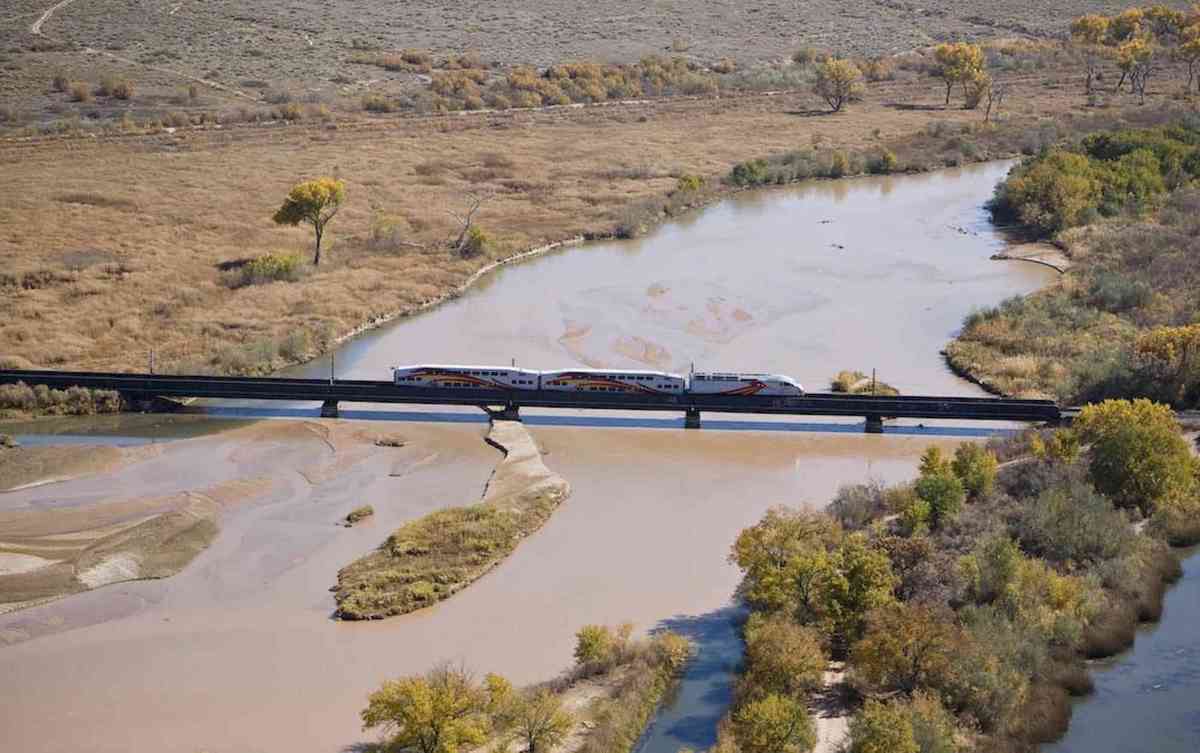 Did you have a favourite station?

The most memorable to me was the San Antonio Sunset Station. It’s no longer owned by Amtrak and to get into there we had to get off the train for 24 hours, as the train pulls in in the middle of the night when it’s not open.

It’s such a beautiful building. When it was built, around the turn of the twentieth century, to serve the Sunset Line from New Orleans to Los Angeles, it was that time when travelling on the trains was the Golden Age. They’ve retained some of that.

Most people fly in America. Getting the bus or train is often seen as the poor option. Are trains still a big part of the culture?

Railroad travel in America is quite a marginal pastime. It’s not because Americans have forgotten the railroad. Without the railroad, the American economy would grind to a halt. They put more freight on the rail than any other industrial nation. But the average American would no more think of taking a train to cross America than we would think about sailing across the Atlantic. 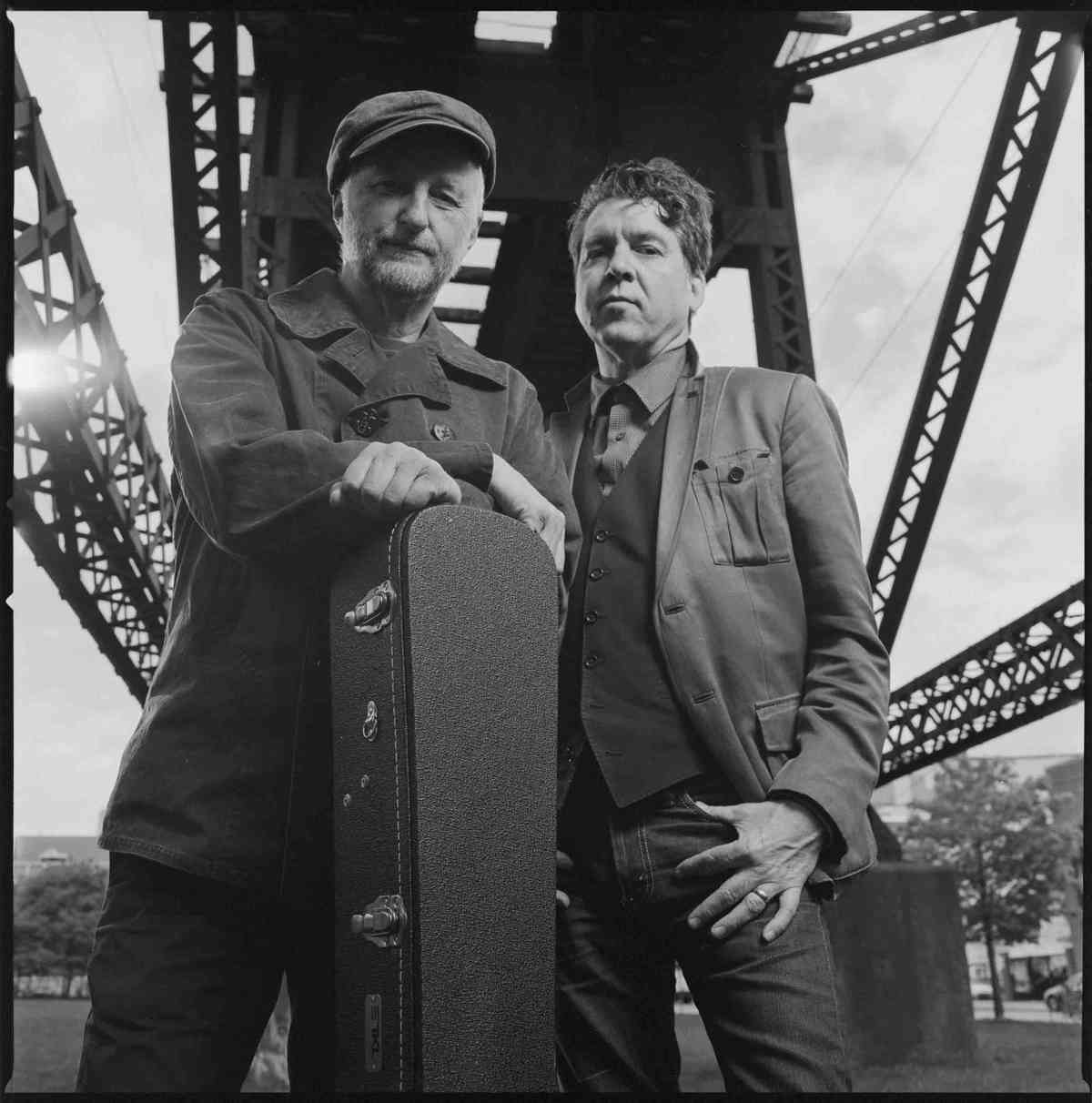 What other rail trips have you taken?

I’ve travelled by train from the Great Lakes to Vancouver in Canada, through the Rockies. That’s a lovely trip. I once went from Leningrad to Kiev on the train, in the old days. I’ve been the length of Italy on a train.

For me, when I’m touring, it doesn’t make much difference if it’s a sleeper bus or sleeper train. Except, on a tour bus, sometimes the last thing you think of as you go to sleep is: I hope the driver is awake. On a train, you tend not to think about that.

Riding trains is something I seek out. We’re looking at going to Australia next year. One of the things I’m keen to do, ever since they opened it up again 10 years ago, is the Ghan rail trip from Adelaide to Darwin, right through the middle of the country. The problem for me with touring Australia is you only see the edges of the country. You’re aware there’s this vast interior you never get to see, and I imagine it’s interesting.

I always get the train if I can. I live in West Dorset and I’d rather get a train up to Waterloo in London than drive.

In my earliest days, I used to travel on a train with my guitar on my back and a little amp. But it’s a different thing to take a really long journey and just surrender to the mode of transport, relax and let the days go by. It’s a different way of thinking, to not worry about the pace of everything or check your emails, Twitter and God-knows-what-else… You just let yourself go and watch the world go by. It’s an amazing way to see a country.

Billy Bragg and Joe Henry’s new album Shine A Light: Field Recordings From The Great American Railroad’ is out Sept 23 on Cooking Vinyl.

The album was recorded in stations and other locations during a 2,728-mile journey across America by train, and features the songs originally made famous by the likes of Lead Belly, Hank Williams, Glen Campbell, The Carter Family, Jimmie Rodgers and more.

See shinealight-joehenry.billybragg.co.uk/ or www.musicglue.com/shine-a-light-uk/ for more details of their album and train journey.