Bill Bryson interview: "I enjoy the preposterousness of life"

The legendary travel author talks road trips, great guides, and his favouite place on earth (hint: it's not where you'd expect!)

3 mins
Wanderlust: It’s been nearly 30 years since your first book came out – The Palace Under the Alps, and Over 200 Other Unusual, Unspoiled, and Infrequently Visited Spots in 16 European Countries – which is sadly out of print.

Bill Bryson: It’s a strange book; it was never really in print! The publishers went out of business simultaneously with the book being published – honestly they did! I think it was their last sort of desperate effort to generate income; to get any books they had into print. And mine was one of them. So they did actually publish a couple of thousand copies, but they were never sold – the company just went under.

Obviously you’ve had huge success with your books since then: how do you think you’ve changed as a writer?

I hope that I’ve become a little nicer. When I first started – especially when I started doing the travel books – it was made clear to me that I was supposed to be writing comically. That's what my first publisher saw in me, that's what he wanted me to do, and it was what I enjoyed doing. But my instinct at the time was that the best way to make jokes was to make fun of people. So when I read a lot of that early stuff now, I feel the jokes are really quite good sometimes [laughs], but they can be a little insensitive.

As I’ve aged I think I have mellowed considerably. I still try to be comical, and to enjoy the preposterousness of life and how ridiculous people are, but in way that isn’t quite so cruel – because I’m not a cruel person!

The Lost Continent – which was about me going back to America – I didn’t even see that as a travel book. Although I was travelling around America, it was really more about me as an American who had left the country as a young man, going back and looking at it 20 years later. So it was more sociological really: I was looking at this country that I’d grown up in and seeing how it had changed – and how I had changed. I didn’t think of it remotely as a conventional travel book.

When that book was finished, I went to my publisher with other ideas that had nothing to do with travel and he said, ‘no no no, you’re a travel writer, you must do more travel’. So for the next three or four books I did travels, and I still enjoy travelling a lot – even though I’m a terribly incompetent traveller.

I do enjoy the experience of going to new places and seeing new things, but that wasn’t really what I wanted to do in life. I didn’t want to have these experiences and then write about them, I wanted to write about lots and lots of other things. Increasingly over the years I’ve moved away from just travel writing.

Do you have a favourite place in the world?

Home is actually my favourite place. I’ve genuinely enjoyed almost all of the travel that I’ve done – I don’t regret any of it, even the bad experiences. But, at the same time, wherever I’ve been in the world, if somebody came to me and said “Mr Bryson, there’s a helicopter waiting, we’re gonna take you home now,” I’d go in an instant. That’s what I really want to do.

I have a very happy family life and I’ve always missed my wife a lot. Through most of the years that I’ve been travelling, she hasn’t been able to come with me because she's had to stay at home and raise the children. I wouldn’t have been able to do all these things if she hadn’t been such a saint about it.

A big part of why going home is such a splendid experience is because, for a long time, it was something of a novelty. It wasn’t something I was doing every single day of my life so I didn’t get fed up with it. I was constantly coming and going a lot and, after a while, that’s why I stopped doing so much travelling – it’s a big commitment.

So where would you say home is now? Is it UK, America or both?

You mentioned The Lost Continent: for our 21st anniversary issue we’ve just gone back to America and done a road trip that we’ve designed for our readers. What would you say are the ingredients for a good road trip?

I think the worst thing about a road trip – or the worst thing about being in a car or any kind of vehicle – is that it cuts you off from the outside world. So the first thing you’ve got to do is get out of the vehicle as much as you can. It’s very easy to drive across a country and not experience that country at all. I think it’s very important to park or get off the Greyhound or whatever you’re doing. Get out and actually immerse yourself in the scenery.

I’ve done a couple of things where I’ve been on cruises as a guest lecturer and it’s a really interesting experience. It’s very comfortable, but it’s very frustrating if you like to travel because you get off the ship, they put you on a coach, and you spend the whole day experiencing, say, Costa Rica, through glass. You just think: this isn’t working.

Do you remember celebrating 21 yourself?

I remember up till about 8 o’clock in the evening, then after that it’s all a blur! 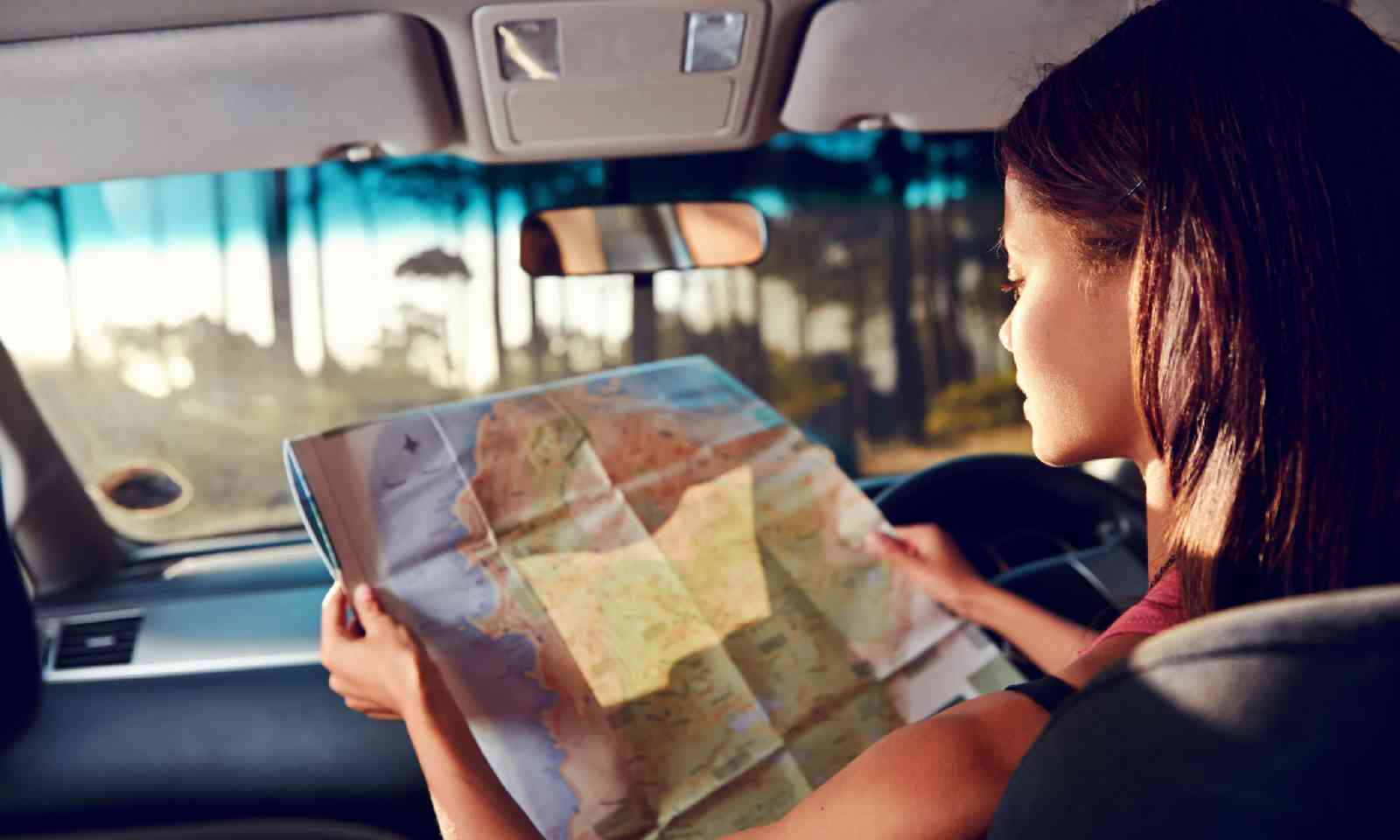 Road trips: sometimes it's best to just get out and walk, says Bill Bryson (Shutterstock)

A Walk in the Woods is probably one of my favourite books: do you still get to go out walking much? Do you have a favourite place?

I don’t look like I walk a lot, but I do still walk a lot. Just this week we were pinned down in and around London because my daughter was just about to give birth, but of course we didn’t know quite when. So I had some time to kill in London and I went out for some – to me – fairly epic walks. I walked from central London all the way through Wimbledon Common and Richmond Park and sort of winding around there. I did about 15 miles and ended up at Thames Ditton. It was just fabulous!

When you travel, do you travel with a guidebook or do you go uninformed and embrace serendipity?

It’s a really tough one because in some ways guidebooks are really handy. If you don’t consult the guidebook you might miss things, but at the same time it does deprive you of the sense of discovery. If I think of all the very best things I’ve ever seen, they were mostly things that I didn’t know were there and that I just chanced upon. It makes it more memorable if you feel as if you’re the first person to have found this thing, rather than having been directed to it.

Do you have any advice for aspiring travel writers?

You know a lot more about this than I do, because you’re dealing with manuscripts every day of your life. But I think the basic failing I see in a lot of aspiring writers is when they just assume that, because they’ve had a great experience, that it's automatically interesting… and it’s not! [laughs] It’s a real start; but just because you’ve done it, doesn’t make it automatically fascinating to the world.

You have to figure out a way – either through some special talent you have, or a way of telling the story, or something – that makes it absorbing and engaging to a stranger.

Who do you like to read – who’s the next Bill Bryson?

I don’t know but there is a lot of really, really good writing out there. The travel writer who’s always been my favourite – he doesn’t do very much these days but I just love his work – is Redmond O'Hanlon. I’ve always thought that In Trouble Again was one of the best books of the 20th century – of any kind – and it’s especially a really good travel book.

And with space travel upcoming, could we potentially see Notes From a Small Universe?

No! I’m too old and too cowardly for that kind of thing. It’s much more like ‘Notes From a Gentle Ramble Around Dartmoor’ or something!

You've been a judge of the Wanderlust World Guide Awards for years – when you travel, do you take a guide?

I have on occasion. I used to do quite a lot of articles for National Geographic magazine. They would send me to places like Spain or Germany and, as part of their budget, they would allow you to engage a translator or guide because you needed somebody speaking the local language proficiently. I have used them for that and you realise, when you do use a guide in circumstances like that, you get so much more out of it.

But an awful lot of the travel I do – I was just recently in the Lake District for instance – a guide would be a little bit counter-productive.

What do you look for when you’re judging the Wanderlust World Guide Awards?

It is really, really tough. First of all you know that all of these people are good. They wouldn’t get to this point, to the shortlist, if they weren’t really good and if they didn’t have a lot of passion and support behind them.

We judge it not so much on the guides themselves, because we don’t know them, but on the testimonials that people write in support of them. [Deciding on the winners] is partly guess-work, but also you can really sense genuine passion, and they’ll tell you anecdotes that a guide did something that was beyond the call of duty, and made that experience better, richer or more comfortable.

You’re working on a new book: is it travel-related?

I’m doing – under some pressure from my publisher – a 20th anniversary of Notes From a Small Island. I’m going to travel around Britain again and do a reprise of that. I was a little bit dubious when I agreed to do it but I’ve been out, I've done the travelling, and I’ve thought about the things I want to write about. I was worried there wouldn’t be enough new stuff – I didn’t just want to be churning out the same old material again and telling the same jokes – but I think I’ve changed a lot in 20 years, and Britain’s changed a lot, so there’s plenty out there for me to make fun of.