Bettany Hughes: Treasures of the World

In new TV series Treasures of the World, the peripatetic historian tells the story of some remarkable places and people through historical sites and finds, as she tells Lyn Hughes

You travel to Greece, Malta, Gibraltar. Istanbul and other spots in the Mediterranean. What was the goal of the series?

We were determined that we get out into the world to celebrate it and find evidence to help us live our lives now. It just felt that more than ever that was something we should try to do.

A lot of archaeologists, for instance, are still working and discovering things, but have nobody to share them with. So as soon as it was legal and safe, we got on a plane and formed a tight crew bubble [with production company SandStone Global] and went off.

And was it your idea?

So we tried to pick places that we can relate to in life, such as ancient Olympia in Greece, to really look at the idea of competition in life; why are we driven to compete?

And in Italy, in Ischia, there’s a beautiful story about Michelangelo’s muse, a poet called Vittoria Colonna; they were absolute soul mates and wrote to each other every day and inspired each other. So, we ask why we love other people and how other people inspire us.

You certainly bring out the human side. But why do you think history is so important?

Our world has been created by the people who went before us so we’re living with history the whole time. But also these are women and men who lived full and rich lives. And if we can’t draw from their experience, mistakes and inspiration we’re idiots basically, because we’ve got this whole reservoir of good ideas to dive into.

So I think history is important and we also know that memory is incredibly important to us. Our whole brain is suffused with memory. So in order to have a new idea, we have to access an old idea. So that is why we’re literally creatures of memory. And that’s why the past matters. But if you take a country like Greece, which clearly has so much history, how did you actually narrow down where to cover?

I know, it’s like choosing between your children! So, we were driven by whether there was something new to say or show. We’re also trying to tell the story of the places through time and through its treasures.

The programmes also cover a big range of chronology. So we go right back to the Bronze Age and prehistory and then up to the birth of the modern age, the story of Greek independence in 1821 and Byron and all of that.

One of the most startling things in the Gibraltar episode was the Neanderthal discoveries there...

I’d been there to research the story about six years ago and I was very aware that people didn’t know about it. So that was the other thing that we’re trying to do – not going to the obvious necessarily but to celebrate this incredible tapestry of human experience.

We were excited by having access to the discoveries there. One of the only benefits of the pandemic is that people have been so incredibly welcoming, so helpful, so willing to collaborate.

And there's this really beautiful notion, this ancient Greek notion of xenia, which is friendship and how it is really important to welcome strangers into your country.

And we benefited from that to the power of X in Greece, but also elsewhere because the pandemic has really made me realise we really do rely on other people all the time and the world is better if we help each other out rather than, you know, ignore one another.

It was a really positive experience.

But you do obviously get special access; if we go to the same sites will we be able to see the same things?

Well we tried to choose places where almost without exception you can see it as a traveller. For instance, the Gorham’s Cave Complex in Gibraltar – there are public tours you can book. And you can go into the underground temple in Malta, the Hypogeum, but you can’t take any photos.

There’s places that people are going to be able to enjoy even if not now. So like that amazing site in north Greece, Aigai, the city of Philip II; it’s being reconstructed and is going to be open to the public. 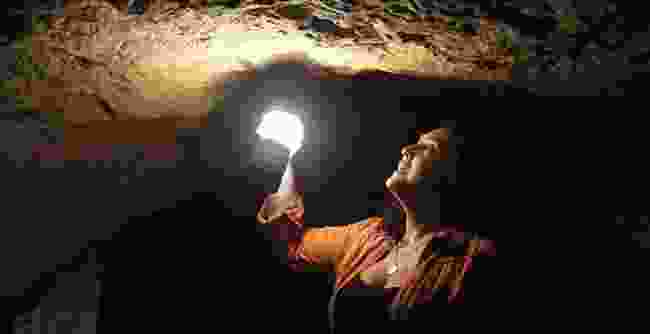 How familiar were you with the sites beforehand?

Nearly all of them because I have spent the last 30 years travelling and researching. But sometimes they’re new, like going inside the walls of the Moorish castle in Gibraltar.

There’s always surprises for me as well. Like seeing the Neanderthal art; that was incredible. And, hearing stories about that community, and that next door there was a cave of hyenas and they found the bones of a young child in it. So obviously these hyenas had gone and grabbed one of the children.

As with all traveling, some of the most nourishing and exciting experiences are the conversations that you have with people on the ground. So I always learn something new.

You have spent the last 30 years travelling, but what’s a holiday like for you?

My poor family, they have never had a normal holiday – we’ve always been on the road to see more sites. My daughter’s are grown up at 25 and 21 and they actually said, ‘Please, for the first time in our lives, can we have a family holiday!’

So, I don’t really do holidays but I just love being out there.

If there’s just one place from the series that you would recommend us to go to, where would you suggest?

Gosh, that is really hard! All I would recommend is to get on a boat and explore Greece, Turkey, Malta and Gibraltar that way. It is actually more possible than you think to go by ferry from one place to another. And it’s how most people through history have experienced those places – it gives you a perspective and a different sense of time.

And is there going to be a second series of Treasures?

Yes, and we’re going further east, so it’s going to be more Silk Road territory. I can’t wait, we start filming that in November this year so watch this space.

Bettany Hughes’ Treasures of the World is on Saturday evenings on Channel 4 and all episodes are out now on All 4 (channel4.com) Bettany travelled to Greece courtesy of the Greek National Tourist Office