Gentle giants: The 15 top whale watching trips in the world

Want to see the ocean's gentle giants for yourself? Take your pick of the best opportunities to see whales in the wild waters of Iceland, Canada, Mexico and beyond - with trips running all year round... 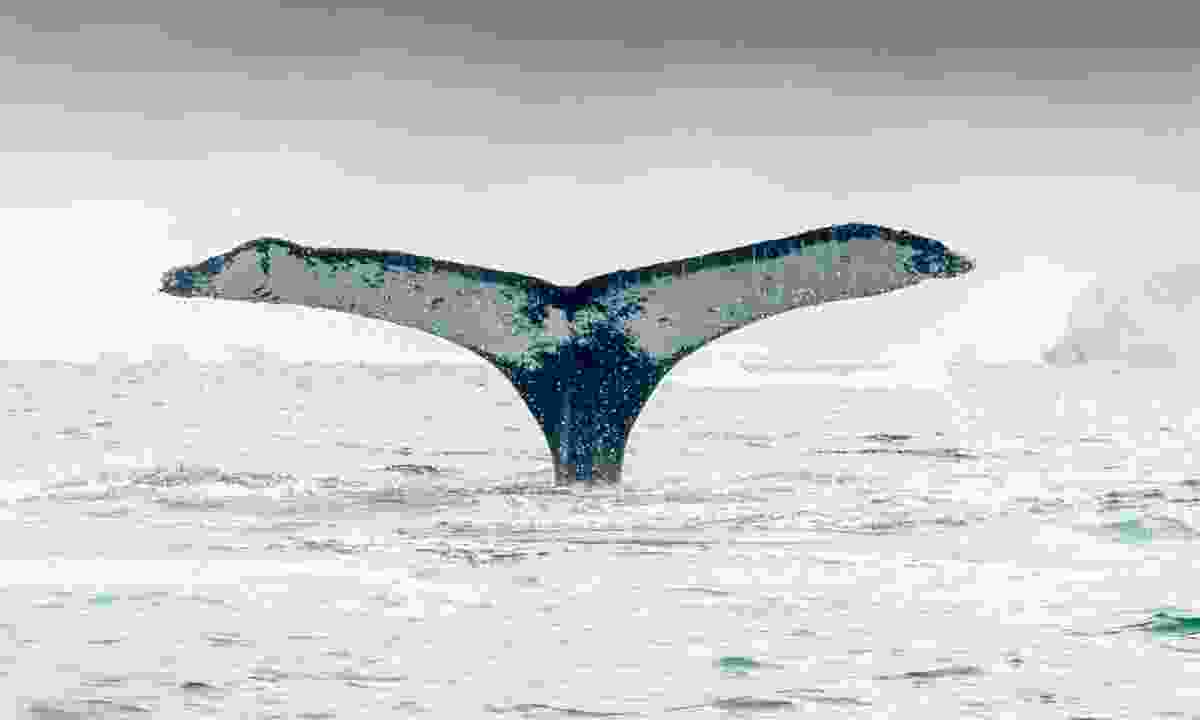 Learn all about these creatures of the deep on The Antarctic Peninsula Whale Science Voyage by Polar Latitudes with Polar Routes. Ardent citizen scientists can participate in this unique voyages during peak whale-watching season.

You’ll get to assist on crucial oceanic research and spy humpbacks and minke whales socialising in the Bransfield Strait and Wilhelmina Bay. The Lemaire Channel promises to steal the show – see the great glaciers and snowy slopes reflected in the still waters, while looking out for the water blows disrupting the stillness. Get up close with Canada’s biggest predators on Wildlife Worldwide’s bespoke Kayaking with Whales & Grizzlies trip. Sleep in the middle of the rainforest at Orca Waters Base Camp. Kayak alongside humpbacks and orcas on Canada’s Johnstone Strait and Blackfish Sound, and then spot grizzly bears hunting salmon on the Xakwikan River. Find tales of whales in Mexico

Expect encounters with San Ignacio’s famous grey whales on Naturetrek’s Baja California & Sea of Cortez tour. If you’re lucky one might even approach you for a tongue-rub. Chances of clocking other species such as the blue whale are also likely on the Baja Peninsula’s western coast, with trips to Magdalena Bay and the Sea of Cortez. Travel under the midnight sun on Discover the World’s Into The Blue – Whale Watching in Iceland tour. Spot orcas off the tip of the Snæfellsnes Peninsula, then continue past waterfalls and ice-topped volcanoes to watch humpbacks in the sheltered Eyjafjordur fjords. Bathe in geothermal springs, before visiting minke and humpback hotspot Skjalfandi Bay.

5. Sanctuary of the sea Absorb yourself in the Azores

Discover one of the world’s largest whale sanctuaries on Artisan Travel’s Wildlife and Volcano Exploration trip. Hop between the São Miguel and Pico islands, where you’ll spy up to 20 different types of cetaceans. Snorkel among wild dolphins, before completing your education in whale conservation at Pico’s Whalers’ Museum. Venture into Norway’s newest whale-watching hub on Magnetic North’s Northern Lights Break at Alten Lodge. Wonder at the northern lights in Alta, before spotting humpbacks and orcas chasing herring into tight fjords. Board a RIB-boat to see the whales up close, then end your Arctic adventure by going husky sledding. Coast down the cape in South Africa

Combine two passions on Fleewinter’s Wine & Whales tour. Explore the Cape Peninsula, before driving south along the coast to Hermanus to observe southern right whales breeding. Arrive in September in time for the annual whale festival, or avoid the crowds and whale-watch from as early as June. Finish your trip with a drive along route 62, the world’s longest wine route, to the Franschhoek Wine Valley.

When? Selected dates June to November 2019 Get a deeper understanding of humpback season on the Madagascar Reef & Rainforest trip with Rainbow Tours. With a stay at the Princesse Bora Lodge, learn more about whale conservation while observing the whales breeding in Madagascar’s Île Sainte-Marie. Other wonders include the world’s only pirate cemetery and lemur encounters.

How much? From £3,320 (including int’l flights; whale-watching requires additional fees) Get your minke fix on McKinlay Kidd’s Mull Week of Wildlife trip. Explore one of Britain’s most diverse ecosystems in Mull, coming across porpoises and dolphins. The real highlight is the minke whales gliding through the waters off Scotland’s West Coast. Search for golden eagles and otters, or take a boat trip to the Treshnish Isles to see puffins nest in summer. 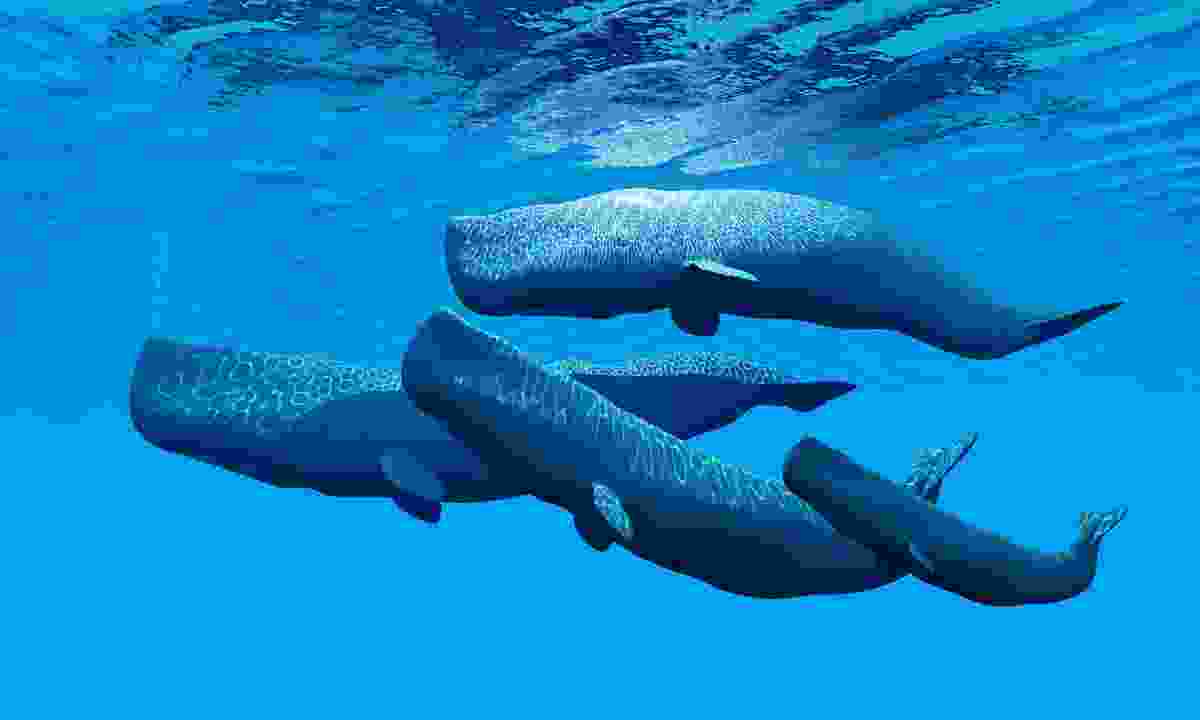 Cruise the coast of Sri Lanka

Soak up the sunshine and see a different side to Sri Lanka’s waters on Selective Asia’s tailor-made overnight Ceycat Deluxe Cruise.

Step aboard a sleek catamaran and watch from deck as whales zip alongside you in style – you can spot orcas, blue and sperm whales skimming through these waters, as well as dolphins, flying fish and turtles. Snorkelling and paddle-boarding are also options for adventurers who want to get up close and personal with these fascinating marine creatures. 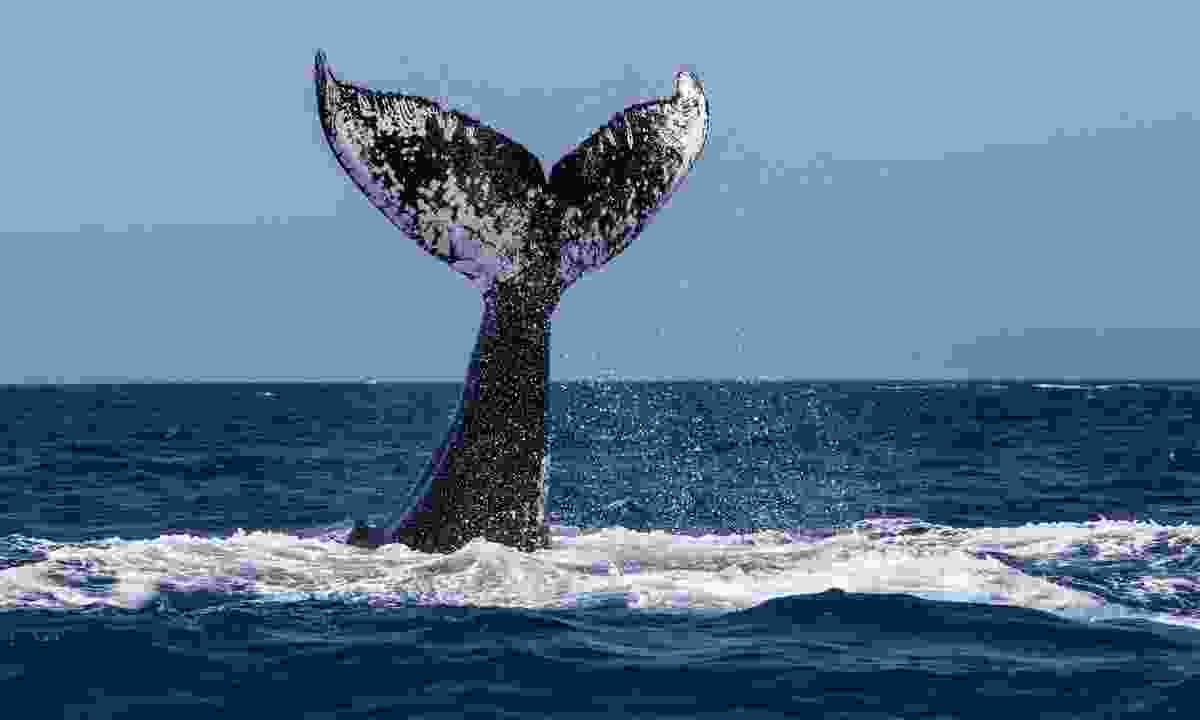 Hop around islands in Canada

Uncover one of the largest whale populations in the North Atlantic on the Colourful Newfoundland trip with Cosmos/Globus. Cruise around the islands surrounding Avalon Peninsula and visit Witless Bay.

Humpbacks are not too hard to find here, either – the region is home to one of the largest concentrations in the world, after all. Pay a visit to the Witless Bay Ecological Reserve and you’ll soon discover why Newfoundland is known as the “Seabird Capital of North America”. 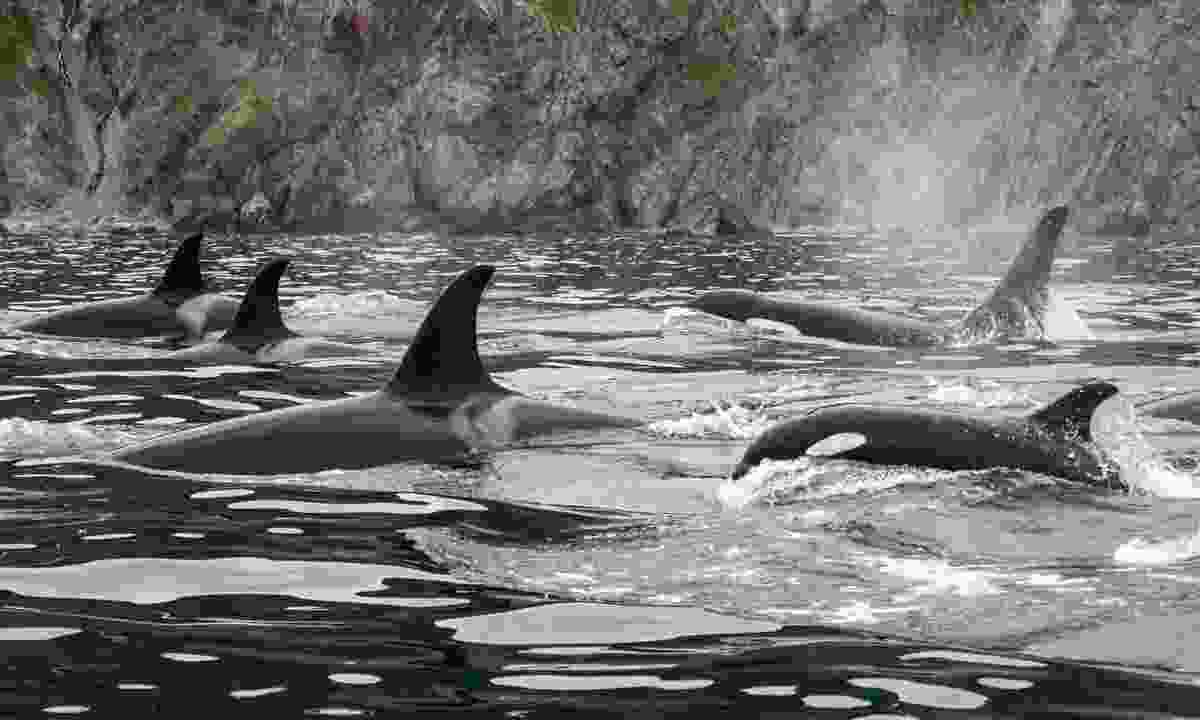 Glide among glaciers in Alaska

Spot humpbacks and orcas breaching the mercurial currents of Alaska Fjords & Glaciers (Wilderness Discoverer) with Small Cruise Ships. With the cruise as your base, you’ll sail through the scenic Stephens Passage, one of the world’s great humpback hotspots. Keep an eye out for misty spouts and blows clouding your vision.

Polar plunges are also on offer for the brave, but if you don’t fancy taking a dip in the chilly waters, get splashed on a kayaking or Zodiac trip instead. Spy anemones, urchins and starfish lounging in the shallows, and porpoises, otters and seals resting in the bay. Hike through the wilderness, then relax your aching joints with a hot tub session under the stars. 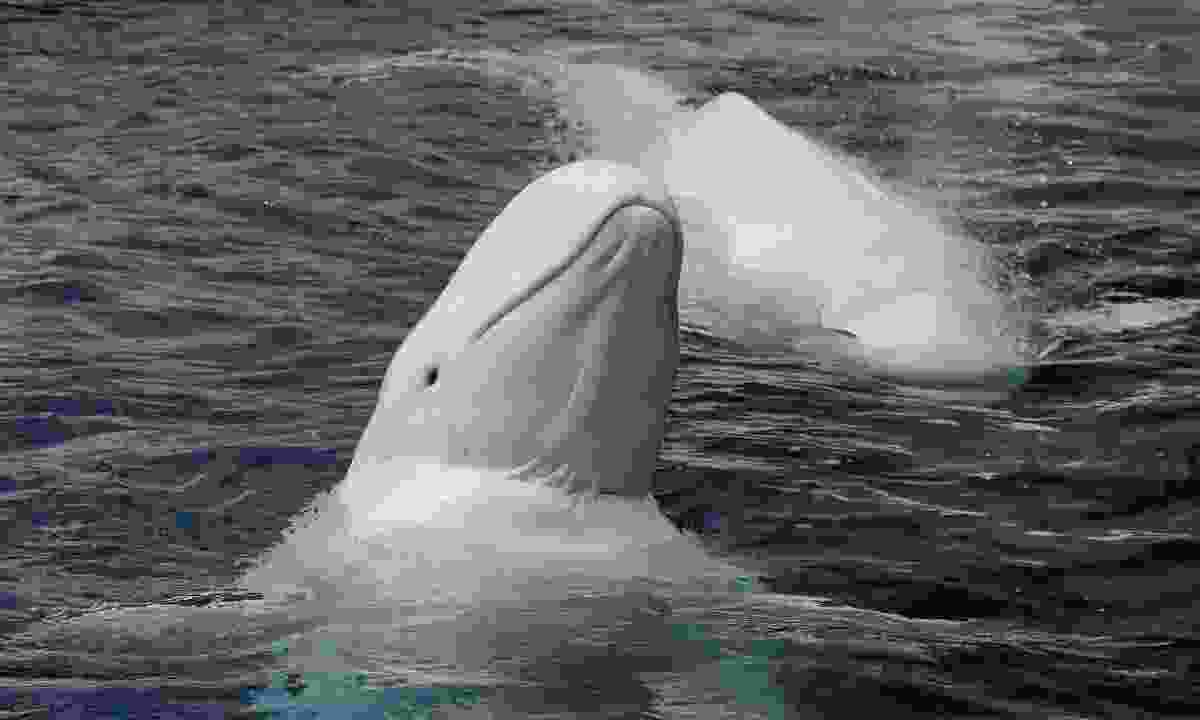 Focus on the Far East in Russia

Voyage into Russia’s Far East on the Sea of Okhotsk: Seals, Seabirds and a Legacy of Sorrow tour with Heritage Expeditions. Spot pods of feeding humpbacks, orcas, belugas, fin, and blue whales converging in these icy waters, with one of the world's rarest whales – the North Pacific right whale – also on the cards for avid wildlife-watchers.

Gray whales hover around Piltun Bay on Sakhalin Island – just hop on a Zodiac to the shallower waters and you’ll spy them feeding. Zip around bird-ridden Iony Island, but be warned: landing is impossible. Iony is teeming with birdlife – guillemots and kittiwakes swarm, and Steller sea lions sprawl across the rocky beaches. 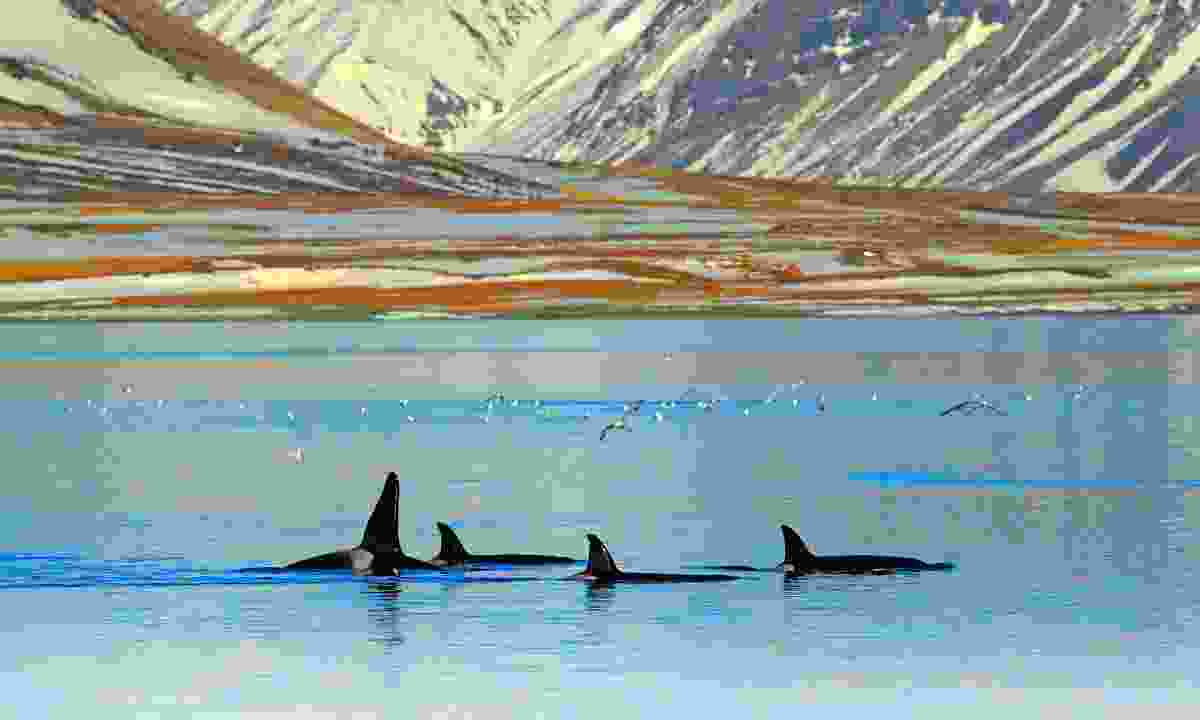 See orca off the coast of Iceland (Shutterstock)

Take part in a photography masterclass and capture orcas in their natural habitat on the unique West Iceland’s Northern Lights and Killer Whales trip with Wild Photography Holidays.

Enjoy sunrise shoots of Iceland’s brilliant waterfalls, volcanic lakes and lava fields, before heading out on a boat trip to spot orca feasting on tightly-packed shoals of herring. Snap high-quality pictures of these monochromatic predators elegantly skimming through the water with the help of on-board tutors, then head back to your harbourside hotel for a relaxing dip in the hot tub. 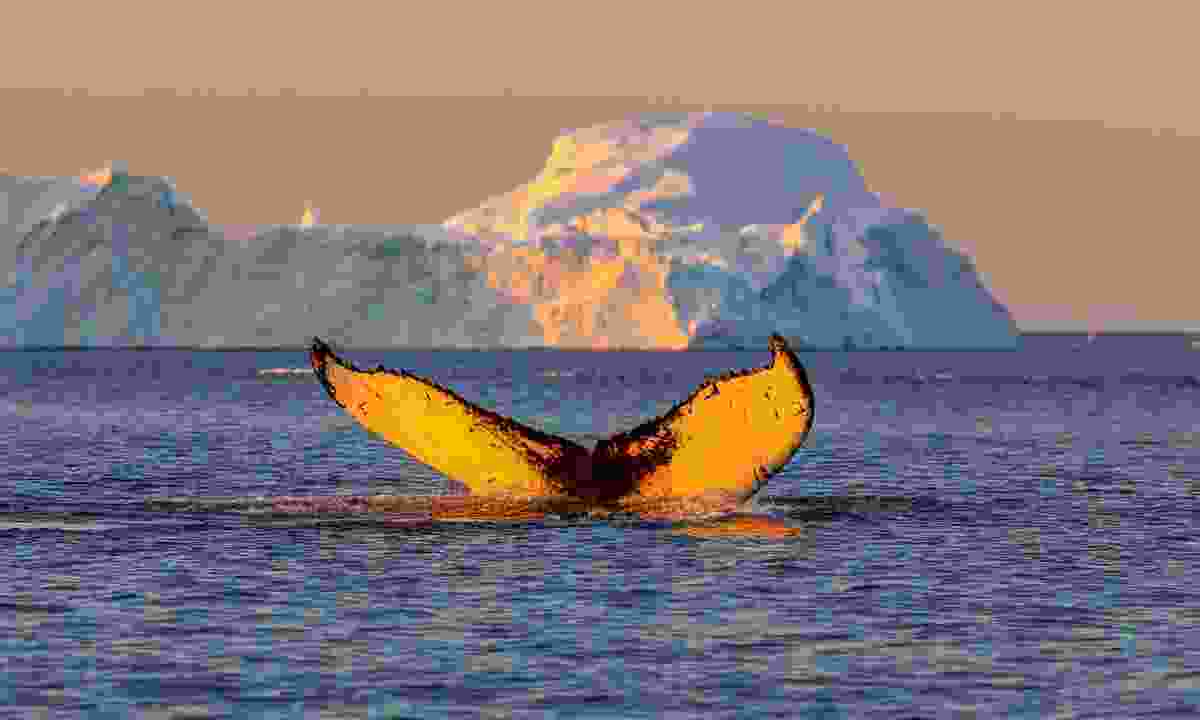 Go off the trail in Greenland

Set sail on the West Greenland Explorer with Aurora Expeditions for some close encounters. With almost a full day of daylight, you can gaze at krill-hungry pods of humpback, fin, minke and bowhead whales sliding through the Arctic waters for as long as you want.

Join onboard photography classes and take advantage of the ship’s extendable platforms to get as close as possible to the cetacean creatures – the perfect viewpoint for budding photographers. Then hop aboard a Zodiac or kayak and wind along the coastline, passing icebergs and glaciers along the way, and maybe brushing past a humpback.

Here's the best places in the world to spot orcas

Want to swim with wildlife? Head to one of these locations

These are the best dive sites on the whole world