Locals call the Yorkshire Dales 'God's Own', and on these walks you'll see why. Expect epic craggy peaks, vibrant green farmland and purple heather-carpeted moorlands that go on forever...

1. Ilkley Moor and The 12 Apostles 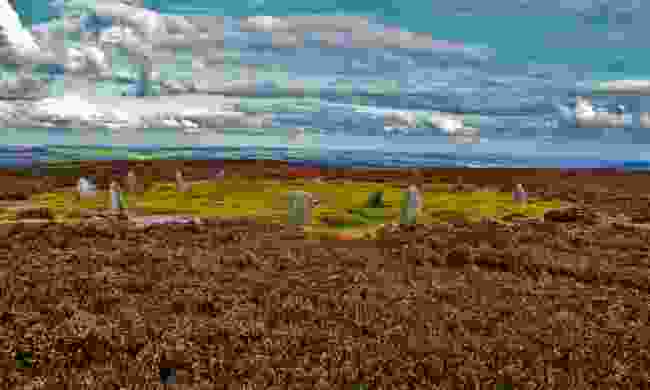 Ilkley Moor holds a special place in the hearts of the people of Yorkshire. It only takes a pint or two before they’ll belt out a rendition of "On Ilkley Moor baht ‘at", a heart-stirring anthem about the moor’s panoramic views across epic landscapes, bathed in heather.

This walk, starting from West View Park and taking you through White Wells, is all about the views. Climbing at an easy gradient towards Ilkley Crag, you’ll find a standing circle of 12 stones, known as The 12 Apostles, and little further along, the famous Cow and Calf outcrops.

The outcrops are a popular destination for day visitors to the Dales, but you can avoid the crowds by returning to West View through Rocky Valley. Tranquil and picturesque, this walk is stunning in the late summer and early autumn when the heather blooms. 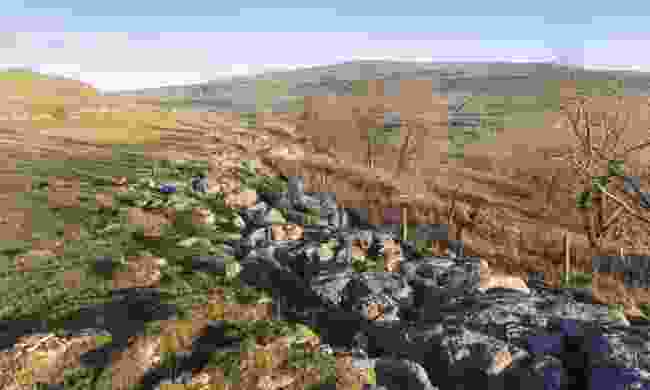 It’s hard to believe, but the beautiful landscapes of the Yorkshire Dales were once the heart of Britain’s lead mining industry. This challenging five mile walk, starting at the Buckden car park, will take you through the remnants of this industry and on through Upper Wharfedale to Buckden Pike.

It is a walk offering incredible diversity, from upland hill farms and hay meadows along the River Wharfe to wild moorland, big skies and far reaching views from the top of Buckden Pike.

The peak is marked by a Trig Point and a memorial to the Polish crew of an RAF Wellington bomber that crashed on the moor during a snowstorm in November 1942. The sole survivor found his way off the moor by following a fox. 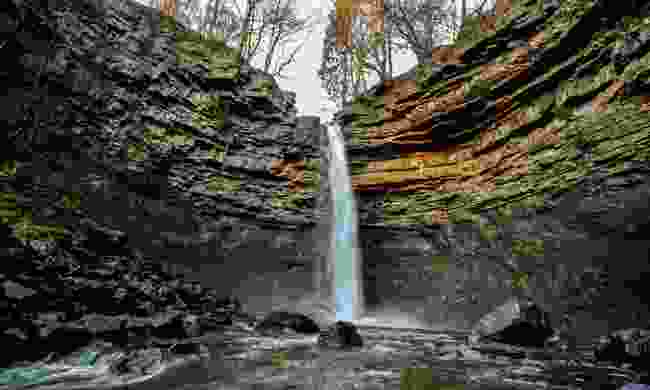 Feel the power of England’s highest above-ground waterfall, Hardraw Force, on this strenuous and undulating three and a half mile walk, starting at the Hawes National Park Centre.

Starting out, you’ll follow the Pennine Way to the Green Dragon, the pub that marks the entrance to Hardraw Force and the amphitheatre-like gorge that surrounds it. The walk returns to Hawes via the hamlet of Sedbusk, offering splendid views of Wensleydale. 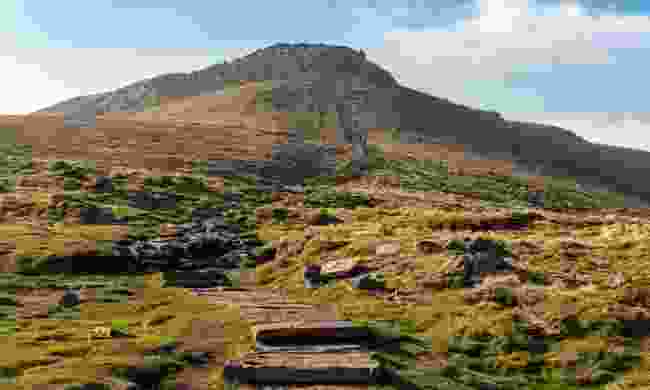 Ingleborough, the second highest mountain in the Yorkshire Dales (Shutterstock)

Towering 723m above the surrounding landscape, Ingleborough is the second highest mountain in Yorkshire and one of the Dales’ famous Three Peaks. It is also one of the most accessible, with a scenic circular route from the small village of Clapham.

The start of the walk takes you through woods and beside a river, before a steady scramble leads you through a gorge to Gaping Gill, natural cave on the slopes of Ingleborough itself.

Take time to poke your head in – the caving system here is large enough to fit St Paul’s Cathedral. From here, a steep but short uphill climb will take you to Little Ingleborough and then the main peak. 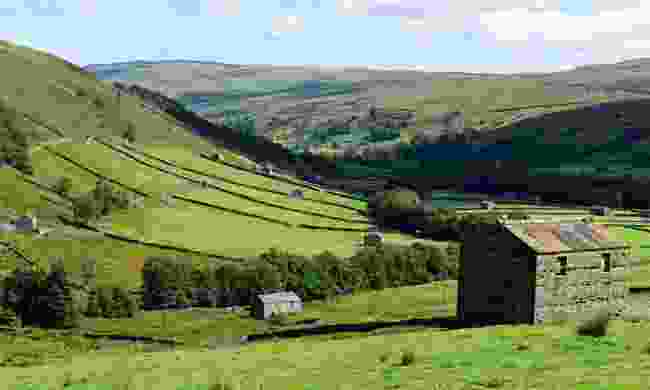 A valley in Swaledale (Shutterstock)

Fans of the books and TV series by James Herriot, a veterinary surgeon who lived and worked in the Dales, will love this walk. It is based on a walking holiday Herriot took with his son Jimmy, around the Youth Hostels of Aysgarth, Grinton and Keld. Prepare to take in the best the Dales have to offer.

The route is 52 miles long and takes four to five days to cover. The circular route starts at Aysgarth and combines strolling through valley bottoms with some energetic work on the skylines.

It takes you through parts of Swaledale and Wensleydale, and includes big sights such as Hardraw Force, Aysgarth Falls and Bolton Castle. Expect open moorland and rugged mountains, too. 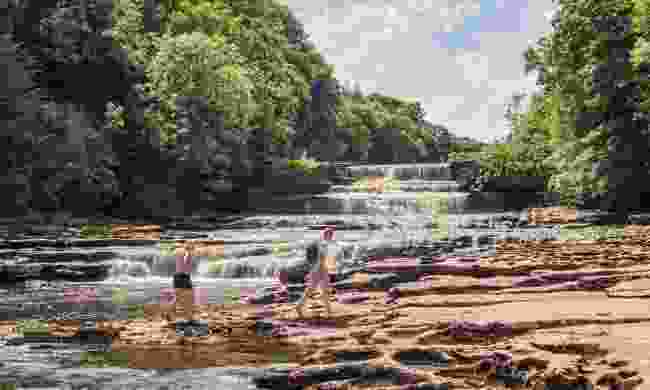 The Lower Falls at Aysgarth (Shutterstock)

This short two and a half mile loop around the stunning Aysgarth Falls packs quite a punch – woodlands, waterfalls and a pub called the Wheatsheaf marking the halfway point with a pint and a pack of crisps.

Aysgarth Falls are the main attraction, of course, and after heavy rain, its roar is heard long before it comes into sight. The birdlife in St Joseph's Woods, is abundant and noisy, including treecreepers, chiffchaffs and warblers.

Coming out of the woods you'll enjoy distant views of Castle Bolton, one of the country's best preserved medieval castles, built in 1399. The route back passes through the small village of Carperby, home to the aforementioned Wheatsheaf. 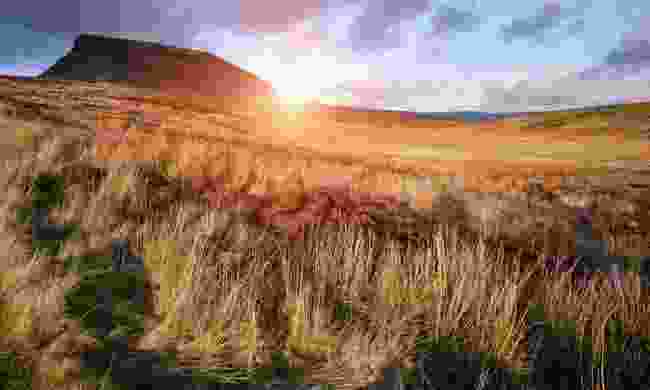 Here’s a walk for bird watchers! It's an easy five and a half mile walk up Horse Head Pass and on through remote moorland ridge and along the River Wharfe to Ouse, in the company of both woodland birds and river birds.

Starting at Yockenthwaite Bridge, you’ll pass through Whernside and Pen-y-ghent before returning along the beautiful River Wharfe. The Wharfe flows right through the dales before joining the Ouse.

As well as breathtaking views of the Dales’ famous Three Peaks, keep an eye out of for the area’s smaller delights – the kingfisher, oystercatcher and dippers down by the water's edge. 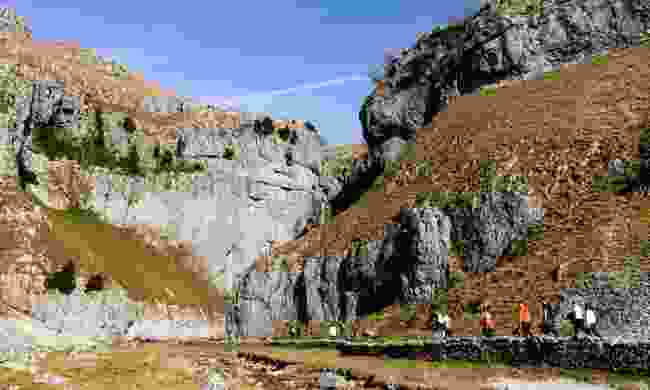 Walking along a footpath towards Gordale Scar (Shutterstock)

If you’ve had your fill of cascading waterfalls and towering peaks, consider this circular walk through the limestone landscapes around Malham Tarn, England’s highest lime-rich lake and home to a unique community of rare plants and animals.

The views are as sweeping and epic as you’d imagine in the Dales, but here it is dotted with archaeological hints of the areas varied past, dating back to the Mesolithic era. Monks farmed much of the land by Fountains Abbey.

And in the 18th century, drovers from Scotland brought huge herds of cattle through here to trade. The Smelt Mill Chimney, just before you reach Dean Moor, is a reminder of the area’s more recent industrial past. 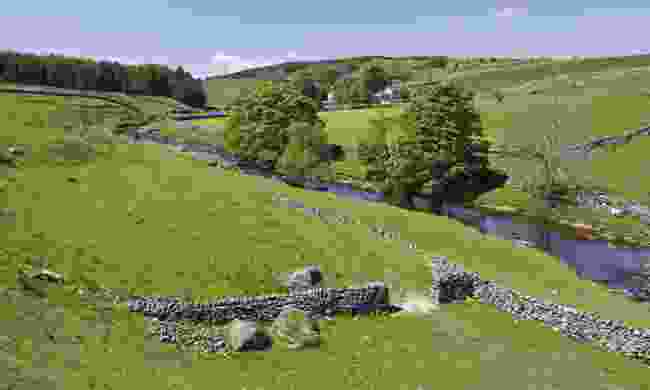 This flat, circular route starts at Yockenthwaite Bridge and follows the River Wharfe up towards Beckermonds. It’s a landscape of limestone pavement, glaciated valleys and flower-rich hay meadows as well as bronze age burial mounds and lime kilns from more recent times. There’s a stone circle too, and a cave where you can stop and listen to the water within.

As you approach Deepdale, you will pass through hay meadows that are blanketed in flowers during spring. Indeed. Much of your route will be lined by small bird's eye primroses.