7 of the best walks in Pembrokeshire National Park

The Pembrokeshire coast is a haven for walkers: miles of coastline, dramatic scenery, natural wonders to explore, and plenty of stops along the way. Find our pick of the best Pembrokeshire walks here...

The 186 mile-long Pembrokeshire Coastal Path takes in an astonishing 35,000 feet of ascents and descents, the superbly-indented coastline boasting soaring headlands, caves, islands,and sea stacks. No wonder it was made a national park in 1952.

While you may not have the time - or the energy - to complete the entire route, here are some irresistible highlights along the coast.

These are the 7 best walks in Pembrokeshire National Park... 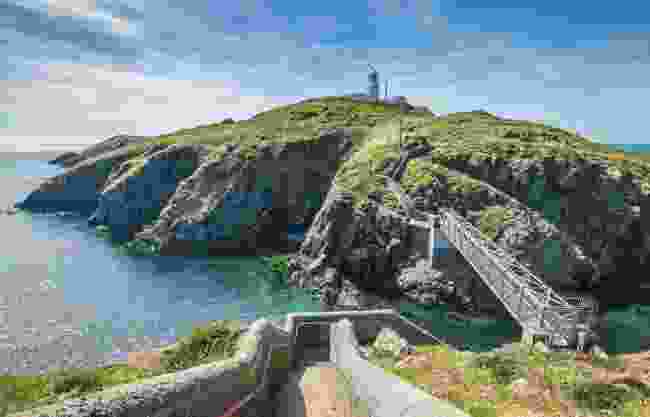 Strumble Head Lighthouse seems to rise straight from the sea, as you drive the narrow lane to the car park. In reality, it sits on a rocky islet, separated from the mainland by a narrow stretch of water. It’s a glorious starting point for a hike along the Pembrokeshire Coast Path.

Come in spring when the path is edged with flowers such as thrift, pink campion and bluebells, and the sky is filled with seabirds. Take time to visit the observation post before striding out east: there’s a good chance of seeing harbour porpoises, bottle-nosed dolphins and grey seals.

From the memorial stone to the French invasion turn inland, following the path signed for Llanwnda Church. Continue to Trenewydd, then follow country lanes back to the lighthouse.

Keep in mind: this is a surprisingly strenuous six mile walk. Expect rough clifftop paths that rise and fall with each new headland.

2. Porthgain to the Blue Lagoon 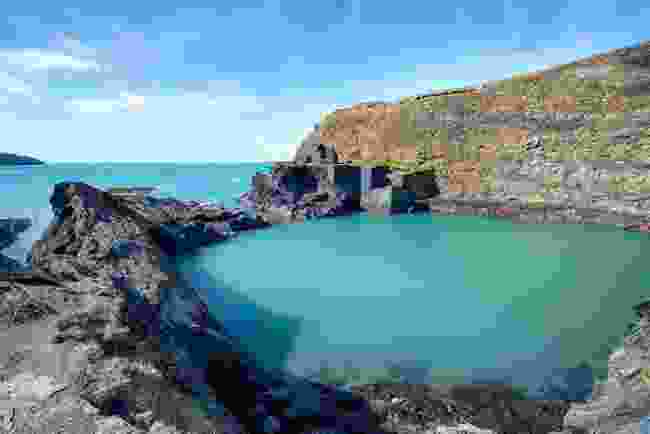 The Blue Lagoon in Pembrokeshire, Wales - not Iceland! (Shutterstock)

Porthgain is a picturesque fishing village with a gritty industrial past - as the ruins of the eerie brick hoppers above the harbour testify. Follow the Pembrokeshire Coast Path west, and discover remains of the old granite quarrying industry, still evident in the old railway track and ruined buildings.

The path continues up and round dizzying headlands, waves crashing on the rocks far below. Take time to climb down the metal stairway to the sandy cove at Traeth Llyfn before continuing on to the Blue Lagoon. Enclosed by land but for a narrow sea channel, the drowned slate quarry is a pool of intense aqua green and a playground for coast steerers, swimmers, divers and general daredevils.

Just before the car park at Abereiddy Beach, take the gorselined path inland and over fields to Porthgain. At the end of the four mile hike, enjoy a crab sandwich and a pint at the Sloop Inn or a hearty meal at the Shed Bistro. 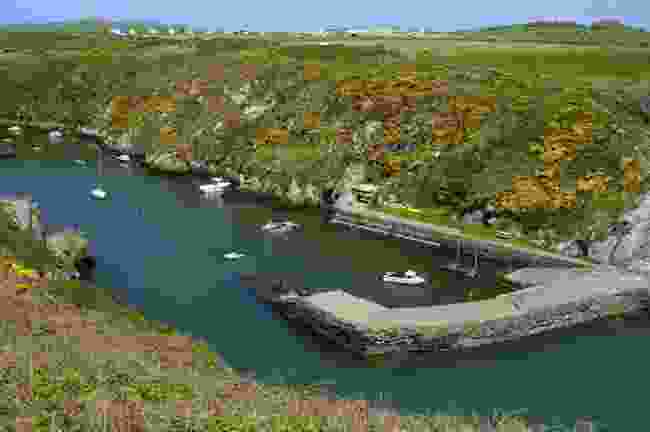 Follow a pathway to the remains of St Non’s Chapel and Holy Well and turn west to loop round the tranquil creek at Porth Clais and on to Pen Dal-aderyn. Marvel at the tidal streams that race through Ramsey Point, reaching speeds of seven knots.

Pass the ruined Treginnis Copper Mine, where St Justinian crossed from Ramsey Island with his head tucked under his arm, as legend goes. Keep your eyes glued for dolphins, seals and porpoises in the expanse of blue. Finish at Whitesands, where it’s believed St Patrick sailed for Ireland.

After the challenging nine mile hike, take the shuttle bus back to St David's. Explore the ruined Bishop’s Palace and the imposing cathedral before re-energising with a filling oggie, the Welsh version of a Cornish Pasty.

4. Solva and the Gribin Headland 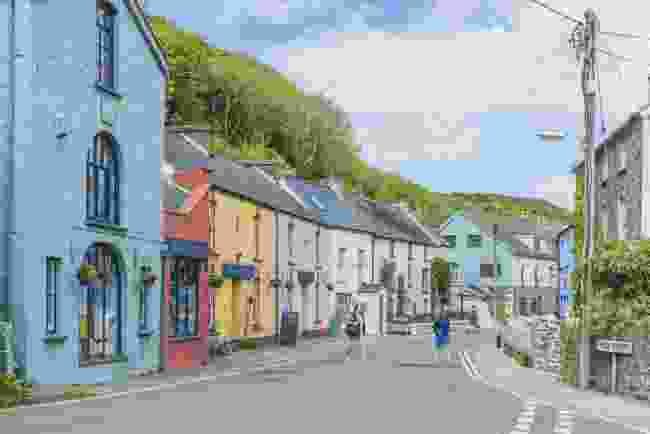 Solva is a charmingly pretty estuary village, so take time to explore the bright shopping street and harbour, before heading up the headland.

Cross the footbridge by the car park at the foot of the harbour and climb the Gribin to the Iron Age fort at the top with fine views over the sea.

Follow the hillside path down to the Gwadn, a small pebble beach. From here, take the path leading inland behind the beach, crossing a stream over stepping stones to climb the ridge and tumble down through woodland to Solva again. Relax on the balcony of the Cafe on the Quay at the end of the leisurely one mile stroll. 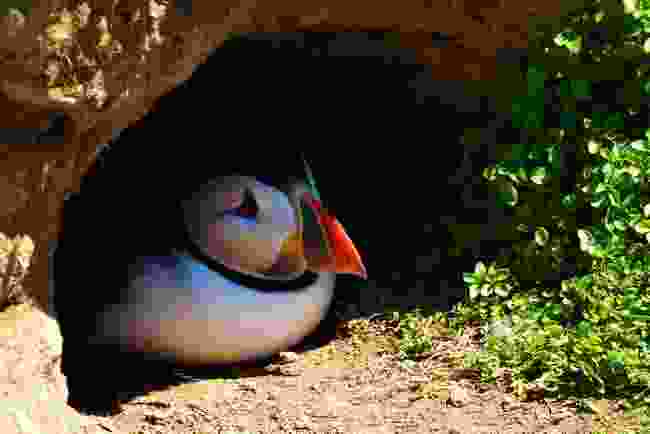 At the southern side of St Brides Bay, Skomer Island punctuates the curved end of the horseshoe bay. It's accessible by a 15-minute ferry, which departs from Martin’s Harbour, from April to September.

As a Marine Conservation Zone and a Wildlife Trust Nature Reserve, there’s a landing charge for non-members, but it’s well worth the fee and ferry cost.

As you circumnavigate the island, keep your eyes open for various seabird colonies, puffins, grey seals and rare coastal flowers. Just under four miles, this is a superb nature walks. There are no cafes, so pack a picnic. 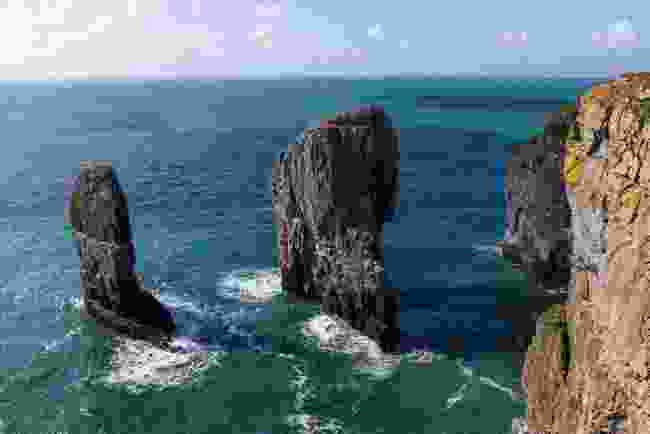 The starting point at Stack Rocks car park heralds a dramatic walk along the Pembrokeshire coast. This is an area of rugged sea stacks, a natural arch - the Green Bridge - forts and caves.

The limestone pillars are crammed with seabirds: guillemots, kittiwakes, fulmars and razorbills. From here the coastal path cuts across the Castlemartin Ministry of Defence firing range. Check it’s open before striding out to St Govan.

Steep steps lead down to a medieval chapel that’s built into the rockface. Dedicated to St Govan, legend says he came here to escape pirates, the cliff miraculously opening up a cleft to conceal him.

This is a magical place, legends aside, where waves lap in a rocky cove at the base of sheer cliffs. Retrace your steps to return to your starting point on this six mile walk. 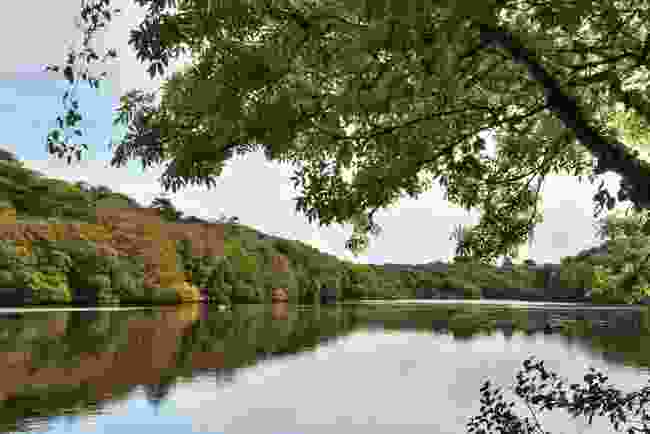 Winding through the Stackpole Estate, now owned by the National Trust, this six mile ramble has a gentler feel to it, but is just as beautiful as the wilder Pembrokeshire coastline.

It takes you through varied landscapes filled with interest. Start at Bosherston and follow the northern bank of the Western Arm of the lily ponds - a Monet-esque scene in summer. Cross the bridge over the Central Arm to reach the Eastern Arm with its handsome Eight Arch Bridge.

From here, traverse the Deer Park to Stackpole Quay, where you can stop for refreshments before following the coast to Barafundle Bay. Head through the man-made arch, framing one of Wales’ most beautiful beaches, then carry on to Broadhaven South.

Another golden strand, the striking sea stack of Church Rock stands sentry at the entrance of the deep-cut bay. Linger for a while before returning to Bosherston along the south bank of the Western Arm.

The best walking festivals in Wales