5 of the best walks on the Isle of Wight

With 805km of footpaths, the toughest part of hiking around the Isle of Wight is choosing a route. From clifftop rambles to beachside strolls, here are our top picks... 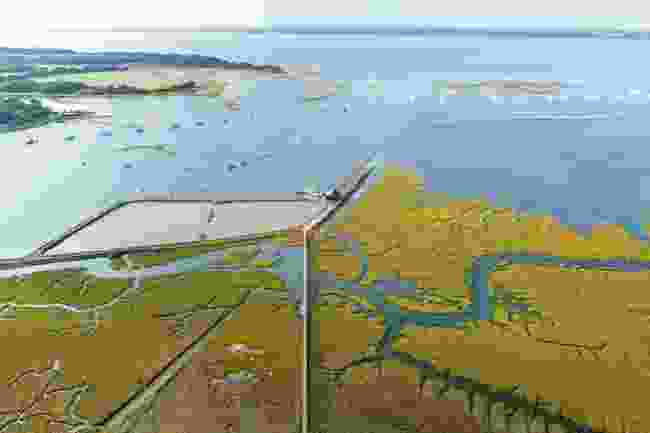 This 11km walk takes in the best of the Hamstead Heritage Coast, in the north-west of the isle. Don’t forget your binoculars, as it circles the National Trust’s Newtown National Nature Reserve, which is ideal for birdwatchers.

The route is mostly flat, so it’s not a challenging walk. From the 12th century St Michael the Archangel in Shalfleet, follow the road parallel to River Caul Bourne. You might see Canada geese at Shalfleet Quay, but to see more birds retrace your steps and cross the footbridge to Newtown.

Once you’ve seen the Church of the Holy Spirit – which has a picturesque bell and powder blue vaulted ceiling – it’s time to loop the reserve.

A gravel path behind the National Trust old town hall guides you through meadows that bloom with orchids in spring and ox-eye daisy, thistle-like knapweed and bird’s foot trefoil in summer. The flowers attract bees, plus marbled white and common blue butterflies. Even on a sunny day, the area is often deserted, so no wonder it attracts wildlife.

A traipse through woodland to Clamerkin Brook might reward you with a glimpse of seals. Seek out a hide and use its telescopes – or your binoculars – to spot lapwing, oyster catcher and kestrel in spring and migrating chiffchaff, blackcap and osprey in autumn. Come winter, you’ll see flocks of plover, and if you spot a flash of orange, it may be a redshank hunting.

Return to Shalfleet for a well-deserved pint at New Inn pub.

2. The Needles and Headon Warren 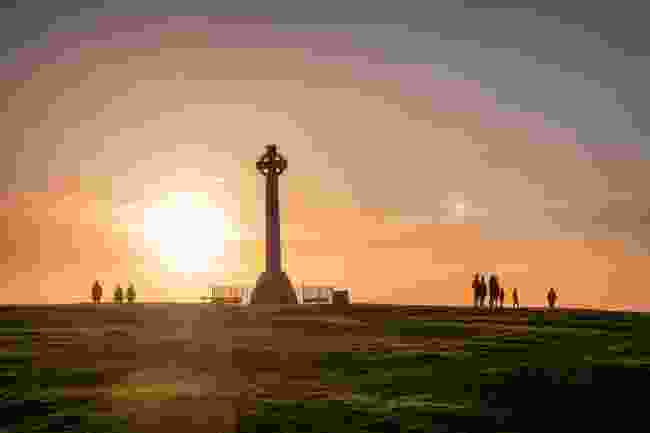 Tennyson Down (Visit Isle of Wight)

History buffs can get their fix on this trail, which loops an Area of Outstanding Natural Beauty. The route is of moderate difficulty, and starts on the island’s western tip, at The Needles Old and New Batteries.

Built in 1863, the old battery was built to protect the dockyards in Portsmouth from attacks by the French. The new battery was completed in 1895. It was used during World War II and for secretly testing rockets in the 1950s.

These days, it’s a National Trust site and visitors can see models of the rockets and explore an underground tunnel. On a clear day, you’ll be rewarded with views of the Solent and Dorset. You can also enjoy a spectacular panorama of Alum Bay and the lighthouse at the tip of The Needles, a scenic spot of jagged chunks of chalk that jut out of the sea like shark’s teeth.

Follow the curve of Alum Bay to Headon Warren, which is carpeted with heather and gorse in summer. Keen birders might spot the rare Dartford warbler. From there, follow Alum Bay New Road then Alum Bay Old Road to Tennyson Monument. The Celtic cross marks the site of a former beacon that was lit to warn islanders of impending invasion.

After a pit stop in the tearoom, continue to Freshwater Bay, then follow the cliff edge back to the Needles. 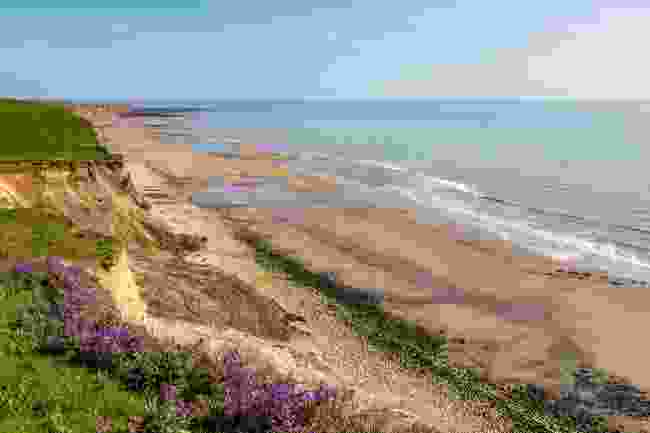 Can’t get enough of clifftop walks? Then set off on this (roughly) three-hour, 10km trail from Freshwater Bay, which covers much of the island’s west coast. The route passes over gentle hills so it’s suitable for most abilities.

Head south along the well-trodden path that hugs the cliff edge, ambling through orchid meadows and over sandstone cliffs to Compton Bay. The sea beneath the cliffs is as turquoise as the Caribbean, and it attracts surfers all year round. Compton beach is also popular with beachcombers hunting for fossils.

Continue south to Brook Bay. From Brook village, cut inland to visit Mottistone Gardens and Estate. While a manor on this site was mentioned in the Domesday Book in 1086, the house today dates back to the 15th century. It is now a National Trust property with a walled garden – stop for tea and scones in the grounds.

Alternatively, continue along the cliff path to Brighstone village, which is home to an 800-year-old church and thatched roof cottages. If you want a longer walk, continue south to Niton or extend the walk north of Freshwater Bay to Headon Warren. 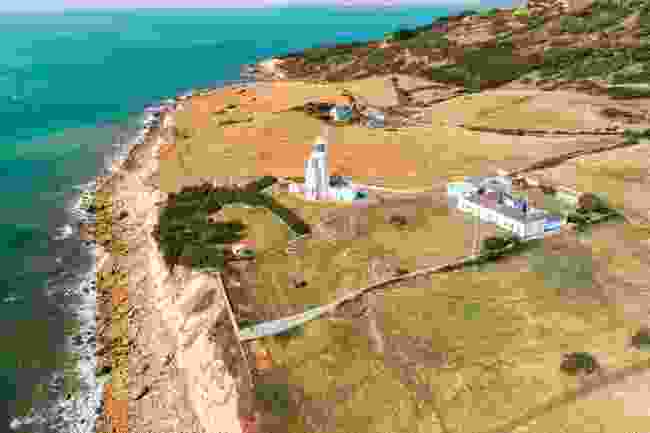 The south coast of the Isle of Wight is known for its chines, or water that flows through cliffs down to the sea. Depending on the season, you might experience a trickle, stream or waterfall. This 13km walk passes several chines, and while there are some short, steep descents and climbs near them, most of the route is of moderate difficulty.

From Brighstone village, follow New Road to Grange Chine and on to Shepherds Chine, one of the island’s largest. Just behind it is a small dam used to store the water for farmers, and there is still an old pumphouse on site.

Continue south and stop for a picnic at Atherfield Point, a scenic spot overlooking Atherfield Beach. You can reach the sand from the cliff path but take care – the cliffs are composed of chalk, sandstone and clay, making them susceptible to landslides. Whale Chine is the most spectacular, as the water has carved a gorge into the cliff face which drops 43m down to the beach.

The walk finishes in Niton, a charming village so small its only café is in its post office. 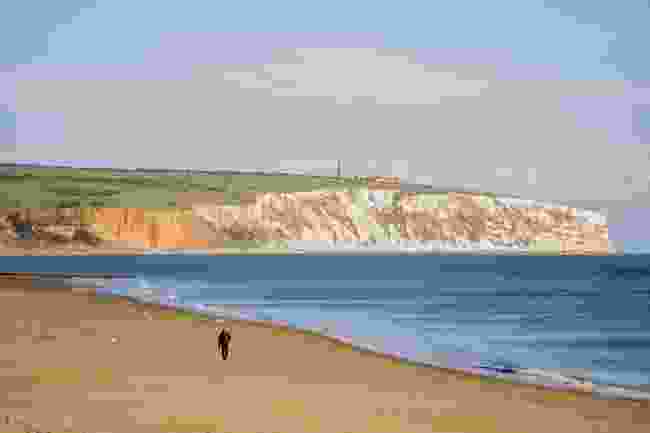 Many of the island’s clifftop walks offer tantalising glimpses of beaches, but if you’d rather stroll next to the sand then this route is ideal. Most of this excursion takes place on flat pavements, so it’s an easy stroll.

From Ventnor Botanic Garden, saunter down to Ventnor beach and along the esplanade. You’ll soon leave the town behind and enter woodland, passing St Boniface Church in Bonchurch along the way.  Continue along the coast – the route is part of the Isle of Wight Coastal Path – until you come to Shanklin Chine, a waterfall in woodland that is illuminated at night.

Shanklin village, with its bubblegum pink thatched roof tearoom, is at the top of the hill. Shanklin esplanade runs along the beach and continues all the way to Sandown Pier, although you can also walk along the cliffs.

The section of path that’s closest to Sandown is lined with rainbow-hued beach huts and a few cafes. Once in Sandown, you could saunter along Yaverland Beach, one of the UK’s longest. The far end connects to another clifftop path – just in case you haven’t had your fill.

Read about other UK walks:

The best walks in the UK

7 of the best summer walks in the UK

7 of the best spring walks in the UK