England’s north-east is a dream region for walkers. From bracing coastal trails to a coast-to-coast trek along Hadrian’s Wall, there’s a path to suit every mood and every level of ability... 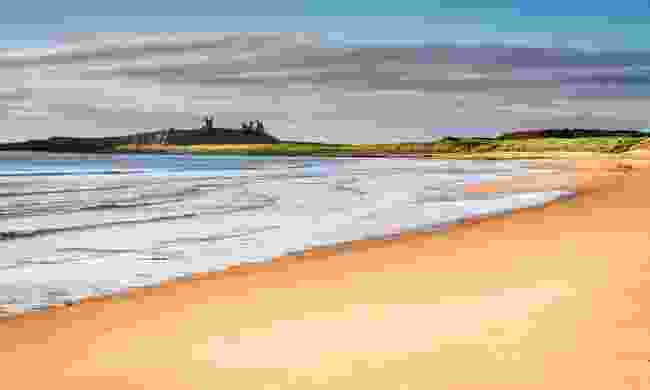 Embleton Sands leading to the ruins of Dunstanburgh Castle (Shutterstock)

Best done on a sunny day and at low tide, this walk will take you along one of Britain’s most beautiful beaches, past the skeletal ruins of Dunstanburgh Castle and the timeless beauty of Beadnell Harbour, where cobles – a small fishing boat with Viking origins – bob about on the water.

Starting from a small car park in Low Newton-by-the-Sea, the walk winds around Embleton Bay. Take time to soak up the views and the atmosphere at the ruins of Dunstanburgh Castle and at Newton Pool nature reserve, a little further along. There are two hides here that are perfect for watching for coastal wading birds, including black-tailed godwits, sandpipers, lapwings and greenshanks.

Reward yourself with a pint at a pub overlooking Beadnell Harbour before returning to Low Newton back along the beach or through the dune system at the rear. 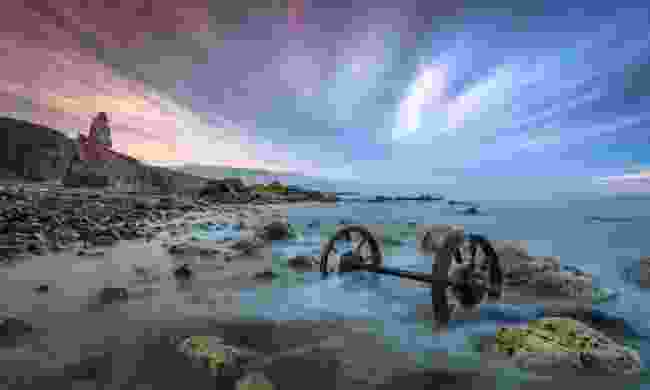 Chaldron wheels on the coast near Seaham (Shutterstock)

Part of the Durham Heritage Coastal walk, this 11-mile linear walk from Seaham to Crimson offers a mix of clifftop scenery as well as reminders of the area’s industrial past. While the coastline appears flat most of the time, the path ducks in and out of the steep, wooded denes along the way, adding interest, but making it quite an undulating walk.

The walk starts at Seaham Railway Station and heads straight to the coast. Take a few minutes to visit the recently installed statue of a British soldier commemorating the cessation of hostilities at the end of the First World War, before following the signposts back to the coast.

Apart from the vast empty beaches, the main feature of this walk are the reminders of the region’s coal industry, including abandoned equipment and collieries that dot the path. Not too long ago, old slag heaps spilled down to the sea, but most have been cleaned up. Now, where coal dust and grime once settled, wild flowers have taken hold. 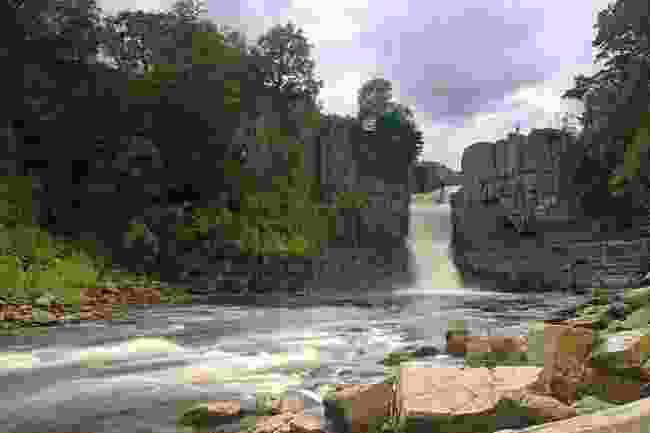 This moderate six and a half mile walk in Upper Teesdale takes you gently along the beautiful River Tees to the thunderous High Force, England’s largest waterfall. Along the way you’ll encounter the area’s rich and important flora, rare bird life, ancient juniper woodland and fascinating geology.

The walk starts at the Bowlees Visitor Centre, taking you through a kissing gate and across Wynch Bridge to the Pennine Way National Trail. You’ll know when you’ve reached the River Tees at Low Force – it’s marked by an impressive sculpture of a sheep!

The path here follows the river and is dotted with rare globe flower and birdseye primrose. At Holwick Head footbridge, turn away from the river, climbing steep steps through juniper woodland, until you reach the spectacular High Force waterfall. Pouring over the hard Whin Sill, a dolerite rock which formed 295 million years ago, it drops 21 metres to a plunge pool below. It is a spectacular sight. 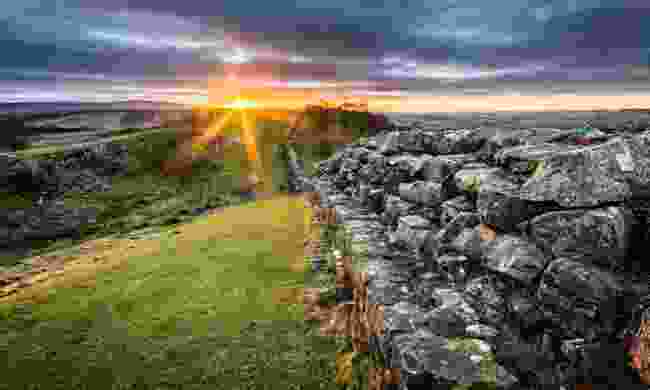 Tread in the footsteps of Roman legionnaires as you walk along Britain’s most intact Roman fortifications, Hadrian’s Wall. Whether you walk the entire length or just a part of it, this is the superstar of walks in this part of England.

The entire walk, from Bowness-on-Solway in the west to Wallsend in the east, is 84 miles long, a coast-to-coast trek that follows the remains of the wall, past Roman settlements and forts and through bustling market towns.

A less ambitious walk, but one that includes all the ‘best bits' - Sycamore Gap (where Prince of Thieves was filmed), Housesteads Roman Fort and the spectacular views from Whin Sill - is the Housesteads to Steel Ring circular walk. Only eight miles long, it is one of the most popular walks in the north-east. 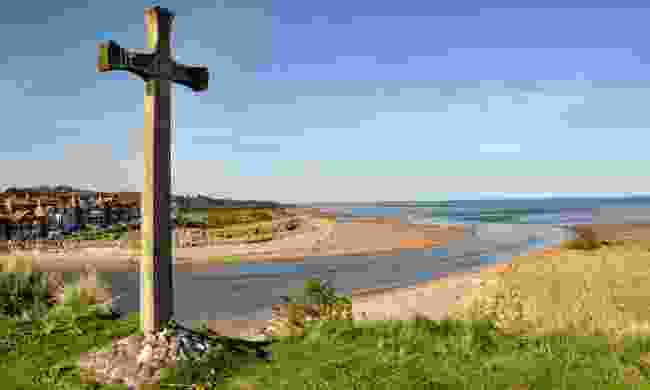 Another beautiful north-east coastal walk, the seven-mile stroll is great for both serious walkers and beginners, meandering through dunes and onto a long empty beach, topped by the pretty red-roofed town of Alnmouth and tailed by the impressive remains of the medieval Warkworth castle.

Time your walk right and the sand dunes of Buston Links will be ablaze with wildflowers, including bloody cranesbill, cowslips and harebells, gently swaying in the breeze. The beach is a favourite fishing spot for dive-bombing Arctic terns.

And the castle at Warkworth, once the ancestral home of the Percy’s, Northumberland’s greatest aristocratic family, makes a majestic end point, overlooking the River Coquet. 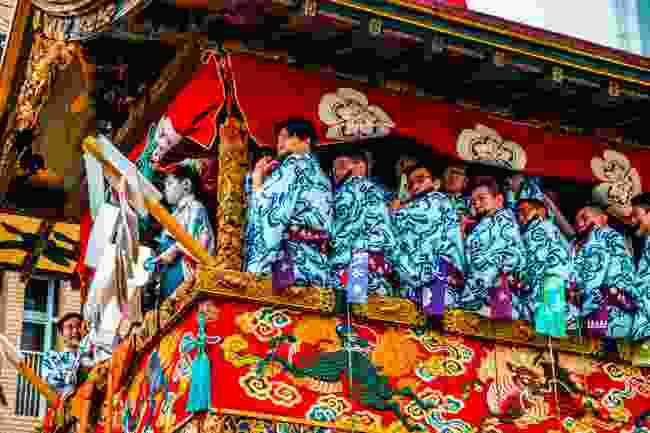 You are never far from civilisation on the Great Aycliffe Way walk in Newton Aycliffe, but you’d never know it. The five and a half mile circular path meanders through the woods and countryside just to the north of the town, with the ambience of a gentle stroll in the countryside. Roads are avoided and underpasses are used as often as possible.

The walk is notable for the sculptures that are scattered along the route. Made from stone, wood and metal, they appear at the most unexpected places and depict the the town’s history, folklore and nature. The Bug and Fungi sculpture is particularly startling. A second route takes you through the southern part of Newton Aycliffe. 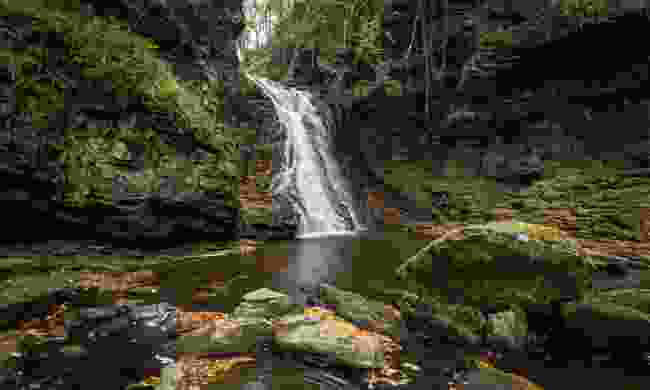 A short but spectacular walk in the heart of the Northumberland National Park, the three-mile Hareshaw Linn track meanders through a wooded valley to a majestic waterfall, designated a Site of Special Scientific Interest because of the rare lichens and ferns found here.

There are a few tough inclines and, as you can imagine, it can get a little damp under foot. A curved stone seat marks the halfway point, a chance to rest and look for red squirrels that have made ‘The Linn’ their home, along with great spotted woodpecker, wood warbler, spotted flycatcher, badger and Daubenton’s bat.

7 of the best walks on the Northumberland coast

9 things you must do in England