7 of the best walks in Kent

From the dramatic White Cliffs of Dover and the bleak coastline of Dungeness to the rolling countryside and stately homes of the High Weald, Kent offers a walk for every mood...

Known as ‘The Garden of England’, Kent’s delightful rolling countryside is softened by apple orchards and hop fields and dotted with the distinctive Kentish oast houses.

Between Kent Downs and High Weald, the county is blessed with stately homes and attractive historic settlements, including medieval Canterbury.In contrast, Dungeness offers a bleak and unsettling beauty as Britain’s only designated desert, while the iconic White Cliffs of Dover will surely blow the cobwebs away.

1. From Emmetts Garden to Churchill’s family home at Chartwell 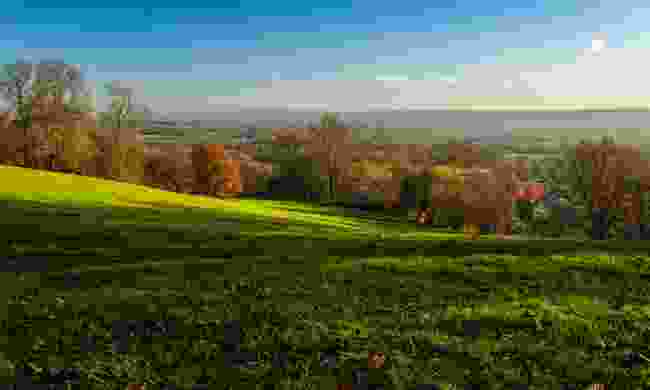 Autumn views south of the weald from the Kent Downs (Shutterstock)

This five-mile walk near Sevenoaks links the Edwardian hillside gardens of Emmetts with Winston Churchill’s family home at Chartwell. It takes the walker over the Weald, with vistas opening out to the surrounding countryside. Come in spring when the gardens are awash with colour, the woodlands filled with birdsong.

Leave Emmetts Garden (National Trust charges apply) along the path beside the tearoom and continue through Scords Wood to Chart Lane. Stop for a pint at The Fox and Hounds, then continue into Toys Hill woodland, passing the site of Weardale Manor (destroyed by a bomb in World War II).

Follow the country lane of French Street into the hamlet. Take the bridleway to Hosey Common Lane and follow the National Trust signs for Chartwell, the family home of Sir Winston Churchill. Explore the gardens and pause for lunch.

Return to the junction at French Street and take the footpath to the north, leading east towards Stanhope Wood. Cross Chart Lane again, north of the pub. Head through a glade to Emmetts Lane, then right at Ide Hill House back to Emmetts Garden.

2. A romantic walk in the grounds of Scotney Castle 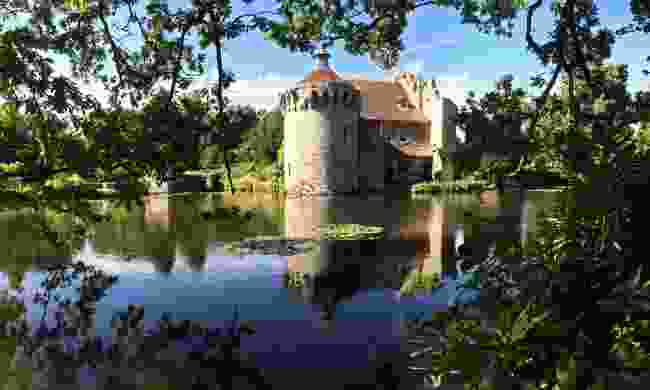 This enchanting two-mile walk includes some moderate climbs with great views to Scotney Castle. It takes the rambler through the estate with vistas of the old hop farm, the ‘new castle’ - an elegant Victorian country house - and the ruins of a much older medieval castle, surrounded by a motte and bailey on a lake island.

From Scotney Castle's car park, head through Salvin Gate and continue along the old carriageway over two bridges that cross the River Bewl. Climb the hill and turn left at the fingerpost. Pause to admire Hornbeam Pollard, one of the oldest trees on the estate.

Head north-east, following the blue-topped posts across fields and along the edge of woodland, pausing to enjoy the outlook to the new house and old castle. Look out for the distinctive tops of the oast house. Cross a bridge to follow paths north of two lakes. Drop south again to return to the tearoom and car park.

3. Through the country estate of Sissinghurst Castle 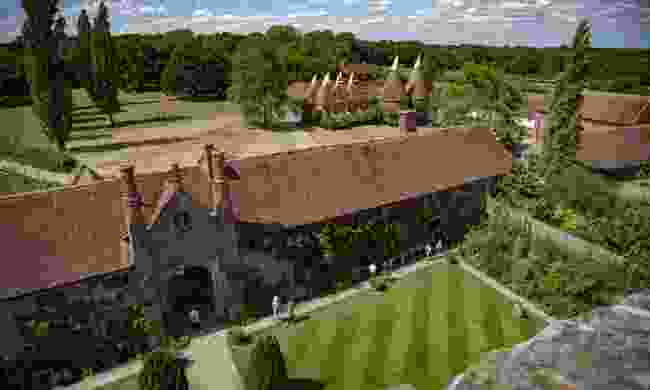 The grounds of Sissinghurst Castle (Shutterstock)

The three-mile walk circles Sissinghurst estate in the heart of the Weald. It takes the rambler through woods and parkland, providing lovely glimpses of Sissinghurst Castle, former home to writer Vita Sackville-West and politician Harold Nicolson.

From the car park, follow the path towards Sissinghurst Castle. Keeping left of the castle, continue along the medieval moat. Round the gazebo to the right (built as a memorial to Nicolson) and follow the path through the gate down the hill towards the lake. Turn left around the lower lake.

After crossing a second bridge, continue through Roundshill Park Wood. Cross the drive and enter Bull and Birches Woods. Join the bridleway, passing vegetable plots and follow the waymarkers north-east, skirting Saw Lodge Wood, then east and south again to return to your starting point.

Reward yourself with a cream tea at the world-renowned gardens at Sissinghurst, after a lung-clearing ramble through this beautiful estate.

4. On the trail of Canterbury Tales 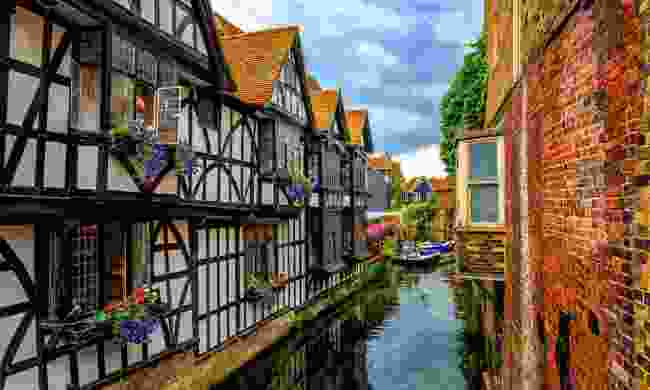 Follow in the footsteps of Chaucer’s pilgrims through the narrow streets of Canterbury. The two-and-a-half mile city walk takes in the city walls, originally built by the Romans, and the medieval centre with its ancient cobbled streets and timber-framed houses.

From Canterbury East Railway Station, follow the city wall to Castle Row and Rosemary Lane, then turn right into Stour Street, dropping into The Marlowe Kit, an exhibition centre and theatre space, to find out about the city’s rich heritage.

Head down Hawk’s Lane and left into St Margaret’s Street with its Canterbury Tales Visitor Attraction. Carry on along Mercery Lane and on to The Old Buttermarket.

Follow the King’s Mile to Kingsmead Road and take the footpath along the eastern fork of the Great Stour. Head over St Radigunds Street into Mill Lane, right into King Street and left into Orange Street and Sun Street with Christ Church Gate, the entrance to one of England’s most magnificent cathedrals.

From the cathedral, follow Burgate Street and Burgate Lane, picking up the line of the city wall again, then St George’s Street and St George’s Lane. Continue along Watling Street, Marlowe Avenue and St Mary’s Street and Castle Row into Dane John Gardens. Cross the footbridge back over Pin Hill to Canterbury East.

5. In the footsteps of Turner and Dickens from Margate to Broadstairs 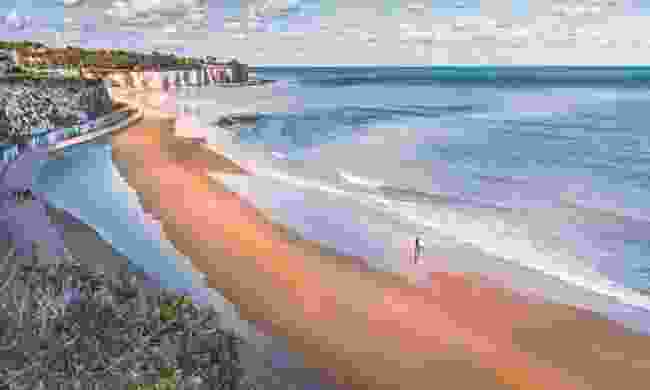 This four-mile walk cuts across the north-east corner of Kent from the coastal towns of Margate to Broadstairs, following in the footsteps of the great British artist, JMW Turner, and writer Charles Dickens.

Start at the Turner Contemporary gallery by the harbour in Margate, built on the site of Turner’s Margate home. Take time to view the works of Turner and other contemporary artists in the dramatic space of this seafront gallery.

From the art museum head for the old town, passing through Duke Street, Love Lane, Market Place and New Cross Street to Hawley Square, keeping your eyes peeled for the T&D signs that indicate the Turner and Dickens route. Look out for the Turner mosaics at St John’s Primary School in St John’s Street.

Follow Church Street, then St Peter’s Footpath past Draper’s Windmill, crossing the railway line. Continue along the countryside path towards the Church of St Peter’s-in-Thanet, where medieval priests also tread.

Walk through the churchyard and on to High Street and St Peter’s Road, looking out for the Dickens mosaics. Continue to Crampton Tower and onto the seafront at Broadstairs with its Dickens House Museum, celebrating the author’s long association with the Kentish coastal town.

6. Along the white cliffs of Dover 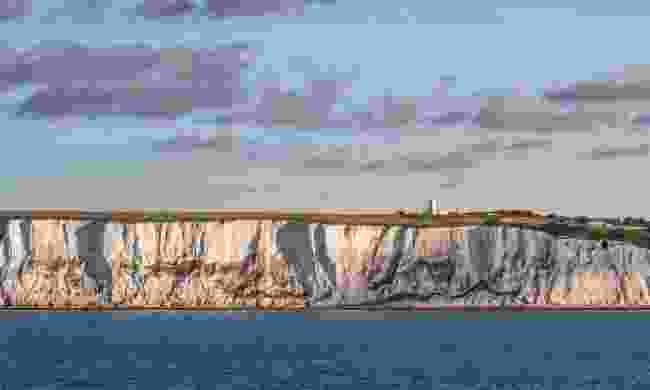 The South Foreland Lighthouse atop the White Cliffs of Dover (Shutterstock)

This exhilarating four-mile there-and-back walk heads across the chalk cliff tops from the edge of Dover to the lighthouse at South Foreland. Along the way, cliffs plunge dramatically to the sea below, sparkling chalk contrasting the navy seas that stretch across the English Channel to France.

Take time to stop off at the White Cliffs Visitor Centre with its information hub and coffee shop then stride out eastward, around Langdon Hole, part of an underground system with a radio command centre. Continue along the Saxon Shore Way, looking out for gun emplacements and remnants of other wartime structures.

For a slice of pure nostalgia, finish with cake and a cup of tea at Mrs Knott’s 1950s tearoom. A family friendly venue, the lighthouse keeper’s own family of 13 children crams into the gleaming building, that echoes the whiteness of the chalk cliffs.

7. Across the coastal desert of Dungeness 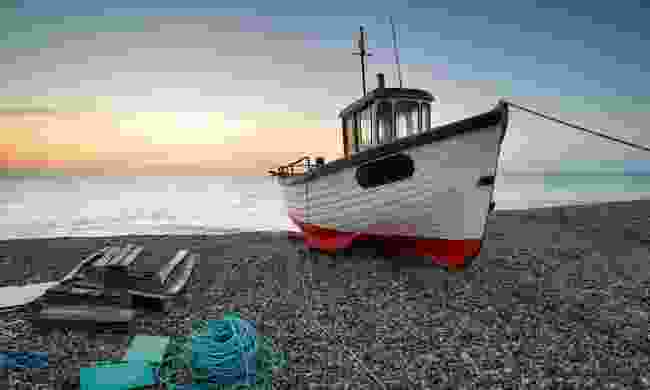 A working fishing boat on the beach at Dungeness (Shutterstock)

This three-mile circular walk explores the ever-shifting longshore drift, where the sea is constantly reshaping the sand and shingle. Starting at the old lighthouse, take time to climb the stairs to view Romney Marsh. The wide expanse of shingle beach with its industrial power station is a draw for bohemian artists and writers.

Head towards Britannia Inn, then follow the boardwalk over the spit. Retrace your steps to the road, where abandoned railway carriages have been converted into homes. At the second track on the right, walk towards the white house with painted red window frames and a series of outhouses.

Explore the abandoned fishing boats and shacks with their ‘recycled’ gardens before taking the path in the direction of the house with the square tower. Continue north along the main road to a black house with yellow window frames, once home to Derek Jarman.

Continue to the Pilot Inn, a good lunchtime option, then head for the white coastguard cottages. Follow the green public footpath sign to return back across the shingle to the old lighthouse.