9 of the best walks in Devon

From rugged coasts and wildlife-rich reserves to waterfalls, river valleys and moorland, Devon is best explored by foot. With two national parks and a UNESCO-listed coastline, you're spoiled for choice... 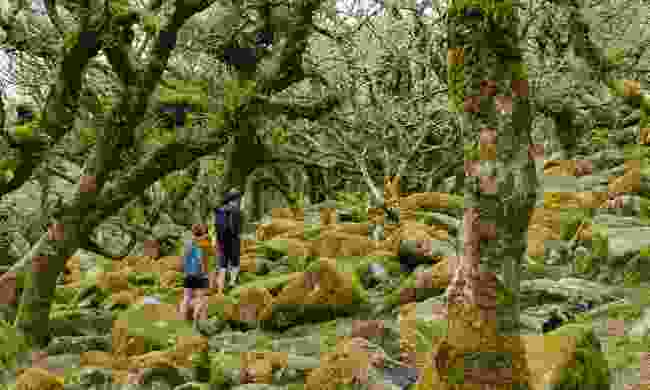 Wistman’s Wood is an easy three-mile walk on a waymarked path in the middle of Dartmoor National Park. Twisted and gnarled stunted oak trees are entwined with each other and covered in over 100 species of lichen.

Legend has it that the trees were planted by druids, and as you clamber over the moss covered boulders they grow among, it’s easy to let your imagination run wild.

The walk starts in the car park across the road from the Two Bridges Hotel on the B3357 and continues through Wistman’s Wood to the summit Longaford Tor, offering extensive views of Dartmoor and the infamous ‘Hairy Hands Bridge.’ On the way back to the Two Bridges Hotel, you’ll pass Crockern Tor, where local tin miners met to self-regulate their industry. 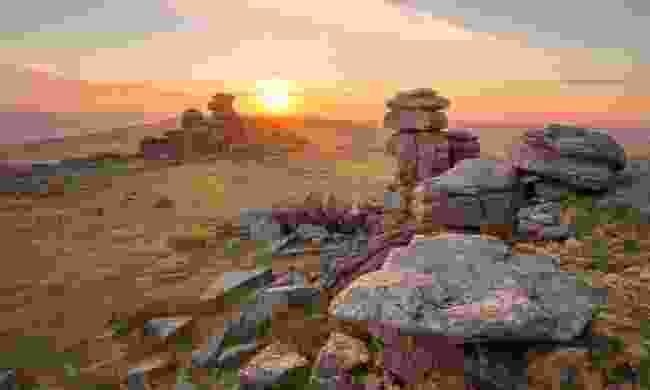 Visit one of the UK’s most dramatic tors and enjoy sweeping views across Tavistock and the Tamar Valley on this moderate to hard walk, in the western section of Dartmoor National Park.

Starting at the Pork Hill car park on the B3357, the walk takes you from the neolithic rock towers of Great Staple Tor, across a stretch of moorland to Langstone Moor Stone Circle and on to White Tor, once used by the military for target practice.

It's a wild and beautiful walk through granite outcrops and granite stacks, with views extending as far as Cornwall and the sparkling waters of Plymouth Sound. 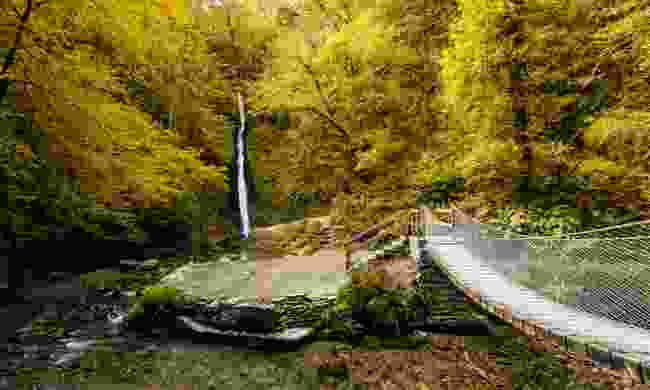 Short but dramatic, this walk through the steep-sided Lydford Gorge will reward you with ancient woodlands, rushing waterways and intriguing rock formations carved by the River Lyd.

The deepest gorge in the south-west, Lydford changes with the seasons. In spring, bluebells abound. In summer, a canopy of oak leaves enclose the gorge, while in autumn it is a riot of golden hues.

The walk is bookended by the imposing Devil’s Cauldron whirlpool at one end and the 30m-high White Lady waterfall at the other. 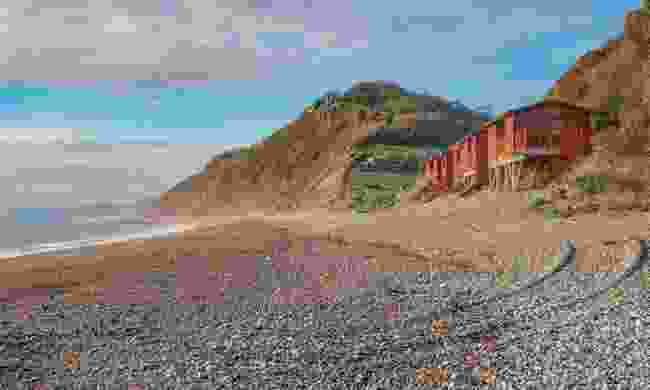 This is a popular coastal walk between the villages of Branscombe and Beer. Part of the South West Coast Path, it offers fantastic views of Devon’s UNESCO-listed Jurassic Coast.

Starting in the heart of Branscombe village, the walk takes you past historic forges, old bakeries and mills and along some of the best beaches in Britain.

The walk ends in the seaside village of Beer, which, as the name suggests, is blessed with a handful of traditional pubs where you can enjoy a well-earned pint. A quick detour along the Hooken Undercliff path will reward you with spectacular views of chalk pinnacles on the seaward side. 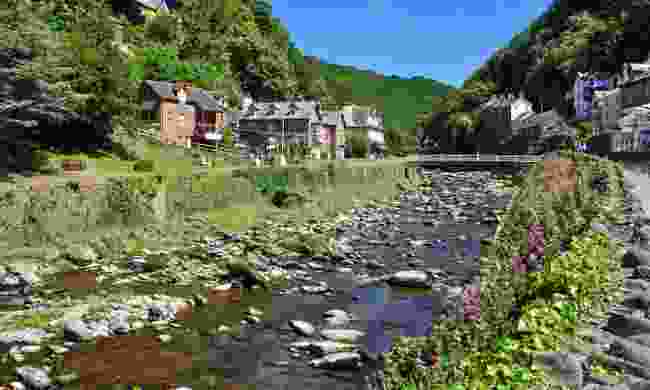 A favourite with the poet Shelley, this stroll along the pretty East Lyn River is regarded as the most beautiful in the region. Starting from the Lyndale Cross car park, the path follows the river to the tearooms at Watersmeet.

Then, after crossing a wooden bridge, a stiff climb up Myrtleberry Cleave leads to wild and dramatic views of the steep East Lyn gorge and the high cliffs surrounding Lynton.

The Victorians called the area Little Switzerland, but upon reaching the sea and the charming harbour at Lynmouth, the vibe is distinctly British. 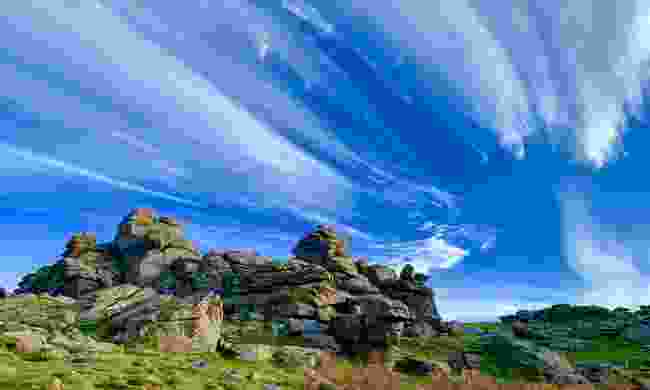 Nowhere is Dartmoor’s reputation as a land of ghosts, witches and dragons more keenly felt than on this moderate, five-mile walk to Hound Tor.

Said to have inspired The Hound of the Baskerville, the landscape here is bleak and chilling but eerily beautiful. The walk starts and finishes at the Haytor Vale visitor centre before taking you to Haytor Rocks then along a granite tramway to Holwell Tor.

Look out for the remains of a deserted medieval village. From the summit of Hound Tor, descend to Smallacombe Rocks before crossing Haytor Down to reach the car park. 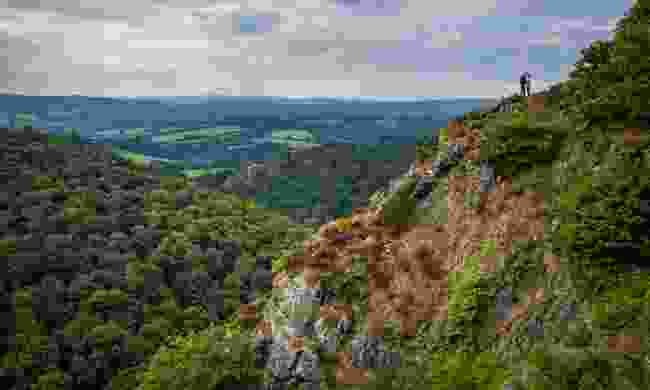 View across the valley near Drogo castle (Shutterstock)

Arguably the most famous walk on Dartmoor, this moderate walk begins at Castle Drogo, the last castle built in England, and follows an ancient hunter’s path high along the rim of a gorge overlooking the River Teign.

The views are spectacular, the wildlife is abundant and after descending to cross the river at Fingle Bridge, you’ll follow a fisherman’s path through stunning oak woodland, back to the castle. Fingle Wood is one of England’s largest woodland restoration projects, and a colourful spectacle in autumn. 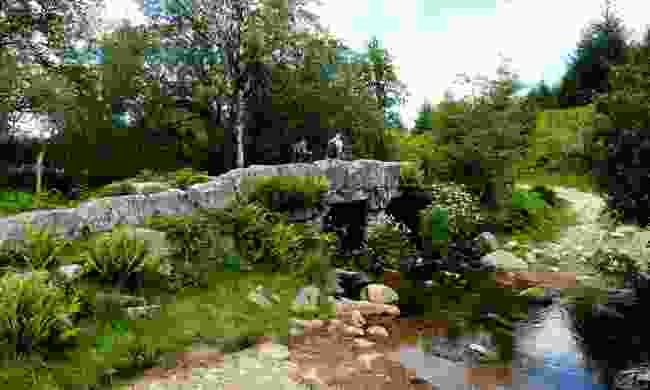 One of many reservoirs built across Devon during the 19th century, Burrator is perhaps the most picturesque, offering easy flat paths to follow, each offering fabulous views – including Sheepstor, which looms large above it.

It takes roughly two hours to walk around the reservoir, taking you past old bridges and granite walls, country lanes, moorlands and woodlands as well as the reservoir’s impressive dam wall. The route is popular with families and dog walkers. 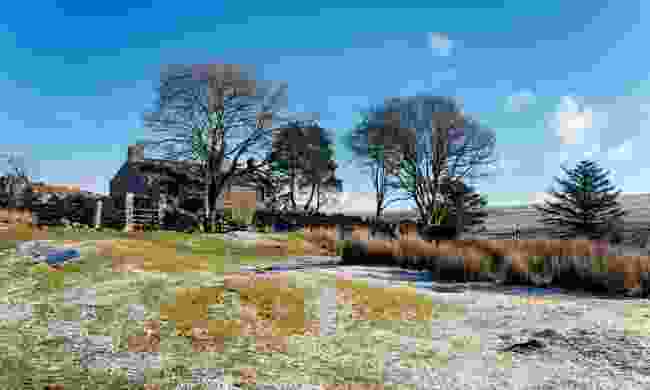 Said to have inspired Michael Morpurgo’s War Horse, this four-mile walk from Gutter Tor to Higher Hartor Tor packs in everything that people love about Dartmoor National Park, in an easy to moderate walk.

Starting at the National Park Visitor Centre in Princetown, the path heads out through the hills, taking in Ditsworthy Warren House, a Bronze Age burial site, the remains of a 19th century warrening area and majestic 360-degree views. When Steven Spielberg filmed here, he said he’d never seen such an abundance of natural beauty.