From waterfalls and iconic bridges, to intriguing trails in one of Scotland's most fascinating nature reserves, we reveal the best walks around Britain's biggest national park, the Cairngorms...

The Cairngorms - the mountain range named for Càrn Gorm mountain - stretch across north-east Scotland in an area of near wilderness. The range is so vast, its officially Britain's biggest national park.

From empty glens, deep corries and sweeping plateaus to wetlands, waterfalls and ancient pine forests, there’s a terrain type and a view for walkers of all styles, ages and abilities. Whether you like a simple stroll or a tamer trail, our picks for the best easy, stunning and trickier treks to tackle is sure to have something to suit you.

Here are 7 of the best walks in Cairngorms National Park...

1. The Falls of Bruar 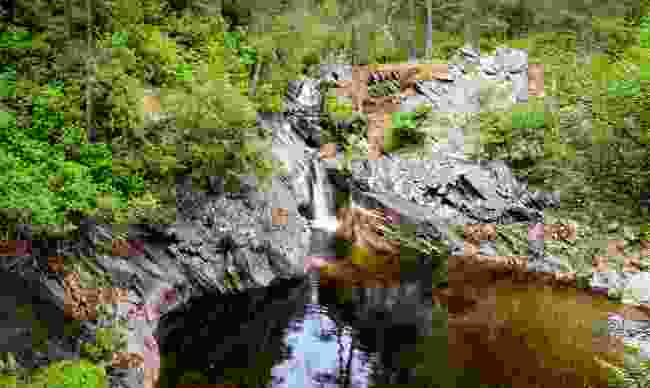 Short and dramatic, the one and a half mile walk takes in two bridges, two waterfalls and a deep-cut ravine.

Follow the riverside path through scented forests of larch, pine, rowan and birch - all planted at the request of Scotland’s famous poet, Robert 'Rabbie' Burns. The first waterfall and bridge are reached within minutes.

From here the path rises steeply, the gorge dropping away to the river far below. Look out for glimpses of the higher waterfall. At the end of the trail, the path curves round and crosses the second stone bridge, continuing down the other side of the glen, where views open out to the Grampian Mountains. 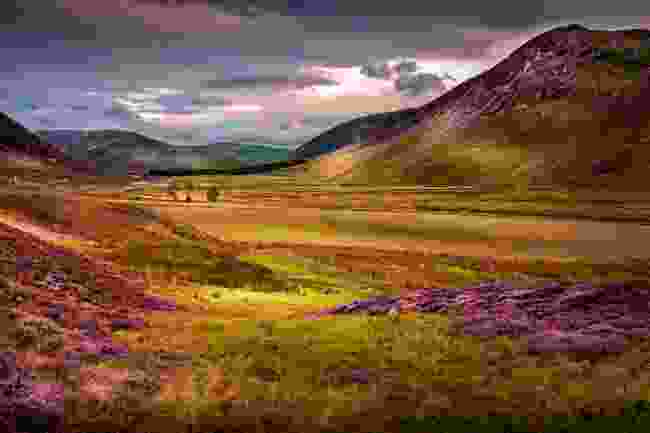 The mountain in Braemar, Scotland (Dreamstime)

Morrone sits high above the Royal Deeside village of Braemar. Though one of the lower-lying Cairngorm peaks at 2,815ft, it has wide-reaching views.

Starting out from Chapel Brae, just below a thousand feet, Morrone is an easy peak to bag. Rest on the summit, taking in the sweep of mountain plateau and forest, the weather research and radio relay station.

Before modern technology, an old hag lived in a shieling (hut) on the hillside, said to milk red deer. This region of Scotland is full of legends and stories. The route is a rigorous but glorious seven and a half miles hike.

Read next Five Reasons you must visit the Cairngorms 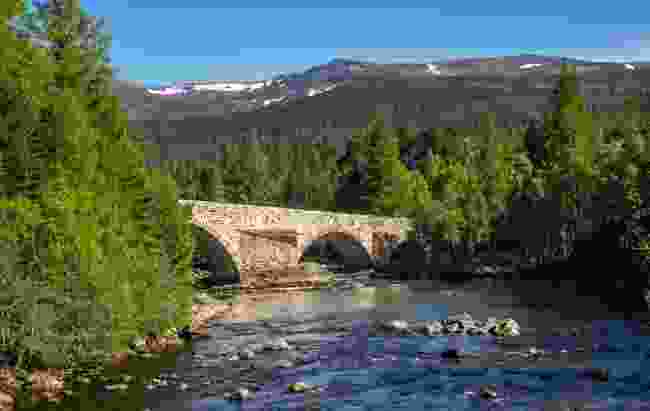 The old bridge over the River Dee (Shutterstock)

Ballater is just a few miles from the Queen's Scottish residence, Balmoral Castle. Once you've had a gander at the Royal's summer home, you'll begin this circular trail from Ballater town car park. The marked path will lead you to the old Deeside railway line, alongside the River Dee.

Count the seven bridges as you criss-cross the river and its streams. Some crossings are modest – blink-and-you'll-miss-them. Others are much grander, like the beautiful white-painted Victorian Cambus O' May Suspension Bridge, and the Royal Bridge on the edge of Ballater.

Along the way, you'll pass pine trees and moss-covered oaks. Following the dips and rises along the banks of this wide mountain river - fringed with conifers and pebble beaches - its easy to see why this part of Scotland, east of the Cairngorms, is such a Royal Family favourite.

4. Muir of Dinnet and Burn O’Vat 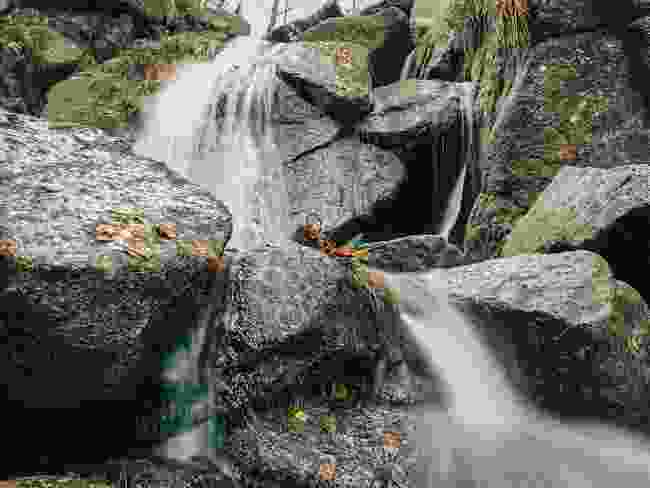 Muir of Dinnet National Nature Reserve is a land of mystery and intrigue. You never know what natural wonder you'll happen upon next. Take, for example, the rather unusual granite cauldron - which was formed by glaciers, and is accessed through a narrow squeeze.

Its also a fine place for walkers of all abilities, with numerous trails to enjoy. There’s a boardwalk along the wetlands of the Parkin’s Moss Trail, and dimly lit woodlands that lead to a waterside track on the Loch Kinord Trail - overlooking Castle and Crannog islands.

On the Little Ord Trail, there’s a crannog (ancient fortified dwelling) and a Pictish Cross - both worth seeing for yourself - from the Celtic-speaking people who thrived here, through the Iron Ages to Medieval times.

You can complete an eight mile walk, taking in all four trails, or choose just one of them, ranging from one to four miles. 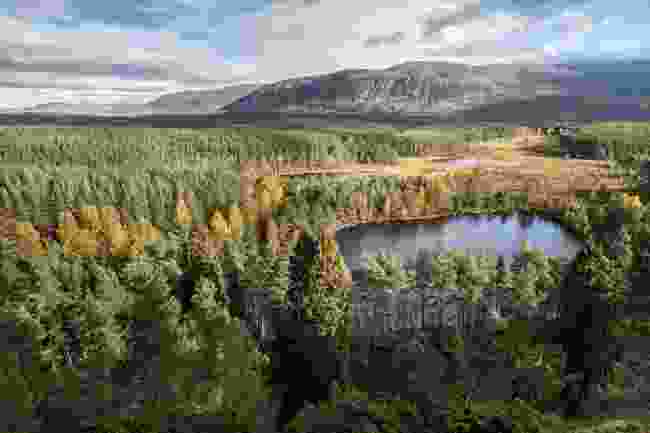 The two and a half mile walk begins at the forestry car park that lies deep within Glen Feshie. Follow the red marker, past one of the four lochans, and up to the top of Farleitter Crag.

Expect stunning views that take in the sweep of forested Grampian Mountains and Loch Insh, stretching out along the Spey Valley. Stand still, and if you're lucky, you'll catch the red squirrels shooting up tree trunks. 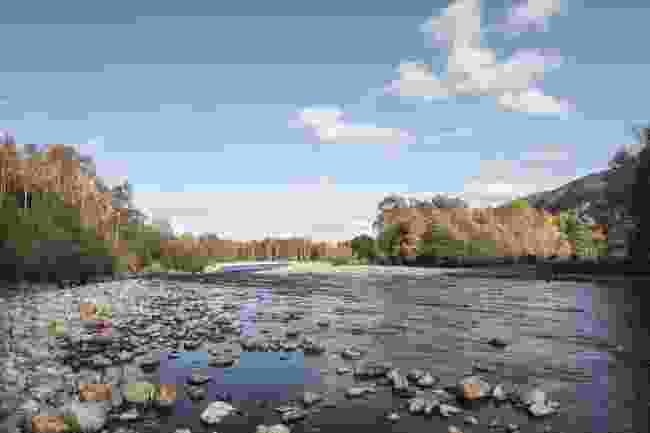 On the edge of River Feshie, the Frank Bruce Sculpture Trail leads through woodland to a walled orchard, the pathside dotted with striking, carved tree trunks and stone.

Ponder the Archetype, Thinker and Walker; the Man’s the Gowd, Sailor, Onlooker, Patriots and Third World. Bruce challenges our thinking on power, privilege and poverty with his sculpted imagery, unsettling in this tranquil setting.

Continue through the car park and follow the yellow waymarker to the banks of the River Feshie. At a bridge where the water gushes through a narrow ravine, continue on to open land with views of the hills across the glen, before completing this spectacular circular three mile walk where nature meets art. 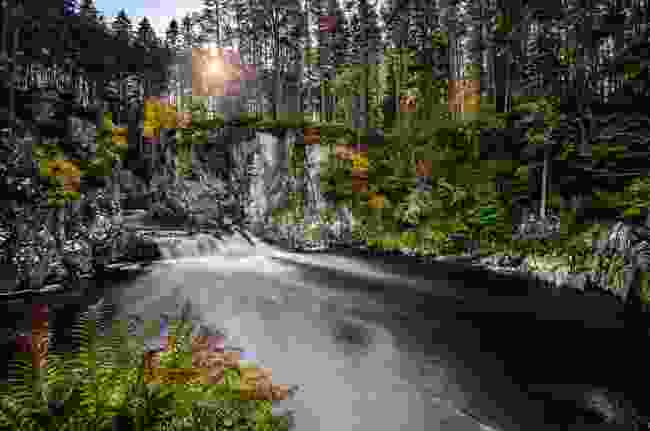 From Druim an Aird car park, beside beautiful Pattack Falls and gorge, cross the road and climb through woodland past an old quarry and lochan to a forest track.

Detour to an atmospheric abandoned settlement before continuing on along a ridge scattered with pines, to the summit of Black Craig and Dun da-Lamh Fort.

It’s an impressive site with the ground falling away on three sides. Enjoy far-reaching views before descending on this circular five mile walk. Take a well-earned rest or a dip beneath the falls after the strenuous ascent to the fort.

The best walks in Loch Lomond & The Trossachs

The best walks in the Lake District

The best walks in the Peak District