Full of colourful carnivals, bountiful markets and brisk autumnal hikes, Luxembourg’s rustic Ardenne region is the perfect short break when the temperatures drop. Here's why you should go there now

1: Enjoy jazz in a castle 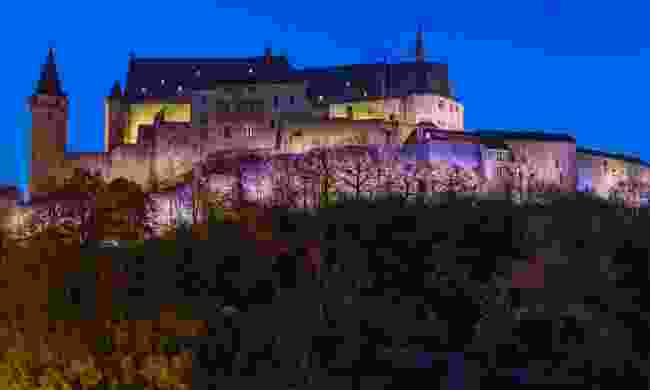 For such a ridiculously tiny country, Luxembourg has more than its fair share of castles (around 50), and the Ardennes region can claim some of the best. These ancient castles perch on rocky promontories above the forested slopes of northern Luxembourg. Vianden is possibly the pièce de résistance, a fine medieval palace complex sitting high above the River Our.

Throughout the autumn and winter, jazz and classical concerts are held at this atmospheric venue and the popular Christmas market takes place in the Knight's Hall. Nearby Bourscheid may lie partially in ruins, but it's an equally imposing landmark in the Ardennes countryside with its battlements and towers; motte and bailey. Clervaux Castle, a UNESCO site, houses a fine collection of documentary art photographs the "Family of Man" by Edward Steichen, a collection of Luxembourg's fortified castles in miniature, and a Battle of the Bulge museum. 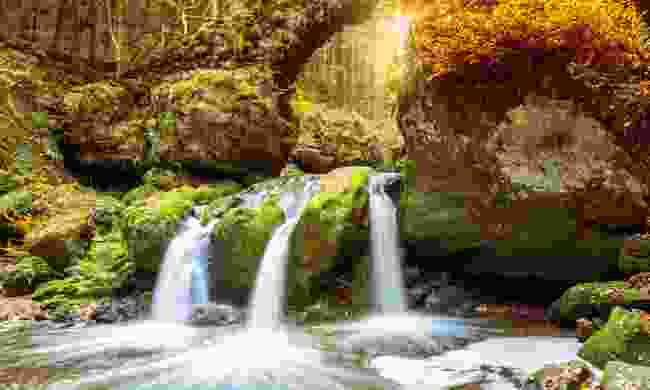 An autumnal waterfall in Luxembourg (Dreamstime)

The Escapardenne Lee Trail is 53 kilometres long and offers some of the best walking in the Ardennes. Winter walking has its own delights: forests of planted oak (the bark once used to treat leather), beech and pine look ethereal in the autumn and winter mists. Lichens and mosses spread across the hillsides and cover branches giving the woodlands a primeval feel. Around Kautenbach and Hoscheid, the ridge sections that fall away on either side feel more Alpine than Ardennes.

Along the way, there are some unexpected surprises: an isolated church in the woodlands; a crate of cola cooling in the brook beside an honesty box and a series of rustic instruments that are part of the Klangwee, the Sound Trail. A giant glockenspiel, marble run and a primitive telephone that transmits sounds along a pipe are a delight for both children and adults. The trail also invites you to tune into the natural sounds of the forest – the babble of river, popping of broom seeds and echo of rock.

3: Seek out the Ardenne’s quirkiest festivals 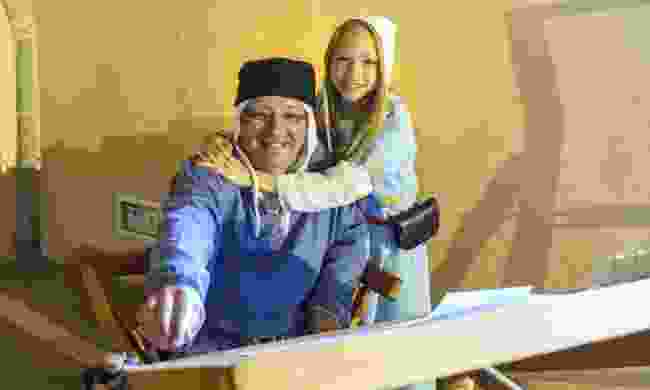 Father and daughter in traditional clothes in the Ardenne (Dreamstime)

As temperatures drop, Luxembourg lets it hair down, celebrating a number of unique and quirky festivals. At the Vianden Walnut Festival, the early October Veiner Nëssmoort, everyone goes nuts. Literally. The ubiquitous walnut is sold in every conceivable form in the streets that curve with the River Our beneath the castle. Apart from the jumbo bags of walnuts, visitors can buy walnut bread, walnut liquor, walnut pate, walnut pesto, walnut sausage and walnut cake - and if all the food on offer is making you hungry, you can settle down to a crepe filled with honey, and you've guessed it... walnuts.

Trauliicht is Luxembourg’s Halloween and best experienced at Robbesscheier at the end of October, beginning of November. Traditionally, turnips were made into lanterns across Luxembourg and placed by stables to keep the winter spirits from harming farm animals. Over the Trauliicht week in Robbesscheier, children imaginatively sculpt evil-looking lanterns and parade them through the streets, before winter spirits are burned on a large bonfire.

Finally, head to Vianden on St Martin's Day (11th November). Miertchen heralds the beginning of winter and is celebrated with fire-swinging, rowdy singing and enthusiastic chanting. It's an energetic, noisy affair that finishes with the lighting of a bonfire made of spruce trees wrapped in rags and straw. Luckily, Health and Safety hasn't caught up with this fire-playing festival yet.

Oh, and those fires you see lit across hilltop Ardennes? That’s just the villagers competing to see who has the biggest and brightest bonfire and whose can be seen from furthest away. The Buergbrennen  (bonfires complete with a large wooden cross at their centre) are lit across the country mid-February to chase away the winter, while torchlit processions and warming barbecued food also do their bit to stave off the winter blues.

4: Warm up at a winter carnival 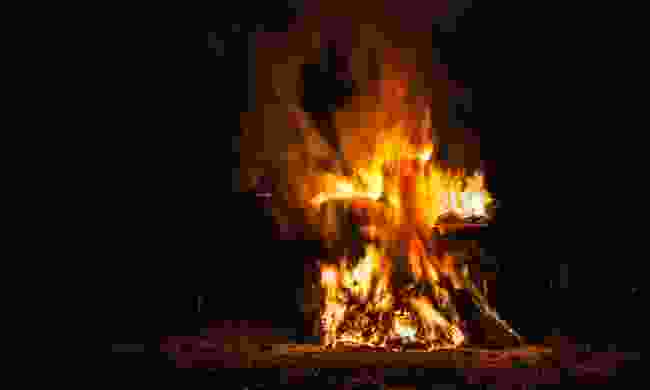 A bonfire in the Ardenne (Dreamstime)

In that long, dark stretch between Christmas and Easter, Luxembourg hosts a number of carnivals that reak up the dreariness of winter. The festivals take place between Candlemas Day and Ash Wednesday – February through to March. It's a great way to mingle with the locals and experience the culture of the Ardennes - and the Luxembourgers know how to party.

Carnival starts with Liichtmëssdag or Candlemas and finishes with Carnival Sunday and Monday.  On Carnival Sunday, hundreds of kilos of sweets rain on the crowds from decorated floats in Diekirch at the Cavalcade. The streets are filled with music and the carnival-participants, dressed up cartoon-style, play to the crowds as local dignitaries and international politicians... and more conventional clowns.

During carnival the street stalls sell winter comfort food, cheap and filling. Apart from the usual fare of Currywurst (sausage) pizza slices and pomme frite, Bou'neschlupp, a Luxembourgish favourite, is a tasty soup (despite its name) made with green beans and bacon, and if that doesn't warm you up there's always a spiced-filled glass of glühwäin, mulled wine. Doughnuts are an essential part of the carnival experience and come in all shapes and sizes – some with amusing names. Verwurrelt Gedanken (scrambled thoughts), Nonnefäscht (nun's farts - very appetising) and the mouse-shaped Maisercher are just a few of the icing-sugar coated doughnuts to try.

5: Walk amongst the winter lights and Christmas Markets in Luxembourg city 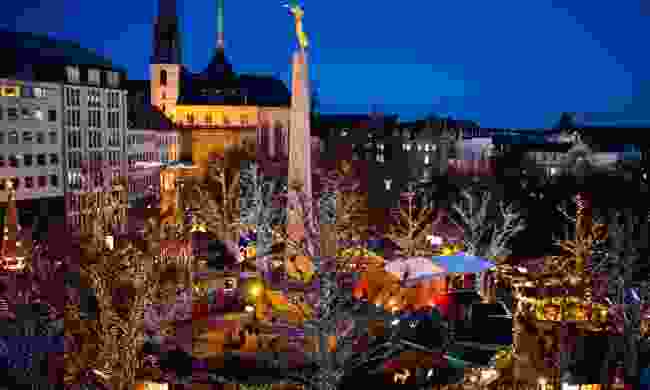 Before heading for the airport, make sure you schedule in time for the capital. In the run up to Christmas, the city's trees twinkle with fairy-lights, the old town's decked out with opulent Christmas decorations and the main market squares crammed with stalls to match the best Christmas markets across Europe.

Highlights over the festive season in the city include the Opera of Lights with its light projections and animations, the ice-skating rink, wine and crément tastings, the Saint Nicholas parade and the 200-odd Christmas concerts taking place around the city. But this historical city (a UNESCO Site) and sophisticated metropolis stuffed into the sides of a deep ravine and teetering on the tops shouldn't be missed whatever time of year you arrive.

Helen Moat is the author of Slow Travel The Peak District, published by Bradt Guidebooks. She blogs at Slow Travel Peak District and Slow Travel Beyond. She's currently writing a book about her very slow cycle to Istanbul from Rotterdam.

For more information on the Luxembourg Ardennes drop by visitluxembourg.com.