Ras Al Khaimah: Discover the UAE's cultural and adventurous side

Embracing its dramatic natural landscapes, Ras Al Khaimah is the secret Emirate brimming with unexpected adventures and shining a light on the country's fascinating heritage...

There’s a dozen of us floating out at sea, but the deck is as quiet as the motionless water as we wait in anticipation for our local guide to slice open an oyster. Once the shells are eased apart, he begins to (what I can only describe as) 'massage' the insides of the mollusc. I daren’t blink in case I miss the moment. Then suddenly, out pops one tiny yet perfectly formed pearl and a choir of ‘wows’ breaks the silence. Bilal had spent the morning teaching us about the past pearling trade in Ras Al Khaimah. A history I was not aware this modern country had.

After spending just a few days in this northern corner of the United Arab Emirates, my perception of the country's authenticity had changed. Dubai’s glamourous yet manufactured façade had clouded my judgement, and although Ras Al Khaimah (often shortened to RAK) is less than an hour from the city of skyscrapers, it’s truly a different world. Pristine coastline and luscious mangroves quickly change into rolling desert sands, and then into dramatic layered limestone mountains. RAK embraces its breathtaking topography, and within this secret Emirate, plenty of adventure, culture and nature awaits. 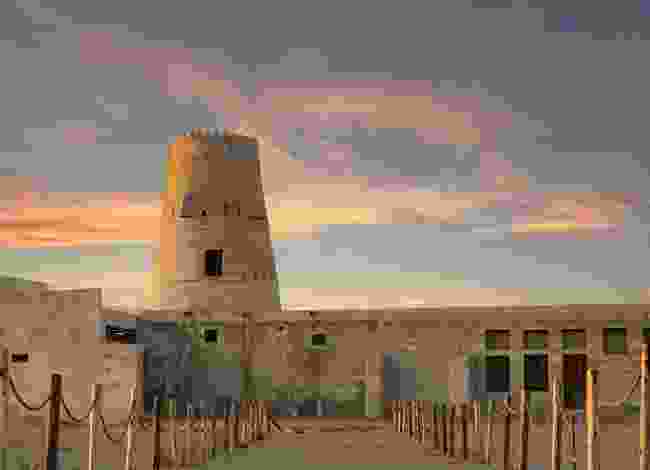 Currently on UNESCO’s Tentative List is Al Jazirah Al Hamra. Head to this old fisherman’s town, once a tidal island, to explore its 280 remaining buildings, many of which have not been touched since its construction around the 17th century. More than 4,500 people used to live in this village, but when the discovery of oil took over the pearling trade in the 1940s, residents started moving away and eventually left the town abandoned. Now, the last remaining authentic village in the UAE has become an open-air museum, where you can stroll between watchtowers, mosques, suqs and houses made mostly from coral stone and beach rock.

During February and March, the village comes to life for the Ras Al Khaimah Fine Arts Festival. The colourful event has just celebrated its 10th anniversary, displaying more than 150 artists' sculptures, paintings, and photography: a fascinating contrast to the historic ruins.

Step into the past at the national museum 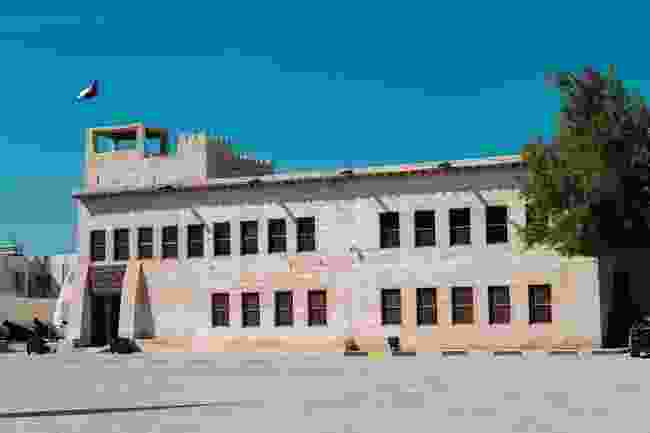 RAK history dates back to the Stone Ages (RAKTDA)

Go back in time at the National Museum of Ras Al Khaimah, located on the outskirts of the city. The building itself was first constructed as a fort in the 1890s for protection against the attacking British (typical), then latterly becoming a royal residence, a prison, and finally a home to the most remarkable Ras Al Khaimah artefacts. Duck your heads under the low door frames to enter each room and discover a new historical gem, and piece together RAK's long-running history. Archaeological findings date back to when RAK, previously known as Julfur, became a settlement in the Stone Age, with fragments of pottery, jewellery, glass and even early signs of makeup found on shells. You'll also learn the importance of date palm trees to Arab Culture, and see the functions of a date juicing room. 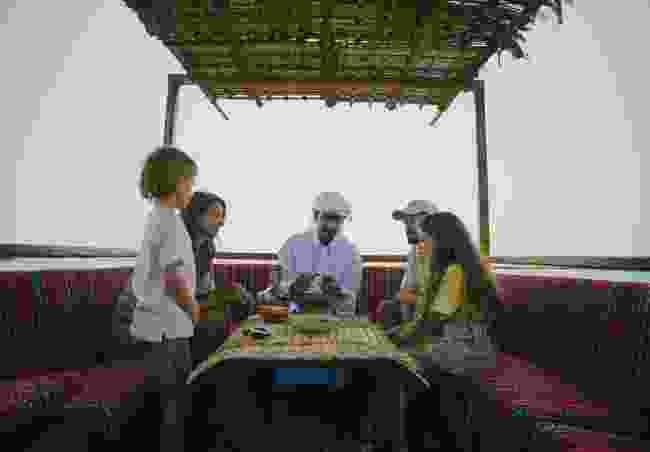 Jump aboard a traditional wooden vessel and enjoy a peaceful journey past mountains looming from the sea, and mangroves filled with dusky pink flamingos, before docking in the middle of Gulf waters at a permanent floating platform. Ras Al Khaimah is home to some of the world’s oldest pearls, and at Suwaidi Farm, you will learn about the Emirate's fascinating history of pearling, a trade that was thriving back in the 12th century, and understand why it's still important to Emirati culture. You get an insight into the tough conditions fisherman used to live in, ‘sleeping on boats like sardines’ for months on end, and also discover the dangers which faced the pearl divers, who clipped their noses with turtle bones and dropped to the ocean floor by tying their feet to rocks, collecting around 2-3 kilograms oysters each day.

After this educational experience, you can tuck into a scrumptious locally-sourced lunch of chicken, fish or vegetables with rice, before farming your own pearl to take home with you.

Read next The best things to do in Bahrain

Climb to a hilltop fortress Standing proudly on a 70m natural mound is the UAE's last remaining hilltop fortress. Dhayah Fort may only have been reconstructed from mud-brick in the 19th century, but the history of the fortification dates back much earlier to the Late Bronze Age, making it another contender for a UNESCO-listed status. The site is mostly associated with the attack of the British against the local Qawasim tribes in 1819, and it remains an important monument to the Emiratis. You will need to climb up 239 steps to reach the fortress, but the dazzling natural surroundings of palm groves, mountains and the Persian Gulf make your efforts worthwhile. You can even spot Suwaidi Pearl Farm from up here. 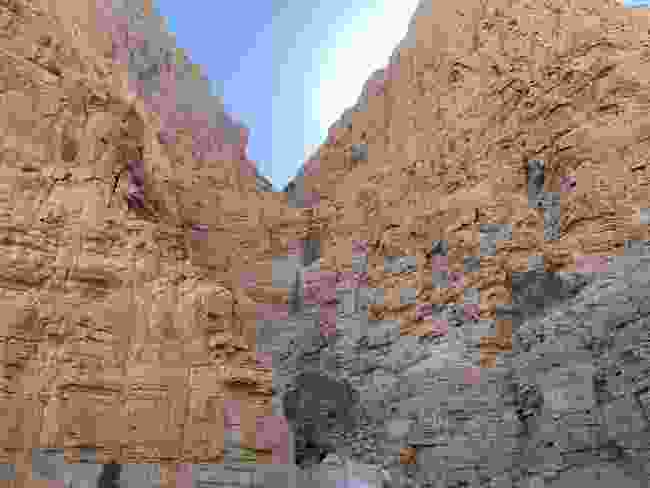 The mountains in Ras Al Khaimah are really only just being discovered. In the past three years, 80km of hiking routes around Jebel Jais, part of the Hajar range which stretches into Oman, have been officially mapped out. These routes are not available to the public however, so it’s strongly advised to book a guide for your own safety. The White Wadi is a trail through a dried valley, which involves an entertaining scramble over loose rocks which often change position when the region experiences its rare rainfall: estimated to happen only three times per year. Along this route, you'll able to see a dried waterfall, spot pink asphodel flowers and perhaps even meet the mountain's resident goat, Tina. 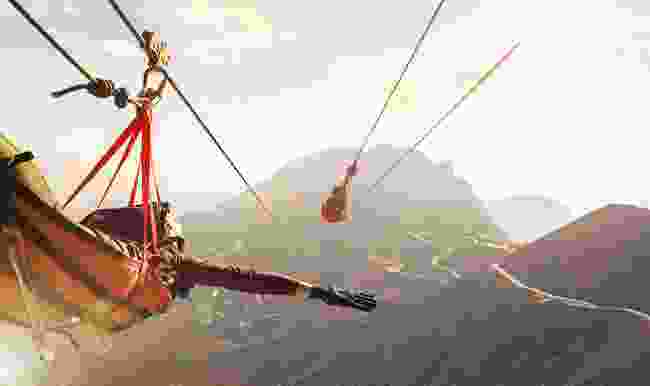 Jais Flight is the longest zipwire in the world (RAKTDA)

Daredevils will be delighted by Ras Al Khaimah’s most exciting (or terrifying) attraction. Jais Flight is the world’s longest zipline at 2.8 km long. Get kitted up in a bright orange suit, harness, helmet and Go Pro before making your way up the mountain’s winding roads to reach the highest point in the entire United Arab Emirates (1,934m). Prepare to be hoisted up to the zipwire, head facing down with legs suspended in the air, before being sent for a two-minute flight, viewing the ground far, far below from a birds-eye-view, and reaching up 160km per hour as you soar from peak to peak. For those left wanting more, Jais Sledder has recently opened nearby offering an adrenaline-filled toboggan ride down a track on the side of the mountain.

Get close to local wildlife 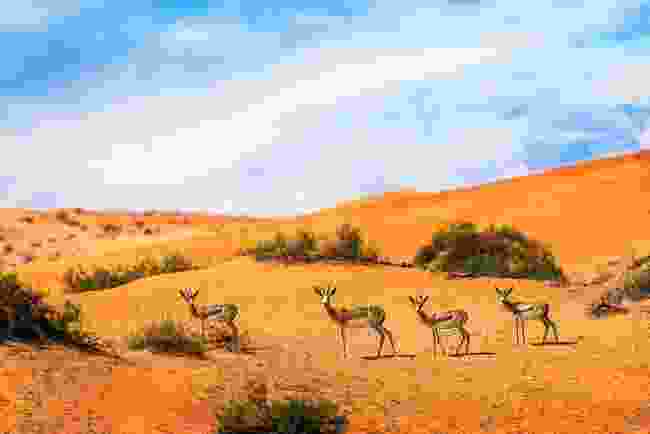 The landscapes changes once again as you head from the magnificent mountains into the vast desert. Al Wadi Desert Nature Reserve covers 1,235-acres and is, surprisingly, home to an extraordinary amount of protected wildlife, including bright-coloured bee-eaters, desert foxes and the country’s national tree, the Ghaf.

Have a close encounter with UAE’s native animals during a morning wildlife feeding tour. On this safari-esque experience, you'll get strapped into a 4x4 for an exhilarating ride over large sand dunes before stopping off in the middle of the desert, where your guide will call out to local Oryx. Before long these large antelope with gigantic horns will trot into appearance and tuck into some dry food alongside your vehicle, providing one of the most exciting wildlife experiences.

Sip sundowners in the desert 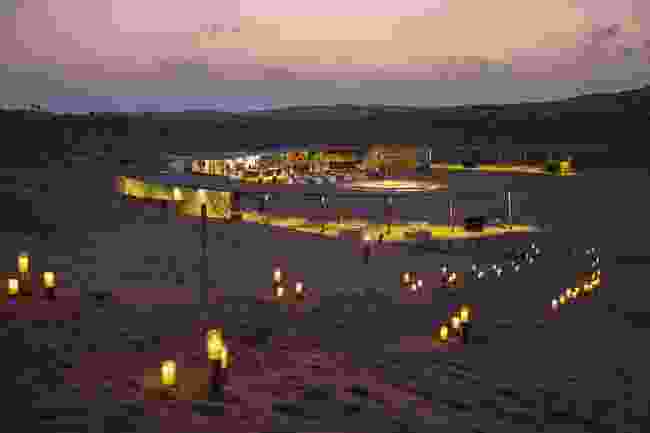 Have an enchanting evening in the desert at Sonara Camp (RAKTDA)

Camel rides, archery and duneboarding are all activities you can take part in at Sonara Camp, a desert hideaway located within the grounds of Ritz Carlton Al Wadi. If you'd prefer some downtime, simply lounge on a luxurious beanbag in the camps' chic set-up and order a cocktail while admiring the awe-inspiring desert, and perhaps even catch a glimpse of the local wildlife. What makes this experience even more enchanting is the orange glowing sun as it sets over the dunes, without a cloud in sight. But the pièce de résistance is the dining experience under a tent of fairylights, where a feast of Mediterranean and Arabian ingredients are served, from seasonal vegetables to locally-caught fish. Tuck into the carefully curated dishes while being accompanied by performances from violinists and even fire-breathers.

For more information about your trip to Ras Al Khaimah, head to visitrasalkhaimah.com

The author travelled with Ras Al Khaimah Tourism Development Agency (RAKTDA) and stayed at the Waldorf Astoria Ras Al Khaimah. Seven nights for two people in a King Premier Room with Seaview at half-board rate costs from £4,534. Direct flights with Emirates are included.

15 extraordinary things to do in the UAE