9 of the best things to do in Madeira

Famous for its cake, wine and Cristiano Ronaldo’s right foot, the Portuguese island of Madeira offers year-round adventure. Here's what to see and do while you're there...

1. Make a splash with whales and dolphins 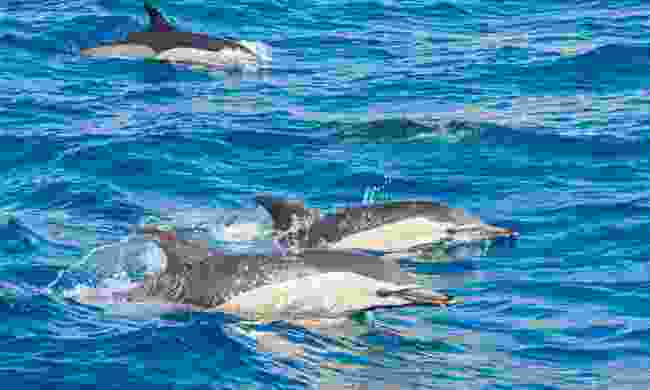 Dolphins swimming off the coast of Madeira (Dreamstime)

Head out on a RIB off the coast of Madeira, at any time of year, for almost guaranteed sightings of whales and dolphins.

There's a good chance you'll see the largest animal in the world, the sperm whale, diving nearby. Also on display is the fin whale, the second largest animal in the world, most likely to appear boat side during spring (March to May). Other species to look out for are groups of easily-spotted pilot whale and the high-spirited Bryde’s whale, most often seen splashing around with the dolphins during Spring.

Pull on a snorkel and jump overboard to swim with the smaller cetaceans. Along with playful spotted dolphins and wrongly-named common dolphins (arguably the most beautiful), if you’re lucky you may also be able to swim alongside the rarer rough toothed and Risso’s dolphins.

2. Be charmed by the leafy capital, Funchal 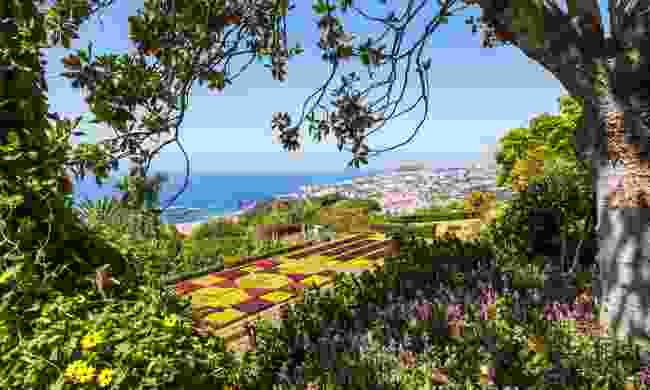 Backed by verdant mountains with its pockets of sculpted gardens and wild forests, leafy Funchal is enough to turn concrete capitals around the world green with envy.

The hillside Madeira Botanical Garden’s neat rows of primary-coloured plants stretch like an infinity pool above the blue ocean below. The nearby Palace Tropical Garden offers three layers of exotic plants entwined with art from all over the world. Thousands of Zimbabwean sculptures are housed here, along with a very special tile collection lined up along the walkways.

Get your culture fix at the sky-dominating Sé cathedral. It’s part brick-exposed, part white-washed exterior gives a modest first impression, but the bright gilded ceiling on the inside paints a much more magnificent picture.

Soak up the atmosphere of the island at the Farmer’s Market. Don’t be fooled by the name. Just as eye-catching as the bright fruit and vegetables on display is the architecture. Designed by João Rodrigues, Madeiran blue tiles decorate the stands and punters are shaded by the leafy plants above. 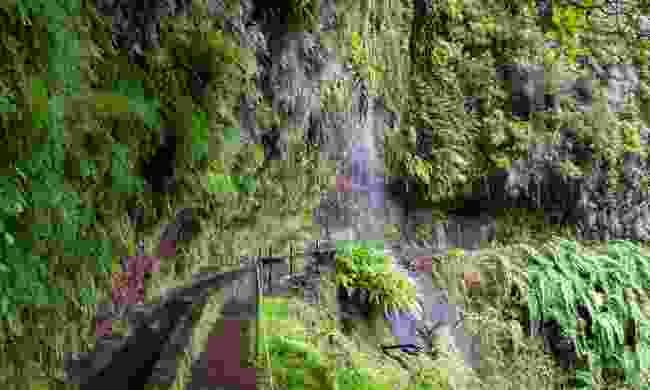 Carving their way through the whole island are the historical levadas. These irrigation systems-turned-walking paths are a great way to explore all corners of the island by foot. There’s many to choose from, which will take you through a variety of landscapes, show off stunning sea views, and leave you at the foot of jaw-dropping waterfalls and on the edge of azure lagoons.

Waterfall lovers should opt for Levada das 25 Fontes, which will take you 1000 metres above sea level to a 100 metre-high Risco waterfall, merging and splitting into various streams as it works its way down the rock paths it’s etched out for itself.

If you only have time for one levada make it the Levada do Rei, winding its way through the UNESCO-listed Laurissilva forest. Dubbed Kings Levada, this is definitely a path fit for royalty. You’ll pass rugged cliff faces, a variety of plant life and will enjoy many species of birds, all under the shady green canopy of the largest surviving area of laurel forest in the world.

4. Step over the edge of Europe's highest cliff 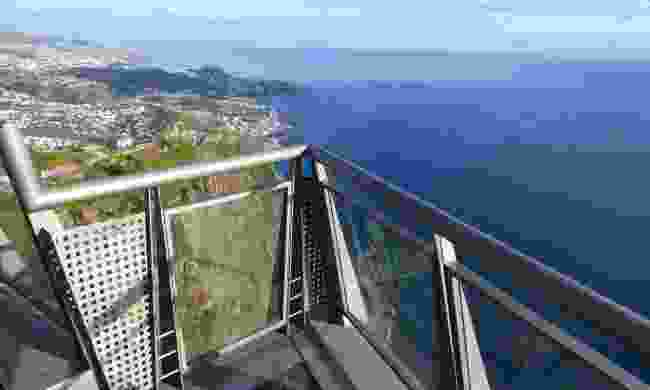 Dare to look down on Cabo Girão Skywalk (Shutterstock)

As if Europe’s highest cliff (and the second highest in the world) isn’t scary enough at 580 metres tall, Cabo Girão has been made even more thrilling than nature intended with the construction of the Skywalk.

After a steep 6km climb to the top you can step over the edge and onto the glass-bottomed platform, where the Atlantic ocean spits and froths far below your feet. Those brave enough to trust this vertigo-inducing floor will be rewarded with some of the most beautiful views on the island. The surrounding house-dotted cliffs cut a jagged line through the skyline before plunging into the sea below.

Once you've finished drinking in this view, catch the cable car back down to where you can feel the earth beneath your feet.

5. Experience an alternative angle by canyoning 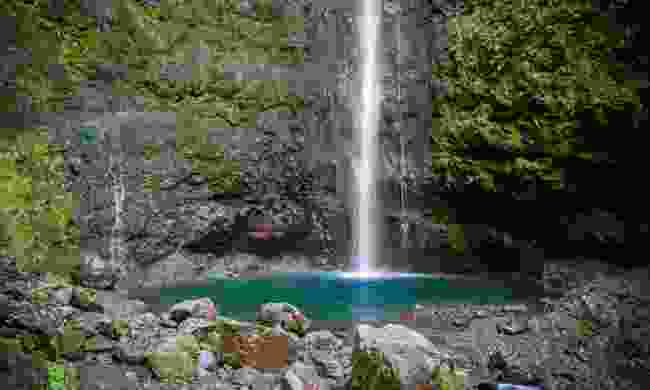 The rugged landscape of Madeira sets it up perfectly for a thrilling canyon adventure. Head to Paul de Serra and scramble over the bed walls of the Lageado river, to tackle abseils of up to 40 metres and daring jumps from 30 metres high.

Don’t forget to appreciate the beauty on your way down. With numerous waterfalls sparkling in the sun and crystal-clear lagoons reflecting the green of the rocks around them, with the turquoise of the sky up above, this is a unique way to see a different side to the natural world surrounding you.

6. Witness a cloud inversion from one of Madeira’s three peaks 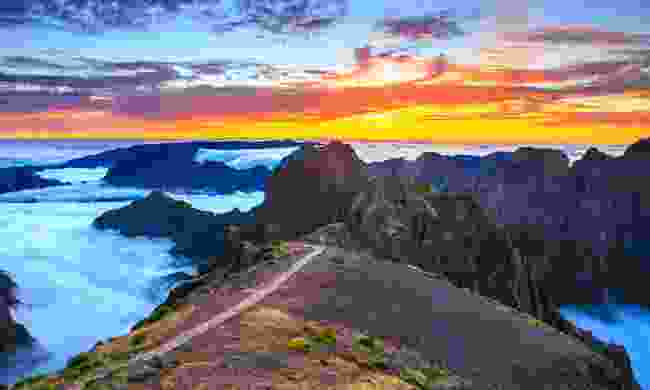 The clouds falling below the peaks of Madeira's highest peaks - Pico Ruivo, Pico do Areeiro and Pico das Torres (Shutterstock)

The highest peaks of Madeira – Pico Ruivo, Pico do Areeiro and Pico das Torres - offer unparalleled views of the island, and beyond.

Start with the smallest and easiest of the three, Pico do Areeiro. Right at the top viewpoint, you'll see Curral das Freiras (Nun’s Valley) dwarfed by height, looking almost like a toy town. On a clear day, your eye will stretch as far as the nearby island of Porto Santo.

Take the rock-carved path that connects the third highest peak to the first, stopping in the middle to appreciate the view from the second highest, Pico das Torres. Dare to look down into the cauldrons lying between the surrounding mountains.

Continue along the heather-clad path to the most challenging, Pico Ruivo. Not only is it Madeira's highest, but it's the third highest peak in Portugal at 1862 metres tall. The difficult climb will be worth it when you realise the clouds are below you, covering the base of the mountains in a magical white mist, their jagged tops poking above, rising and dipping like castle turrets. 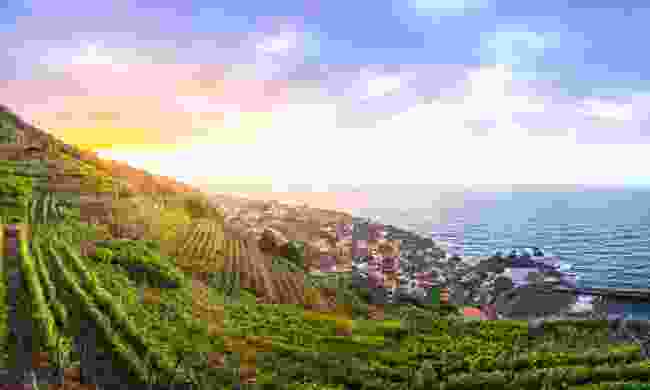 The rolling vineyards of Madeira (Shutterstock)

You can’t go to Madeira without trying its famous fortified wine. Combine a wine tasting tour with an idyllic picnic in the vineyards, trying wine both traditional and more modern.

With vineyards rolling down the volcanic slopes, stopping just short of the sea, wherever you choose to set down your blanket and hamper, you’ll be surrounded by stunning scenery.

Sit between the rows of neatly growing grapes, enjoying a lunch made all the sweeter by the wines laid out for you. Learn more about the history, importance, production, and complexities of the most famous drink on the island from an expert as you sip.

8. Take a trip to Porto Santo 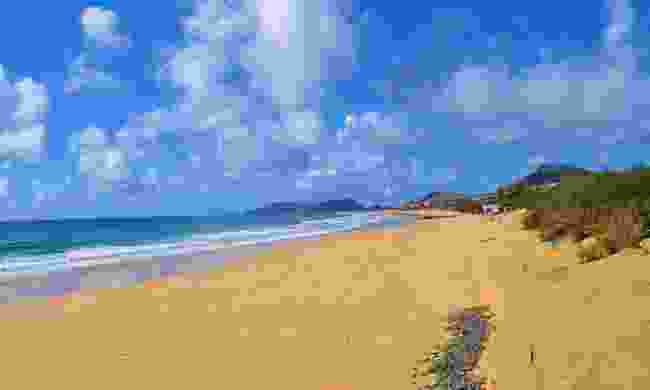 Jump on a ferry and in just two and a half hours you’ll be looking back at Madeira from its smaller, quieter neighbour Porto Santo. This beautiful outpost isn’t nicknamed the golden island for nothing. With a 9km stretch of sun-kissed sand, Santo Porto offers the perfect place to relax after adventuring on Madeira.

If you’re not a beach lover, then this one isn’t for you. The coastline is really the only reason to come here. However, beach junkies will be in paradise. Warm your back on the golden sand or go for a swim in the warm waters, all in the shelter of the tree-speckled mountains.

For those that are seeking something more active, Santo Porto is a great jumping off point for diving. The warm waters draw a myriad of marine life, so keep your eyes peeled for cuttlefish, starfish and even octopus. 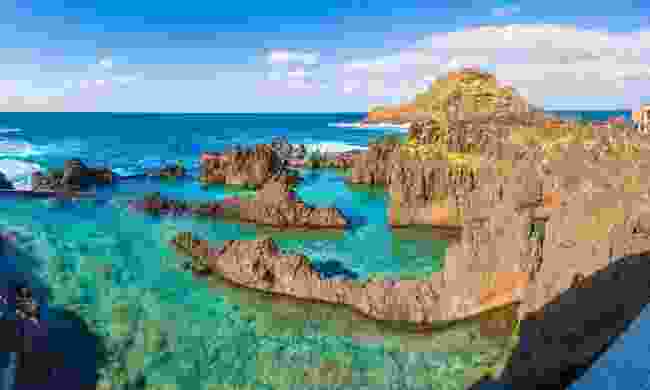 These are the rock pools of your childhood dreams. Formed by the very eruptions that created Madeira, the volcanic rock craters of Porto Moniz sit conveniently in the shallows of the sea, so you can easily clamber into the mineral-rich waters to cool off.

Lay back in the sun-heated pools, appreciating the view of the darker, deeper ocean just beyond the wall. Watch out for the waves, which will every so often send fresher, colder water crashing over the edge and into your own natural bath.