7 of the best summer walks in the UK 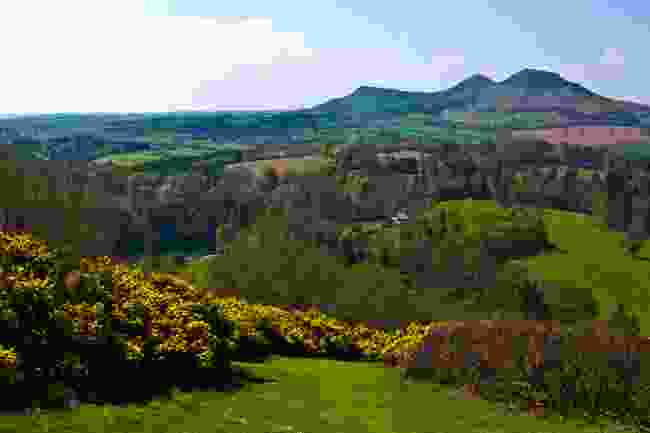 The seven-mile walk has some short, sharp ascents, but you’ll be rewarded with panoramic vistas from the three summits of the Eildons, each with its own perspective over the Scottish Borders.

The hike starts from the pretty village of Bowden, its white-washed and stone cottages grouped around the tree-lined main street and village green and backed by the hills.

Come in late summer when the heather is in full bloom on the slopes, bag the three peaks and explore the abbey town of Melrose on the River Tweed before following St Cuthbert’s Way back to your starting point.

Head up through the common, sandwiched between Commonside and Feuars Park in Bowden, the triple peaks of the Eildons filling the skyline above you. Just after the path bends left, turn right along a strip of trees, cross a farm track and into woodland.

Follow the path to the west of the Eildons and onto Eildon Wester Hill, the lowest of the three peaks. Continue to Eildon Mid Hill, the highest at 1,385ft, then bag Eildon North Hill, a prehistoric fort surrounded by ramparts.

From the three summits, take in the views over the mauve slopes of heather in August, then tumble down to Melrose, a handsome market town renowned for its medieval abbey ruins and linked to the legendary Anglo-Saxon saint Cuthbert.

Stop for lunch in one of the chic tearooms before following St Cuthbert’s Way over the saddle and back to Bowden through Broad Wood. 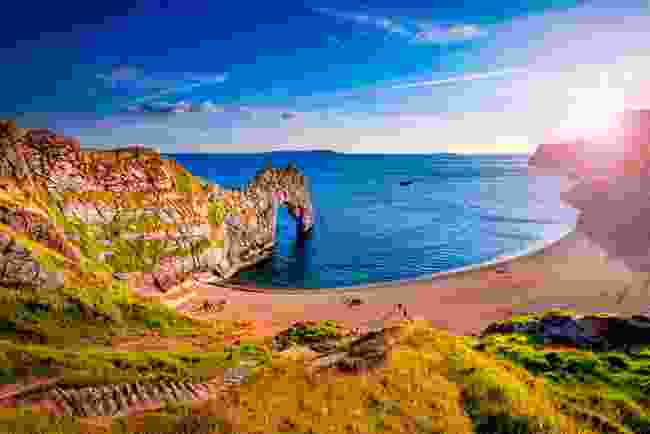 Durdle Door illuminated by the sun in Dorset, England (Shutterstock)

With unusually-named checkpoints like Man O’War, Durdle Door and Bat’s Hole, expect a fascinating six-mile stroll along the Dorset coast.

This is a walk of steep ups and downs along the chalk cliffs, but you can enjoy a cooling swim at Man O’War Beach at the end of your hike. Bring a picnic and settle down on a cliff top, with far-reaching views across the sea.

From Durdle Door Car Park, the chalk path drops down steeply to a crossroads of paths. Follow the fingerpost pointing the way to Durdle Door along the wide chalk path, with breath-taking views of jagged cliffs, the sweep of  bay and its natural arch. Drop down to the beach and be dazzled by the white of sand, contrasting the brilliant blue of sea and sky on bright summer days.

Continue up the steps to follow the South West Coast Path west. The coastline is dotted with rocky outcrops with fanciful names: The Bull, The Blind Cow and The Calf. At Bat’s Head, you’ll find another natural arch: Bat’s Hole.

When you reach the stone marker pointing to Dagger Gate, head inland and follow the fence. The path bears right and crosses fields between two beacons. Continue east, keeping right to reach Newlands Farm. Head south past the campsite back to Durdle Door Car Park. 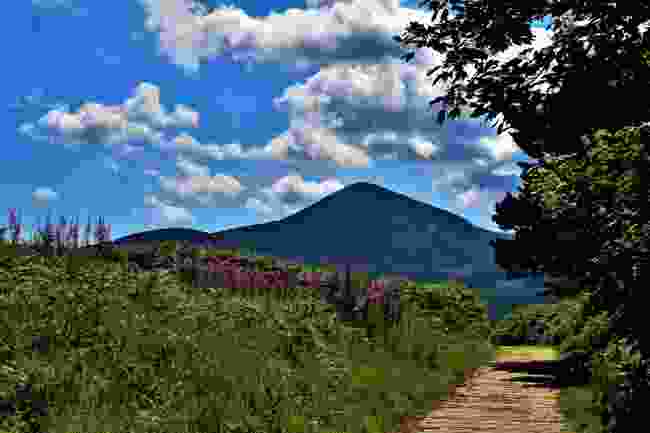 What an amazing, mile-long summer ramble: a 6,000 year-old dune system that’s home to rare wildflowers and 600 species of butterflies.

When the boardwalk drops down to the sea and you head south-west along the beach, the mountains of Mourne fill the skyline.

Start from the car park on the A2, cross the road and follow the Murlough Bay Trail across the dune system, keeping left to reach the coast along the boardwalk.

Turn right to walk along the shore, keeping an eye out for a white, blue-tipped post. Follow the path back inland through the dunes to the National Trust car park.

Drop into Murlough Cottage Café for a warming bowl of soup, then head east to ‘Spaghetti Junction’ where the boardwalks meet. Turn left and retrace your steps back to the A2 car park.

4. The flower meadows of Swaledale, Yorkshire 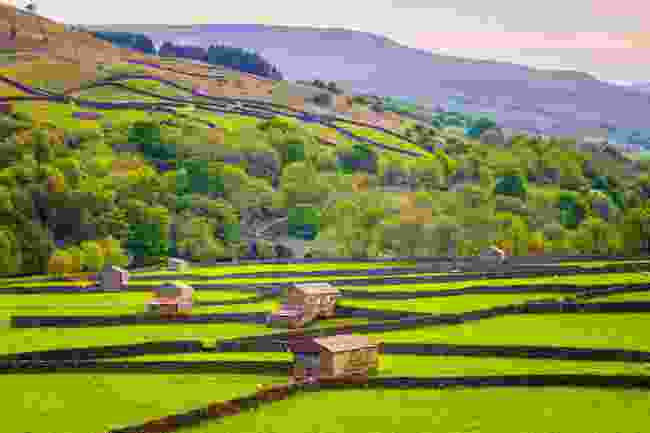 The hillside settlement of Gunnerside in Swaledale, Yorkshire (Shutterstock)

Nowhere in the Yorkshire Dales can match the beauty of Swaledale at the start of summer.

The hay meadows are filled with buttercups, cat’s ears and lady’s mantle. When the sun falls on the isolated valley, the fields glow golden in the soft light.

The six-and-a-half mile walk starts in the rustic village of Muker, laying claim to England’s highest pub, and finishes at the hillside settlement of Gunnerside.

Follow the River Swale as it flows between wildflower meadows, caught in the geometry of dry stone walls, and dotted with ancient stone barns.

From Muker, head north to follow the route of the Pennine Journey. Cross the footbridge and turn right through woodland to drop down to the River Swale.

Follow the river east to Ivelet Bridge, then the road up to Ivelet. On the edge of the hamlet, follow the fingerpost pointing the way to Gunnerside across the hillside, where you can stop for lunch at the tearoom or pub.

To return, take the hillside road west to Ramps Holme Farm, then the track that drops down to Ivelet Wood. A sharp left brings you to the footbridge. Retrace your steps from here to Muker along the Pennine Journey path. 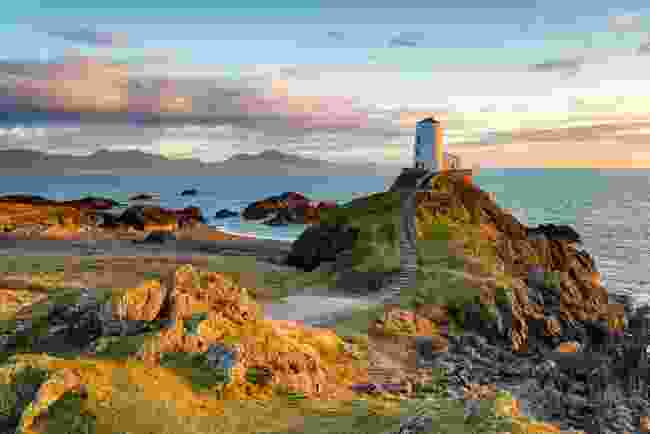 This small corner of Anglesey has much to offer: long curving beaches with views across to the Llyn Peninsula and Snowdonia, Newborough Warren with its soaring dunes, wetlands and a tidal island strewn with historic landmarks.

The four-mile walk leads the rambler through a landscape of sublime diversity that’s also rich in wildlife. In summer, the sky is filled with the song of the skylark, while red squirrels scoot up pines and along the forest floor, Expect to fall in love with this little-known area of Wales.

From Newborough Warren and Ynys Llanddwyn Car Park, head through the forest to  Llanfairpwllgwyngyll parking. Head out onto Newborough Beach and on to Llanddwyn Island.

Follow the western path along the length of the island. Soon, views of a hilltop cross and lighthouse come into view. Explore the ruins of St Dwynwen Church, named after the Welsh patron saint of lovers.

Drop down to the Pilot’s Cottages and Tŵr Mawr Lighthouse. This is as good a spot as any for some al fresco dining while boat and people watching.

To return to your starting point, follow the east path back to the beach, sticking to the shore this time to return to the car park. 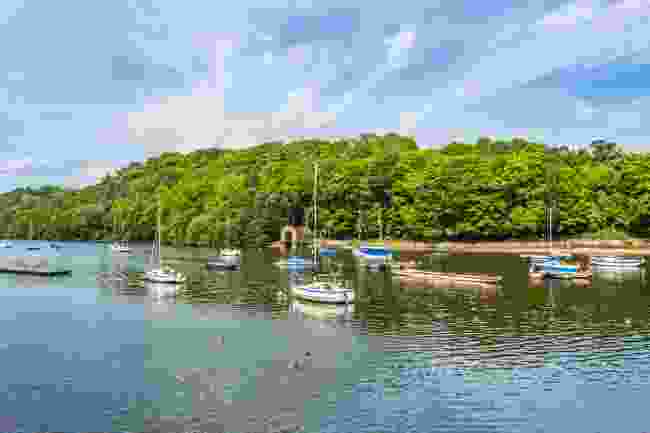 Everyone knows The Jungle Book by Rudyard Kipling, but few know of the lake the famous author is named after.

It’s the place where Rudyard Kipling’s parents courted. Rudyard Lake is actually a reservoir - though tucked into woodland, meadow and hillside, it has a natural feel to it. Only the damhead on the south side gives the game away.

Follow the Lapwing route along the water’s edge, across reedbeds and parkland, to take in a ruined Gothic hall and two Victorian boat houses (all open to the public) along the way.

The thick woodland provides delicious shelter on a hot summer’s day, too, while the water gives off a cooling breeze. Look out for herons, curlews and ringed plover on this five-mile ramble.

From the station car park (four miles from Leek), follow the pathway that runs alongside the miniature railway on the east side of the reservoir. Drop into the Victorian boathouse that serves as a small information point, chronicling the story of Rudyard Lake and its boating history.

At the top of the reservoir, turn left to cross parkland. Another left turn follows the route of the Staffordshire Way along the west bank. It climbs through woodland high above the reservoir before dropping down to the waterside again.

Visit the visitor centre in a second balconied boathouse and enjoy a snack at the waterside café.

7. Along the River Stour in Constable Country, Suffolk 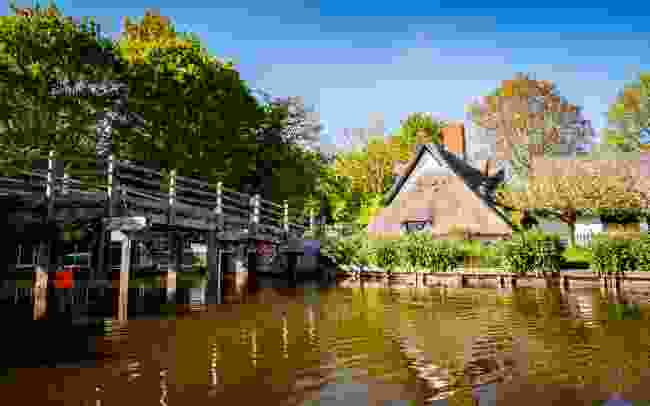 The Hay Wain by John Constable is one of Britain’s favourite pieces of art.

The painting of the River Stour evokes nostalgia: thatched cottages, quiet country lanes and lazy summer days on the river under an expansive sky of fluffy clouds. This three-mile river walk has all the romance of a Constable painting.

Start from Dedham, taking time to visit St Mary the Virgin, notorious for its deafening bells. Cross the footbridge and follow the riverside pathway east Cross Fen Bridge, the river now on your left. Look out for kingfishers on the water’s edge.

Explore the village: Flatford Mill with its attached 17th century miller’s cottage, the mill pond and Willy Lott’s Cottage - the scene of the Hay Wain. Drop into the John Constable Exhibition, too: the romantic landscapes of the Stour recognisable from your walk.

Enjoy a snack and drink at the National Trust tearoom before retracing your steps along the river. This time, stay on the south bank of the river at Fen Bridge before crossing meadows to Dedham Hall and the village.

More of the UK's prettiest walks:

9 fabulous walks through the glorious Cotswolds

The Lake District's most challenging and exciting walks

The best walks through the Yorkshire Dales