South-East Asia packs in fuming mountains, iconic temples, electric cities and beautiful beaches. From Bali to Bangkok, here's how to get the most out of this diverse and wonderful region...

Bali to Bangkok - it didn’t look that far on the map. But I had no idea, and what a blessing that turned out to be.

Arriving unprepared, with just a few hundred dollars and a ticket home in my pocket, was the best preparation for a long but unforgettable journey on bumping buses, clanky boats, jeeps and trains through a region of astonishing diversity: towering temples topped with Buddhas and Blade Runner cities, of smoking Mordor landscapes, idyllic palm tree-shaded beaches and fish-teeming reefs.

On my first night in Ubud, I joined an established travellers’ trail across Java, Sumatra and Malaysia into the Thai islands. I made countless friends along the way. There was Naomy on a jungle hike in search of orangutans in Bukit Lawang, Glen laughing under the stars in a beach bungalow in Ko Pha Ngan, and Rashida, the concierge in a Singapore five-star who allowed me to take my camera up to the presidential suite for a magical view of the space-age skyline.

I still remember the smells: frangipani blossom and sea salt on a breeze-warmed Malaysian beach; lemongrass wafting from street-side food stalls in Chiang Mai; the wintergreen and cajeput oil a masseuse used to soothe my muscles after a hike to see the sun rise behind the smoking caldera of Mount Bromo.

I remember the taste of tamarind juice after a hot cycle ride through the backstreets of Bangkok, the sight of the ferry chugging past the volcano at Krakatau, the saffron-clad monks holding out their begging bowls in the morning markets…

But with South-East Asia, there always seems more to discover, another temple, another city, another route, which is perhaps why I can’t keep away. With bucket-shop-cheap regional air fares, it’s never been easier to join the travellers’ trail for as long as a month or as little as a week. 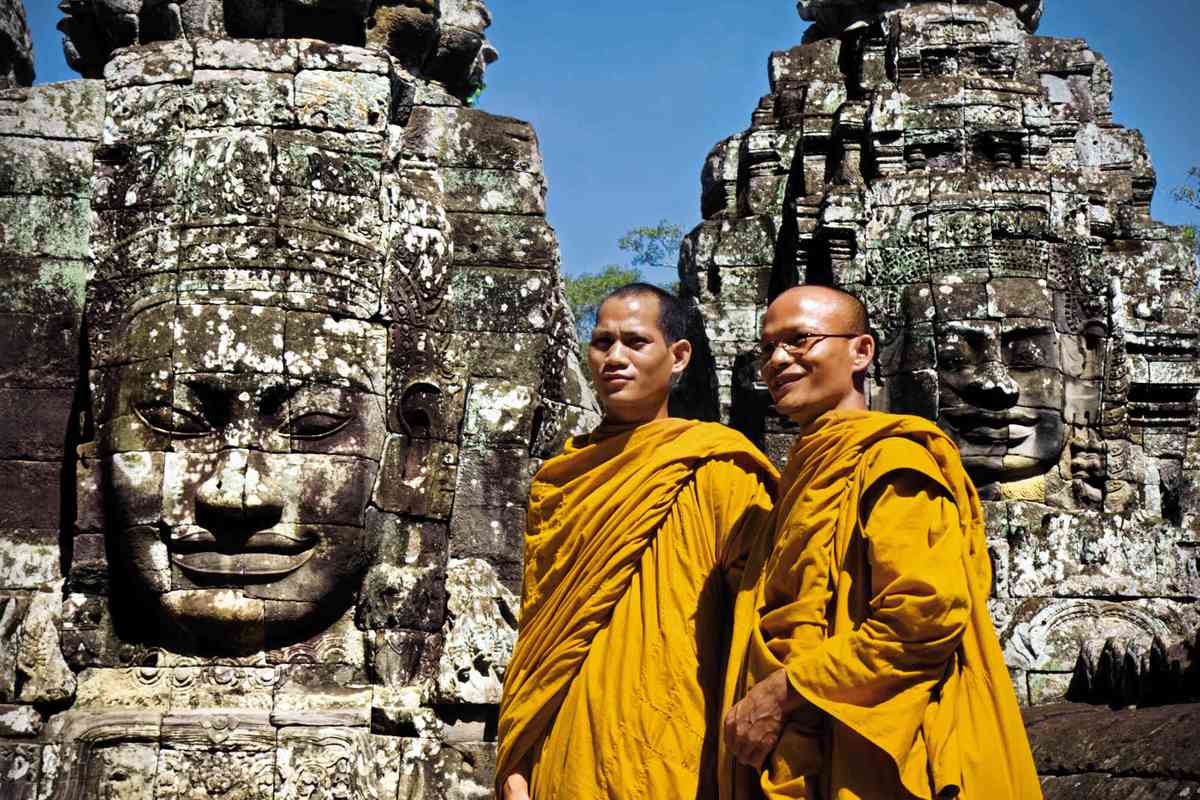 Why do it? With lush landscapes, romantic ruins and empty beaches, these neighbouring countries are as easy to navigate as Thailand but cheaper and less touristy.

Begin in Hanoi, whose streets of wooden shop houses cluster around two gorgeous lakes. The forest-covered pinnacle islands and turquoise seas of Halong Bay are an easy two-day excursion but book an overnight cruise in a converted junk to get beyond the crowds (through one of Hanoi’s myriad agencies).

Then catch the nighttrain south to Hue, whose forbidden walled 'Purple City' was the home of Vietnamese emperors. After a day, hire a driver for a road journey past sandy coves and shimmering lagoons and over the heady Hai Van Pass (the café at the top has wonderful views) to Hoi An.

This is Vietnam’s Venice, where sigh-inducing bridges span canals lined with terracotta-roofed houses and boatmen in conical hats offer languid river tours. Take one at sunset for a romantic atmosphere.

Then fly to from nearby Da Nang to Siem Reap in Cambodia (90 mins, visas on arrival, $30 cash only) for the jungle-tangled Angkor ruins. Wind up with a few days on unspoilt Koh Rong, easily reached by a twice daily ferry from Sihanoukville (a 60 min flight from Siem Reap).

Eastern Thailand and Laos: Over the hills 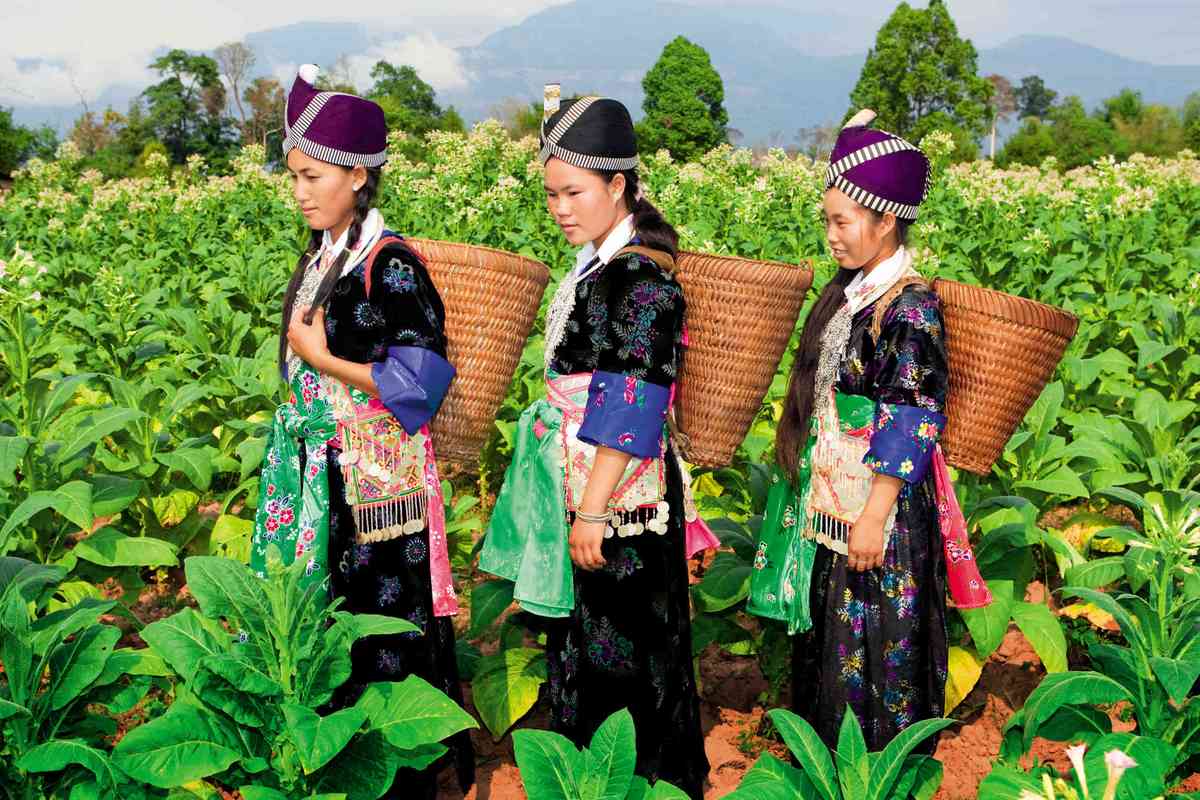 Why do it? This route takes you through the forests of Eastern Thailand, into the woodland and mountains of ancient Laos and one of Asia’s loveliest cities, sitting on the banks of the mighty Mekong River.

From Bangkok, it’s a three-hour taxi drive (£48) to the rainforests of Khao Yai National Park, the best place in the region to see gibbons, hornbills and (if you’re lucky) tigers and wild elephants. Stay five-minutes from the park entrance at Baan Saranya bungalows, then bus north to Nong Khai on the border (7 hrs).

From here, it’s an easy over-the-bridge crossing into Vientiane, the Laos capital. Rent a bike (1.50p/day) and cycle the city’s temples and Mekong riverbanks before catching a plane to Luang Prabang (45 mins).

This is one of Asia’s most enchanting small cities, set in a steep valley cut by the chocolate-brown Mekong, glittering with temples and French teak mansions and bustling with hill-tribe markets.

Take four days to hike in the hills (to Hmong villages and mountain waterfalls); boat up the Mekong to caves filled with Buddha statues; and climb the dragon staircase on Mount Phousi at sunset for views of temple roofs and rippling mountain ridges silhouetted against an orange sun. 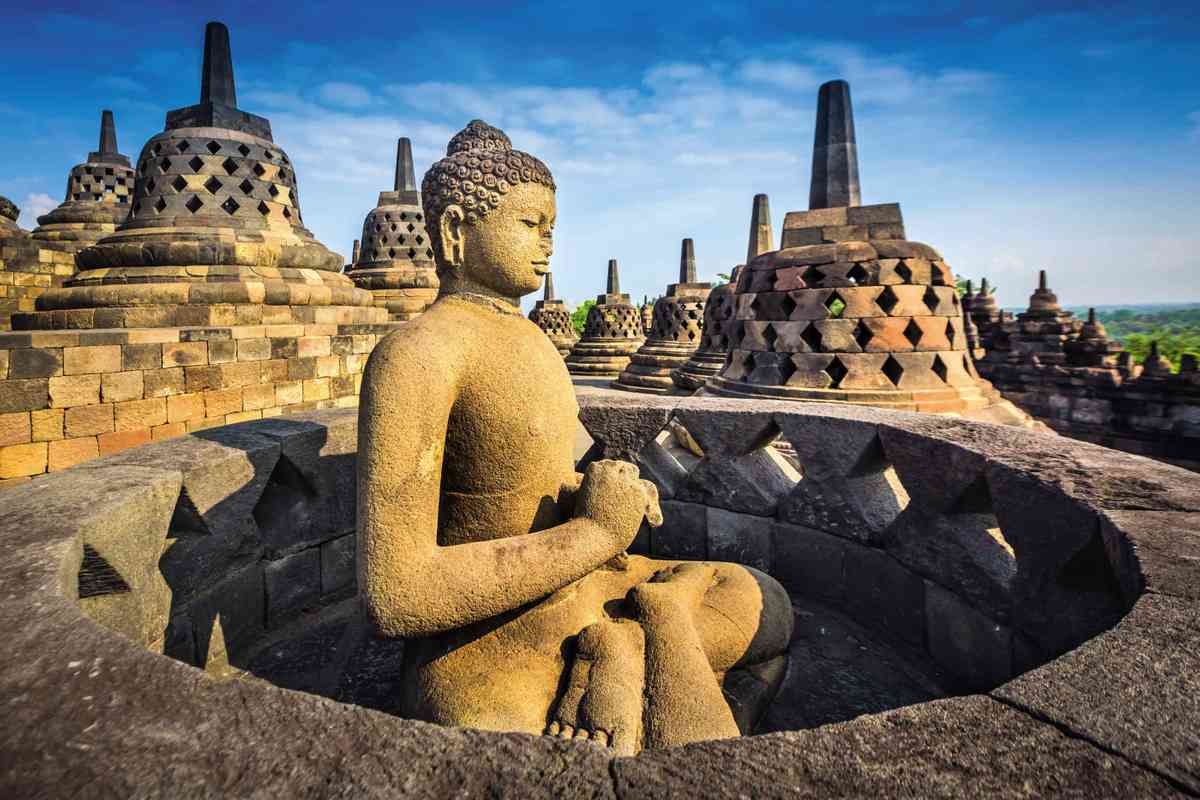 Best for: The highlights

Why do it? The best of South-East Asia at a bargain price? It’s possible with an ASEAN Airpass (from £130 plus taxes) covering all major South-East Asian cities.

Enjoy thick iced coffees and baguettes on tree-lined boulevards around Vietnam’s Notre-Dame cathedral; whizz through the streets on a motorbike tour with the irrepressible, all-female Xotours; and take side trips to the island-cut Mekong Delta and haunting Cu Chi tunnels, the underground system where the Viet Cong would spend days at a time during the Vietnam conflict.

Fly two hours south for a day in Kuala Lumpur (to admire the views from the Petronas Towers and market-browse) and another 2 hrs 30 mins on to Indonesia’s Yogyakarta. This old royal capital is the best base for temple day trips: to Borobudur, a Buddha-heaped artificial hill ringed with steaming volcanoes, and Prambanan, whose stupas are covered in astonishingly detailed carvings of Hindu gods. Finish with five laid-back beach days in Bali’s Crystal Bay with excursions to the green paddy fields and craft shops of Ubud. 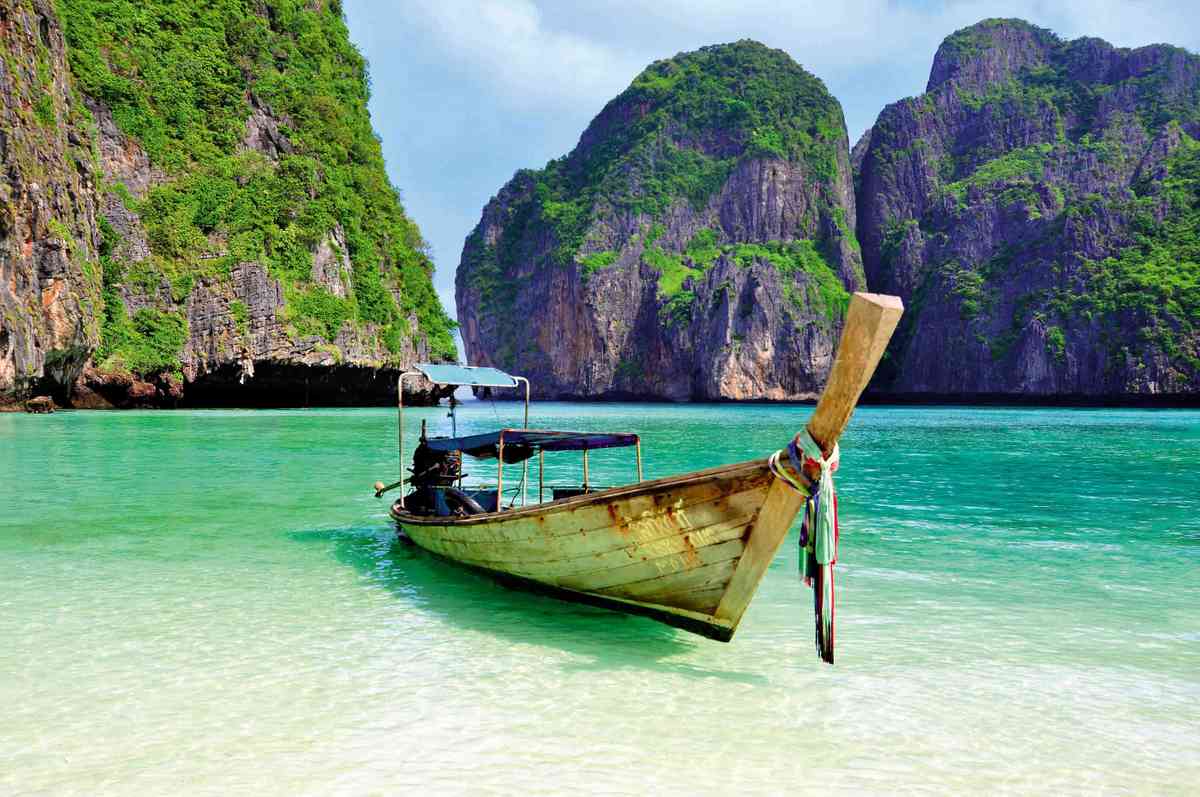 Why do it? With creamy beaches, tantalising temples and sumptuous food, Thailand is South-East Asia in miniature. It’s so easy to get around, it makes the perfect introduction to the region.

This route reveals the real Thailand. Begin with a plunge into old Bangkok on a stroll through the marigold market on the banks of the Chao Phraya River. Visit Chinatown and the solid-gold Buddha in Wat Traimit before catching the night train to Sukhothai, Thailand’s ancient capital (7hrs to Phitsanulok station, 40 minutes by taxi). Spend a day wandering the bird-filled Historical Park, passing crumbling chedis (stupas) and giant Buddhas.

Then it’s back on the train to Chiang Mai (7hrs). Three days is enough for Thailand’s northern capital, with an excursion up Doi Inthanon and a trek to hill-tribe villages or a spot of white water rafting. Then you’ll be ready for Ko Pha Ngan (for backpacker beach bungalows, 1hr 45 mins flight to Koh Samui and 30mins boat) or Koh Tao (for reef snorkelling or diving, 75 mins boat ride from Ko Pha Ngan).

Myanmar: The road to Mandalay 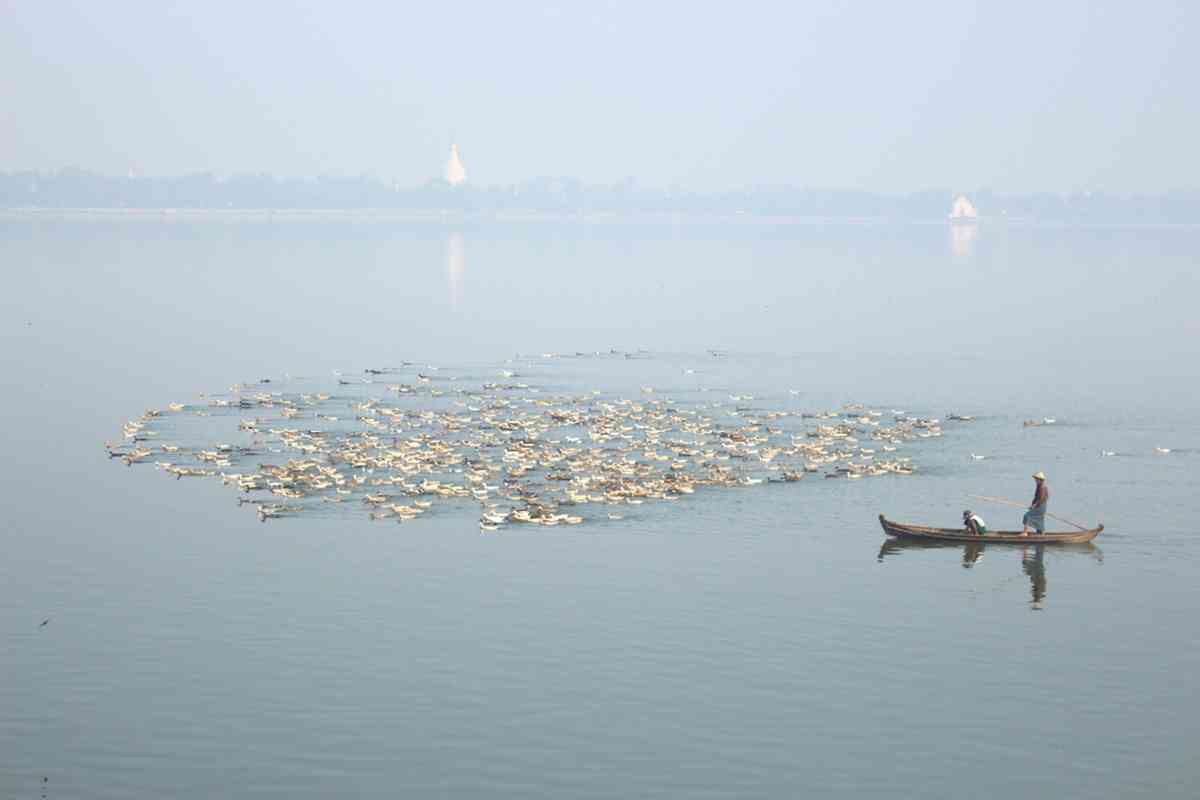 Best for: South-East Asia as it used to be

Why do it? Closed to the world until 2011, Burma (Myanmar) feels lost in time and unspoilt by outside influences

Allow a day for the old capital Yangon. There’s only one site of real interest, the Shwedagon Pagoda, but it’s genuinely spectacular. Come at dawn to see local people and maroon-robed monks make offerings at the myriad shrines. Then brave the bumpy 10 hr night train to Mawlamyine, Rudyard Kipling’s favourite Asian city, whose temples and colonial houses clamber over hills next to an expansive river delta.

You’ll have to transit through Yangon again to reach Bagan (80 mins flight or a rough 8hr bus ride). Spend two days wandering this vast plain, speckled with stupas before catching the bus to Monywa (4 hrs). You’ll need a day and a private taxi (around £50) to see the art-filled caves, giant Buddha statues and temples around the town.

Then take the road to Mandalay (3 hrs by bus), sitting on the left for the best views of the Irrawaddy River. After two days exploring the palaces, teak-wood bridges and temples, take the bus south to tranquil Inle lake (8 hrs), nestled in a bowl of craggy mountains and dotted with floating villages.

Taiwan and The Philippines: The undiscovered countries 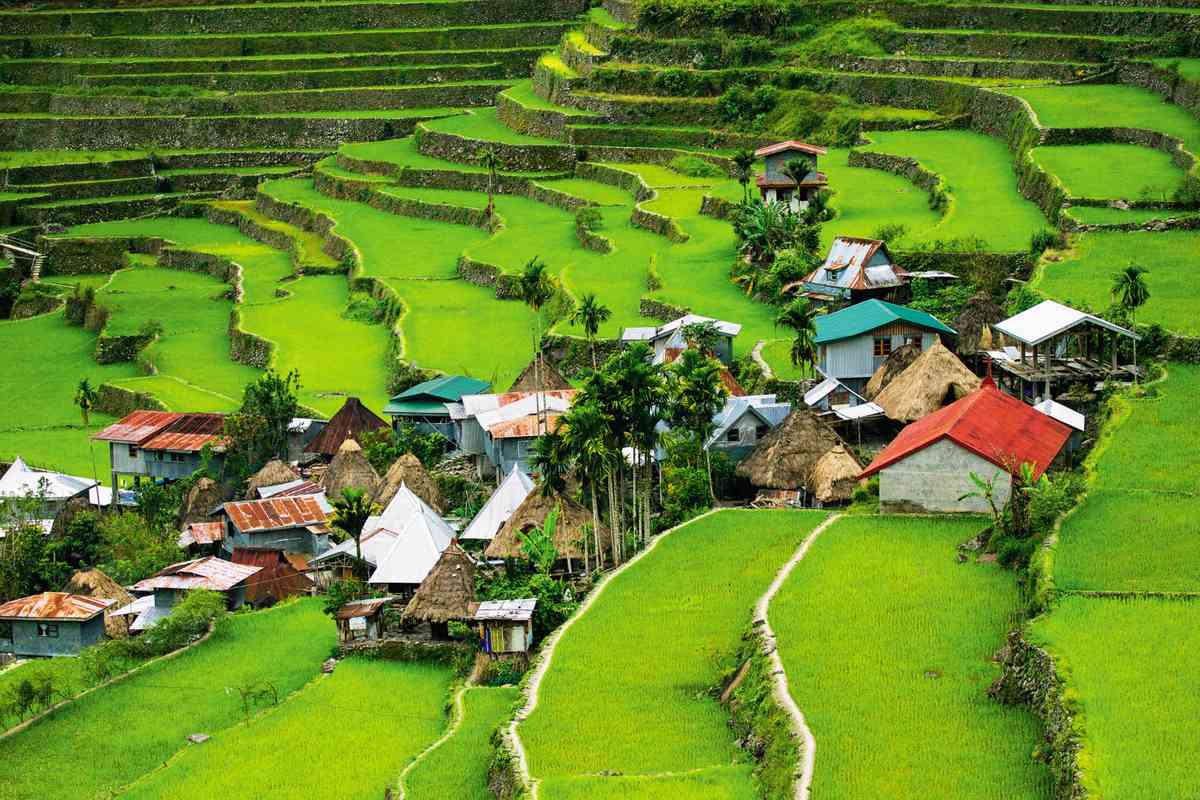 Best for: Coral reefs and canyons

Why do it? Charmed with vibrant local cultures, mountains terraced with rice fields, plunging canyons and coral islands, somehow these neighbouring countries remain quiet and unspoilt.

Chinese treasures at the National Palace Museum before catching the train for two days in Hualien (2 hrs 30 mins), the gateway to the spectacular Taroko Gorge. Hike and bike this 3km-deep marble canyon, which cuts into the island’s central mountains, then move on to Manila (via Taipei, 2 hrs 15 mins flight).

An afternoon’s enough to see the colonial-tinged centre, before boarding a bus into the Cordilleras region, driving past the smoking crater of Pinatubo to Banaue (9 hrs).

Allow three days to explore the rice terraces, then fly to the beach in El Nido, Palawan (I hour from Manila), where coral-filled bays fringed with pearl-white sands are broken by wind-sculpted rocks and craggy cliffs. 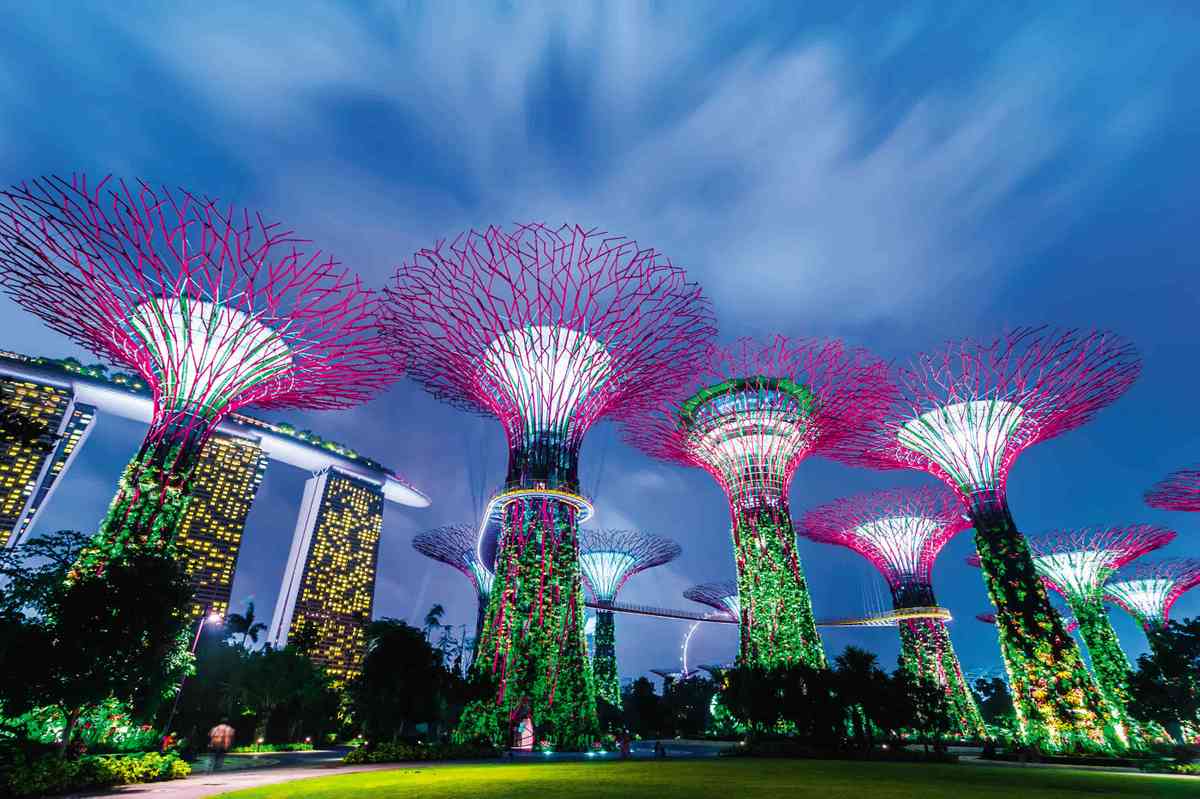 Illuminations at Garden by the Bay, Singapore (Dreamstime)

Why do it? Old meets new in South-East Asia’s mega cities, where skyscrapers loom over teak houses, ancient mosques sit next to sleek monorails and temple-dwelling orange-robed monks watch YouTube on the latest Samsung Galaxy.

Ride the public boat up the Chao Phraya River, past the mosaic-covered Wat Arun temple to the sprawling Grand Palace complex. Eat on the street or at Gaggan (eatatgaggan.com) voted ‘Asia’s best restaurant’ in the 2015 San Pellegrino awards, and shop at Chatuchak weekend market, the biggest arts-and-crafts smorgasbord in South-East Asia.

Then catch the morning train to Kuala Lumpur (5 hrs via Butterworth). While in town, take the elevator up the 421m-high Kuala Lumpur (KL) Tower for views, sample Malay street food around Jalan Alor and visit the Hindu mountain caves at Batu.

Then hop south to Singapore (70 mins flight) for a splurge. Sip Singapore Slings in the Raffles Hotel, sample the Japanese food at Michelin-starred Shinji. Walk the 50m-high Supertrees and sky walks of Gardens by the Bay, and be in the Lantern Bar on Collyer Quay at dusk to see the city burnished gold by the dying sun and the lights of the $5.5 billion Marina Bay complex glisten in the water.

Malaysia and Indonesia: On the wild side 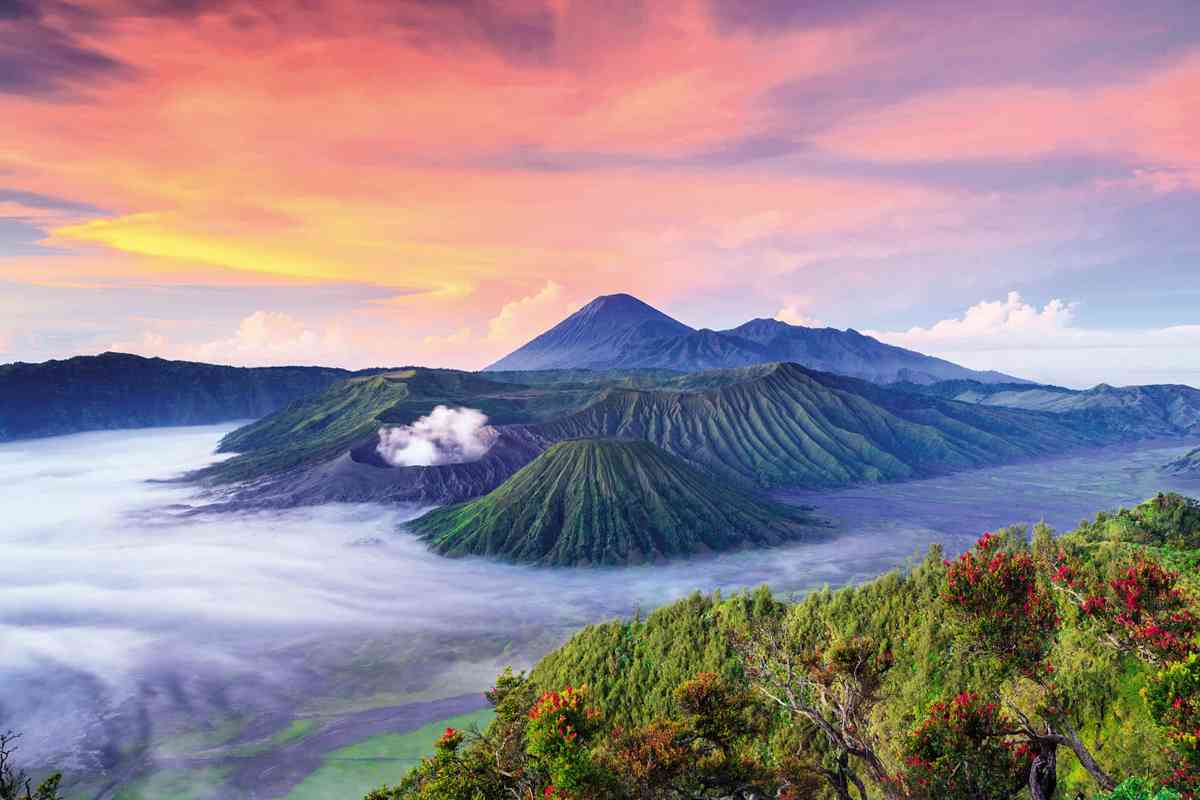 Best for: Volcanoes, forests and orangutans

Why do it? A plane hop through Malaysia’s central highlands and Indonesia’s Sumatra and Java islands offers the pick of South-East Asia’s spectacular landscapes, with pristine rainforests and fuming volcanoes. From Kuala Lumpur, catch the bus to Tanah Rata in the Cameron Highlands (4hrs) for two days trekking in primeval tree-fern and pitcherplant-filled rainforest.

Then catch the bus to Penang (3 hrs) for a day’s street and hillside wandering and a ferry to Medan in Indonesia; whose forests (reachable from Bukit Lawang, a 50-minute bus from Penang) are the best place outside fire-ravaged Borneo to see orangutans. After two days, fly south to Surabaya on Java (3hrs), the gateway to the impressive Bromo-Tengger-Semeru National Park (in Probolinggo, 2hrs bus ride south of Surabaya).

Wake at dawn for the best views of an avenue of fuming volcanoes under pink-hued sky. Fly to Lombok (1hr from Surabaya) for more spectacular, smoking mountains and a blissful few days on the white-sand beaches and turtle-spotting opportunities of the Gili Islands off Lombok’s northwestern coast (reached by fast boat from Senggigi village – 1hr by taxi from Lombok airport).